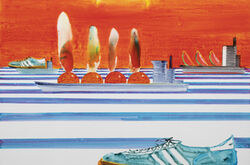 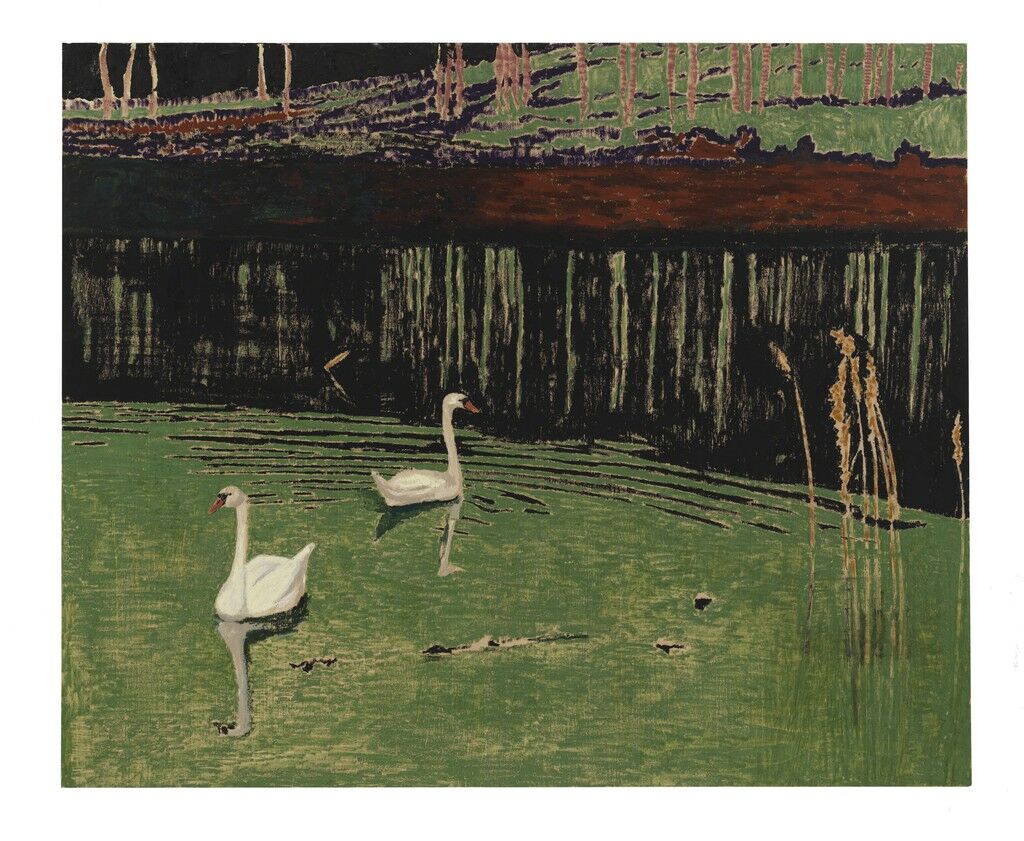 This autumn, two of Scandinavia’s top painters joined forces to produce “Svanesang,” or “Swan Song,” two parallel exhibitions recently on view at Galleri Bo Bjerggaard in Copenhagen and Galleri Magnus Karlsson in Stockholm. Tal R and Mamma Andersson forged this creative exchange by visiting each other’s studio and sending photographs back and forth in what they call a “dialogue through images.” The collection of images then served as inspiration for their individual works spread between the two galleries.

We caught up with Tal R and Mamma Andersson to talk about their pen pal–like relationship, the personal surrender that’s required in collaboration, and why no one should paint Elvis Presley—or a swan. 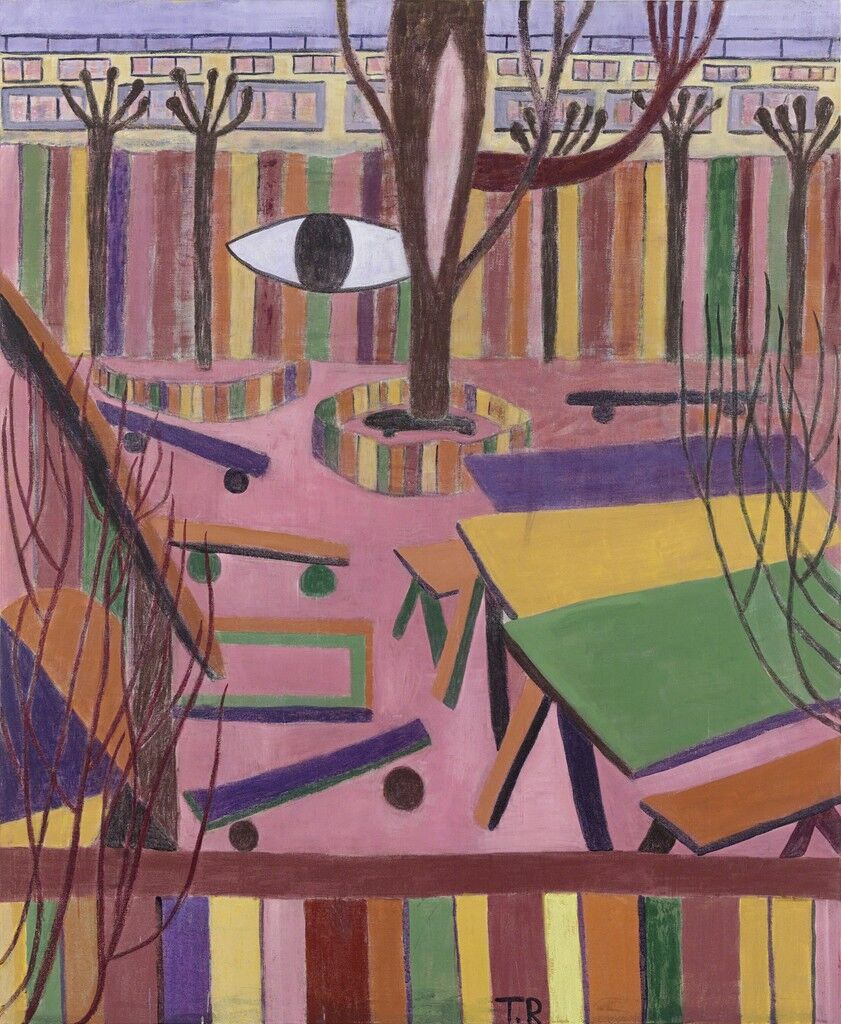 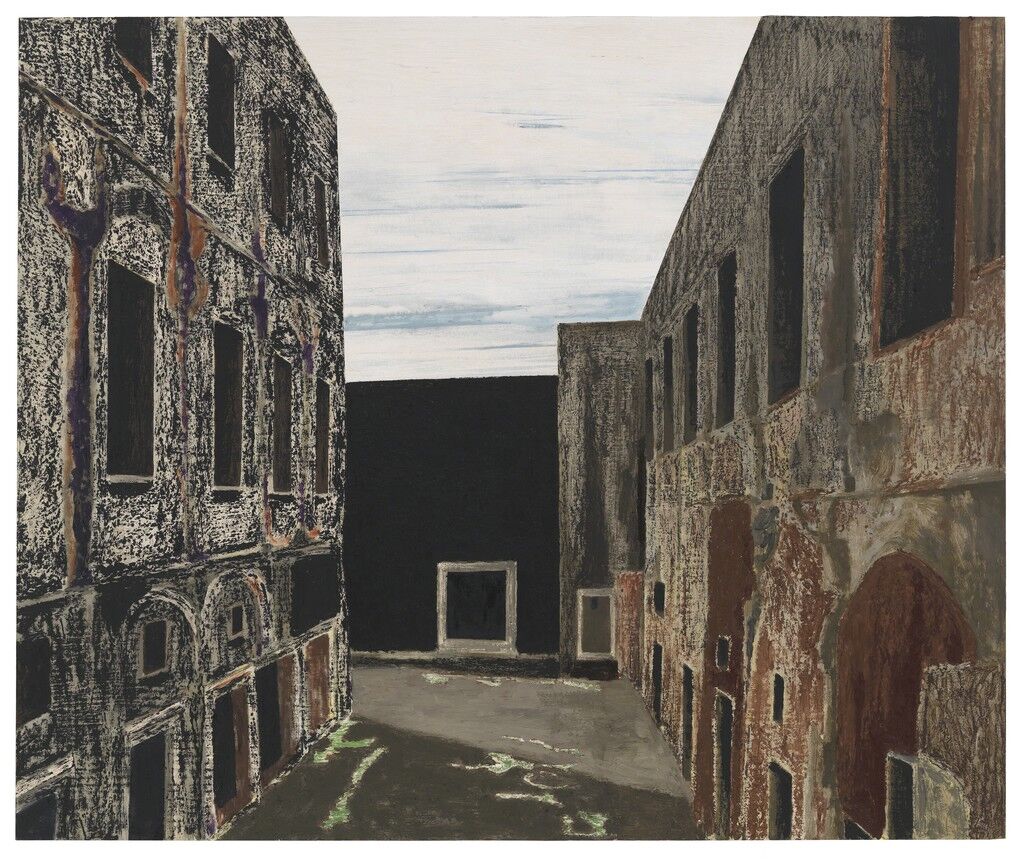 Artsy: You’re both considered leading painters in Scandinavia. How did your creative relationship begin?

Mamma Andersson: It is not easy to answer when it all began. We have both been interested each other’s work for a long time, actually since the late ’90s. Both Tal and I have curated exhibitions. When Tal curated “Huts,” an exhibition for the Douglas Hyde Gallery in Dublin in 2004, he included my work. When I curated the exhibition “Stargazer” in 2013 at Sven Harry’s Art Museum in Stockholm, I presented sculptures and drawings by Tal.

Tal R: It began just being friends, and by having an interest in and a respect for each other’s work. And we were approached about doing a show, but we thought that we wanted to challenge the situation more. Instead of just putting our works in the same room, we decided we wanted to look in each other’s pockets, which means source material. So that’s how it started. 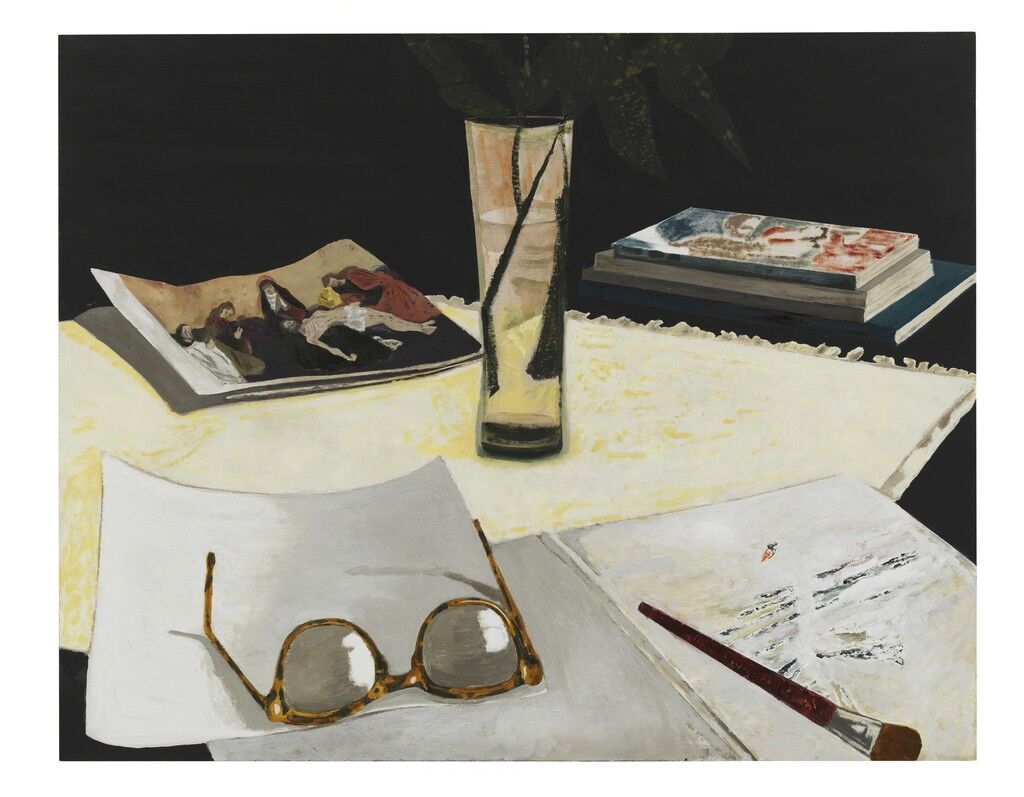 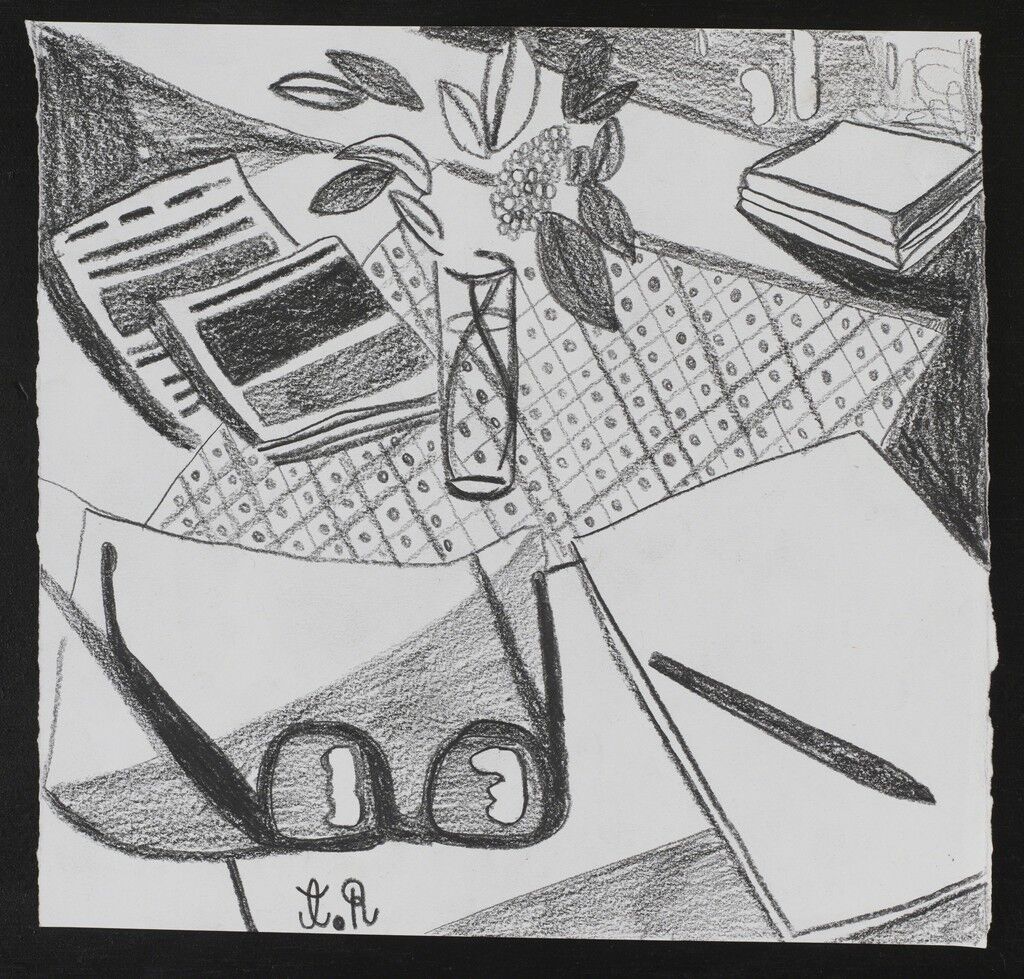 Artsy: This exhibition is the result of a somewhat unconventional collaboration. Tell me more about that creative exchange.

Mamma Andersson: We actually didn’t know each other that well before this collaboration. Before this we had just met now and then, nothing more than that. Last summer, in 2015, we met in Copenhagen together with our gallerists Bo Bjerggaard and Magnus Karlsson. The idea was already there, but only as a kind of fantasy. There and then we decided to do two shows together in a year, i.e., in 2016, one in Stockholm and one in Copenhagen.

Tal R: We knew that we wanted to do an exhibition. She visited me in the studio, I visited her, and we picked up a lot of material that we thought both of us could use. I picked up stuff from her studio—images—and I thought maybe I could work with the same images. She did the same with mine.

In the middle of the process, we were both quite scared. It turned out not to be that easy. I mean, it’s not that difficult to find an interesting image, to make an interesting painting. But to really connect to an image, it needs to be more than interesting; something deeper needs to happen. You need a deeper motivation than “this is interesting.” And therefore a lot of the material that I found, in the end I couldn’t really do it. If I tried working with some of those images I found, I would find myself in a situation of trying to solve something in a formal way. And I don’t like that kind of ballgame. I like when the process is more driven, when it means something or echoes something you might have experienced that is important to you. 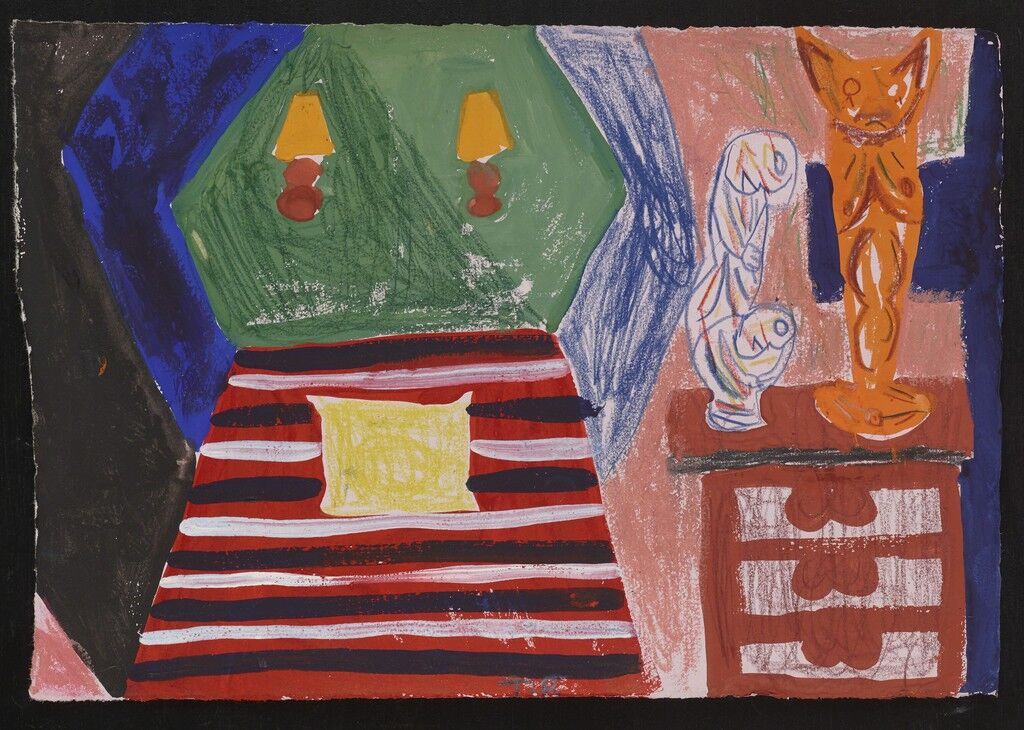 Artsy: Your exchange included sending each other photographs. Did some of these photographs form the basis of any of your paintings, or did they serve only as creative inspiration?

Tal R: There were tons of images. We made a collective pool of images. Painting is serious business. You can not just do what you want. That means that some of the images we used, we both tried to make versions of that image, and sometimes I couldn’t do it, or she couldn’t. But all of these works come from the same pocket of images—our collective pocket. 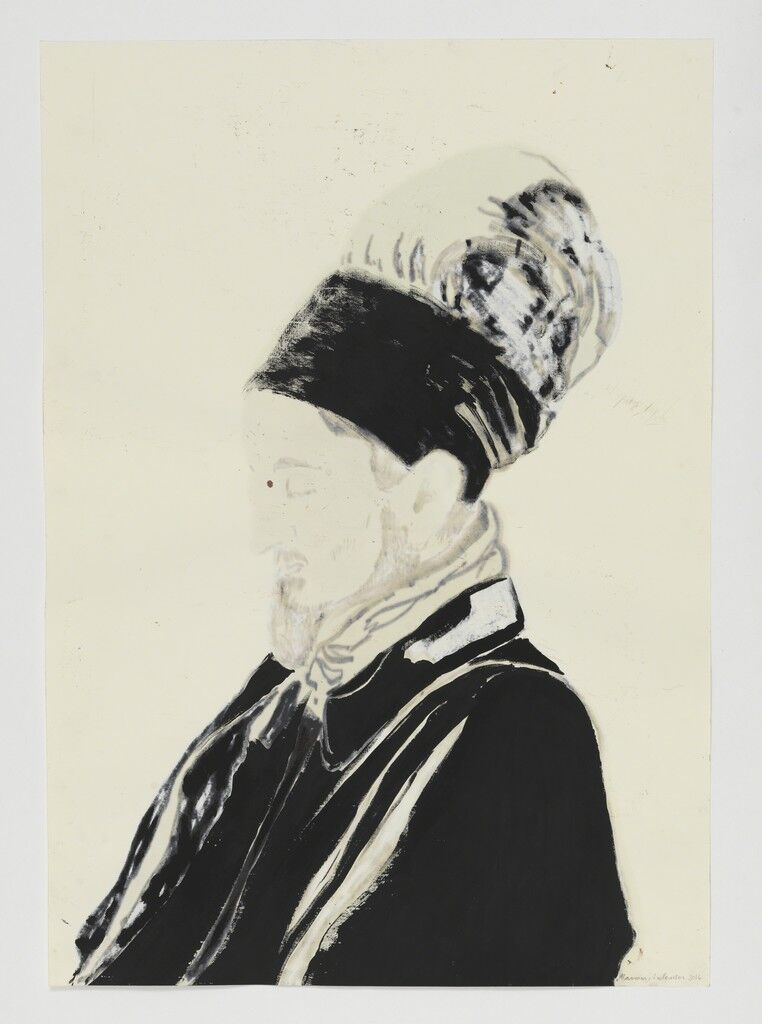 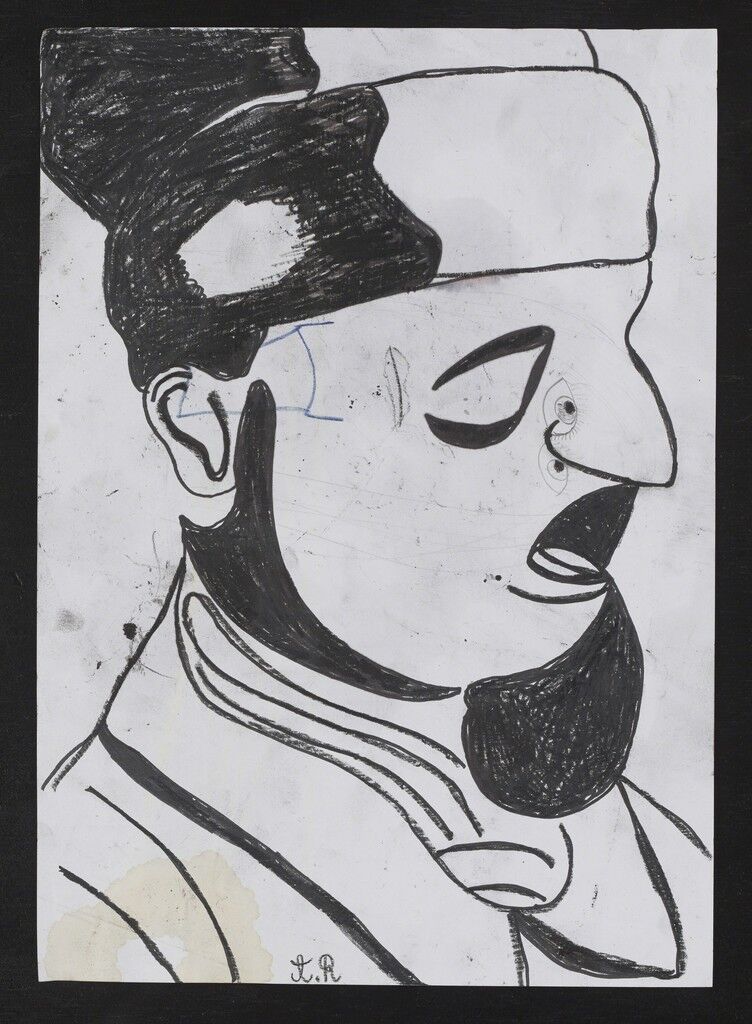 Artsy: Although you worked together on the exhibition, each painting was created by a single artist. How did you retain your individual creative integrity while collaborating?

Tal R: You don’t. You get destroyed when you collaborate. When an artist is in his own studio, he tries all kinds of methods to destroy his expectations and what he imagines, so that he can create even more fantastic stuff. When you collaborate, it’s a way of destroying yourself and the other. And you do this to find images you couldn’t imagine before. That’s why you do it. You don’t do it for the name, or for friendship, even. You do it because you want to get destroyed in a productive way.

Mamma Andersson: Actually, it is a rather hopeless idea to do an exhibition with two narrative figurative painters. The idea is so stupid that it can be good.

We’re both autonomous artists. In general, we would probably not compromise in any way at all regarding anything. This was something we already knew from the starting point. So there was no way that both of us were going to work on the same canvas or panel. However, we realized that our sources of inspiration often relate to one another.

There are five years between us in age—we are children of postwar times, and we have similar experiences when it comes to world politics and culture. And we have similar feelings and preferences on the history of art. This was our point of departure and our fuel.

Another thing we have in common is our passion for the craft itself, painting and its methods. During this past year, we’ve sent pictures to each other and we have met in our respective studios. We have been very generous to each other with our private inspiration and process, which one normally doesn’t like to share.

Some images have stuck and started a common process. Sometimes it has just been one of us wanting to continue with a special picture, and then it got to be that way. Some themes soon became more interesting than others—usually things that we both were a little afraid of, such as skeletons and swans, as they are fairly worn out symbols. Maybe this was something we gave each other an alibi for, so we could blame the themes on each other. 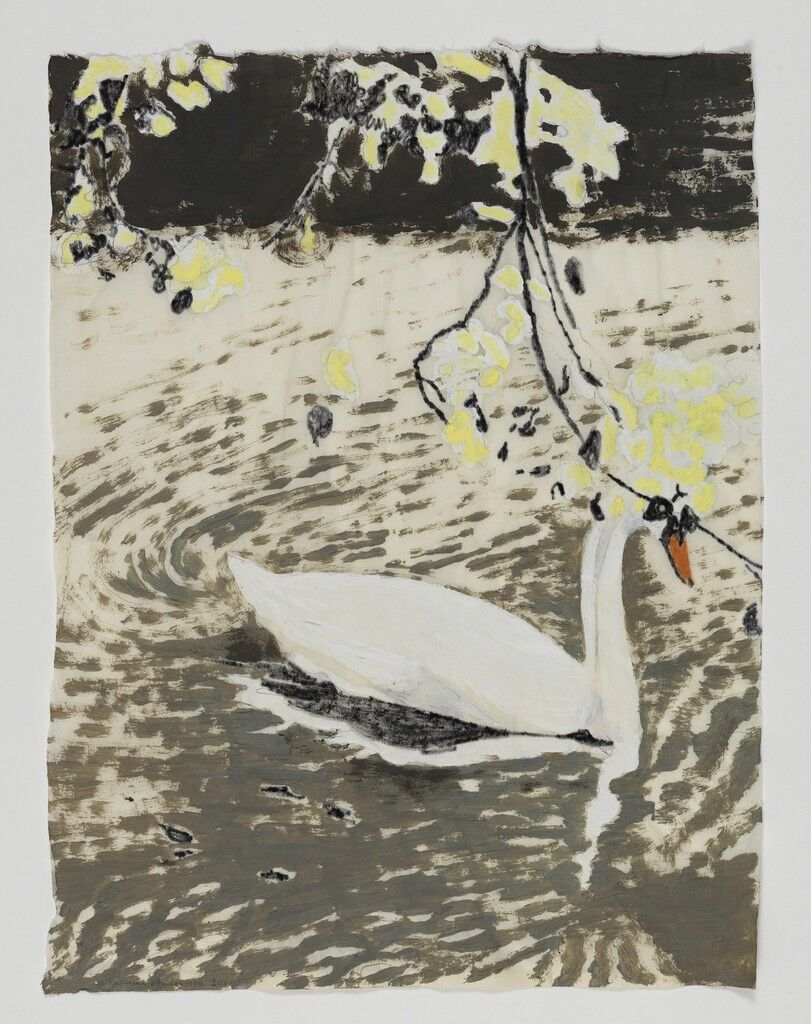 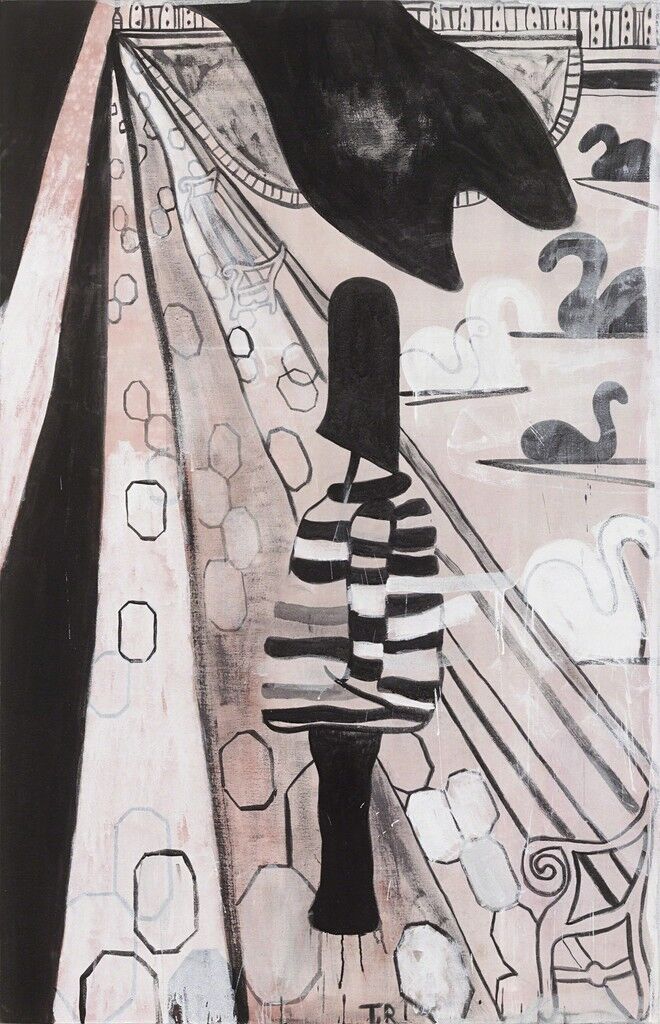 Artsy: The title of your show is “Svanesang,” or “Swan Song.” Is the title a reference to retirement? Will this be a final exhibition for either of you?

Mamma Andersson: When it comes to the title, I would say that it has to do with the state of our images [rather] than with any private condition. I’m confident that we both intend to keep on working for a while with our art, so this is not by any means a definitive ending point.

Swans, of course, have this beautiful “S” shape. If you just make an “S” and ask, “What kind of bird is this?” then people are going to say it’s a swan. But in Scandinavia, well, it’s a mistake that we have swans here. Swans are like flamingos: They shouldn’t be in this part of the world. It’s a miracle. And to paint them is a disaster. It’s the best idea and it’s the worst idea. In opera, the “swan song” is the last song before the curtains go down, before everything ends. So it’s playing with the idea that this might be a major mistake. It might be a disaster.