Siona BenjaminExodus: I See Myself in You, 2016. ACA Galleries

An intriguing range of cultural symbols appear in the work of Siona Benjamin. Take Finding Home No. 46: “Tikkun ha-Olam” (2000). The central figure, blue-hued and many-armed, is stylized like a Hindu goddess, but her arms form the shape of a seven-branch Menorah.

Beside the goddess-like form is Hebrew text, delicate, painted in delicate gold. The script spells out Tikkun ha-Olam, a phrase that translates to “restoration of the world” or “repair of the world.” It’s an important concept in the Kabbalah, and a guiding principle in Benjamin’s practice. 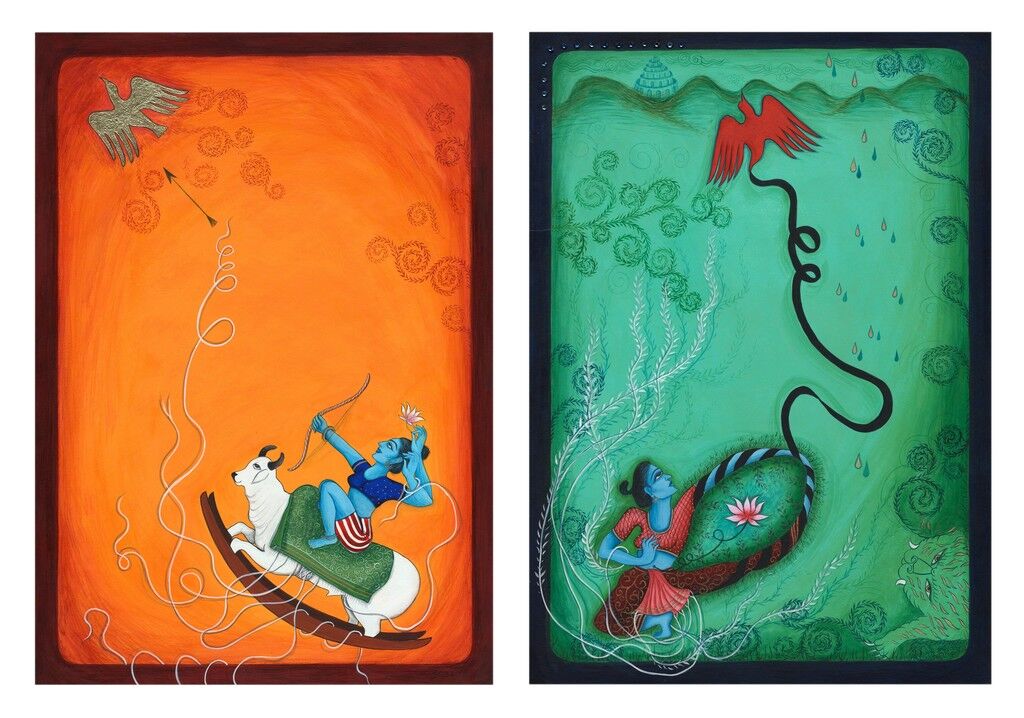 It makes sense that the artist is inspired by the idea of making the world a better place: she’s seen a lot of it. Benjamin, born in Mumbai, is a descendant of the Bene Israel, a historic Jewish community in India. She attended Catholic school, and later married an American man who was born into a Russian Orthodox family but converted to Buddhism. They live in New Jersey, but Benjamin isn’t in the US at the moment: she’s at the Bezalel Art Institute in Jerusalem, on her second Fulbright Fellowship, conducting research on transcultural Indian Jews in Israel.

Benjamin’s practice reflects all of these cultural influences. “Beyond Borders,” the artist’s first exhibition at ACA Galleries in New York, features recent works from her “Exodus” series. From a stylistic perspective, the paintings bear resemblance to the traditional art forms that have long inspired Benjamin: Exodus: I See Myself in You (2016) is reminiscent of the gilded icons of Byzantine art, while the individual paintings that form the polyptych Fereshtini #6-9 (2007) call to mind Persian miniatures. 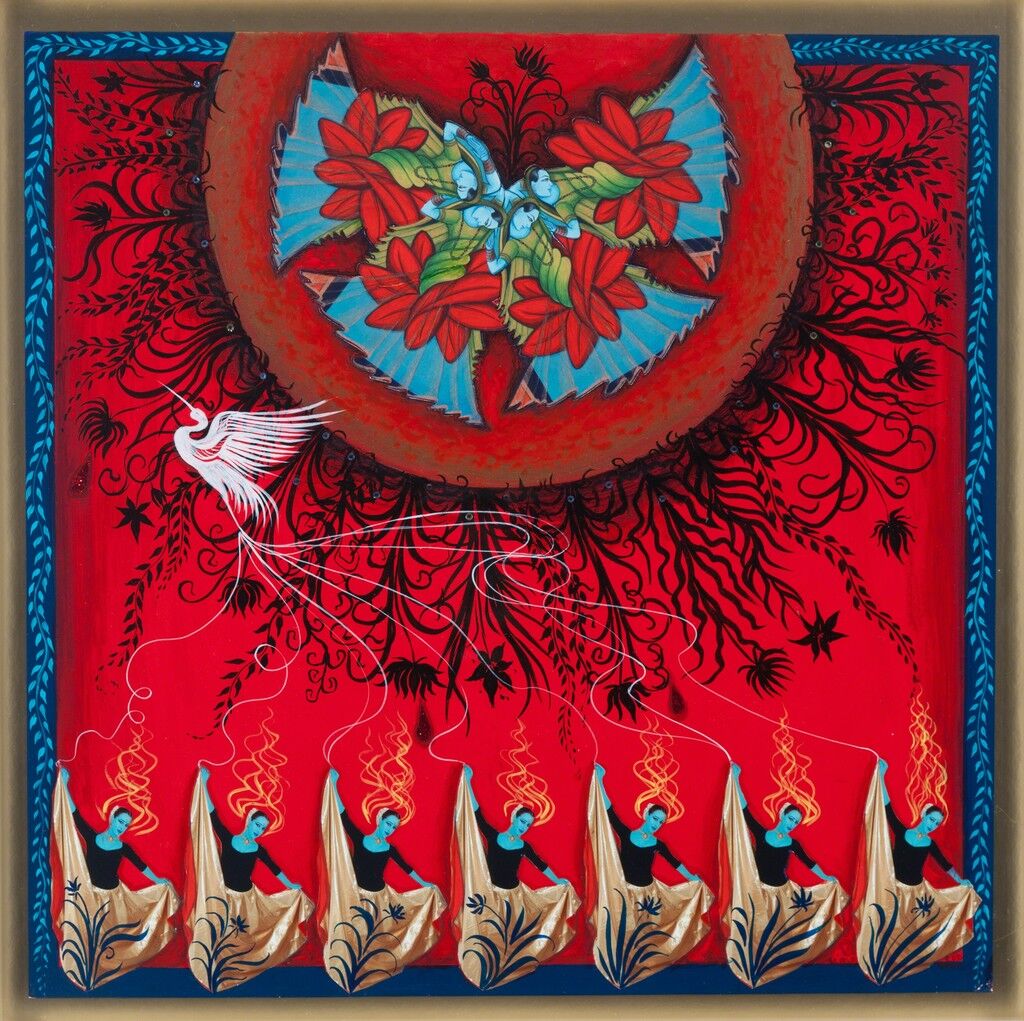 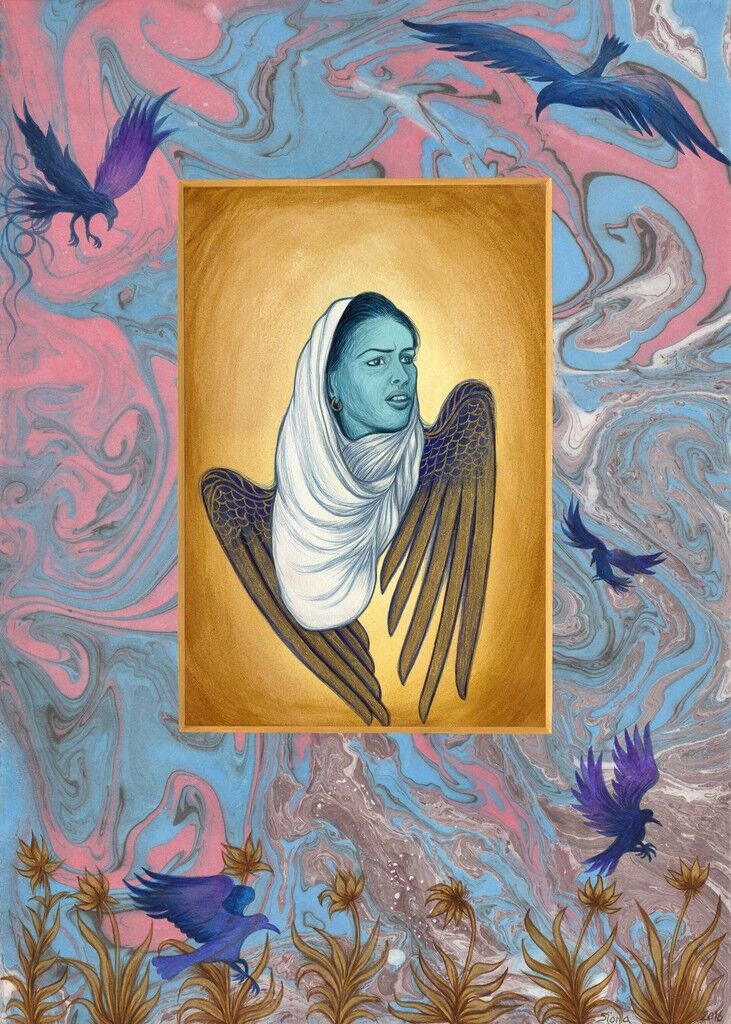 What they all reflect—and what they all have in common with Benjamin’s earlier works—is the artist’s exploration of cultural identity. “I have always had to reflect upon the cultural boundary zones in which I have lived,” Benjamin has said. “In this transcultural America, I feel a strong need to make art that will speak to my audience of our similarities, not our differences, as I feel I can contribute to a much-needed repair (Tikkun) through my art. I would like my audience to re-evaluate their notions and concepts about identity and race, thus understanding that such misconceptions could lead to racism, hate, and war.”

Her paintings pose questions about borders, both physical and otherwise: where exactly does one culture end and the other begin? Benjamin doesn’t know. Her ongoing journey as an artist is motivated, in part, by the impulse to find a home in the world—and at the same time, to remain untethered to any one group, to drift between them, like one of the women flying or floating through the frames of her richly layered paintings.