A Medium of Disjunction

Collage is often thought of as a medium of disjunction and the shock of unrelated forms clashing against each other. But collage can also be about the careful fitting together of unrelated parts to add up to a new cohesive unity. Gardiner's collages fall into the latter category where the forms and color systems she employs are governed by a painter's eye that looks for resonant relationships. This is evidenced by the compositions' linear structures where the edges of one form moves along a certain trajectory that connects to the linear movement of adjoining forms and at the same time creates the containment of negative spaces that teeter on becoming positives.

Gardiner's collages play various opposites or dissimilars against each other such as photographic images of bits of figures against reproductions of paintings, often Cubist paintings. The figures might be photographs of actual persons or reproductions of sculpted figures in stone: a part of a torso, a leg or arm, always anonymous, always formal. In fact, the actual imagery on the paper materials Gardiner uses seems to be of little consequence except in the employment of the forms and how they visually contribute to the spacial relationships and overall unity of the composition. 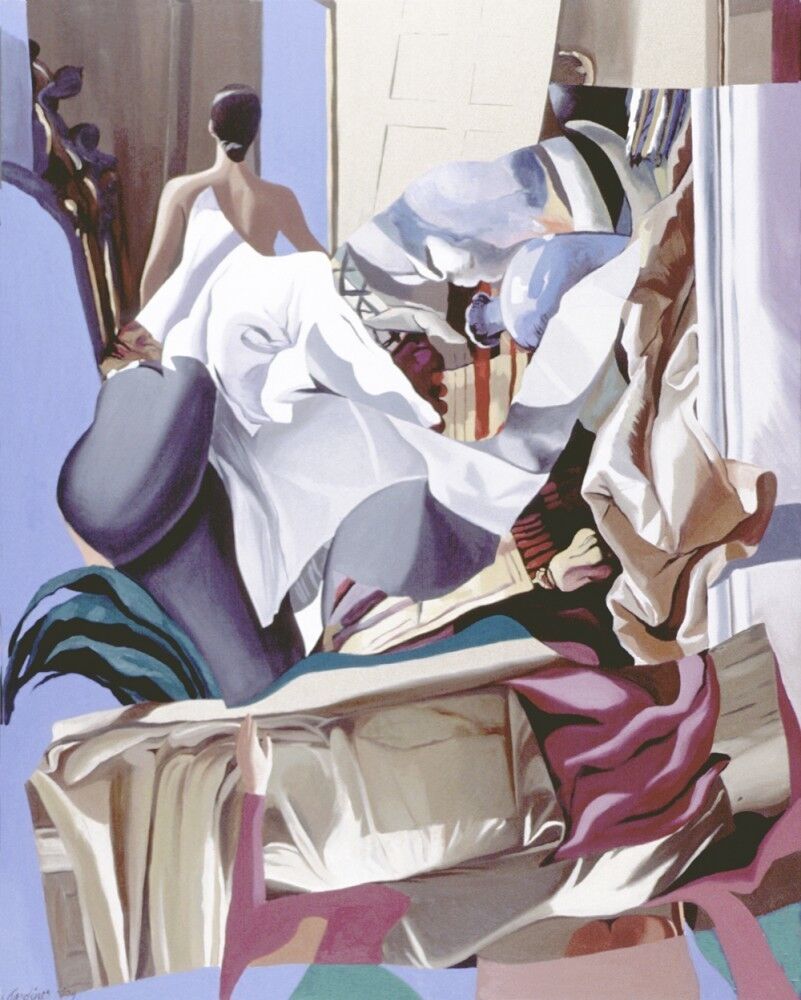 Ginnie GardinerOpera Prima, 1999. Nisa Touchon Fine Art
Ginnie Gardiner is a mid-career New York artist who has shown in numerous solo and group exhibits for 30 years. Gardiner graduated from Cornell University with a Bachelor of Fine Arts in 1974. In 2005 she moved upstate to Catskill, New York, where she and her husband renovated and restored the former Lyceum, a Federal era building located in this historic village.
‘You breathe more here,” says Gardiner, standing in her courtyard . And you can see that fresh air in Gardiner’s recent paintings, sun-streaked portraits and landscapes that attest to the dramatic impact of her move upstate after a quarter-century in a Manhattan loft. Yet these bold, assured images have unmistakable affinities with the cool modernism of Gardiner’s still lifes from the 1980s and the vibrant interplay between figuration and abstraction in her collage-inspired paintings of the ‘90s. They indicate the continuity of her formal concerns even as she opens up her work to the sights and sounds of her new environment.’ – excerpt from ‘Ginnie Gardiner, At Ease with Creation,’ Wendy Smith, 2015
Gardiner’s distinctive style of color notes of optically mixed oil paints produces shimmering, figurative abstractly coherent works. Gardiner sites the 2nd generation New York School painters and the Bay Area Figurative artists, with their reductive treatment of form and clarity of light, as influences. ‘Of course each artist has a distinctive way of unsettling our habits of seeing. With the sunlit stillness of her paintings, Gardiner seizes our attention and holds it with pictorial subtleties that show us, by stages, that stillness is not stasis. Presenting a precisely calibrated balance between figurative images and the harmonies of sheer form, each of her paintings oscillates between these two ways of seeing. Subliminal at first, this oscillation becomes conscious as we begin to see ourselves seeing. Encouraging us to be aware of how we make sense of the raw data of vision, Gardiner reminds us of our responsibility for the look—and the meaning—of our world.’ excerpt from ‘Sunlit Stillness: Ginnie Gardiner’s Transformative Vision,’ Carter Ratcliff, 2014
Ginnie Gardiner has been included in many exhibitions at the Pavel Zoubok Gallery in Chelsea over the past decade, including the 2010 exhibit ‘In Translation: Austin/Deem/Gardiner’. To quote from that exhibit: ‘In Ginnie Gardiner’s recent series of collages and paintings, the artist weaves landscape fragments from Cezanne Picasso and Hokusai with her own photographic images of dancers. The art historical passages in Gardiner’s works are decidedly abstract. Quotation is a vital aspect of her process and is rooted in the images and theories of twentieth century collage (particularly in the fields of Dada, Surrealism, and Pop). In combining historical reference with contemporary images of the body, she creates a richly layered landscape of shifting color and movement that is recognizable yet elusive. ‘ Pavel Zoubok, 2010
In ‘Daughters of the Revolution.’ A group exhibition in 2009, also at the Pavel Zoubok Gallery, art reviewer Mario Naves wrote ‘but the best finds here—Ginnie Gardiner and Maritta Tapanaine—glance respectively upon Freudian portent and microcellular absurdism. With Gatekeeper (2008), Gardiner makes something tender and silky from Surrealism’s dreamlike amplitude – It’s a fleet bit of magic and of a piece with a lovingly paced and engaging exhibition.?’
‘Generally, Gardiner’s vibrant color and elegantly energized figures are breathtaking. And they energize the viewer as well.’ Glenn Loney, Curator’s Choice, February, 2000 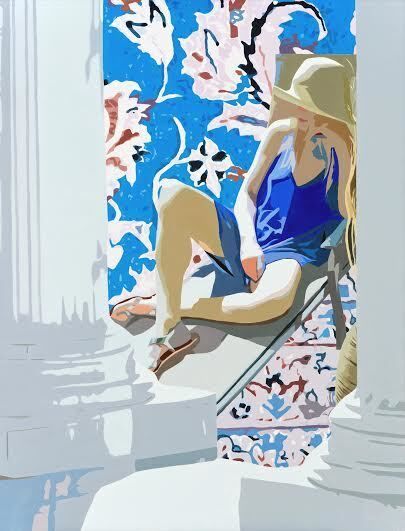