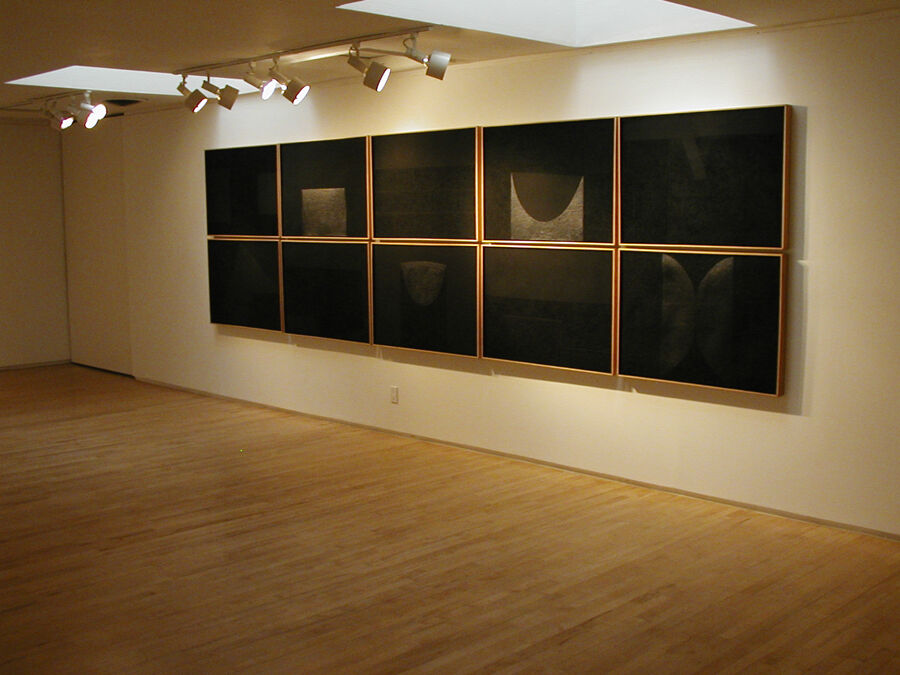 A notorious recluse, Burri rarely spoke about his long and prolific career, during which he produced a diverse body of artwork, from paintings to sculptures to installations and printed multiples. He named his artworks unambiguously: Catrami (tars), Bianchi (whites), Saachi (sacks), Combustioni plastiche (plastic combustions), Cretti (cracks). Burri’s straightforward approach to artmaking reached a crest towards the end of his career, as he became drawn to creating pieces in monotone, building images from subtle variations in texture. A far cry from the torn, burnt, smeared and slashed assemblages of his early career, the artwork that Burri began to produce in the late 1980’s and early 1990’s truly embodied his mantra of “form and space.”
In 1990, Burri produced an artwork that expresses this paradigm shift perhaps better than any of his other creations. Mixoblack is a series of 10 prints on handmade paper that the artist produced in collaboration with the Los Angeles-based print shop Mixografia. The prints are astonishingly, deeply, black. Their darkness is intersected by shapes created using very fine surface detail in relief, achieved through Mixografia’s unique relief printing process. In the absence of color, this striking series of prints truly embodies Burri’s desire to isolate the nature of forms and space. 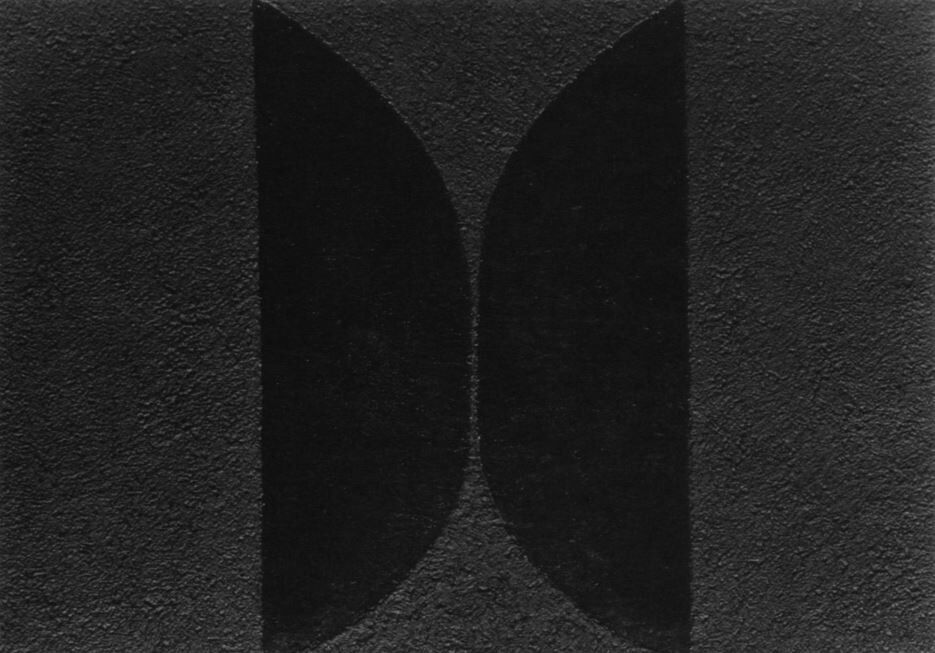 The surface of each print in the ten-piece suite toggles between shiny and matte black, overlaid with angular and round geometric shapes that stand out against the different background textures. The smooth and rough backdrops shift according to the shapes found on the print, creating a pattern of texture that supports the aesthetics of each shape. Burri designed each piece in the suite as part of a larger unit, creating a careful composition that embraces the importance of texture and shape in creating visual meaning and coherence.
In order to create Mixoblack, Burri designed models for his prints using acrylic and marble powder on Masonite, producing images that were deeply expressive in their manipulation of texture, while remaining refined in their simple use of one pigment. His use of shiny and matte black inks creates an juxtaposition of light and texture that adds dimensionality to each panel of the series. The semi- circles, squares, trapezoids, and other shapes are simple and unimposing, but the subtle differentiation of textures and the variants of black seem to bring them to life.
Although simple, Mixoblack puts forth a deeper motivation for the artist’s practice. While designing his artwork in the Mixografia workshop, Burri revealed that his fascination with the color black stemmed in part from its association with an “end”, such as death or the termination of a day. Yet the artist also understood black’s potential as the first step before the beginning of a regenerative cycle. One of the last artworks completed before Burri’s death, Mixoblack expresses that within total darkness it there is the possibility of finding hope and the promise of a new beginning, like the guarantee of a breaking dawn. In this piece, Burri challenged the audience to find their own “beginning” and “end” in the darkness, using black as a medium for the discovery of hope.
Alberto Burri is the subject of the major retrospective Alberto Burri: The Trauma of Painting at the Guggenheim Museum in New York, on view from October 9, 2015 until January 6, 2016.
Mixoblack is on view at Mixografia's booth 300 at the 2015 IFPDA Print Fair at the Park Avenue Armory in New York, from November 5 until November 8.
Related Stories