100 Years After Malevich’s Black Square, Whitechapel Gallery Shows the Artist is More Relevant Than Ever 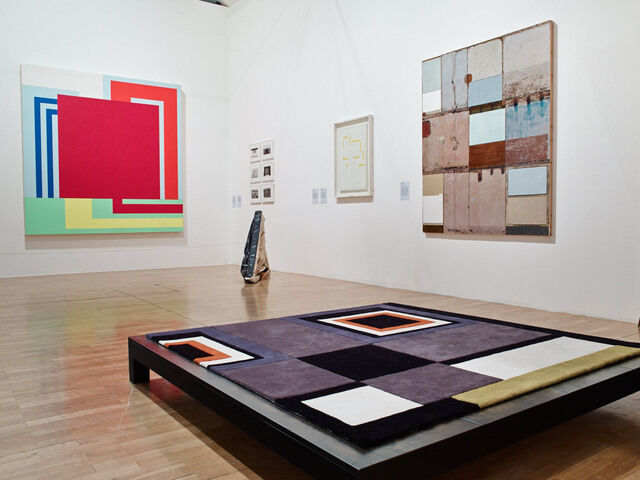 Two years before the tempestuous Russian Revolution shook the world with its radical ideology and ruthless methods, a 30-something painter born in modern-day Ukraine kickstarted a historic uprising all his own.
Kazimir Malevich
’s Black Square (1915), a diminutive jet-black oil square surrounded by a pristine white linen border, was a rebellion against the dominance of depicting real life—an insurrection against figuration. 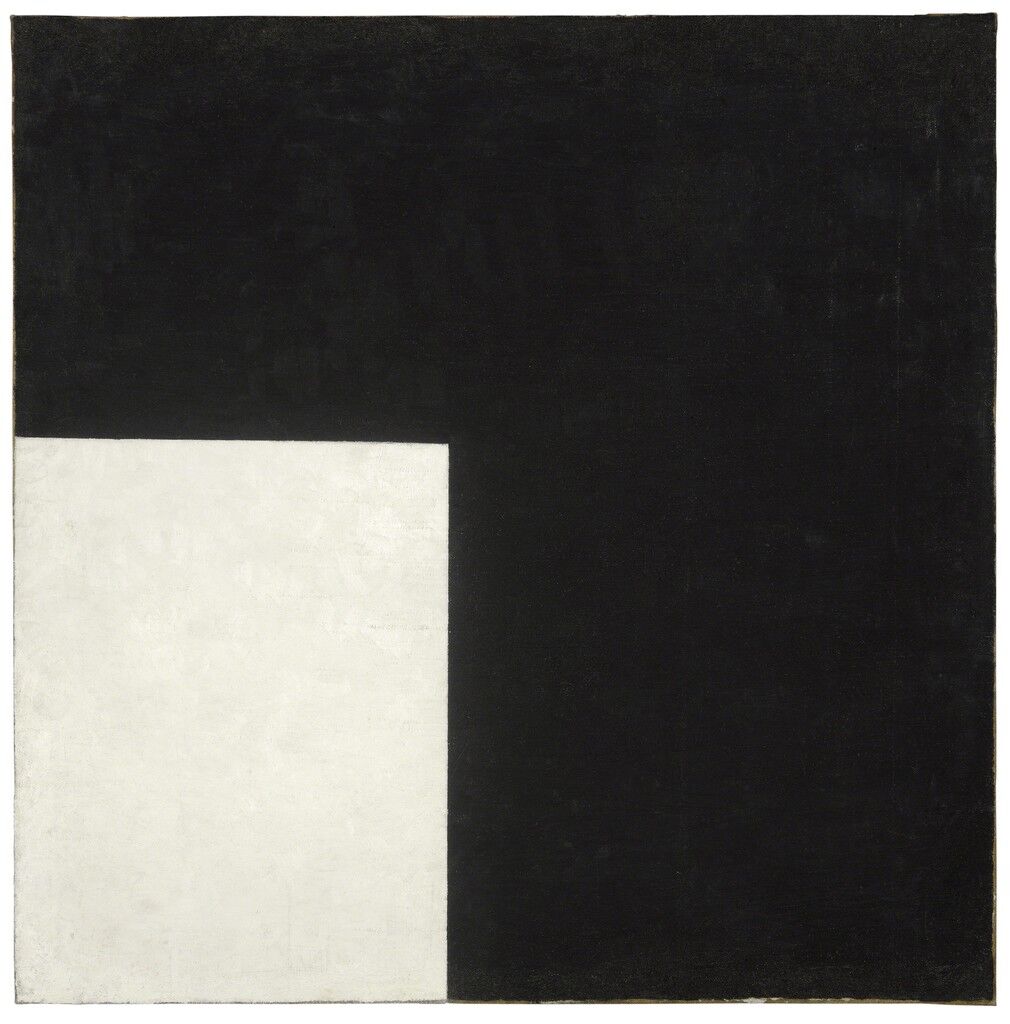 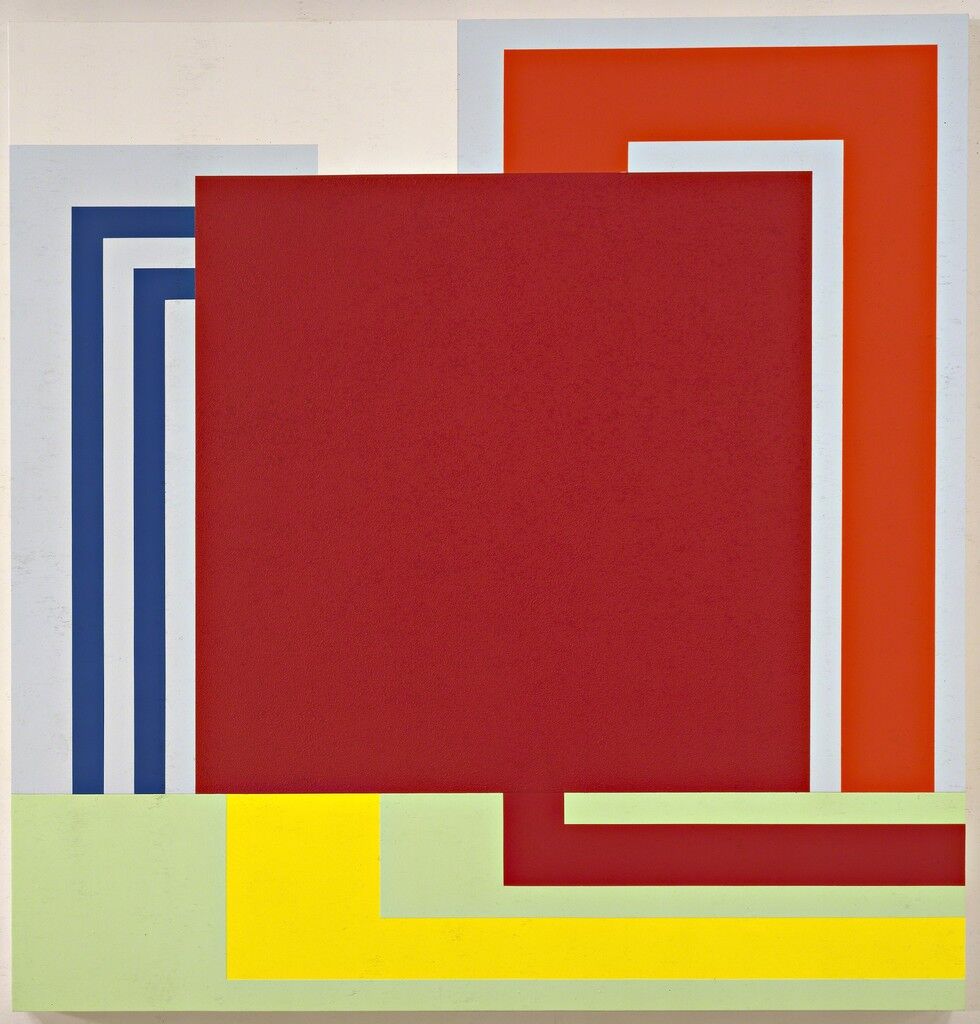 Peter Halley
Auto Zone, 1992
"Adventures of the Black Square: Abstract Art and Society 1915-2015" at Whitechapel Gallery, London (2015)
“Up until now there were no attempts at painting as such, without any attribute of real life,” declared Malevich, in a text accompanying Black Square’s first showing—exactly a century ago—at “The Last Futurist Exhibition of Paintings: 0.10” in Petrograd (now Saint Petersburg), Russia. “Painting was the aesthetic side of a thing, but never was original and an end in itself.” This is not entirely true. There were
Mondrian
’s contemporaneous warped-checkerboard geometries. And the Islamic world’s tradition of abstraction is centuries old. What Malevich did ostensibly achieve, however, is the distillation of abstract painting to its most fundamental core: an image without reference to reality. 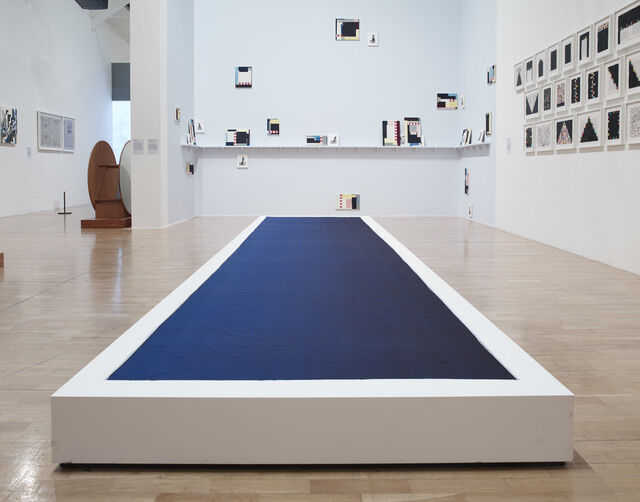 Advertisement
“Adventures of the Black Square: Abstract Art and Society 1915-2015” is a landmark, sprawling show at London’s Whitechapel Gallery, which spreads over six exhibition spaces and includes over 100 artists. It takes his bijou quadrilateral as a starting point from which to explore how this strand of abstraction was adopted and appropriated across the world. From the aging nobility of Malevich’s Black Quadrilateral (undated), to the captivating beauty of Red Quadrilateral (undated) and the now-cracked charm of Black and White. Suprematist Composition (1915), the exhibition proceeds to reflect on the vast swathes of geometric, methodical abstraction, which Malevich influenced (as opposed to the fertile freestyle forms in the lineage of
Joan Miró
and
Cy Twombly
). 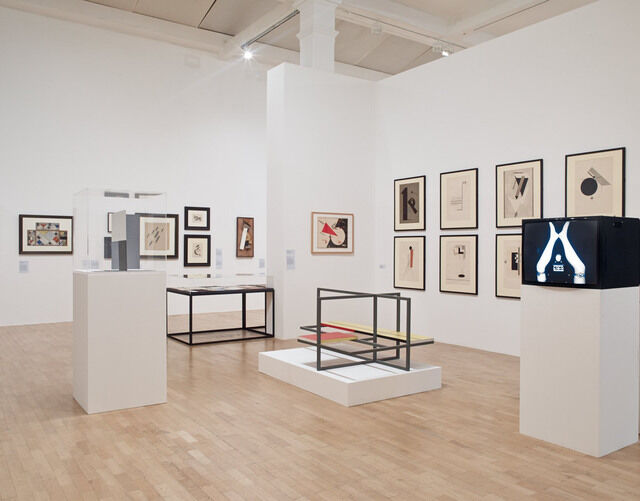 This almost mathematical, mechanical approach to art came to be considered the most democratic form in what was—as the curators Iwona Blazwick and Magnus af Petersens argue—the most democratic century in human history. Spectrums, shades, and degrees are given equal value. Also on view,
Alexander Rodchenko
’s photographs of Vladimir Shukhov’s spiralling Moscow radio tower are a sumptuous study of shape.
László Moholy-Nagy
’s shots of the Berlin Radio Tower reduce a titanic structure to pleasing bird’s-eye symmetry.
Josef Albers
’s Homage to the Square (1963) meditates on the properties of color in a layered, lemon-yellow-to-burnt-umber spectrum. And the off-kilter lines of Jeffrey Steele’s Third Syntagmatic (1965) bisect the canvas with infinitesimal angles. 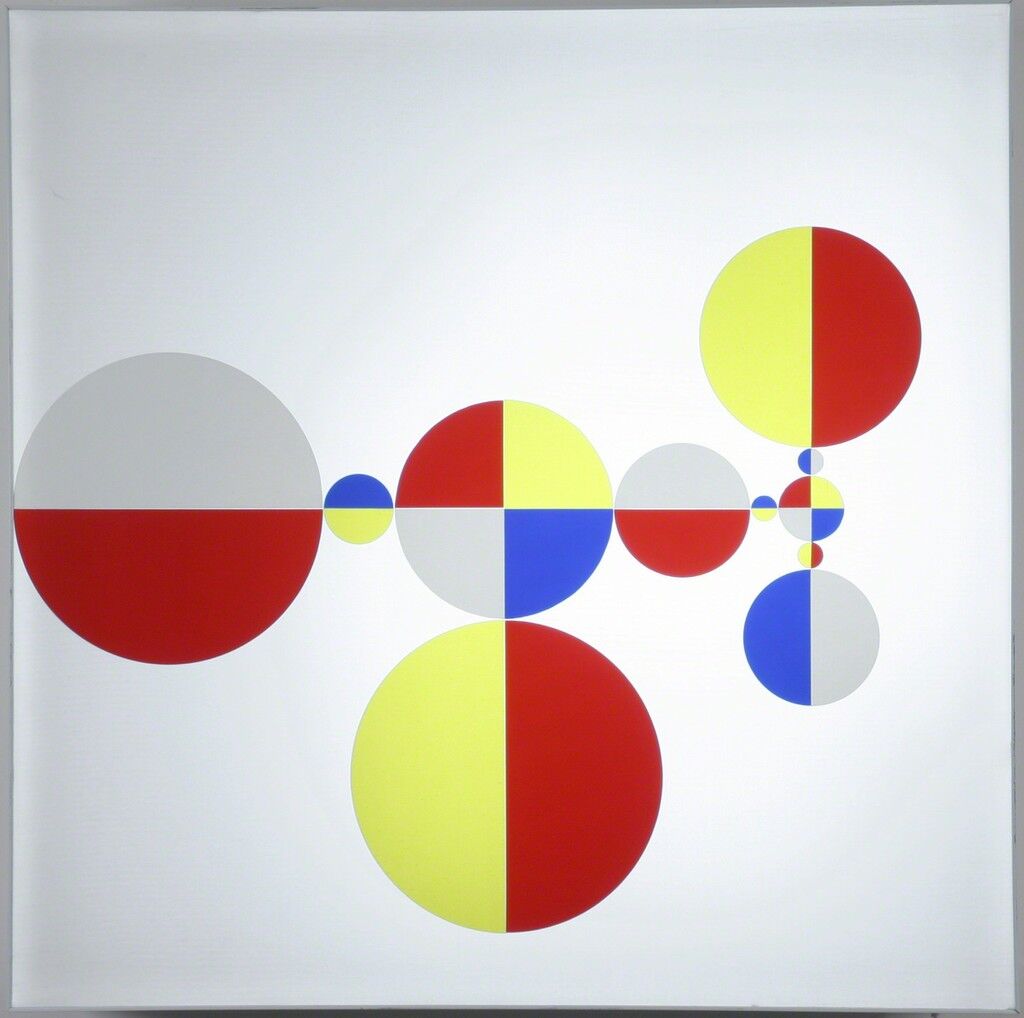 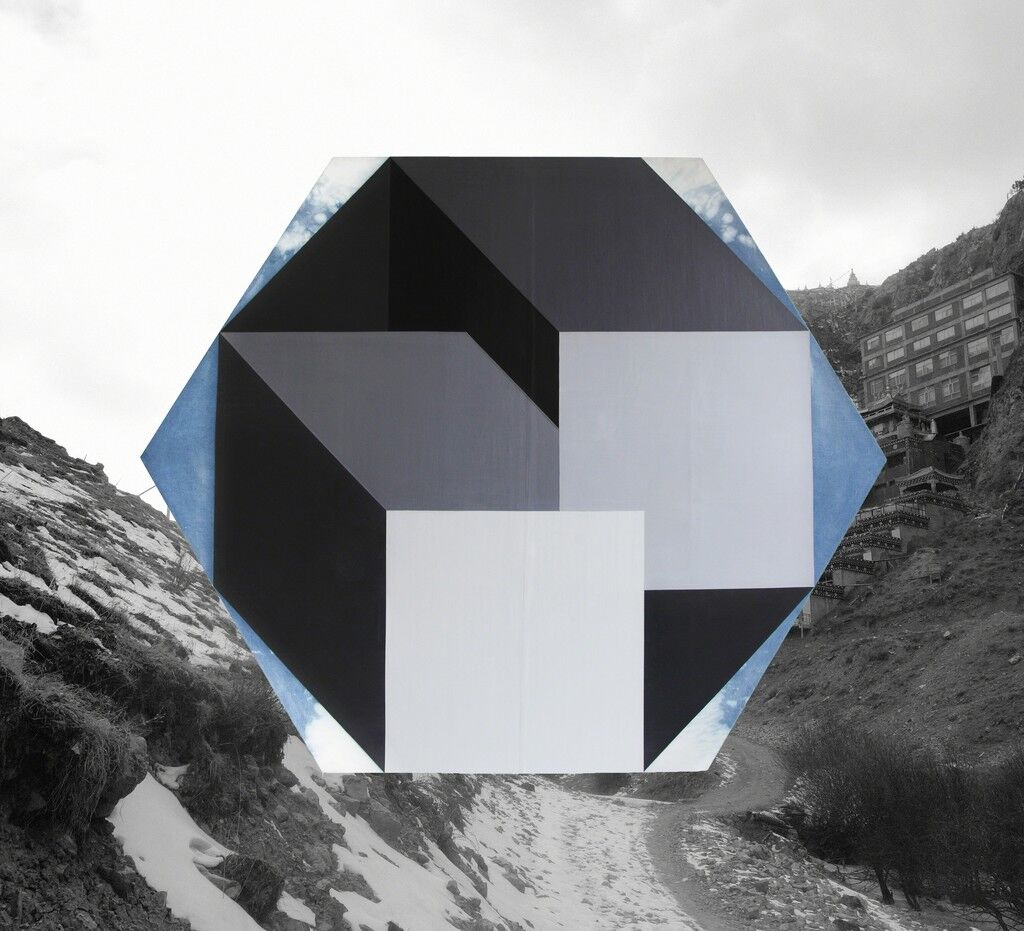 Zhao Yao
Spirit Above All 1-93A, 2012
"Adventures of the Black Square: Abstract Art and Society 1915-2015" at Whitechapel Gallery, London (2015)
The exhibition is divided into four wider themes: Utopia, Architectonics, Communication, and The Everyday. Though, there is much bleeding between them.
Fernand Léger
’s Ballet Mécanique (1924), a 35mm black-and-white short film, mimics the clockwork structure of daily life through the then-burgeoning communication medium. In a nuanced twist, the Brazilian duo Gasparian and
Serpa
’s works on display evoke dazzling binary code data, with the latter typing out a series of upper and lower case o’s on his 1950s Corona typewriter for 33 Untitled (1955). Elsewhere, art magazines on display such as Belgrade’s Zenit and Buenos Aires’s Arte Concreto reveal the extent to which abstraction percolated globally. 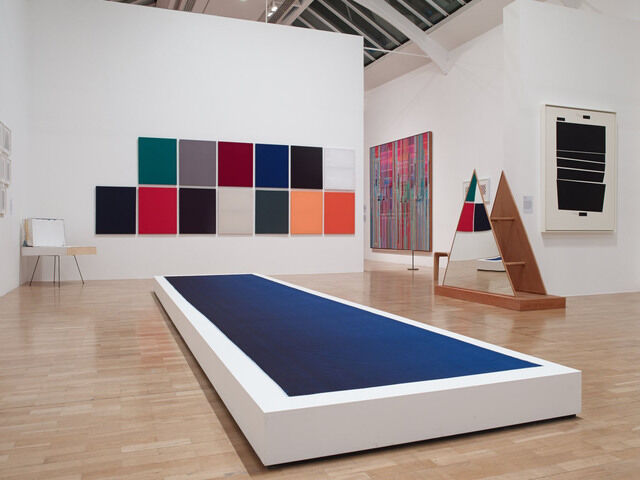 This is perhaps the most significant argument that “Adventures of the Black Square” posits. Despite the many mesmeric works on display from the West (Dora Maurer of the Hungarian avant garde’s 1979 multiple-exposure work Seven Rotations 1 to 6 being an extraordinary example), the exhibition’s tracking of the non-Western is a fresh, original perspective. It follows the Latin American shift away from the figurative paintings of their European Catholic colonizers, and even shimmies up to the modern day. In the film Retoque / Painting (2008),
Francis Alÿs
repaints the old territory marks of the Panama Canal. And
Liu Wei
’s Purple Air (2014) responds to the rampant change of 21st-century China with soaring lines of stratified paint. 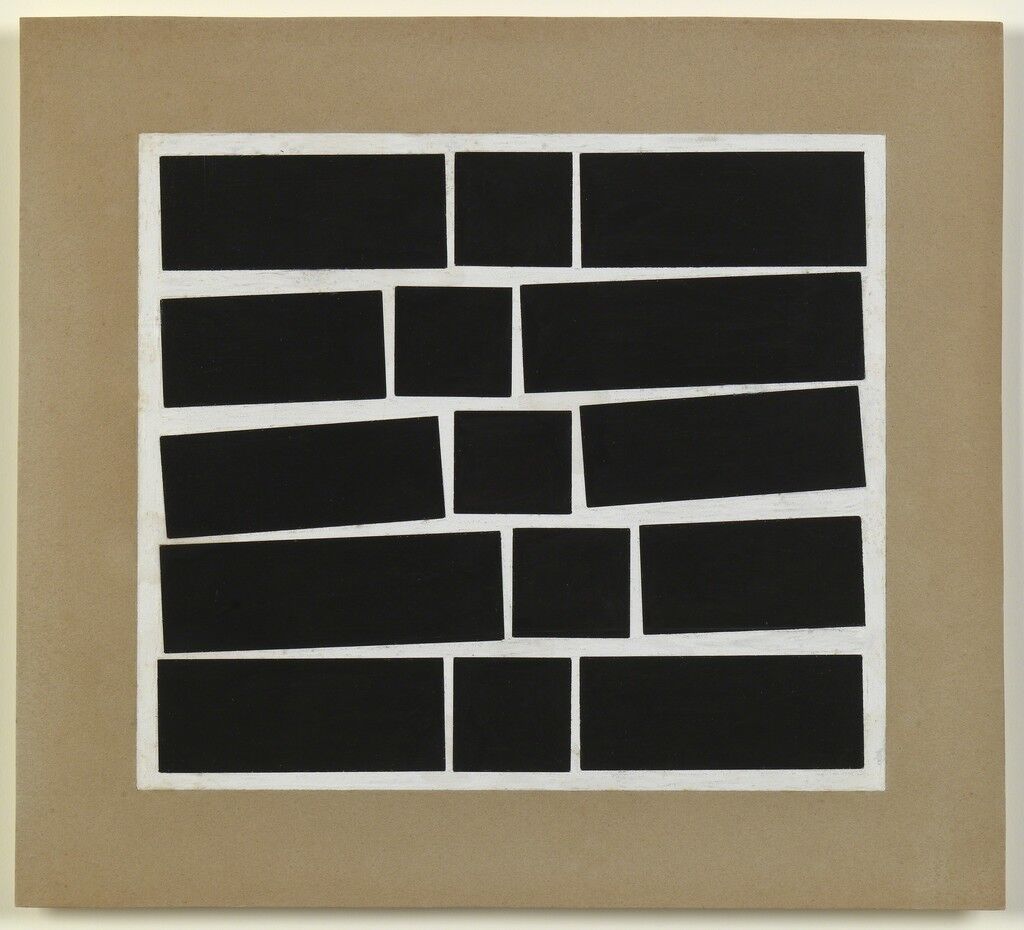 Hélio Oiticica
Metaesquema 464, 1958
"Adventures of the Black Square: Abstract Art and Society 1915-2015" at Whitechapel Gallery, London (2015)
More than a geocentric shift, though, the second half of the show indicates a more dystopian outlook than did the first shoots of abstract art. Lis Rhodes’s dissonant video Notes from Light Music (1976) groans and creaks to a foreground of disconcerting light play. Elsewhere, we learn that Venn diagrams were actually banned under the 1970s military junta in Argentina because they invoked the idea of collective action. Here, the social function of phenomenology, of visual experience, is made clear: What better shape than a megaphone to illustrate it, as Romanian Zvi Goldstein does, with its malleable transformation from Russia propaganda to Middle Eastern mecca. 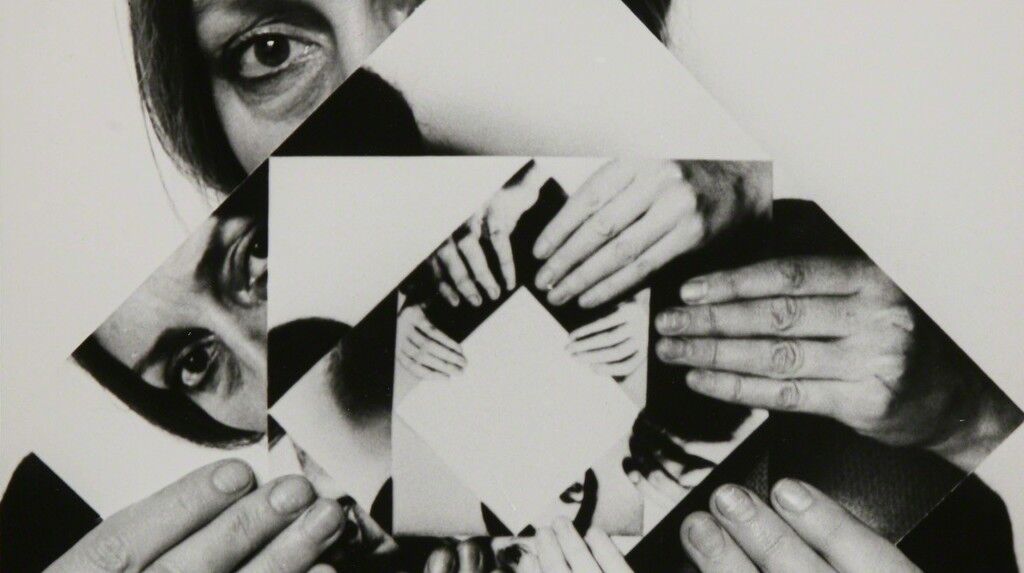 Dóra Maurer
Seven Rotations 1 – 6, 1979
"Adventures of the Black Square: Abstract Art and Society 1915-2015" at Whitechapel Gallery, London (2015)
Malevich once declared that his collection of squares marked the end of painting. This beguiling Whitechapel Gallery show doesn’t quite affirm his claim. (Figuration has existed from cave paintings to classroom doodles, and will continue to.) But it certainly demonstrates the beginning of a new kind of painting—and society. Such is the transformation that even the gallery space has been intricately carved and partitioned like the canvases on its walls, the sculptures on its floor, and the black square inside a white cube on a coffin that Russian artist Nikolai Suetin lovingly designed for Malevich, the master of abstract art. 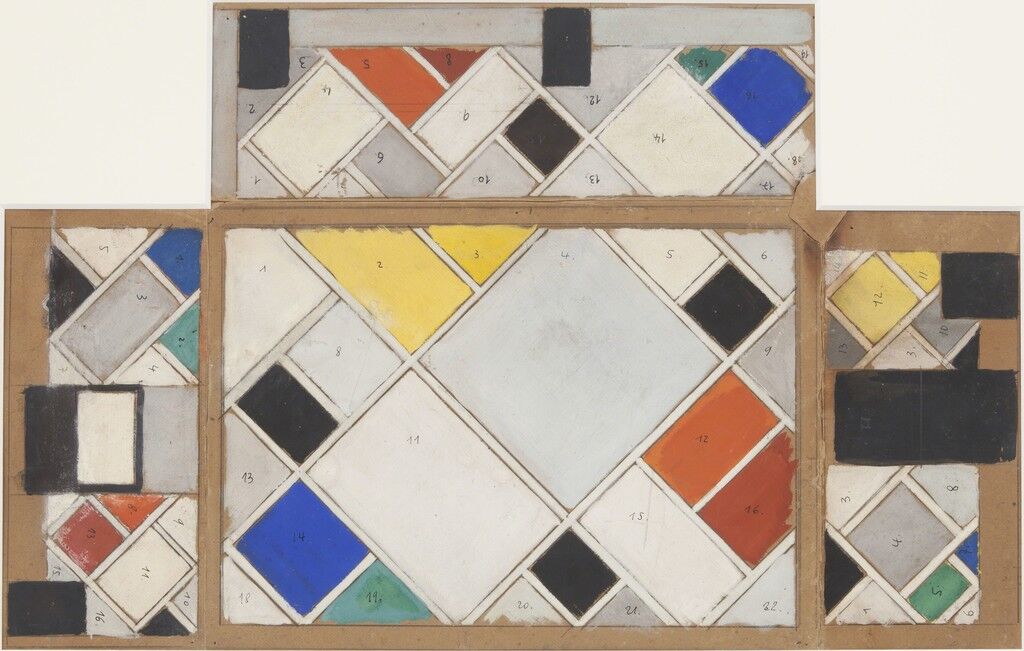