Casey Lesser
Jan 24, 2015 9:18pm
“Michael is a conceptual artist who uses photography to realize his imagery,” Tom Gramegna, the owner of Gallery 270, recently told Artsy. Gramegna, a photographer himself who has been in the business for some 40 years, has been showing the artist’s works for six years at his gallery, which specializes in contemporary photographers who control every aspect of their processes, often through use of vintage 19th-century analog printing techniques.
He emphasizes that Massaia isn’t just a photographer; his works involve storied photographic techniques for chemical negative development and printing, engineering, intricate planning, and storyboarding. This multifarious approach—which in combining so many skills and processes, may be unprecedented, coming from a single person—is carried out in order to execute original ideas. “The photographs are true ‘one shot’ scenes whose images are never composited from multiple exposures,” Gramegna wrote in a recent Gallery 270 blogpost “An Essential Guide to the Work of Michael Massaia.”
It doesn’t stop there, though; Massaia has perfected his own film-developing chemistry, allowing him to render prints from hour-long exposures with detail in both shadows and highlights. He’s even engineered his own hardware: “To create his high resolution contact printing negatives, Michael has effectively ‘frankensteined’ three broken, software-unsupported Scitex scanners from the mid-’90s, into one super scanner with spare parts,” Gramegna explains.
Massaia’s images reveal a hyperawareness of his surroundings that reflects the contemporary zeitgeist. This is perfectly exemplified in his “Deep In A Dream: Sheep Meadow” series, where figures in repose appear to be enveloped in darkness and illuminated by moonlight. In one work a young woman is caught in a slumber, laying on her side in a satiny black dress with a bright white earbud trailing out of one ear and across her neck; her smooth graphite-like skin is alight, while blades of ominous black grass graze her legs. Sometimes he flips the orientation of these works, making them vertical compositions where it appears as though his subjects are levitating, ascending upwards. These are not posed subjects; in fact, they are the result of the photographer hiding in plain sight, capturing sunbathers in Central Park during broad daylight. 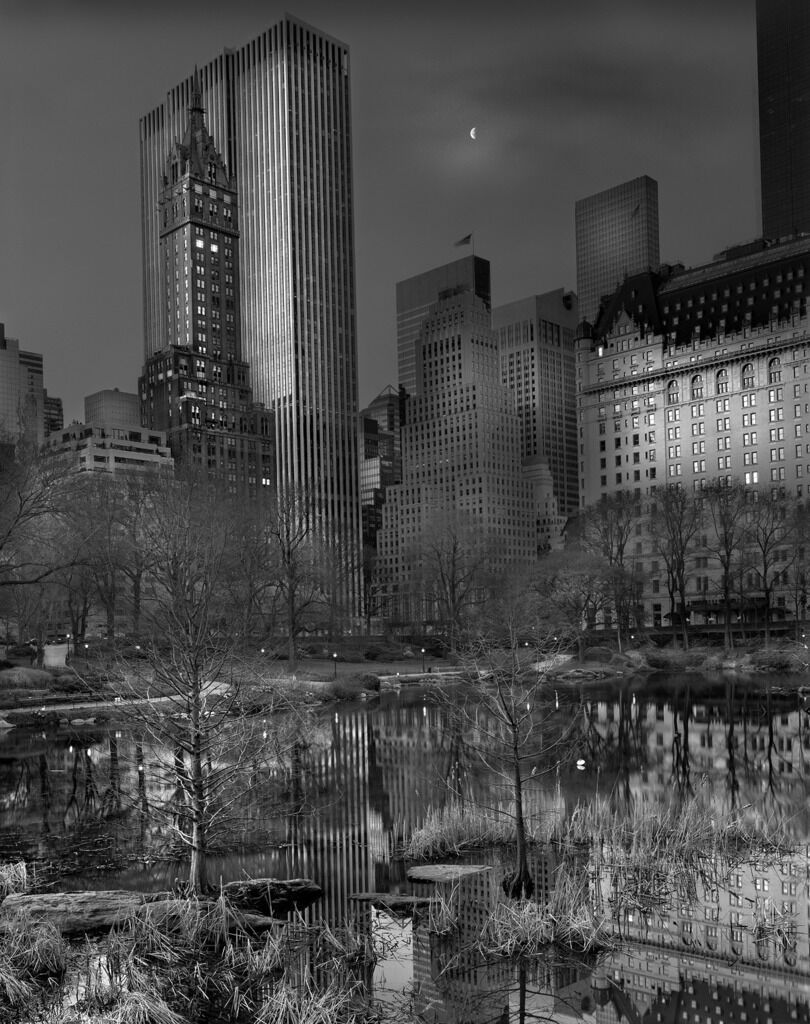 Michael Massaia
Moonrise NYC 5am, 2009
Gallery 270
Gramegna dubs these works “the absolute antithesis of a snapshot,” and explains that in creating them Massaia is “looking for a pose that you could never ask someone to strike.” The works, which were first conceived in 2006, mark the first time he has featured people. He was prompted to trade out his large-view cameras, which were uncomfortable to use given the setting, for a less-obtrusive medium-format digital Leica, in order to more easily blend into the scenery. “Despite their digital capture,” Gramegna points out, the works illustrate “the perfect marriage of analog and digital.” To realize the final artist-made silver gelatin prints for the “Deep In A Dream: Sheep Meadow” series, he under-exposes the image in-camera, outputs the digital file to create his inkjet-based contact printing negative, further underexposed in his printing, and burns and dodges the chemically based final silver gelatin prints. The final product is a one-of-a-kind, handmade analog silver gelatin print.
For other recent series, Massaia has traversed his native New Jersey and New York City, capturing electronic billboards, 18-wheelers, rustic clapboard houses, and an empty Central Park, often during the early hours of the morning—which began as a consequence of his being afflicted with insomnia. Each series proves his unique approach to the photographic medium, yet certain signature traits emerge, like his expansive, infinite pools of black, the sharp articulation of his images, the richness of his grayscales in both silver and platinum, and the way his works seem to be lit from within. Ultimately, Massaia’s images are informed by the vintage processes that inspired his beginnings and the innovations that keep him going. Gramegna put it best when he remarked, “To me, the job of an artist is to fundamentally look at something and to render it in a way that we hadn’t seen before. I’ll never look at a tractor trailer truck, melting ice pop, billboard, or amusement park ride the same way again.” Massaia is certainly excelling at his job.
Casey Lesser is Artsy’s Lead Editor, Contemporary Art and Creativity.
Discover more artists at Gallery 270.
Related Stories