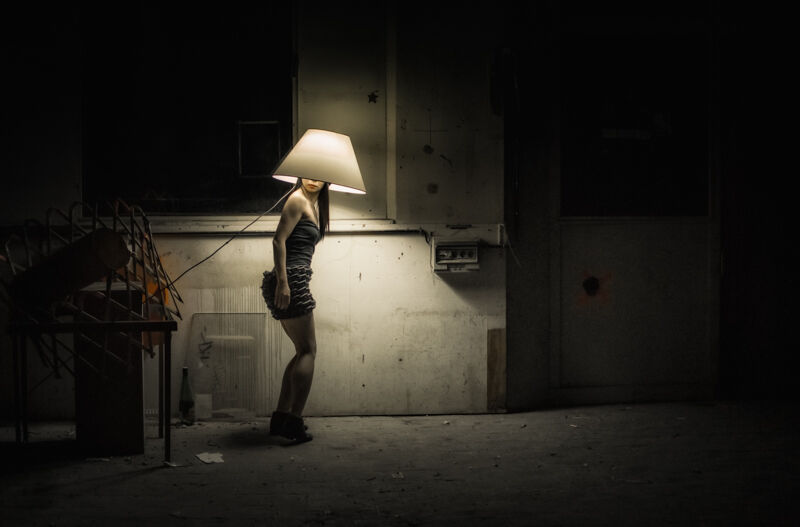 In a 19th-century industrial building in the Marais district of Paris, a lampshade in the throes of metamorphosing into a human figure moves through its dank, cavernous spaces. Out of the forgotten vestiges of the building’s past lives—cables snaking out of orifices, a discarded mattress—new life forms are beginning to emerge. This sets the scene for the second installment in a series of films, titled “Mutant Stage,” shot within a new art space, the Fondation Galeries Lafayette, set to open to the public in late 2016: a philanthropic project of the century-old Paris department store, Galeries Lafayette. 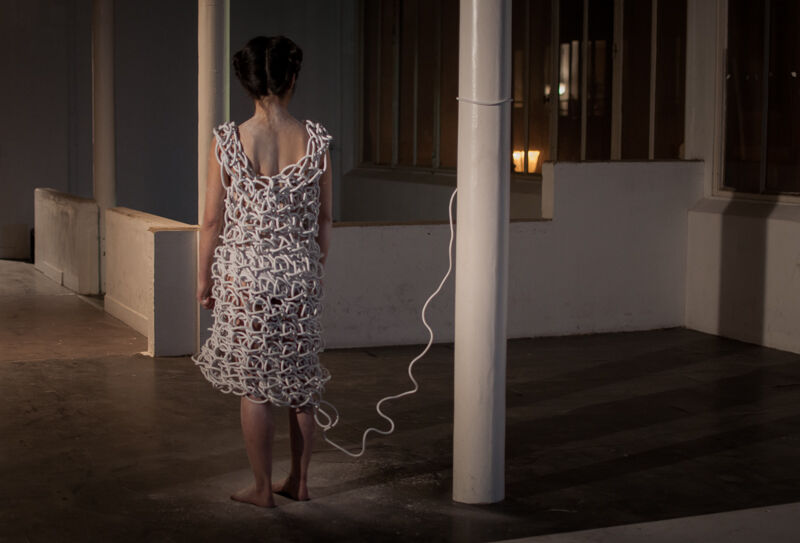 For
Elene Usdin
, the director of Mutant Stage 2, the empty spaces within the building played both muse and stage for a concept she describes as an Ovidian fable. “The idea for the film appeared to me during the initial scout of the foundation,” she says. “The soul of the place, the mark of time and the memory of each successive era hit me. Despite being gutted for the renovation, the place seemed inhabited. There were only a few chairs, lamps, and cables falling from the ceiling.”
Usdin’s film is among other projects, performances, and exhibitions that have been hosted in the shell of the building during its nascent stage, including
Simon Fujiwara
’s New Pompidou (2014), a video, performance, and sculpture that together form a beautiful, mournful elegy of sorts to the Centre Pompidou and the Marais district in which it resides. Fujiwara mined the industrial and environmental histories and narratives embedded in the area—the bakeries, abattoirs, brothels, swamps, and felt-making workshops, and the creation of the Pompidou itself, as he explained over the phone. “Discovering that the Marais meant ‘swamp’ in French informed the way I saw what the Marais is today. It was exciting to think that we could bring back in some way an echo of the past into the [Fondation Galeries Lafayette] building, breathing life into it but through a somewhat macabre way, to create this new monument.” 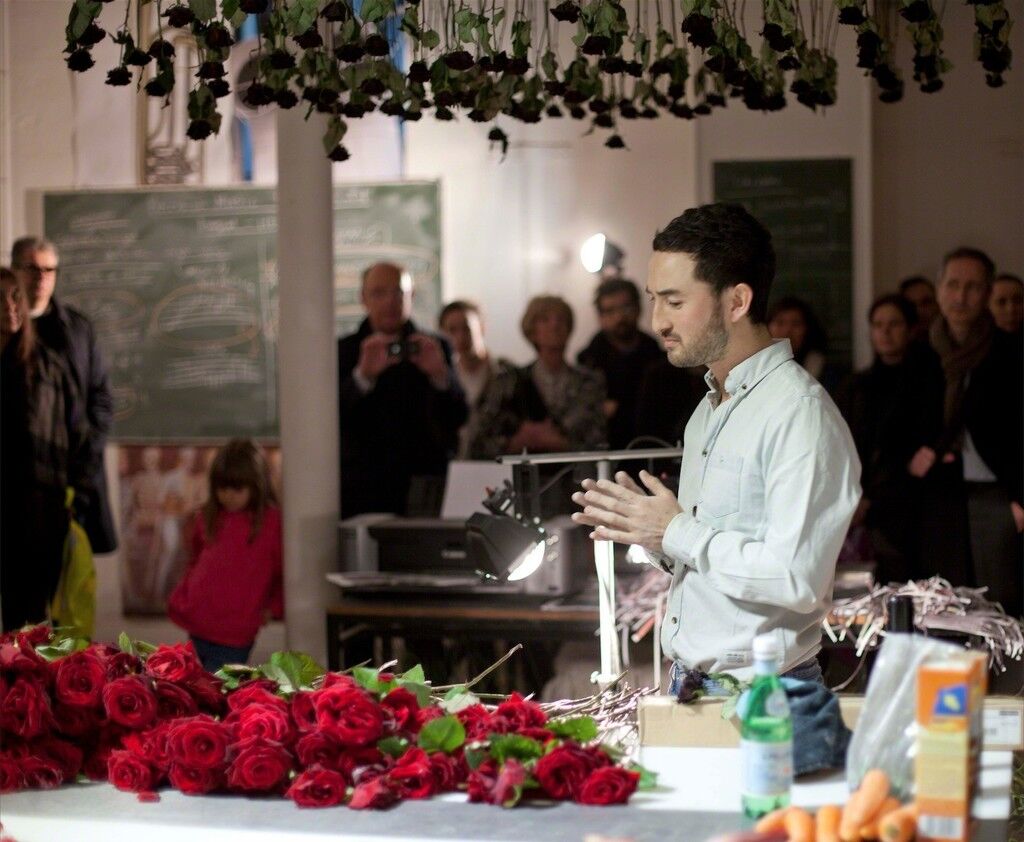 Simon Fujiwara
New Pompidou (Performance), 2014
Fondation d'Entreprise Galeries Lafayette
Advertisement
Fujiwara’s monument, or Gerberette (2014)—a plaster and earth slab in the form of an architectural fragment of the Pompidou, containing dirt from beneath the Fondation Galeries Lafayette building—was the centerpiece of a performance that took place on February 14 last year. “It interested me to bring back the forms of alchemic life or biological life that once existed in the Marais and that made it famous, but that now exist more as traces,” says Fujiwara. The evening culminated in a nighttime procession through the district, with the Gerberette carried from the Fondation building through the streets to the sound of serenading trumpets and delivered to the Pompidou, where it now rests, on exhibit. “It was a kind of birth-giving,” he laughs. Built at 9 rue du Plâtre in 1891 by the creator of the department store Bazar de l’Hôtel de Ville, or BHV, which operates under the Groupe Galeries Lafayette umbrella, the building has been in the family for decades. Guillaume Houzé, director of corporate patronage for the company and a descendant of the Moulin dynasty that owns it, as well as an avid art collector, traces the corporation’s involvement with the visual arts back to the early 20th century. “In 1913, Marcel Duchamp conceived the first readymade in the history of art, using a bottle rack purchased from BHV,” Houzé says, referring to the artist’s Bottlerack (1914), which drew attention to the aesthetic form of a metal structure used to dry wine bottles, and which served as a forerunner to a work of art that might be the most iconic and influential of 20th-century art history, Duchamp’s Fountain (1917). “Galeries Lafayette hosted the second Salon de Mai in 1946,” Houzé continues, “and then in 1960 it held an exhibition dedicated to abstraction. In the middle of the store, shoppers could discover works by artists like Giacometti, de Staël, Dubuffet, and Poliakoff.”

From 2005 to 2011, Houzé worked on a program of exhibitions, titled “Antidote,” sourced from the Moulin family collection and held in the Galerie des Galeries, a dedicated art space housed in the flagship boulevard Haussmann branch of the department store. Now, with the launch of a separate philanthropic foundation for the arts supported by the Groupe Galeries Lafayette, art and commerce—long interdependent but awkward bedfellows—will have more distance from one another. 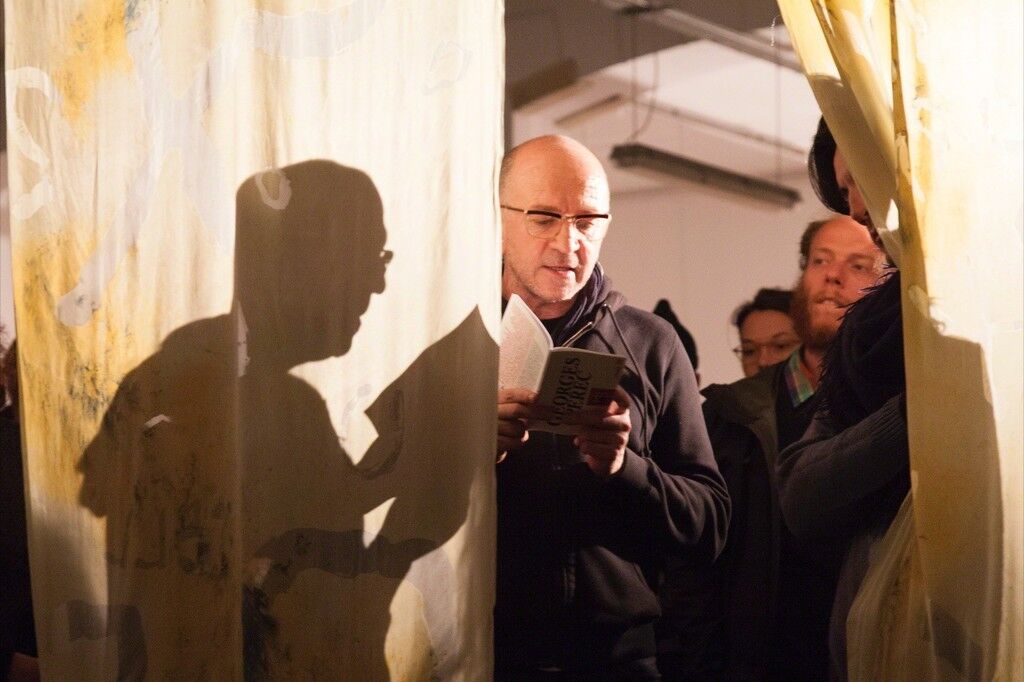 Compagnie MUA
Emanticipation, 2014
Fondation d'Entreprise Galeries Lafayette
After recruiting François Quintin as director of the foundation, Houzé approached Rem Koolhaas to undertake an ambitious renovation of the site. Fusing old and new, the building will boast 2,500 square-meters of space and mobile floors that can be moved upwards and downwards according to the vision of whichever artist is being featured, a design that resonates with Houzé and Quintin’s ambitions for the space as an evolving, organic entity, with curators rotating every three years to keep the program fresh. “We worked closely with all the services of the city of Paris, and all the architectes des bâtiments de France, so that we could propose a new interpretation, a new space,” Quintin explains. “Even though the project is ambitious, and very much like Rem Koolhaas—precisely thought-out as an architectural gesture—it’s respectful to the history of the building and the situation in the center of Paris.” 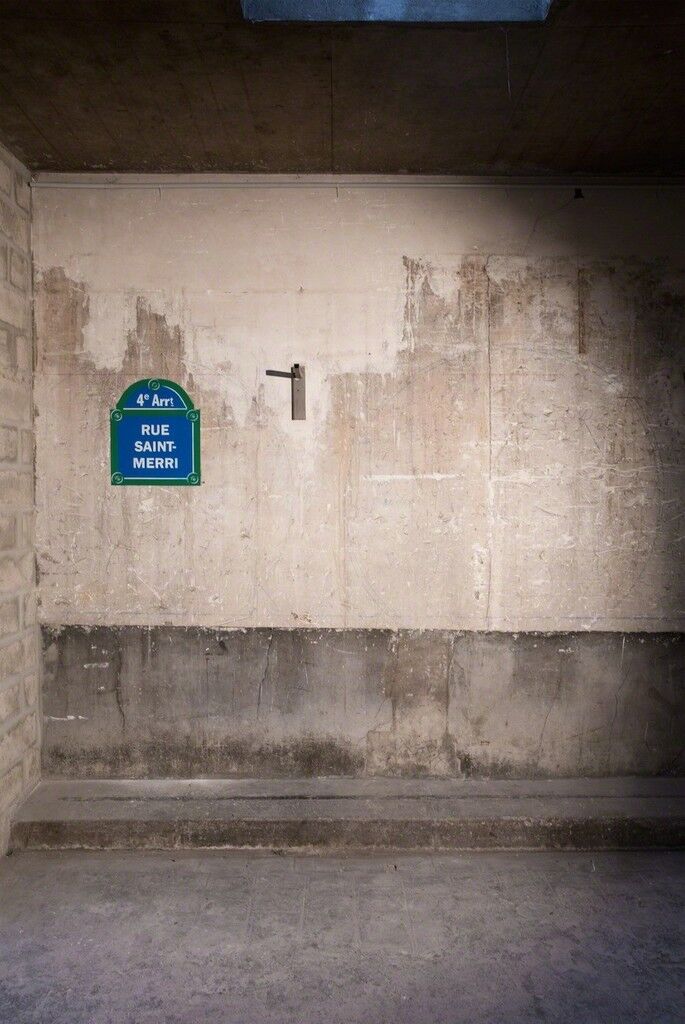 Paule Kneale & Raphael Hefti
Pleasure Principles, 2014
Fondation d'Entreprise Galeries Lafayette
Indeed, Houzé and Quintin talk about their vision for the Fondation Galeries Lafayette space in terms of symbiosis within the worlds of art, fashion, and design, a relationship that draws on past models of French art spaces. “In Paris there is this tradition of the salon,” Quintin says. “It’s the idea of places where people would gather and speak, and exchange ideas, and create different kinds of societies. So in a way, this building is a kind of salon where people can gather and meet.” Among the ephemeral program of events hosted in the building before construction began was a storytelling salon, in which figureheads from the fashion world told narratives about their lives and favorite garments. 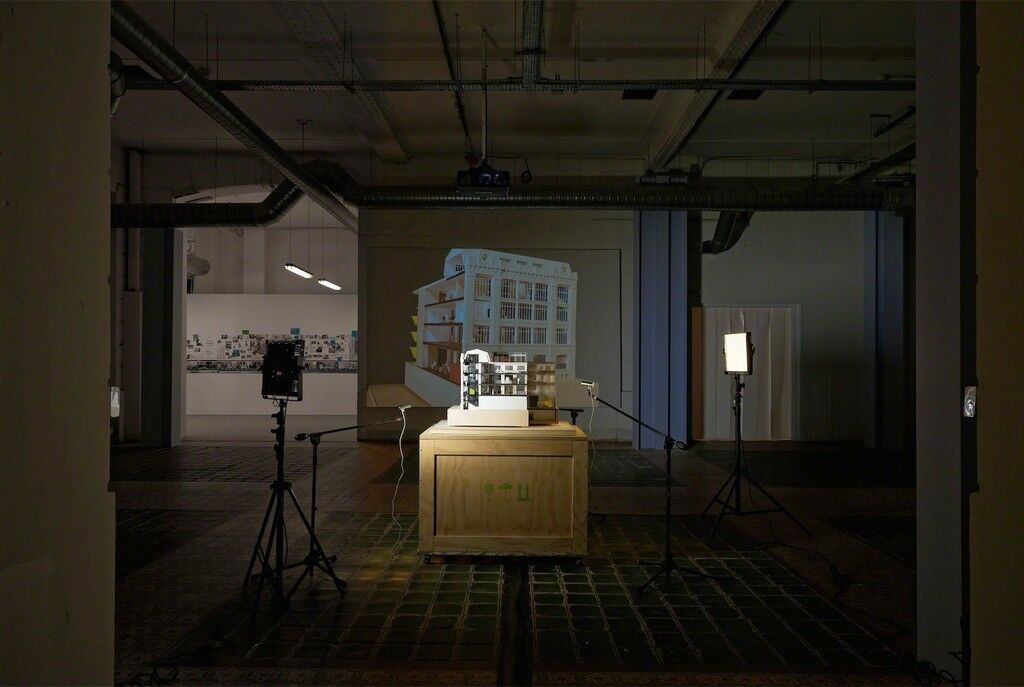 Pierre Giner
Reveal, Points de vue sur la maquette, 2014
Fondation d'Entreprise Galeries Lafayette
The builders have now moved into 9 rue du Plâtre, but the artists have not fully vacated. “When we were at the end of this period and the construction was starting, we wanted to document it other than by just taking architectural photographs,” says Quintin, speaking of the “Mutant Stage” series, which is curated by Amélie Couillaud and Dimitri Chamblas. “We wanted to follow this idea that somehow the architecture is performing, too—all the more so in our building because the space will be moving by itself. I’m thinking of the movement of the cranes, the workers, but also of how the French scene is changing, according to the situation of this building within the French and national ecosystem.”
Tess Thackara
Explore Fondation d’Enterprise Galeries Lafayette on Artsy.
Related Stories