As Björk Opens at MoMA, Behind the Scenes of Her Most Iconic Images 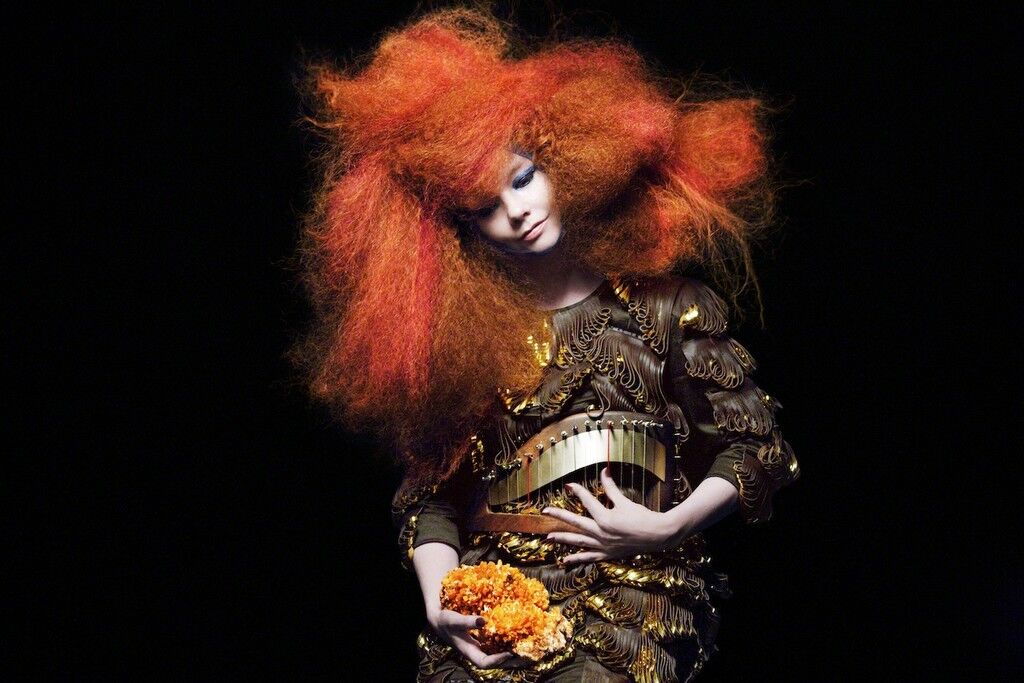 Inez & Vinoodh
Björk - Biophilia, 2011
Gagosian Gallery
Second only to sitting in on the cover shoot for one of
Björk
’s eight full-length albums is chatting with Inez van Lamsweerde—one half of photography duo Inez & Vinoodh—as she recalls favorite moments from the artists’ 16-year collaboration. Before Björk’s 20-year retrospective opens at New York’s Museum of Modern Art (MoMA) this Sunday, we go behind the scenes of some of her most iconic images.
“We’ve always said, she’s the only person we know that has a direct line between heaven and earth,” Inez van Lamsweerde says of
Björk
, the Icelandic artist whose 20-year retrospective opens at MoMA this Sunday. For the past 16 years, van Lamsweerde and Vinoodh Matadin (aka
Inez & Vinoodh
) have collaborated with Björk on nearly every one of her albums, and a spin through the museum show will reflect that: Look for album covers from Biophilia (2011) and Vulnicura (2015), or the hairpiece created for Medulla (2004). The three first met in 1999, when Björk asked the photographers to visualize the cover of her compilation Volumen. “From that moment on, we’ve had this connection that almost doesn’t need any words,” van Lamsweerde says, describing a process that begins with Björk sending over clips of videos, images, and bits of songs for inspiration. Though this exhibition won’t be Bjork’s inaugural appearance at MoMA (last year, her Biophilia app became the first in the museum’s permanent collection), it will be the first time her work has come together in this volume—tapping two decades and eight full-length albums by way of videos, instruments, songs, costumes, and objects. In anticipation of the retrospective, I spoke with van Lamsweerde about all things Björk, from their first shoot together to January’s cover of T: The New York Times Style Magazine. 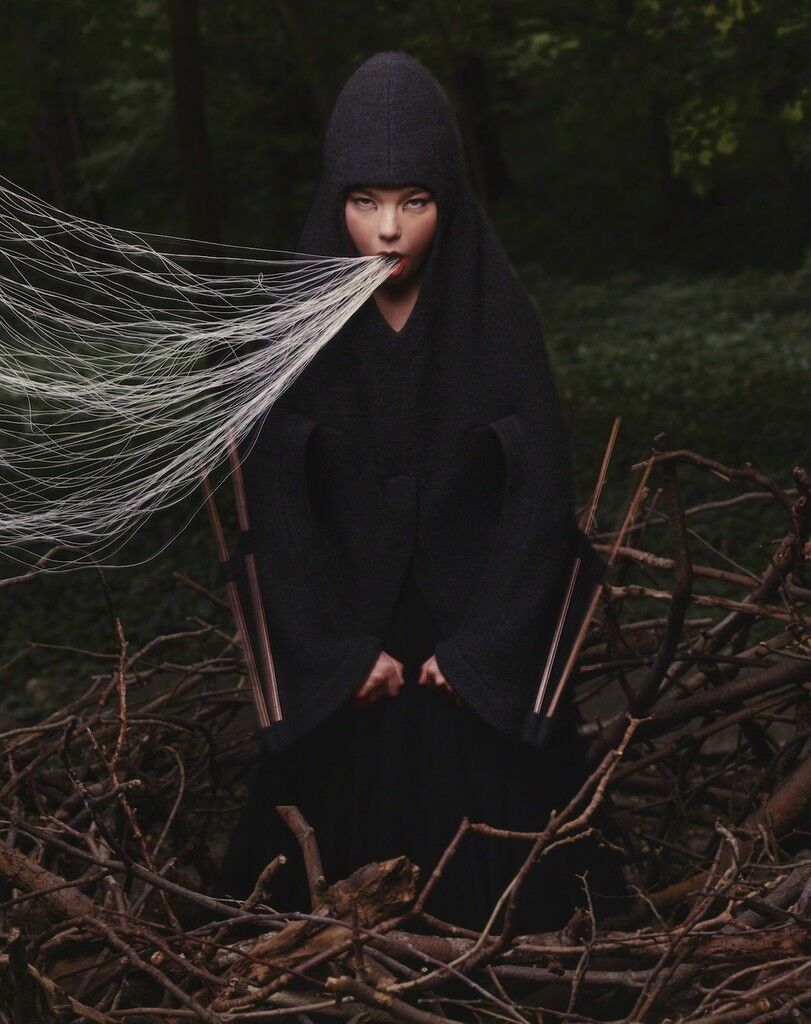 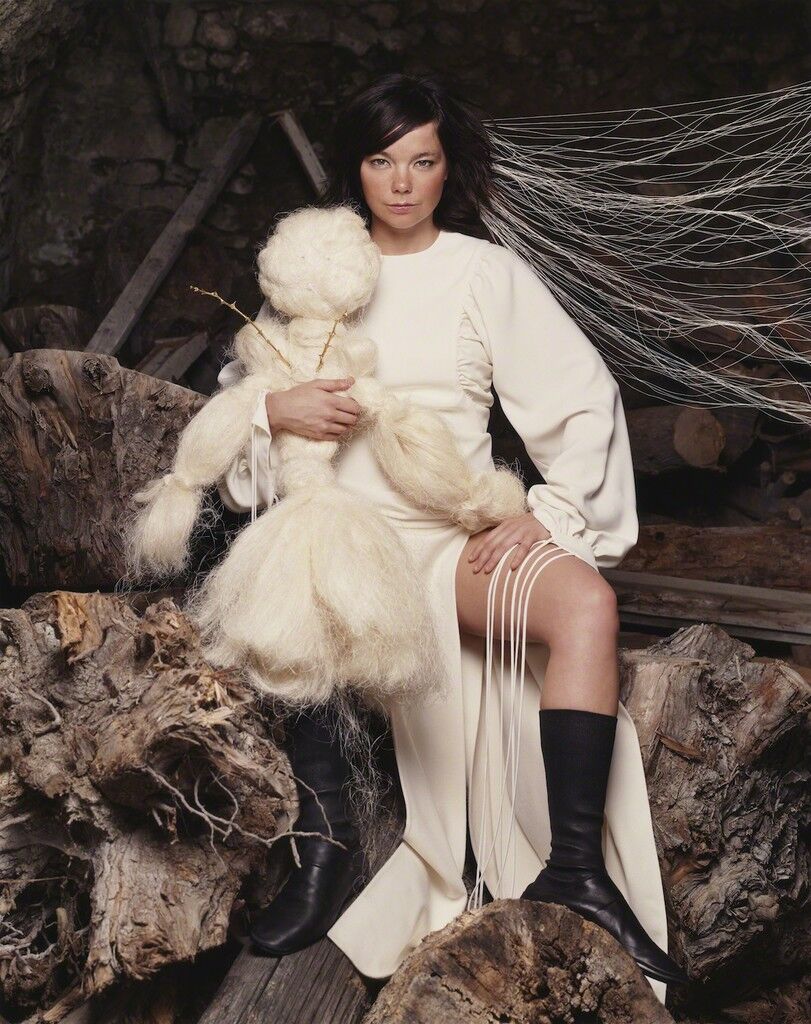 Inez & Vinoodh
Björk - Volumen, 1999
Gagosian Gallery
“We shot these pictures in France in an estate very close to Monet’s garden,” Lamsweerde says, describing the front and back covers of Volumen, the DVD compilation that Björk released in 1999. “In the first image, Björk is holding this doll made out of rope. At the time, I had found a book called The Secret Life of Dolls, filled with images of dolls, beautifully photographed throughout the century. There was one made out of rope, and I was so touched by it somehow, so Michael and Mathias [Michael Amzalag and Mathias Augustyniak, founders of renowned graphic design studio M/M (Paris)] made this doll based on the image. Björk was also looking at all of these tarot cards, and she sent me images of decks of cards that she found, inspired by sorceress imagery. In the other image, she has these threads coming out of her mouth that symbolize emotions and feelings. Michael and Mathias constructed a device with the threads that she could hold in her mouth. We probably could have done that through Photoshop, but Björk is not someone that separates life from performance; it’s all one thing.” 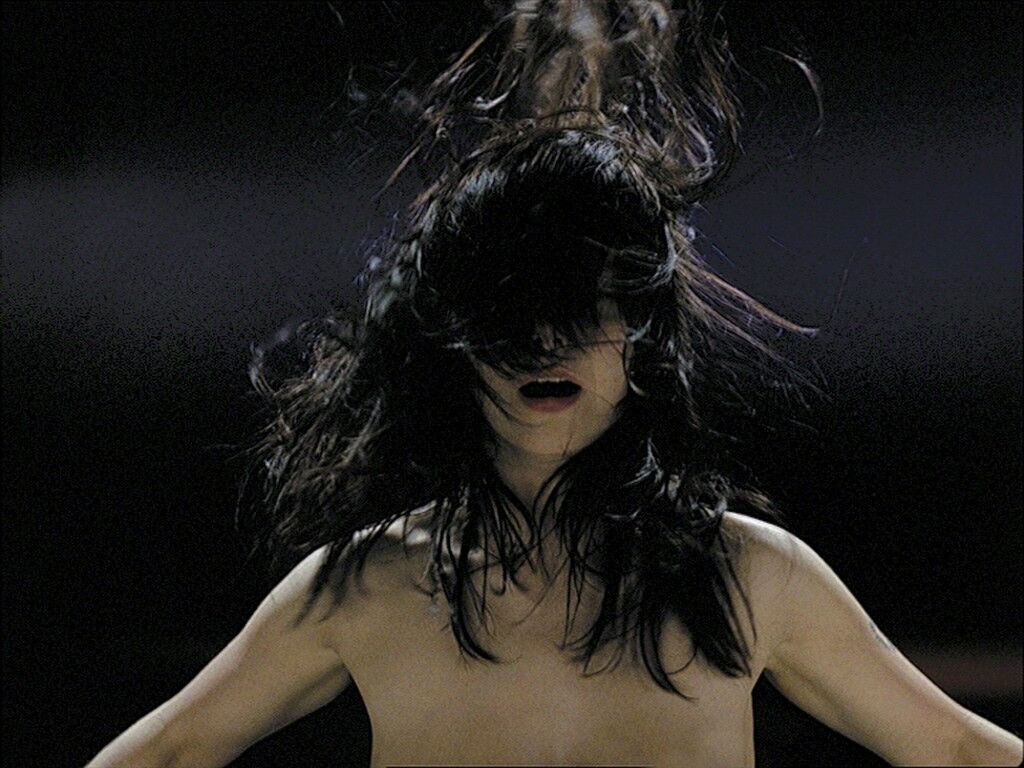 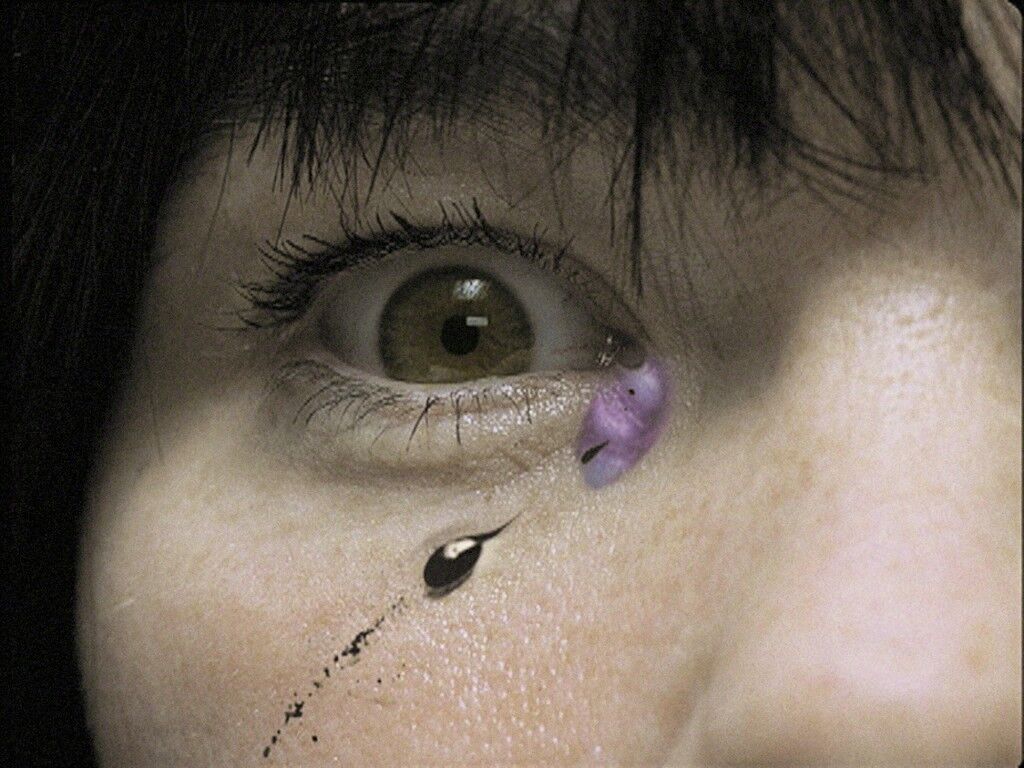 Inez & Vinoodh
Björk - Hidden Place, 2001
Gagosian Gallery
Advertisement
“This was right after Volumen, and Björk knew we had never made a video in our lives,” van Lamsweerde says of the video created for the lead track of Björk’s fifth album, Vespertine. “She was like, ‘You know what? This is my most special song. And I know you guys can visualize exactly what it is about. I think it’s a good step for you to move into video, and I’m here to support you in doing that.’ It’s amazing to work with Björk because she’s so trusting and so completely open, because she knows that there’s some kind of direct line through which we communicate. For us, that was a very touching moment.” 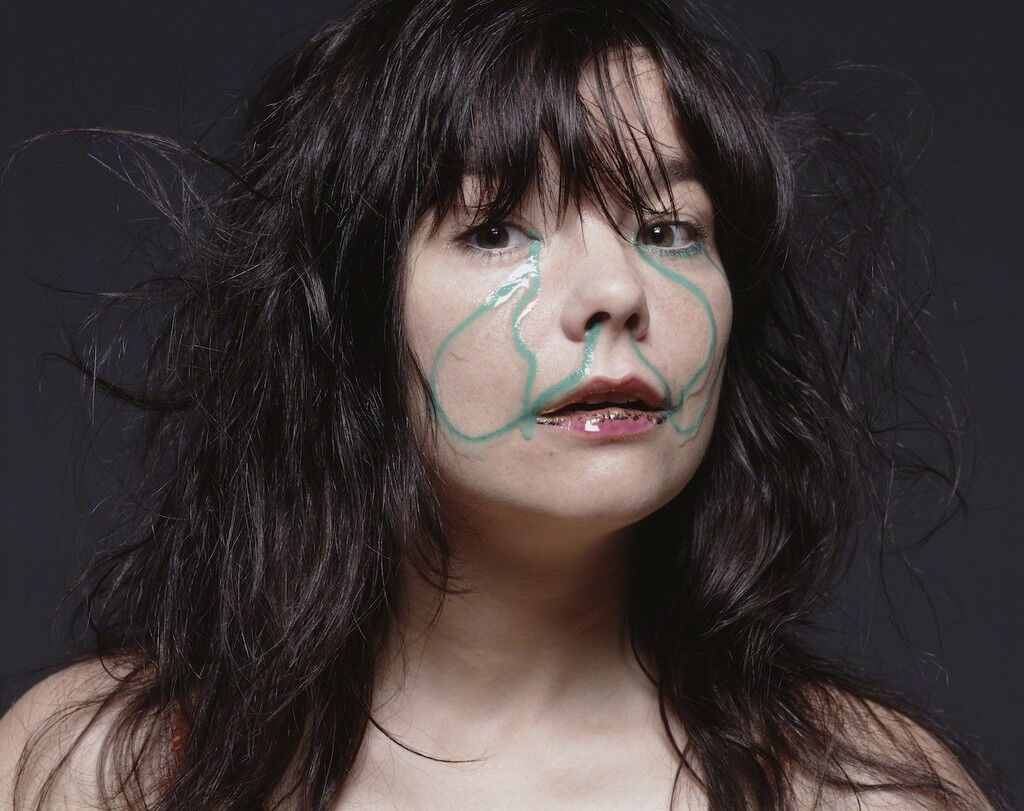 Inez & Vinoodh
Björk - Poisson Nageur, 2000
Gagosian Gallery
“This photo relates to the [Hidden Place] video, where Björk has these tears drawn onto her face. It’s one of our favorite images that we’ve done with her because it was the tryout for the video in which there are all these emotions that keep changing and that run all over her face in the form of liquids. This image symbolizes that beautifully.” 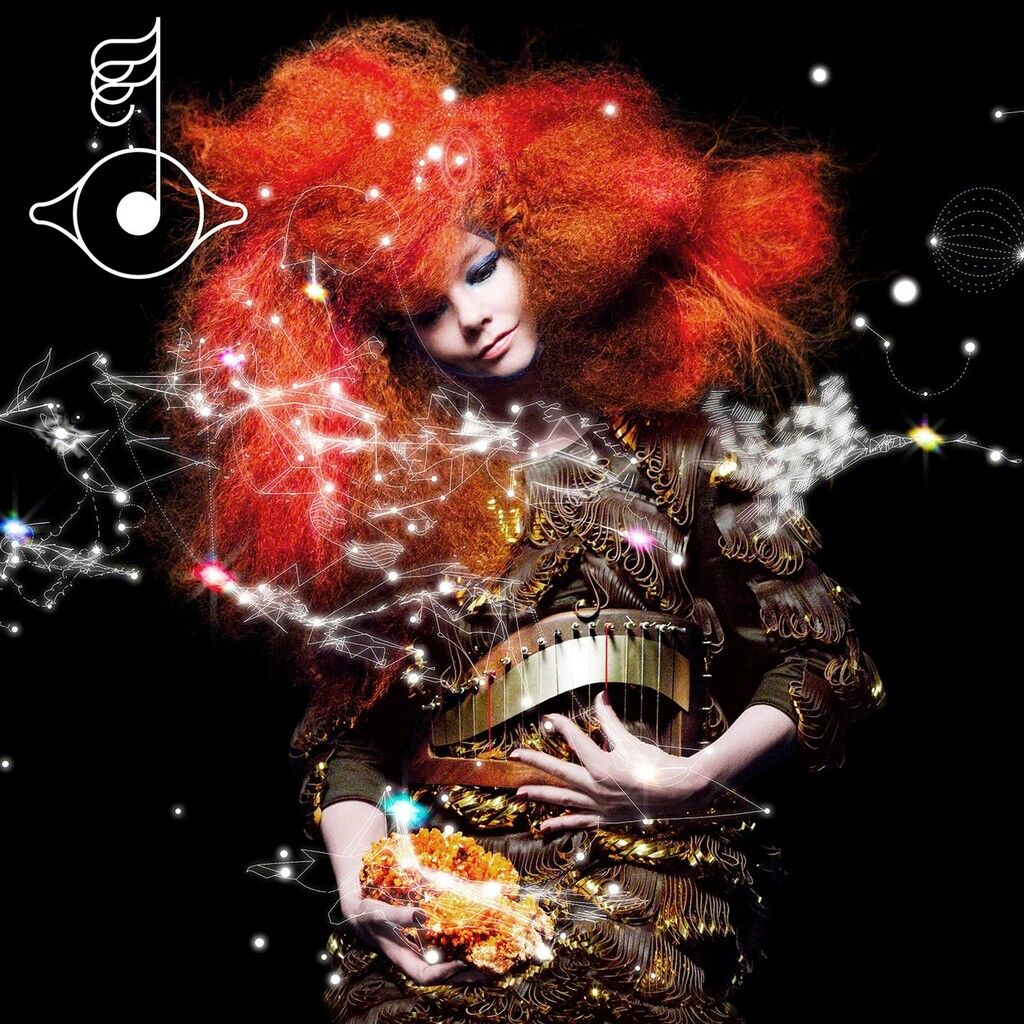 Björk
Biophilia, 2011
"Björk" at Museum of Modern Art, New York (2015)
“For Björk, this project required years of research into nature, and sounds in nature, and how those sounds could be translated into a score, maybe even into an instrument. She showed us all of her research—movies from the BBC, nature films, and all about crystals. Once we got into the studio to shoot the album cover, it was very important to Björk that we create the ‘Biophilia’ character, like we’ve done for every album, which is the persona that she would be on tour and in everything related to the album. A few things were very key to her: certain colorful elements, like copper, and different stones. So with Eugene Souleiman, the hairdresser, we created a wig based on this galactic idea of color and how Björk had described the way in which certain stones change color in heat. We decided to treat her face as if she’d found a beautiful rock and sliced it open, and inside there was this treasure. When we were shooting the album cover, it all just looked so beautiful, so we said, ‘You know, we have our camera here. Why don’t we film you singing Moon?’ It was basically two takes. Once we had the footage it was so beautiful and simple and touching, and so together with M/M (Paris) and James Marion, her creative director, it was constructed into a video.” 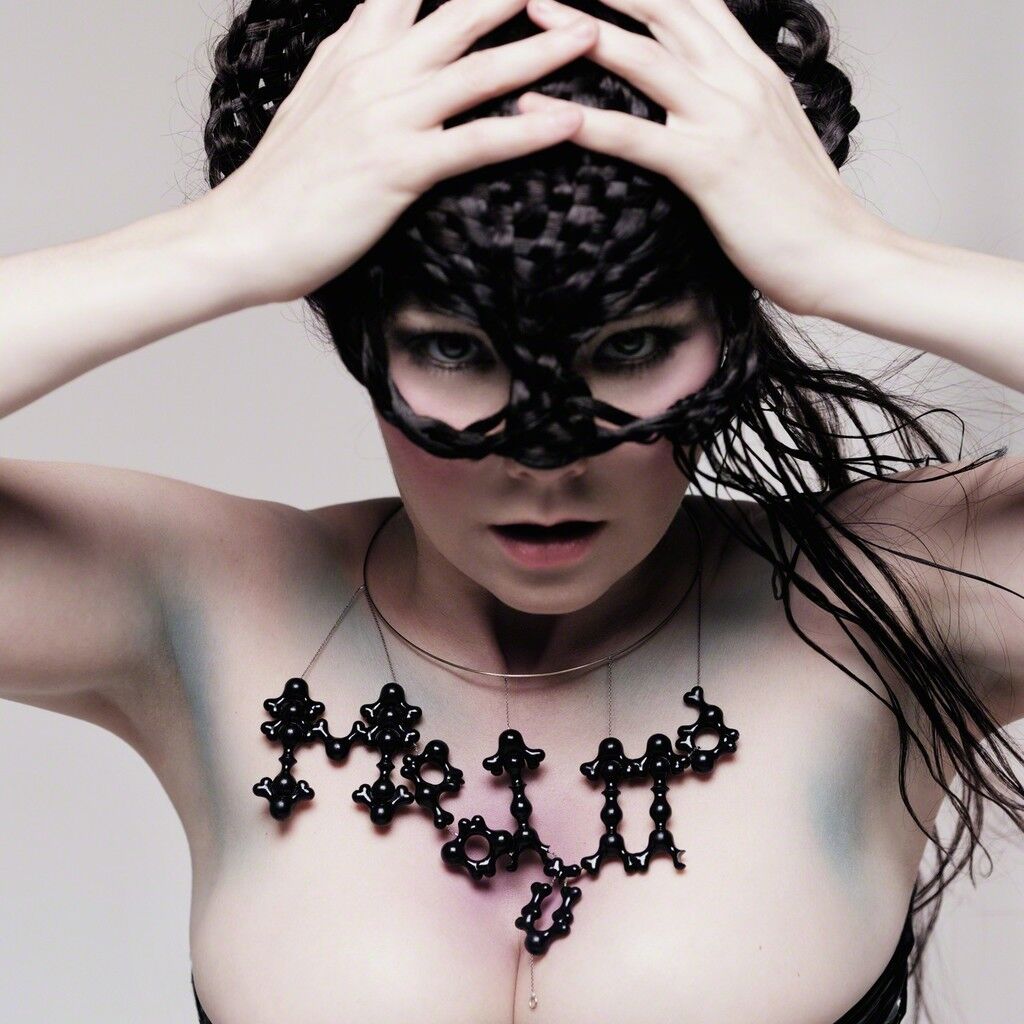 Björk
Medulla, 2004
"Björk" at Museum of Modern Art, New York (2015)
“This mask was made specifically for the shoot by Björk’s friend, Shoplifter; she’s an artist who works with hair. We were all inspired by women’s handicrafts and this idea of being in your own cocoon in your home, with your family, and this reclusive character that hand-makes the whole world around her. The image was shot in the studio in London for the Medulla album, and I think the actual hairpiece will be in the MoMA show.” 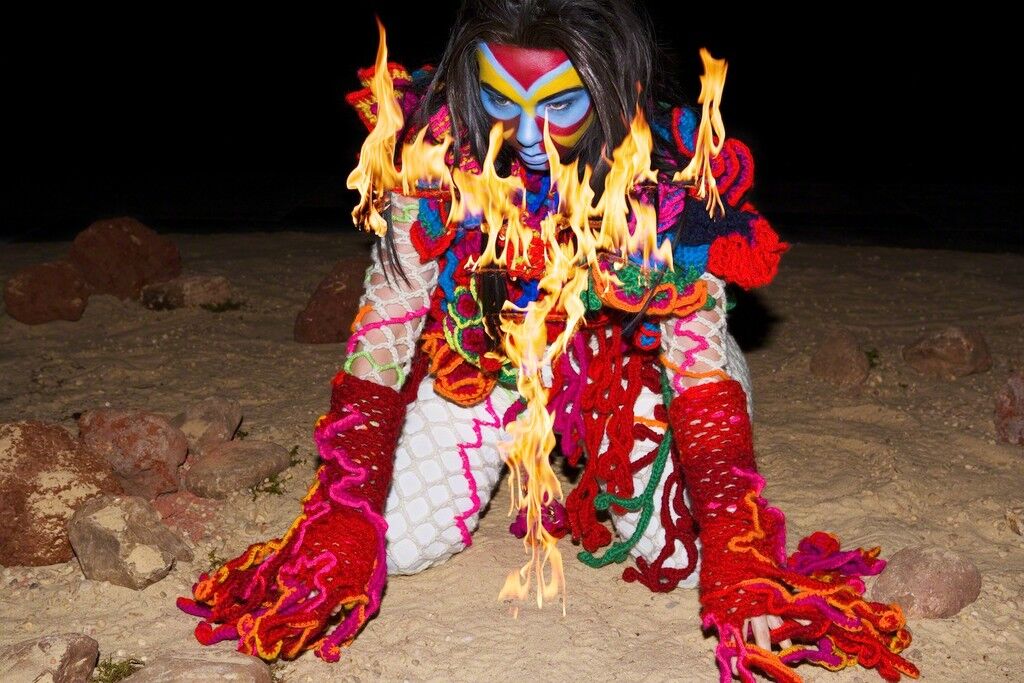 Inez & Vinoodh
Björk - Volta, 2007
Gagosian Gallery
“This was an incredible shoot. The suit that Björk was wearing was made by two Icelandic friends of hers, [the Icelandic Love Corporation], and the idea was based on this fiery, pagan earth woman. We shot it in New York in a big soundstage—it was extremely cold—and we were in a giant, airplane-hangar-sized space and had her just move and dance around, like a pagan ritual. We photographed all the flames separately; that’s why we had to shoot it there, because we had to be somewhere where we could light a fire without causing any accidents. Later on, we computer-constructed the letters V-O-L-T-A out of the flames and put them over the images.” 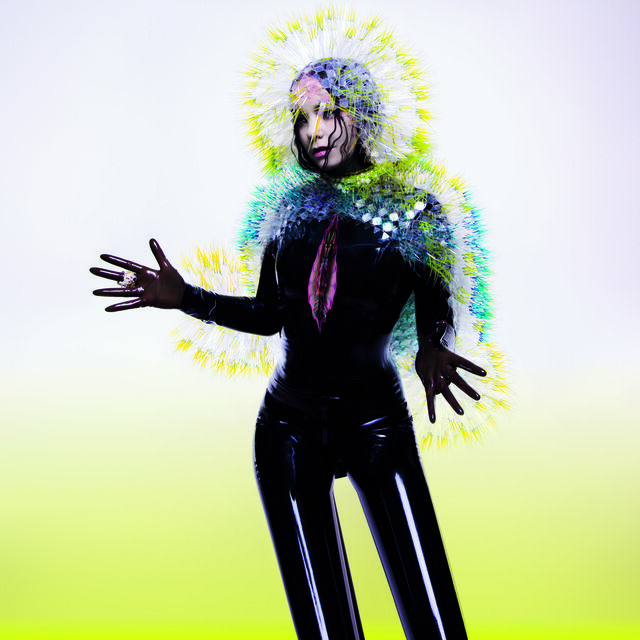 Björk
Vulnicura, 2015
"Björk" at Museum of Modern Art, New York (2015)
“Björk sent a beautiful video of a spider molting out of its own skin and becoming translucent, and then filling up with color again. For her, that was really the basis of the imagery around this album, this transformation and soft, waxy, yellow-pink coloring—and again, the idea of having emotions circling around her. She said she wanted to have a wound on her body, on her heart area, in an abstract way. From there, we worked with our stylist Mel Ottenberg on the character, and that’s when he found this black latex suit and the headpiece by a Japanese designer [Maiko Takeda], which she’d already worn once on stage. We constructed her persona with her on set—imagine you’re Mata Hari, a seductress, but you’re wounded, and there is an incredibly alluring softness around you. When we were photographing her, I said ‘Why don’t we pick a song and film you performing it, and see where that leads,’ just like we did with Moon. We filmed her as she performed Lion’s Song, off the album, and now we’re in the process of creating the edit and post-production for that video which will hopefully come out around summertime.” 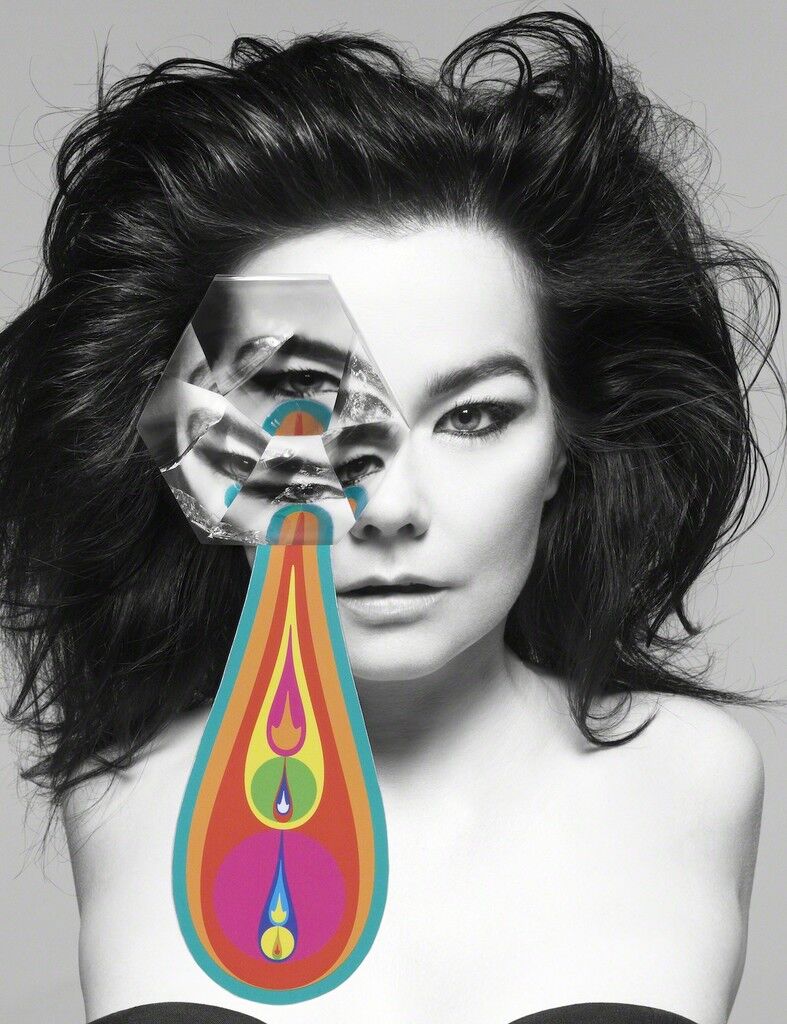 Inez & Vinoodh
Björk - Interview Magazine, 2009
Gagosian Gallery
“We did this cover for Interview Magazine with M/M (Paris) when they were art directors for Interview. I don’t think Björk has ever looked that glamorous in her life; it was a new way of looking at her, because the image was not necessarily related to an album or specific project of hers—we saw her less as a character from these different elements pieced together and more as this great beauty. I remember saying to her, ‘Put your chin down, eyes on the camera,’ because she has this innate habit of wanting to stretch her neck up. I kept saying, ‘Down, down, down.’ It was very different for her in every way, and for all of us—but I love the image so much. M/M (Paris) re-photographed the image with a prism over her eye and made a giant colored tear coming from that big eye. We saw her more as—for lack of a better reference—Elizabeth Taylor, or Maria Callas, with a great deal of glamor and this deep, strong, almost operatic presence. She kept playing Om Kalsoum’s record while we were photographing her.” 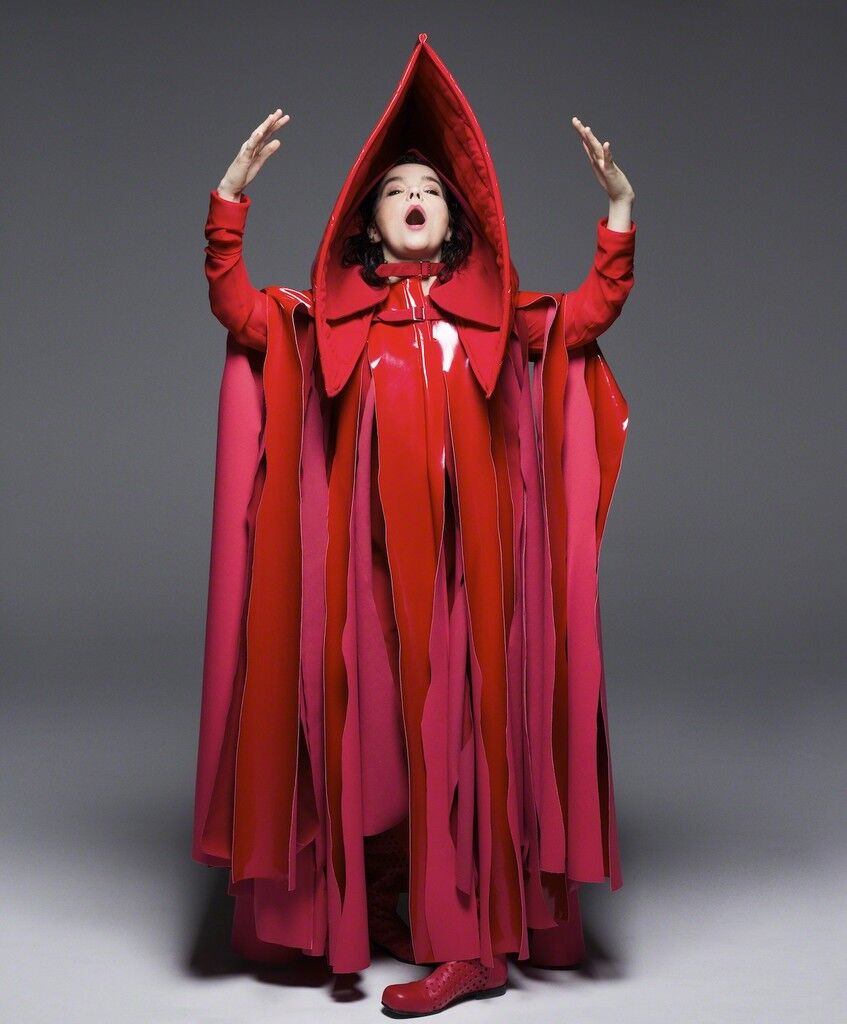 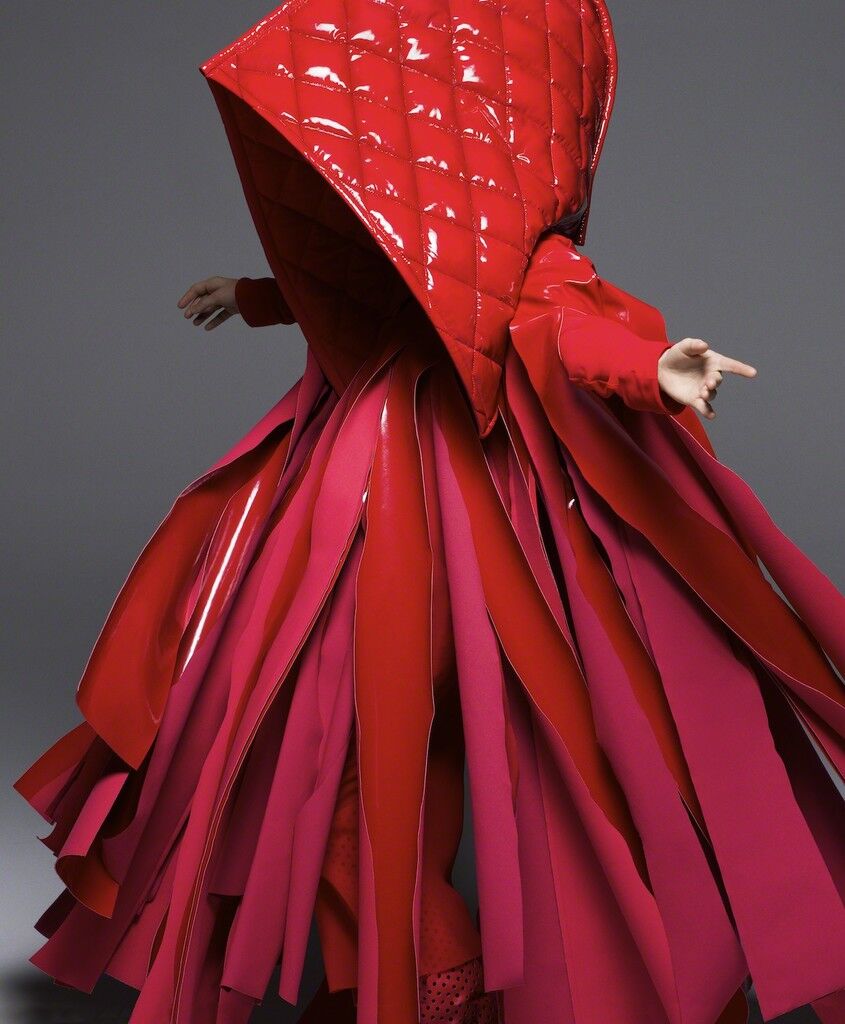 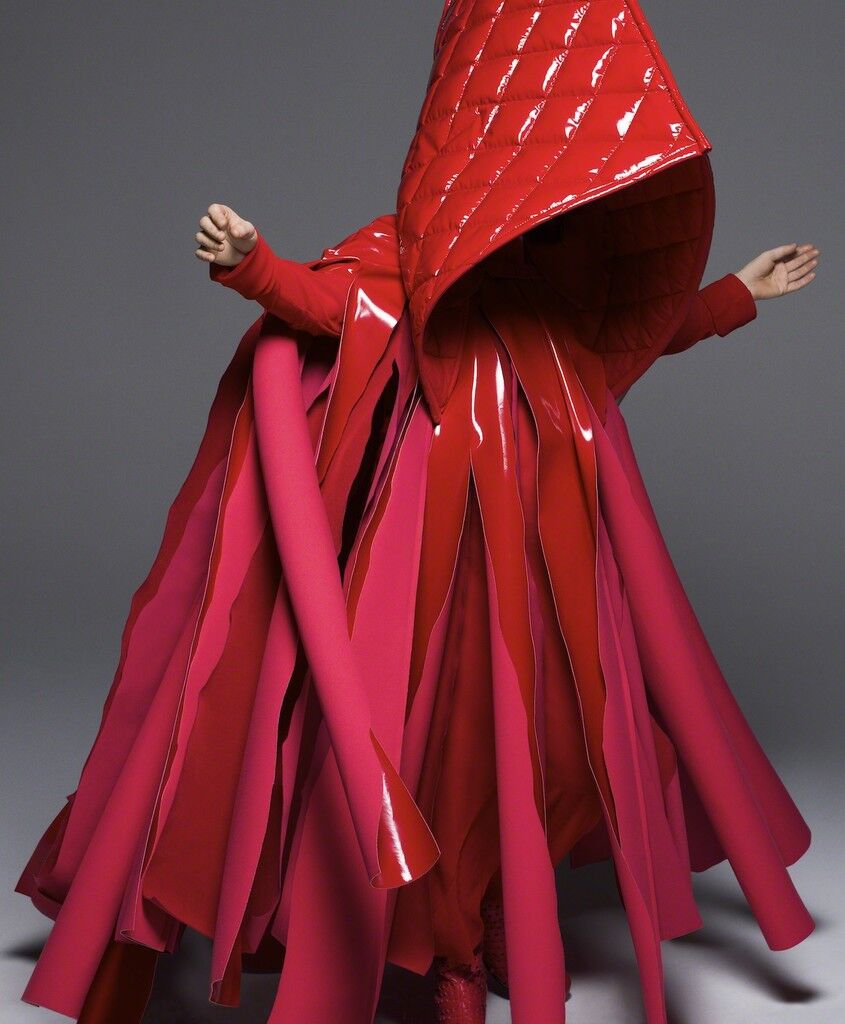 Inez & Vinoodh
Björk - T Magazine, 2015
Gagosian Gallery
“It was the same stylist, Mel Ottenberg, who found the red Comme des Garçons cape. Again, there was a lot of talk about materials—the glossy and the matte, and the waxy and the dry. When he found this look and sent it to Bjork, immediately she was like, ‘That’s it. That is 100% perfect.’ The moment she wore it, she started spinning around and making these abstract, beautiful [shapes]. Her expression is so full of life and her attitude says, ‘I’m back here, and I’m ready to step out into the world.’ Again, it was a very touching and beautiful experience for all of us to find Björk—the same with Interview Magazine—as the beauty that she is, and not necessarily symbolizing an album.”
Molly Gottschalk is Artsy’s Lead Visuals Editor.
Björk is on view at the Museum of Modern Art, New York, March 8–June 7, 2015.
Browse more work by Inez & Vinoodh at Gagosian Gallery.
Related Stories