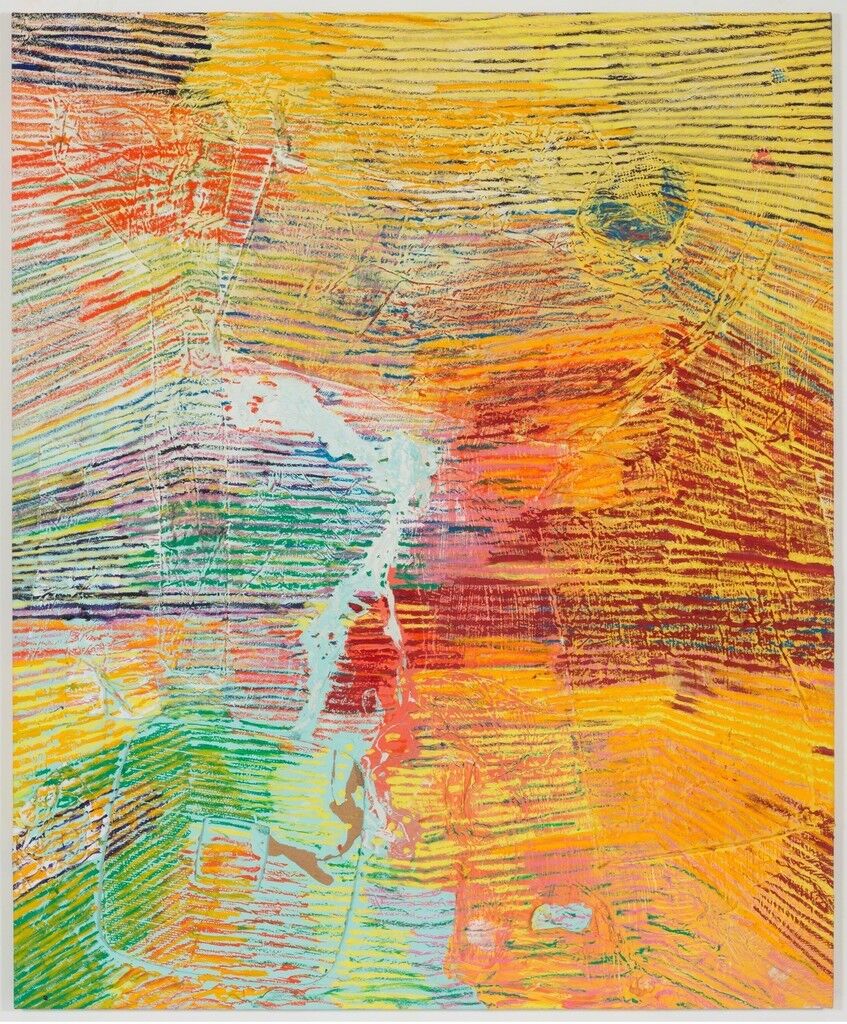 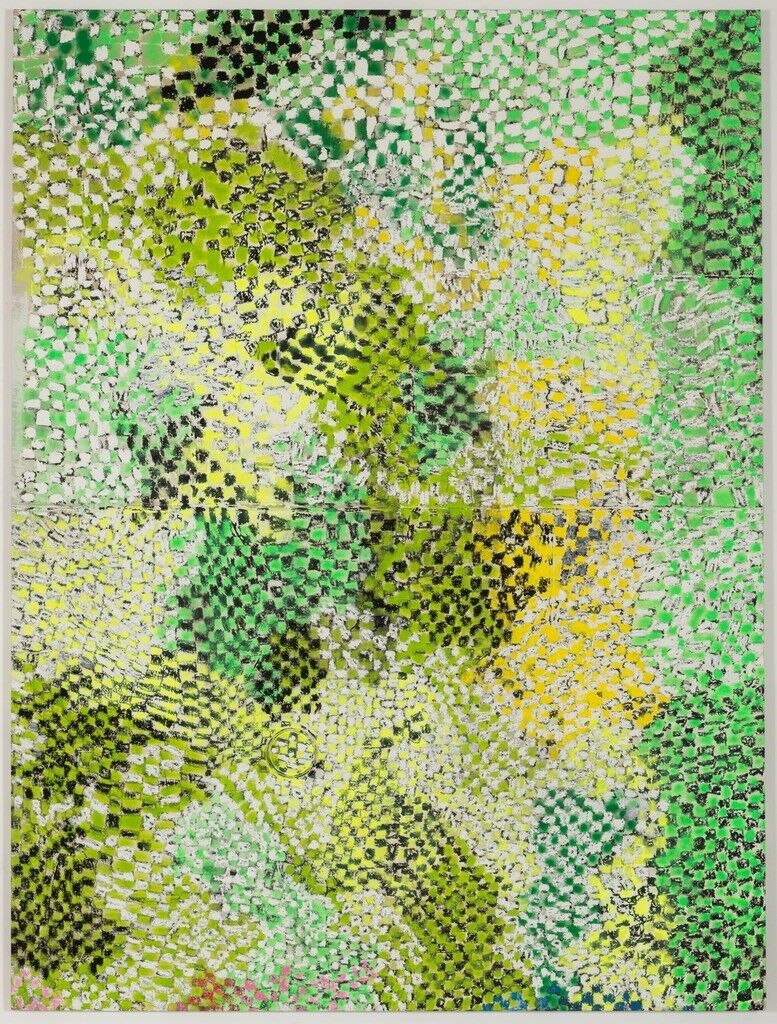 Harmony Korine
Fex Chex, 2014
Gagosian Gallery
As a filmmaker, Korine has been recognized for his innovative cinematic style for more than 20 years, with awards and nominations from a number of prestigious film festivals. His movies—such as Spring Breakers (2012), Gummo (1997), and Kids (1995)—are considered cult classics and have been highly influential for a generation of young cineastes. Although he is less known for his paintings, he has been showing them internationally since the late ’90s, along with
experimental video
and
collage
work, and was featured in the Whitney Biennial in 2000. Now at Gagosian Gallery, Beverly Hills, Korine presents “Raiders,” a new series of paintings developed over the past several years. 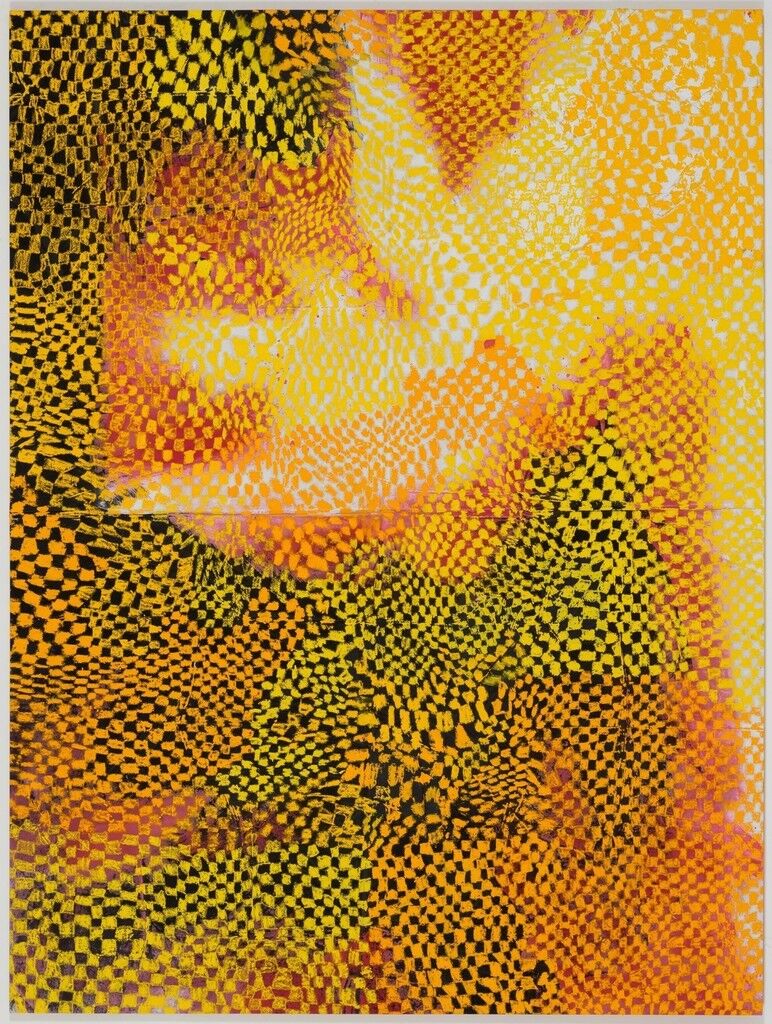 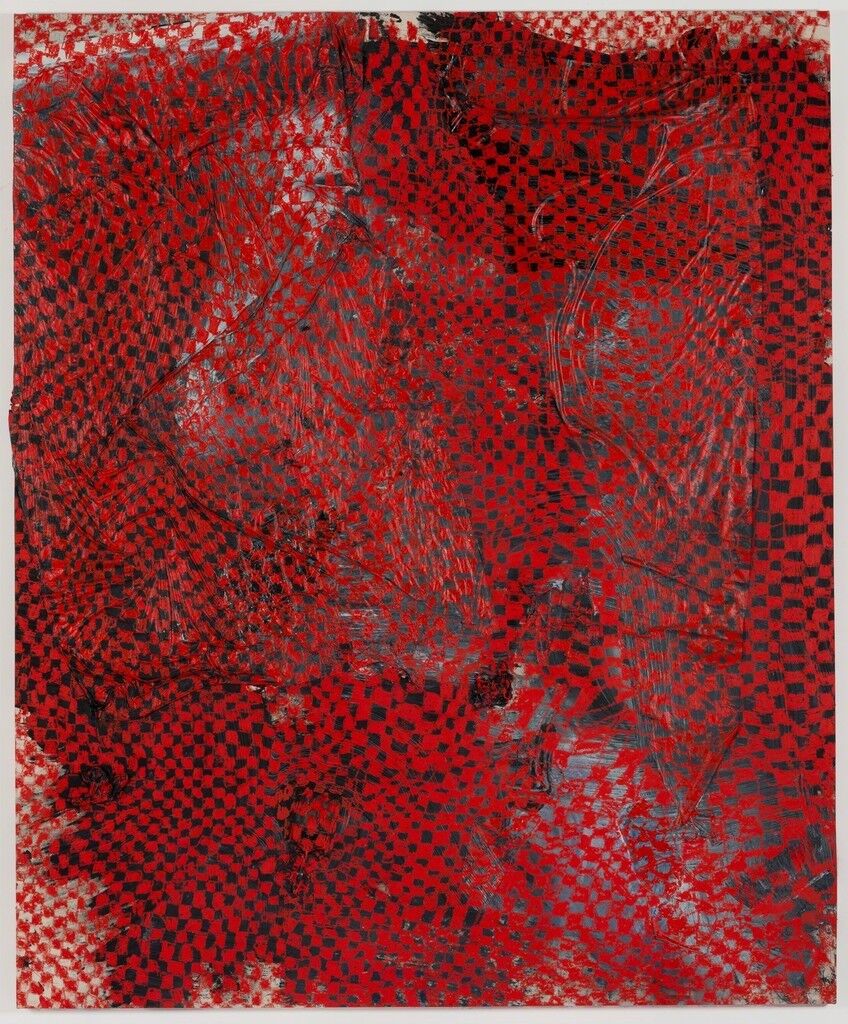 Harmony Korine
Special Needs Chex, 2014
Gagosian Gallery
Earlier in his career, Korine worked in an expressive, primitivist style, often
featuring figurative
imagery. The new works in “Raiders” are far more abstract. In one set of paintings, tapestry-like checkerboard patterns cover the image’s surface. Called “chex” paintings, they suggest hidden imagery beneath a veil of color. In Skinamax Chex (all 2014), a field of orange and yellow checks in painterly waves flutters over a field of black and white. The title alludes to the cable channel Cinemax’s notorious nickname, and the formalist texture insinuates the presence of a human body. Special Needs Chex is nearly
monochromatic
, with a rich crimson surface over brushy, pinched marks in grey, black, and white. The
color field
scrim in these paintings occludes clear readings in a manner similar to the non-linear storytelling of Korine’s movies, and to the semi-familiar/semi-foreign
patterns
found in works by
Michele Grabner
or
Yayoi Kusama
. 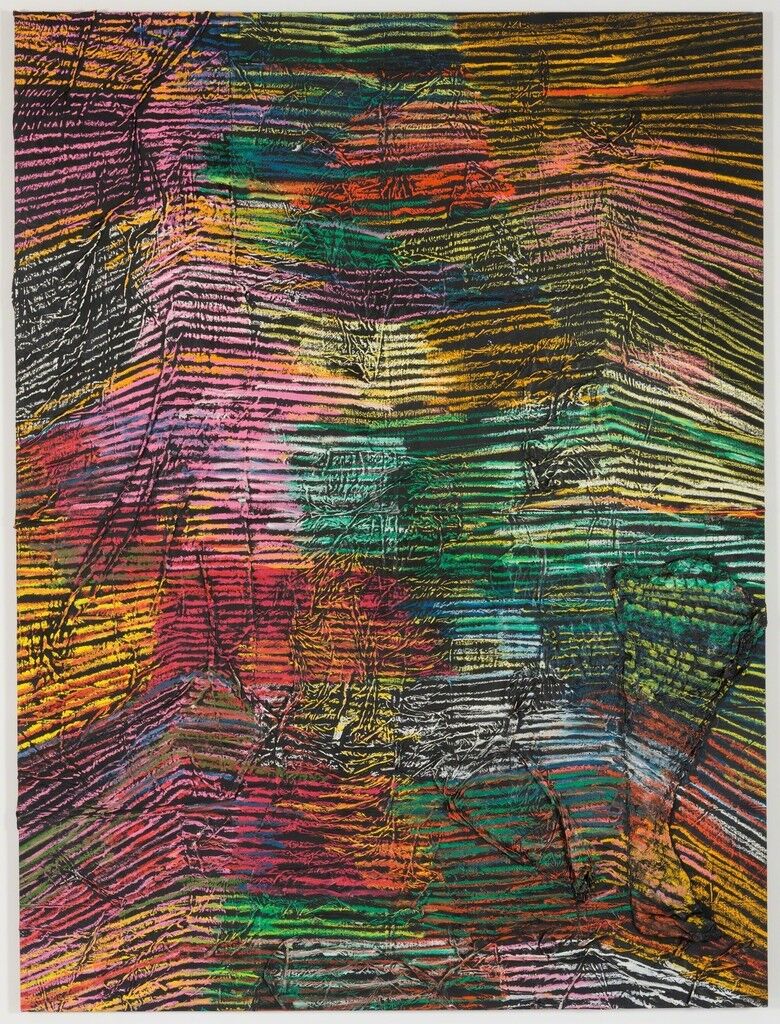 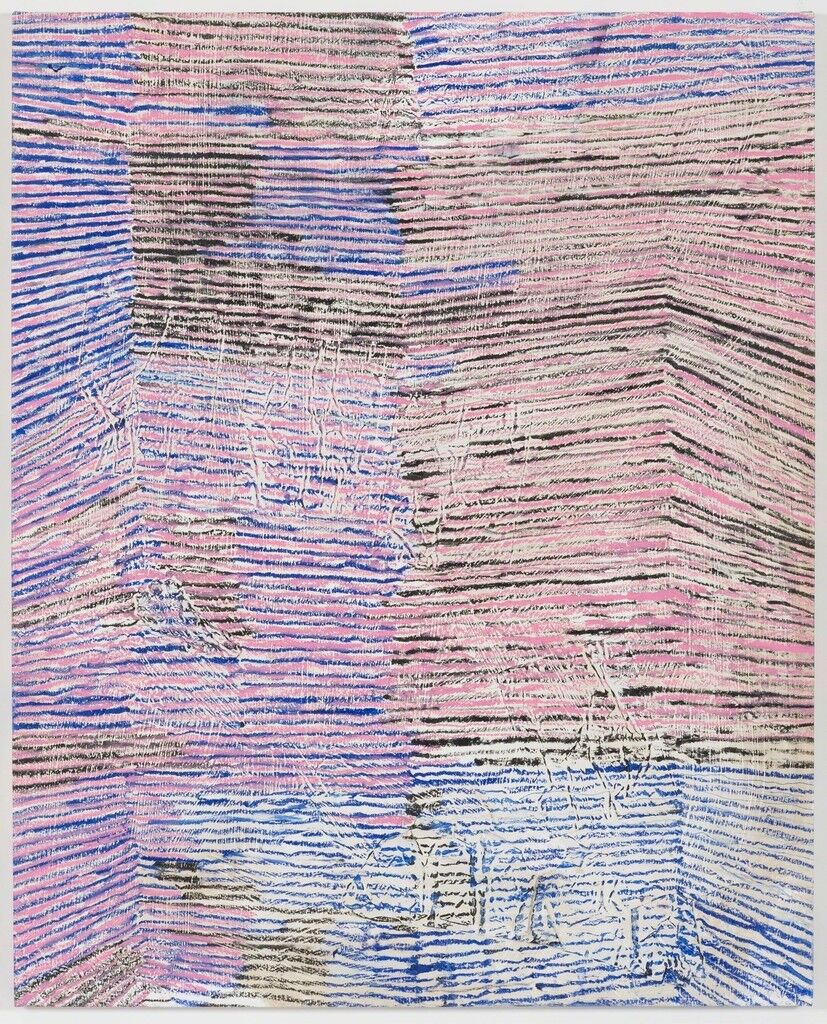 Harmony Korine
Nudity Clause Line, 2014
Gagosian Gallery
Advertisement
In another series, Korine uses lines in a manner similar to his checks, such as Nudity Clause Line and Scubby Line. In these he becomes far more liberal in his use of color, covering the textured canvas with pink, yellow, green, and blue lines that dance over the surface. They resemble prints by Jasper Johns from the late 1970s and early ’80s and explore similar concerns about the dialectical relationship between images and the content they carry. Their
repetitious
development of a gesture mimics the way similar images can be repeated and accumulate in film or video. 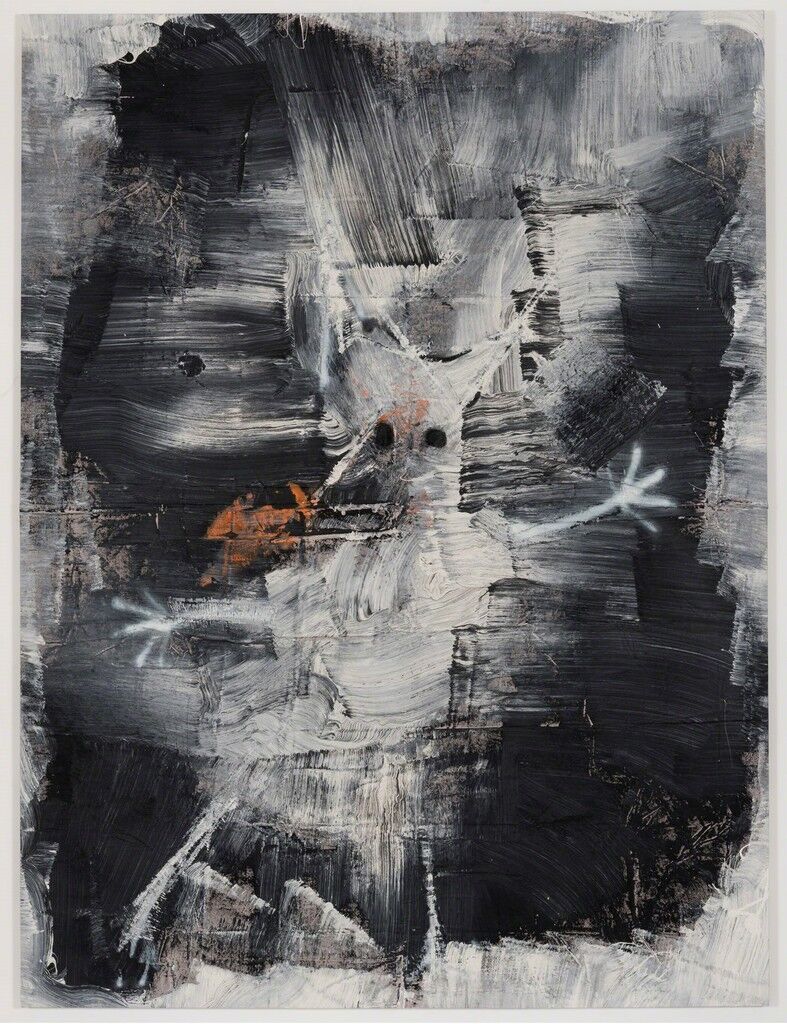 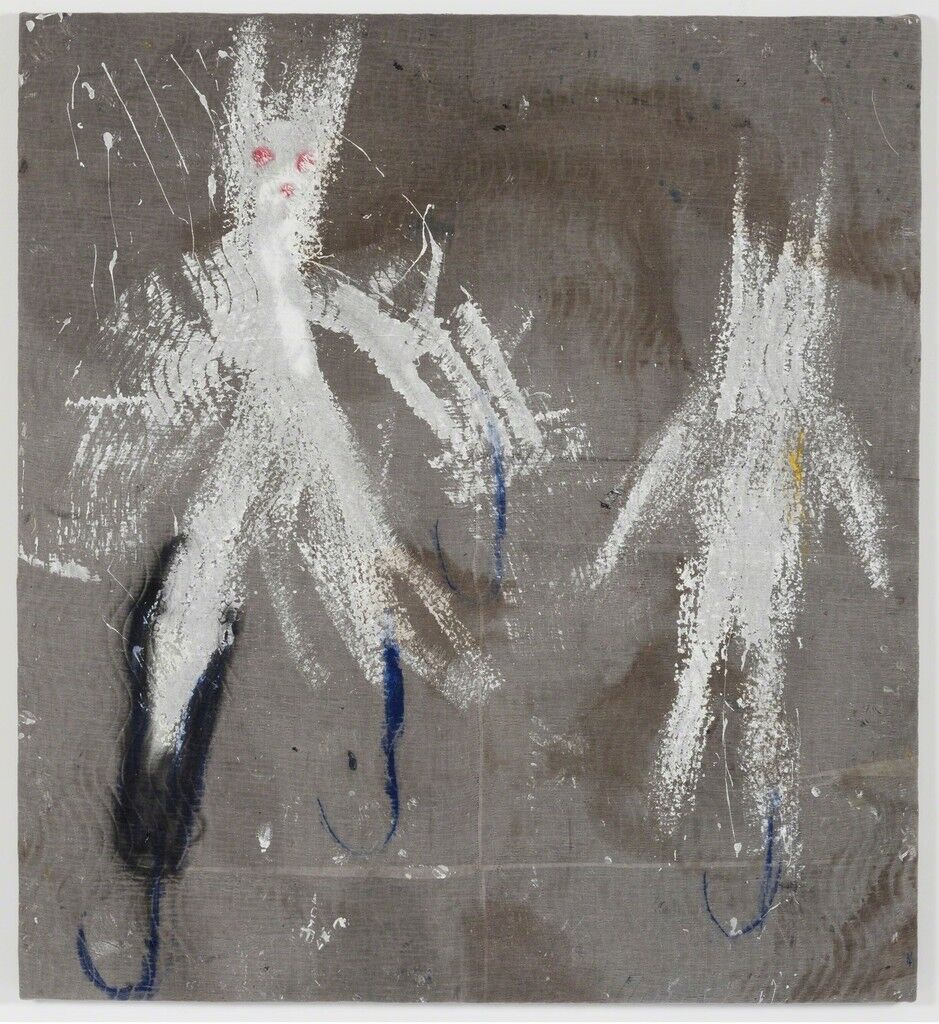 Harmony Korine
Little Shawskank, 2014
Gagosian Gallery
Many of Korine’s paintings make strange reference to figuration—and to themselves. Creol Teen Revolutions pokes fun at the pidgin-like titles he uses. Its painterly marks and scrubbed-in figure make more explicit the sort of images that are only hinted at in his other works and resemble the kinds of cryptic characters and images frequently found in his movies. As an extension of his filmic practice, Korine’s paintings stand as counterpoints—still images of the artist’s world, expressive and moving in their own.
—Stephen Dillon
“Harmony Korine: Raiders” is on view at Gagosian Gallery, Beverly Hills, Jan. 10–Feb. 14, 2015.
Follow Gagosian Gallery on Artsy.
Related Stories