Artsy Editors
Mar 11, 2015 7:09pm
In celebration of the 20th anniversary of Newark Museum’s Korean art collection, Dr. Katherine Anne Paul, Curator of the Arts of Asia, organized “Korea: Land of the Diamond Mountains” featuring works from the museum’s permanent holdings and select private collections. Dr. Paul’s vast knowledge of South, Southeast, and East Asian art is matched only by her infectious enthusiasm for Newark Museum’s impressive collection. While many equate Asian art collections to objects from antiquity, Dr. Paul sheds light on the importance of displaying works from across time periods to capture a country’s true breadth of art and culture. 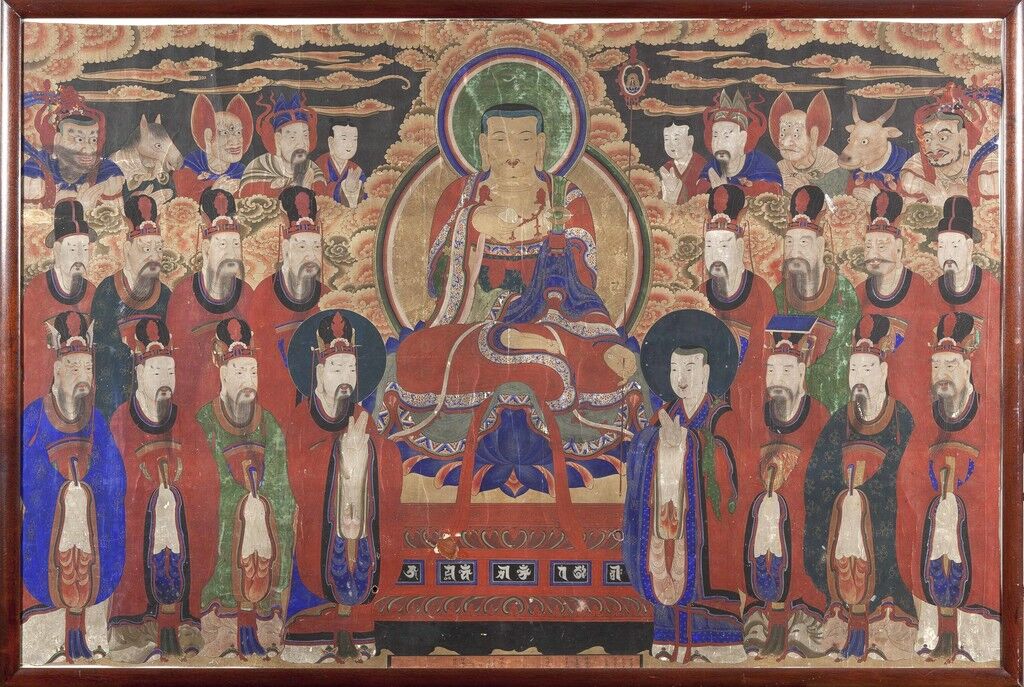 Chichang Bosal (Ksitigarbha Bodhisattva) and the Ten Kings of Hell, Late 19th or early 20th century
"Korea, Land of the Diamond Mountains" at Newark Museum (2014-2015)
Artsy: Although many may not know this, the Newark Museum is a pioneering institution for Asian art. For instance, in 1911, it was the first to display an exhibition solely dedicated to Tibetan art. Could you tell us more about the museum’s history in collecting Asian art?
Katherine Anne Paul: In 2011, we celebrated the 100th year of the Tibetan collection, but it’s not just Tibetan art that we’ve been pioneering. When the museum was founded in 1909 we had 3,000 mostly Chinese and Japanese works of art. As early as 1923 we organized an exhibition of Chinese art that traveled to 17 other U.S. cities, and in 2013, we celebrated 90 years of putting on special exhibitions of Chinese art. 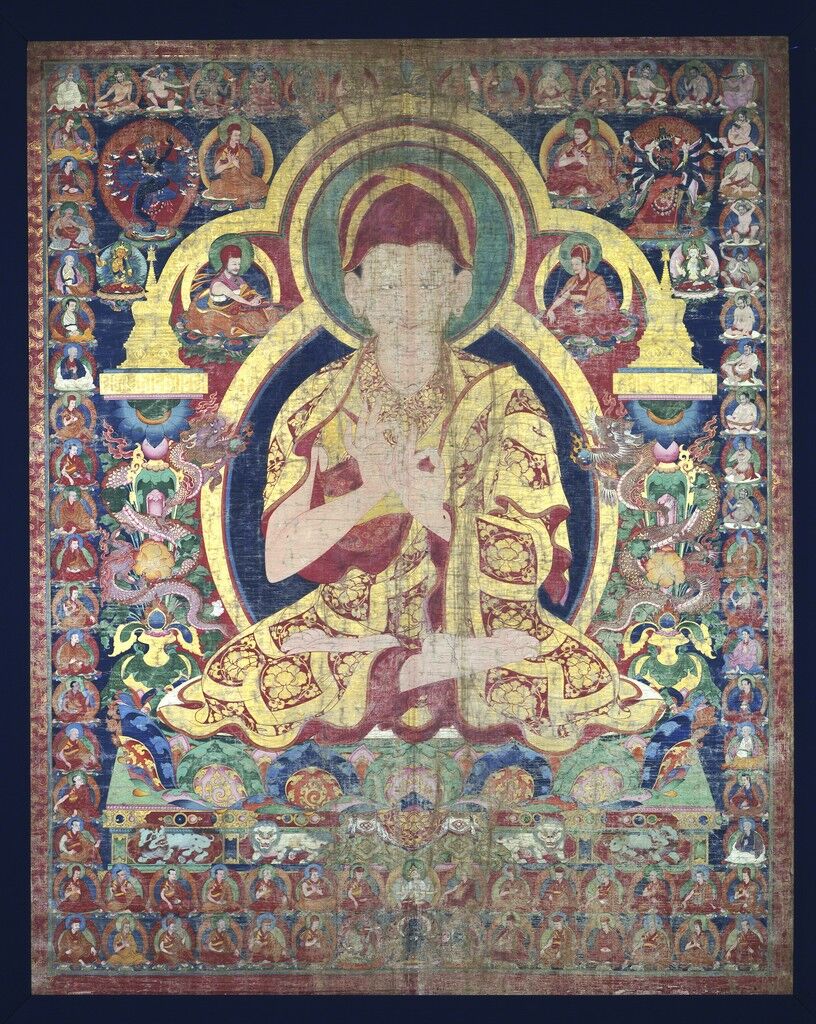 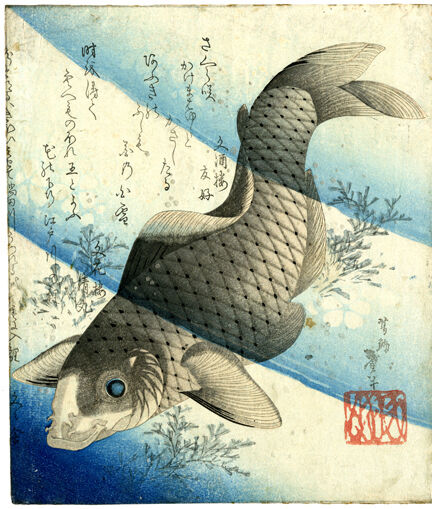 Katsushika Taito II
Carp and Poetry, 1615
Newark Museum
Advertisement
Artsy: This year marks the 25th anniversary of the museum’s Korean galleries. Can you tell us how the collection has expanded and changed over the years?
KP: The Korean art collection is one of the most diverse collections of Korean art in the United States. We have costume, textiles, paintings, furniture, works on paper, folding screens, and hanging scrolls in the collection. We also have a strong collection of historic Gaya-, Silla-, Goryeo-, and Joseon-period ceramics as well as contemporary ceramics. It’s an incredibly well-rounded collection. 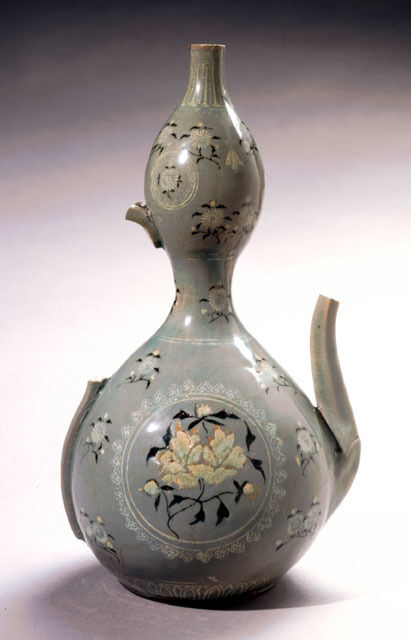 Double-Gourd Pitcher with Peony and Chrysanthemum Motif, 918
"Korea, Land of the Diamond Mountains" at Newark Museum (2014-2015) 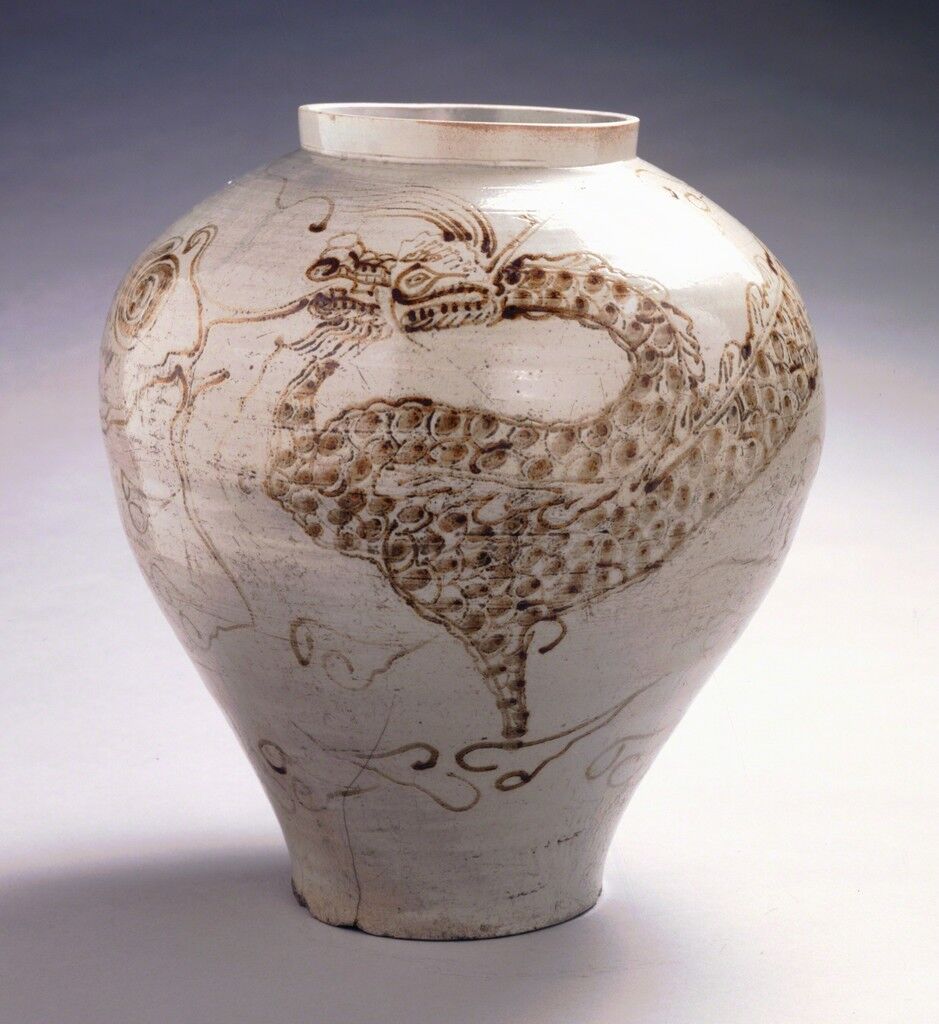 Dragon Jar, c. 18th century
"Korea, Land of the Diamond Mountains" at Newark Museum (2014-2015)
Artsy: Will there be any special events around the 25th anniversary exhibition at Newark Museum during Asia Week?
KP: On Saturday, March 14th, we will have a Korean festival day where we will have Korean music and dance performances. Activities for kids of all ages will be held, including traditional Korean games to play and art-making activities such as kite-making and calligraphy.
On May 7th, Dr. Maya Stiller will be presenting a lecture on Joseon Korean Buddhist art, comparing Korean Buddhist art with Tibetan Buddhist art, which often share similar elements. I’m very excited to invite Dr. Stiller to Newark Museum. She holds two PhDs from Freie Universität Berlin and UCLA, and now teaches at the University of Kansas, which has one of the strongest programs in Korean art in the country.
Artsy: Returning to the museum’s Korean art collection, I was really impressed by the variety of objects in your galleries. Having spent time in Korea myself, I can tell that you curated the gallery with great care for all the different objects in the collection. For this new anniversary exhibition, did you have a particular curatorial approach in mind?
KP: Yes, I wanted to show the grand history of Korean art as well as the diversity of the subject matter. We rank number five in the nation for hosting school groups from preschool, grade school, high school, college, and graduate classes, as well as teacher training. I installed the galleries in a way that students of all ages could get a sense of the amazing history of Korean art, parallel to the way that we try to present art in other regions of Asia and the world. I wanted to show not only historic but also contemporary ceramic traditions, and to introduce the diversity of religious art in Korea. We do feature objects from Korean Buddhist art, Korean shamanic traditions, and Korean Neo-Confucian traditions and hope one day to add appropriate elements of Christian Korean art.
I also wanted to present art that was not specifically or explicitly religious art, so we showcase courtly art, including Joseon-revival furniture and the Joseon ceramics. We will also be rotating different Buddhist and shamanic paintings, as well as literati hanging scroll paintings of bamboo, butterflies, calligraphy, and other subjects that illustrate Korean painting traditions. 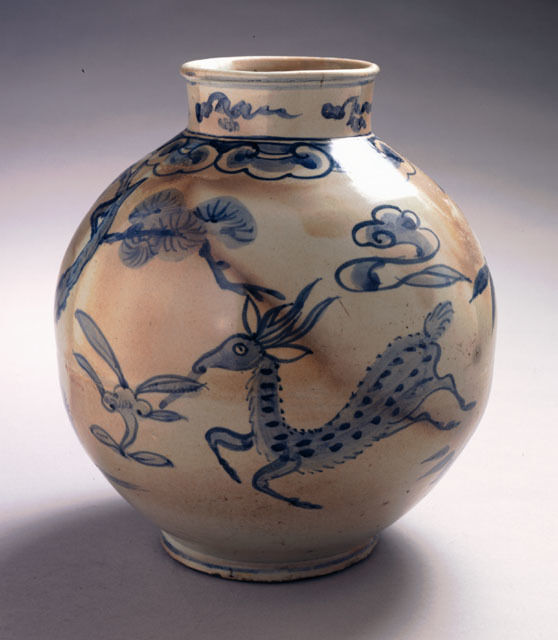 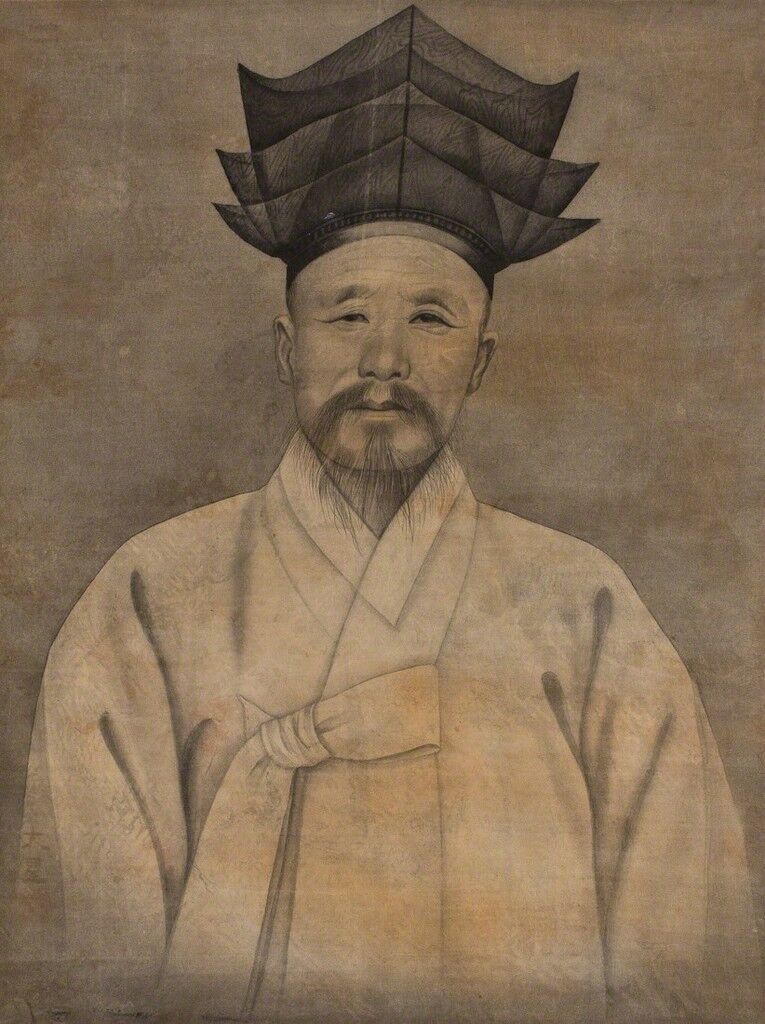 Portrait of an Elder with Confucian Hat , Early 20th century
Newark Museum
Artsy: Are there any highlights in the Korean art collection that you’re particularly fond of?
KP: Yes. One of my favorite works in the collection is a longevity stele. Inscribed on the stele are wishes for the king’s longevity. It is an incredibly rare piece, and it is beautifully carved with undulating dragons and very full, lush lotuses. It’s a major highlight in our collection. 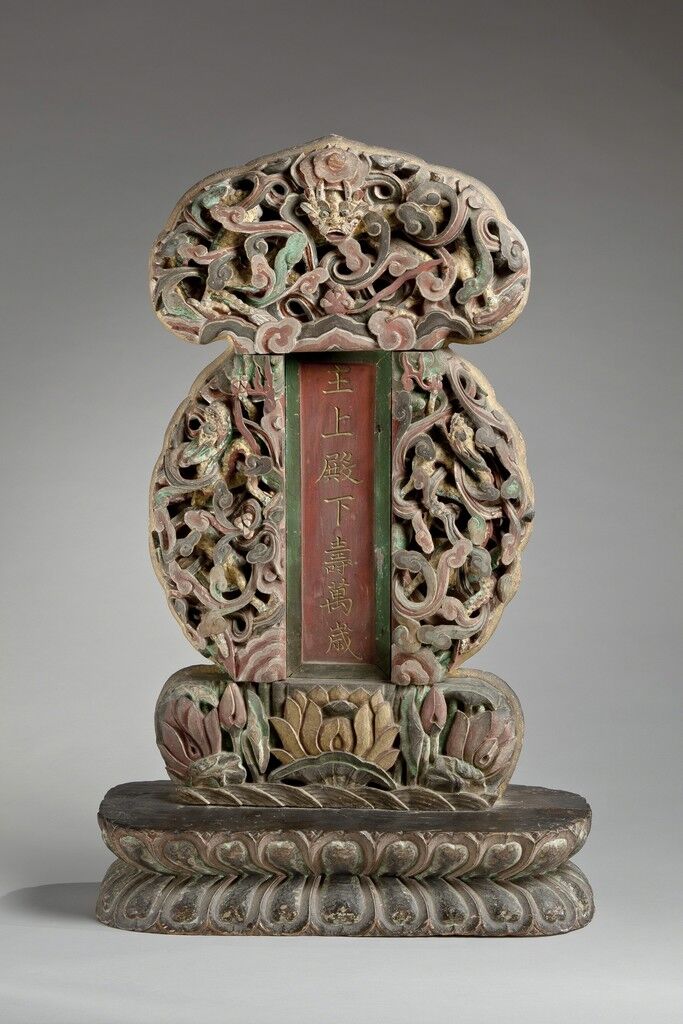 Longevity Tablet with Dragon and Lotus Motifs, c. 19th century
"Korea, Land of the Diamond Mountains" at Newark Museum (2014-2015)
Artsy:
U-Ram Choe
’s Gold Cakra Lamp (2013) is also hanging in the Korean galleries. What was your thought process for making this curatorial decision of juxtaposing the traditional and contemporary side by side?
KP: I think that contemporary art is sometimes more accessible to the contemporary audience because it’s of the period that we live in now. In addition, I believe that all art is based on personal experience, and so all art relates to one’s own background, and one’s culture or cultures. Throughout all of the Asian galleries, as well as our galleries for African art, decorative arts, and American art, we make a point to show contemporary art as well as traditional art.
In some institutions it is a common belief that to not show contemporary Asian art is to imply in a Western context that there is no contemporary Asian art, which is clearly not the case. So it’s important to show contemporary, not only in global contemporary galleries where they speak with other global contemporary artists, but also in galleries that are specific to regions, so that you can see how a particular artwork relates to the region of origin. 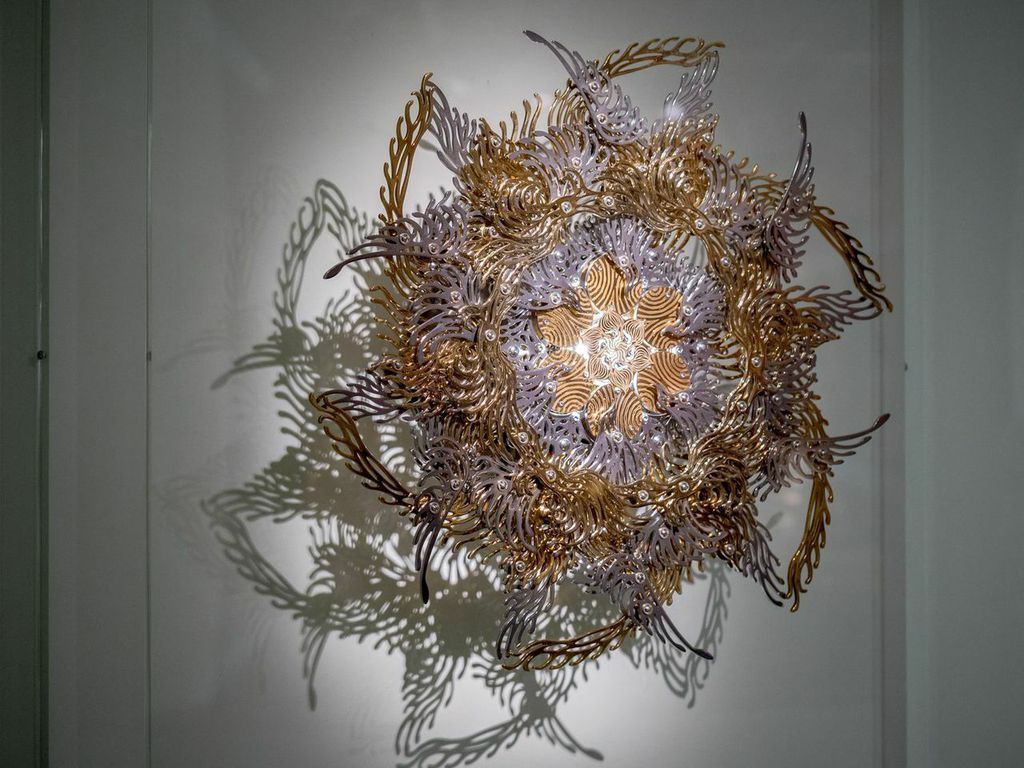 Artsy: What are your next projects?
KP: My next project will be the Islamic art exhibition I’m co-curating, planned for early 2016, which will uncover hidden gems of our collection that reveal the huge diversity of Islam. It will absolutely include contemporary art. We are consistent about wanting to feature the arts of today and have always done so.
Part of the joy of this Islamic show will be presenting how Islam really is a global religion; it is not located only around the Middle East. The largest population is in Indonesia. There are huge populations in South Asia, such as parts of the Philippines, as well as in West Africa, which are never really featured in Islamic art shows. We have some wonderful works from Nigeria and Mali, which are important countries that have strong Islamic art traditions. We’re also looking at the diaspora—people who practice Islam who live all over the world—in Europe, in the Americas, and in other parts of Asia.
Artsy: Asia Week brings an international audience that is very familiar with Asian art collections here in New York as well as around the world. Could you name some of your favorite art collections or historical sites in Asia?
KP: I’m very lucky to have visited many amazing sites and collections. I would say that Bulguksa and Seokguram in Korea are highlights, as well as Hangzhou in China with its famous West Lake. I adore Kathmandu. The first site I was trying to get to in Asia was the former kingdom or the current kingdom of Bhutan, now a democratic government, and the inspiration for my doctoral work. Bagan in Myanmar is also one of my favorites.
—Janet Yoon
Learn more about Asia Week New York 2015.
Related Stories