Hank Willis Thomas on Race, the Media, and His Upcoming Armory Show Takeover 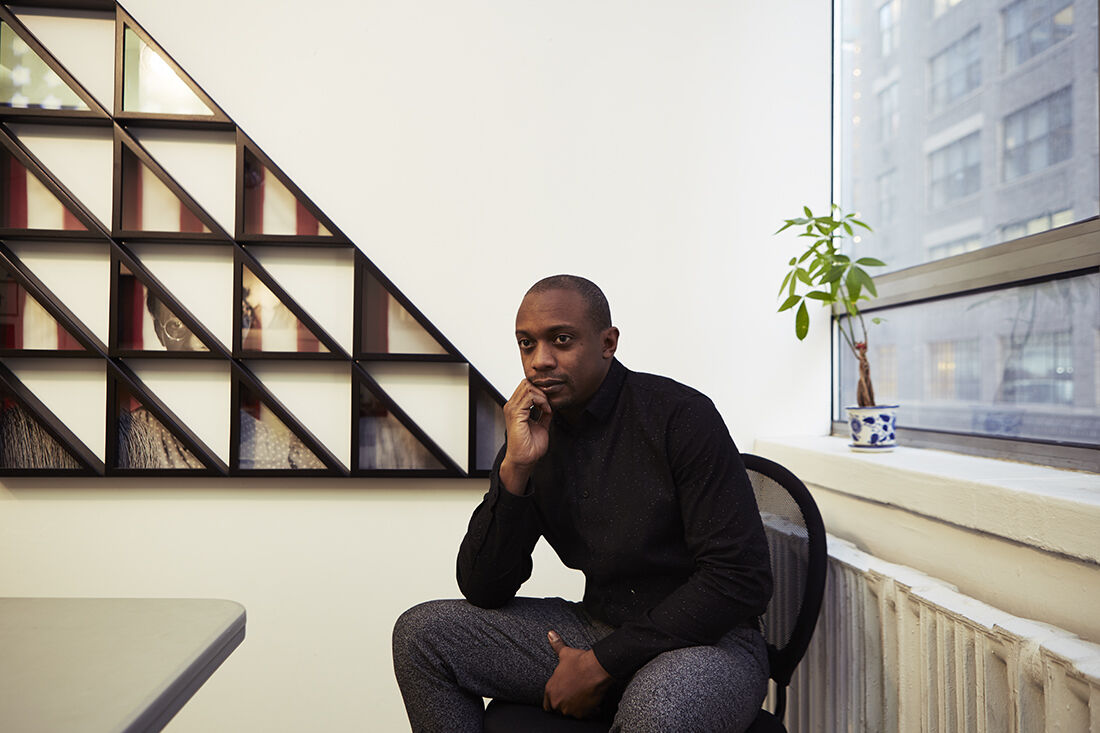 “I came to photography through genetics—through osmosis, maybe,” says Hank Willis Thomas, sitting at a long, plastic table in the center of his midtown Manhattan studio. “My mother always had pictures of strangers around the house, and all the pictures had stories behind them. Soon I realized that the stories that are told about the people in pictures really determine the way we understand history, and the world.” 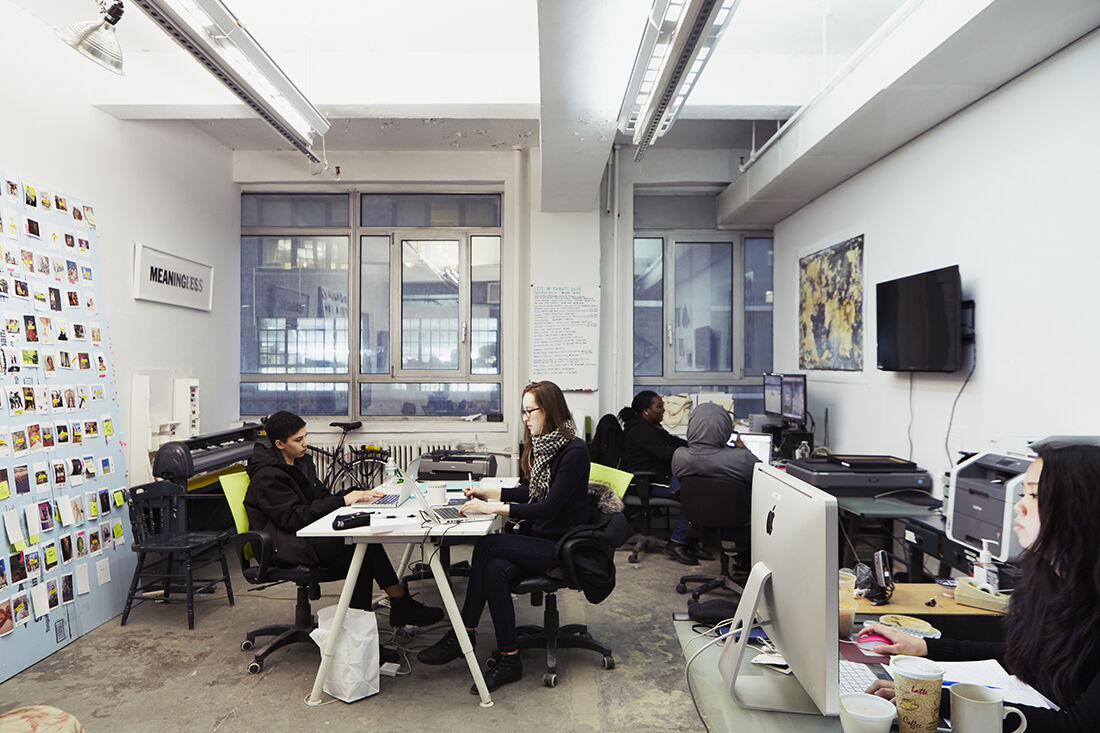 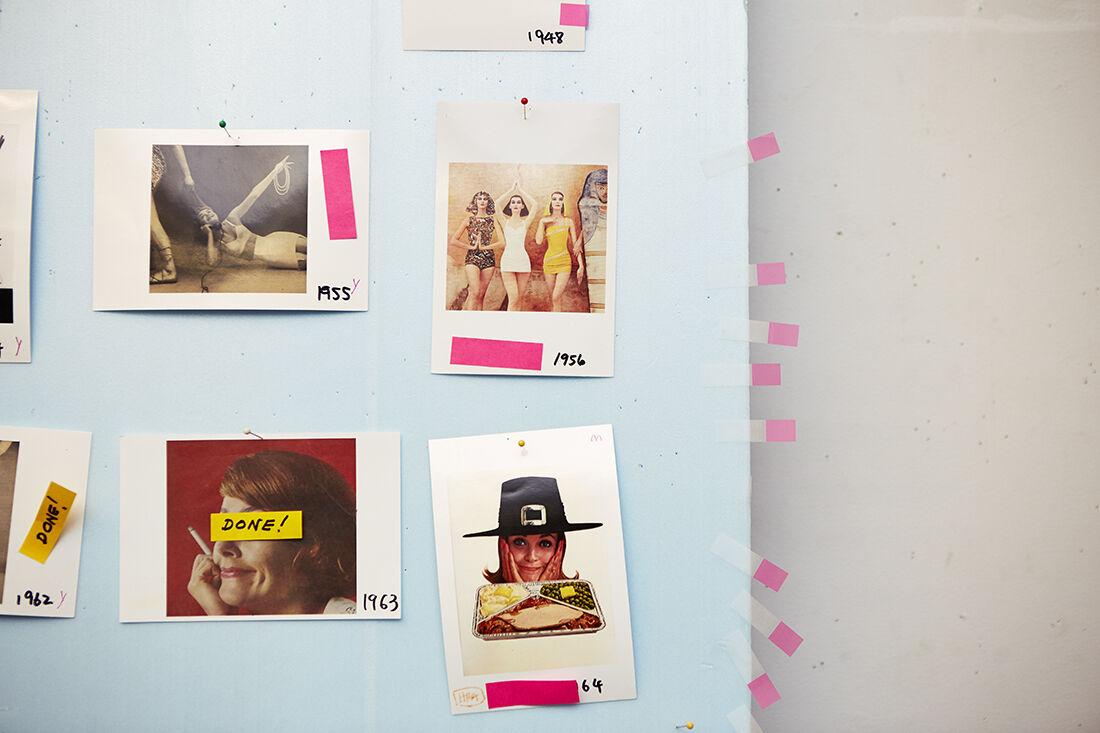 Born in Plainfield, New Jersey, in 1976, Thomas has spent the past two decades plumbing the issues introduced to him—indirectly—by his mother, renowned photo-historian and curator Deborah Willis. But while her work challenges the canonized history of the medium, giving voice to the generations of African-American photographers working since 1839 without adequate recognition, Thomas uses photography as a means to explore more self-reflexive concerns, particularly how contemporary identity continues to be shaped by social and commercial structures. He shares with his mother an interest in demonstrating the limitations of what we presume to exist by showing us what we have not seen: revelation by way of absence. 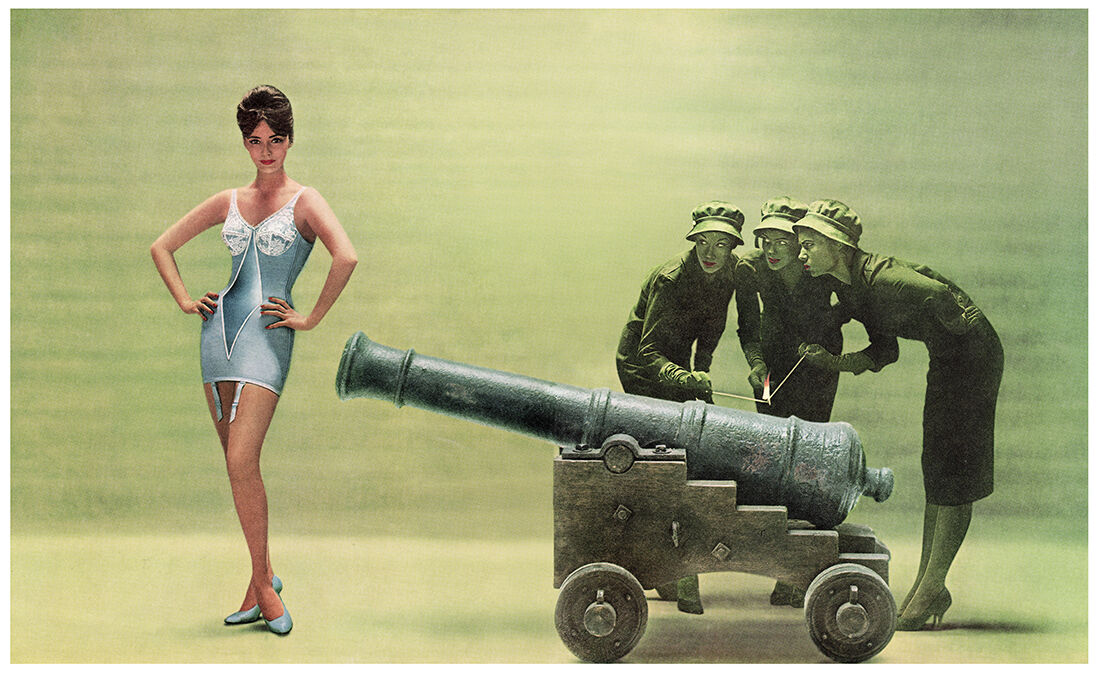 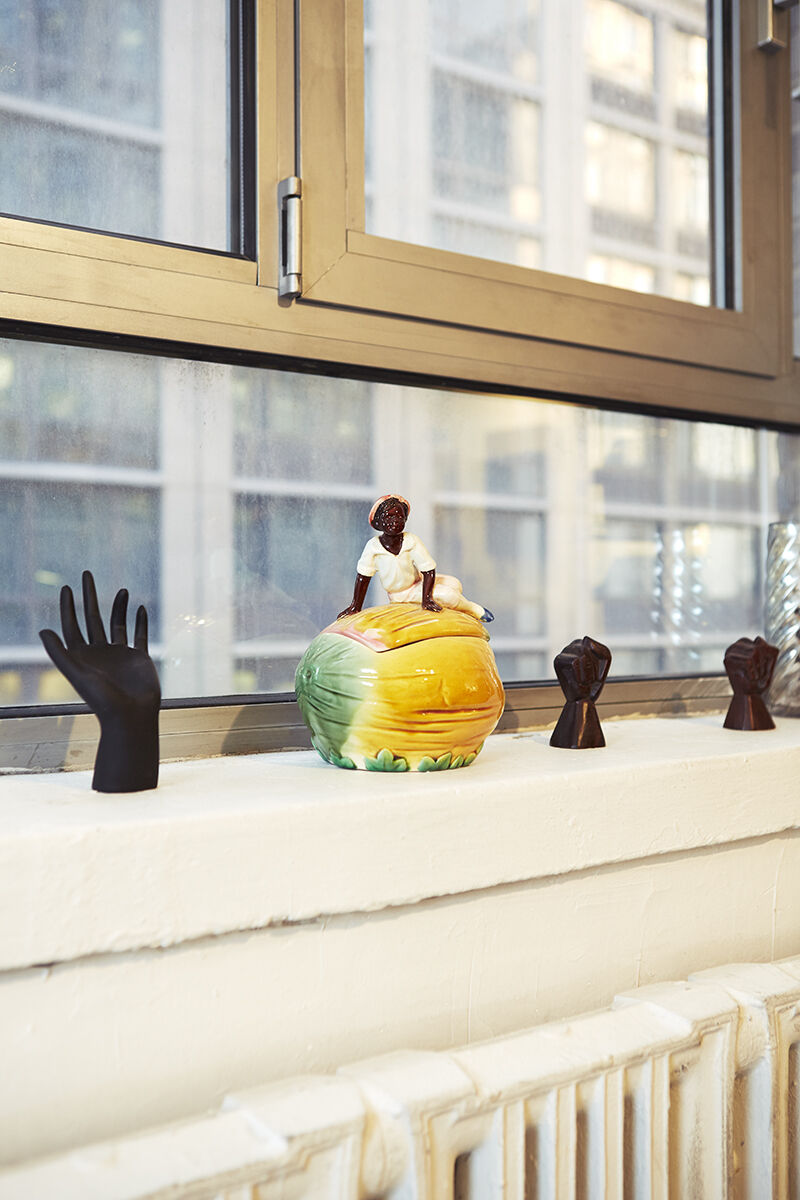 “I think I approach photography [and advertising] with that same kind of skepticism about what’s really the story here, what’s really for sale?” he reflects, gazing into the late afternoon gray. The window sills of the small, spare room—dusty concrete floors, white walls, an enormous printer stashed in a corner—are lined carefully with a few objects: a money tree, lent him by a friend; a black figurine of a woman’s slender hand; a painted porcelain box. 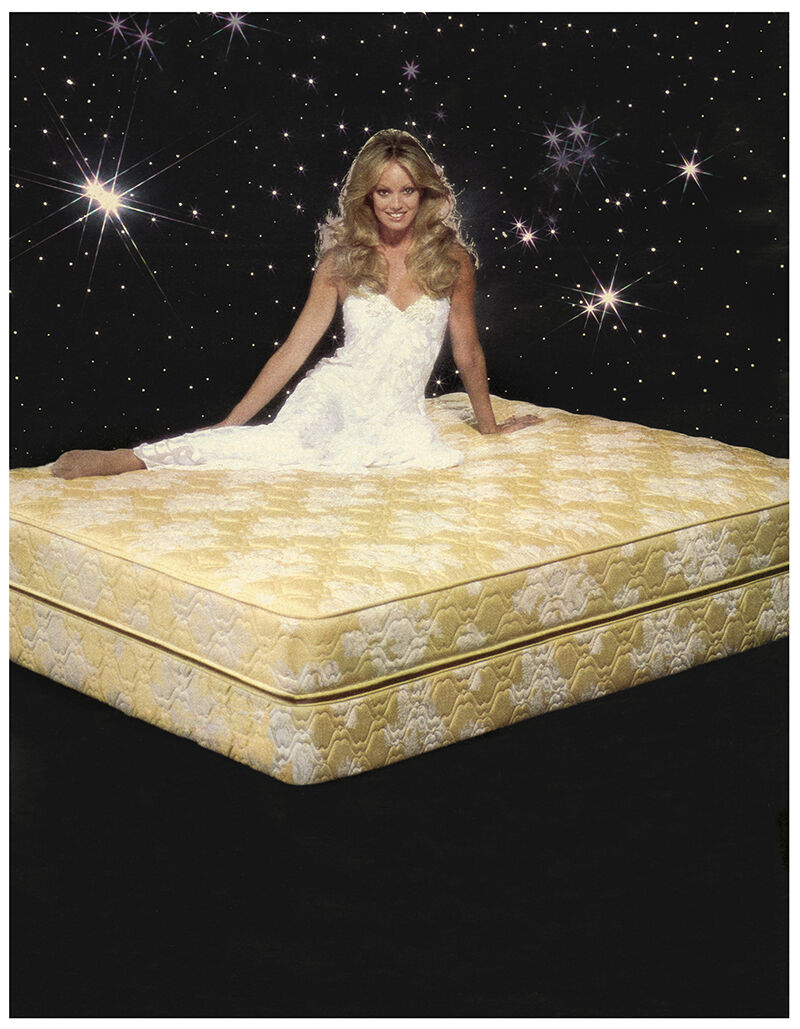 “I’m interested in finding new ways of revealing things that are kind of latent in a given image,” he adds. “I talk about my work as an archaeology in a sense, and I might consider myself a photographic archaeologist, or a visual culture archaeologist. I believe that all the content in my work is really about framing and context, is about calling the viewer to think about how their position affects what they see.”
Since graduating from the California College of the Arts in 2004 with master’s degrees in both photography and visual criticism (he received his B.F.A. in photography and Africana studies from NYU), he has forged a unique visual style that incorporates various mediums but is usually anchored by a modified or manipulated photographic image. 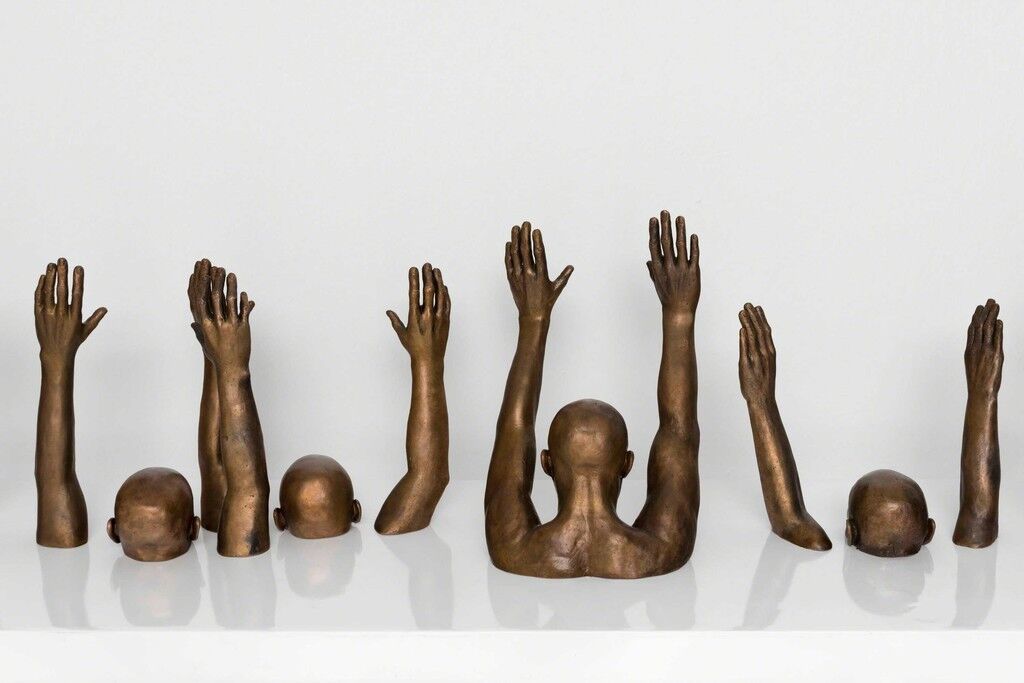 Hank Willis Thomas
Raise Up, 2014
Goodman Gallery
A recent series of sculptures, for example, features graphically stunning arrangements of disembodied hands and arms, extending into space in strange and dynamic contortions. Originally derived from historical photos—but represented here without contextual information—the activities they appear to perform feel both loaded and ambiguous. The Lives of Others (2014) depicts two cast-resin arms with locked hands, one surging up from a white pedestal to meet the other, which reaches down from above, and was inspired by an image from the fall of the Berlin Wall. In Raise up (2014), a suite of bald bronze men emerges from a flat, white base, but only their heads and upraised arms are visible. Is this an execution line? A Pentecostal ordinance? A protest? Throughout the series, Thomas’s appendages enact a sort of visual synecdoche, in which the part is substituted semantically for the whole: hands and arms that are not attached to people symbolize anonymity, writ large, encouraging viewers both to project their own interpretation onto the image, and to be aware that they are doing so. 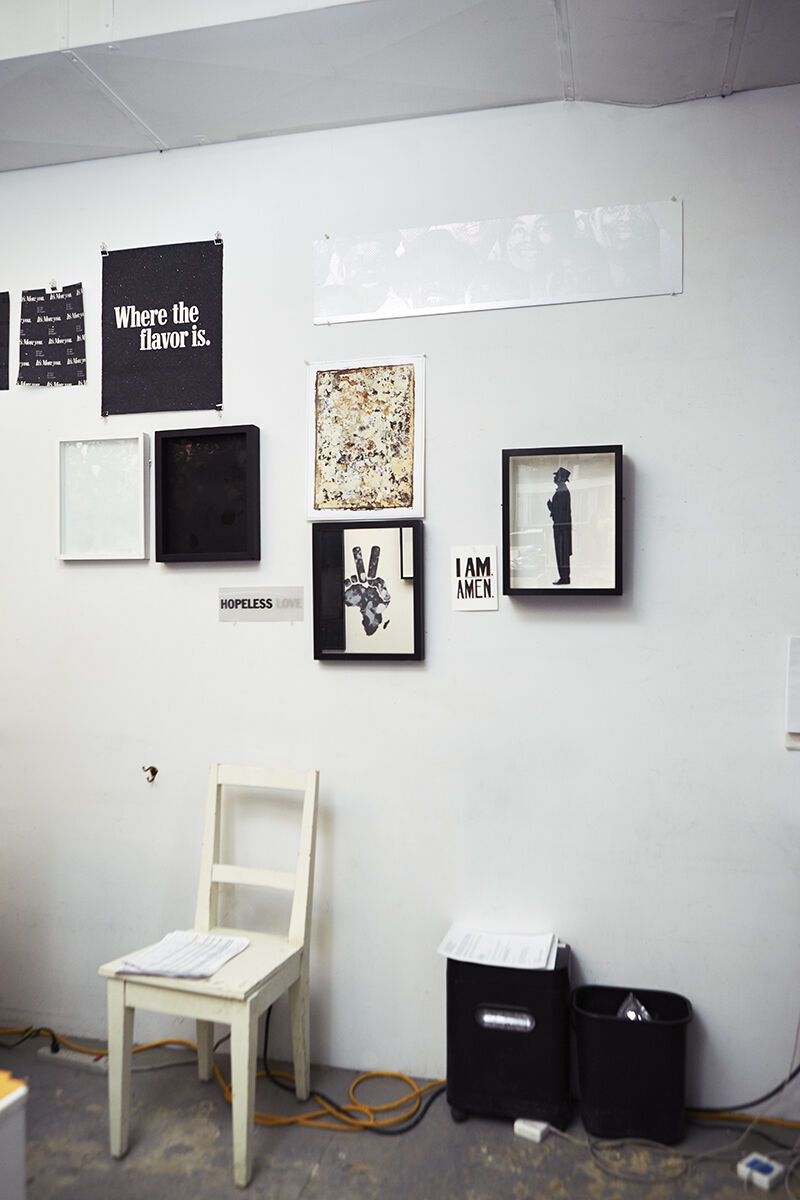 Indeed, much of Thomas’s production is focused on encouraging such self-consciousness in the viewer. His holograms and “lenticulars”—printed with a UV flatbed printer to morph when seen from different angles—quite literally reflect their context. In Black Imitates White, a lenticular from 2012, a large black surface in a frame reads either “Black Imitates White” or “White Imitates Black,” depending on a viewer’s position; as he or she moves, the words flash in and out of legibility and switch back and forth, occasionally blurring together entirely. Other works operate similarly, taking concepts that are semantically opposed and confounding them: a clever demonstration that meaning, based on what you see, is always determined by where you’re standing. 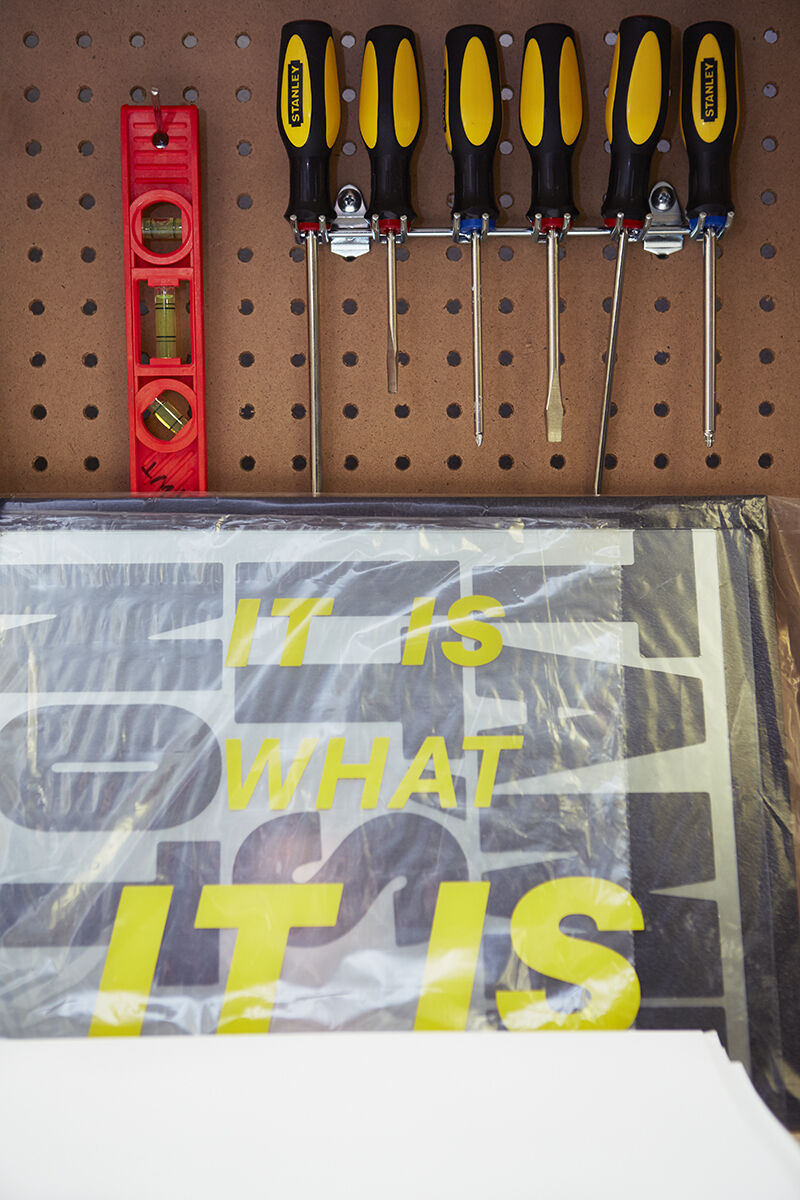 So, too, with the “Wayfarer” suite of photographs of Sanford Biggers—displayed on the outside walls of the International Center of Photography in 2013—which depicts the fellow artist dressed in a tophat and tails, one half of him painted white, the other black. “This is the same metaphor, really, that people see you differently depending on what side of you they’re standing on,” Thomas says. “But it also references the cultural hybridity that exists in all of us. And when we try to put someone in a group, we probably are ignoring as much about them as we are defining; in fact, we’re probably ignoring more than we are defining. And where does that give us space to be unique individuals?”
That tension between individual and collective influences in the construction of identity is at the root of his “Unbranded” series (2005-08) of modified commercial advertisements. The first iteration of the project, “Unbranded: Reflections in Black by Corporate America 1968-2008,” features a tightly curated selection of advertisements marketed toward a black audience—two from every year—stripped of all advertising information, so the images speak solely as visual propaganda.
“When I think about pop culture and advertising, the people who ultimately make the decisions about any group they’re marketing to usually aren’t a part of that group. But I think we learn a lot about who we are based on from the images that are marketed to us,” Thomas says. “They actually teach us how we’re supposed to behave, what’s okay, what’s not okay.” Debuting at Jack Shainman Gallery in April is his next version of the project, “Unbranded: A Century of White Women, 1915–2015,” which conducts a similarly anthropological dissection of female “whiteness.” 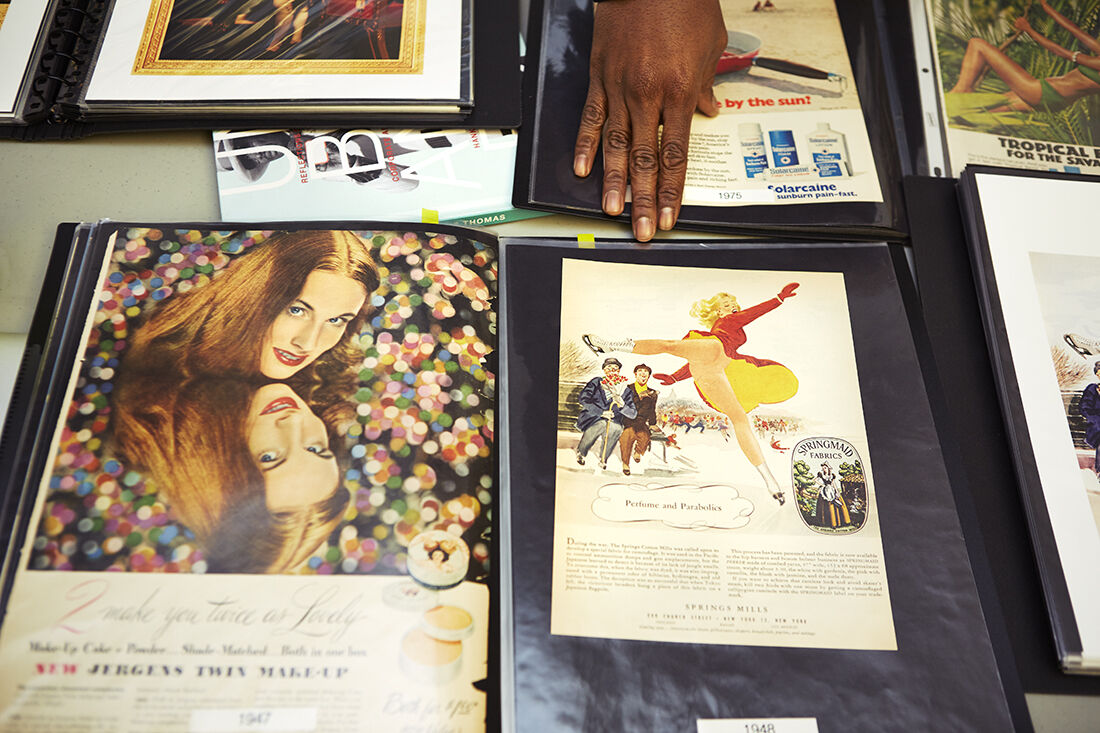 “Whiteness is the end-all-be-all of fabrications, the blob of anonymous opportunity,” the artist explains. “And ‘white’ women have been seen as the precious jewels of society and culture, but they didn’t even have the right to vote a century ago—while even African-American men technically did. As we might be seeing a European-descended female elected as President, I want to examine what’s happened in the course of the past 100 years, using ads to understand what our society’s hopes, dreams, and values have been.” 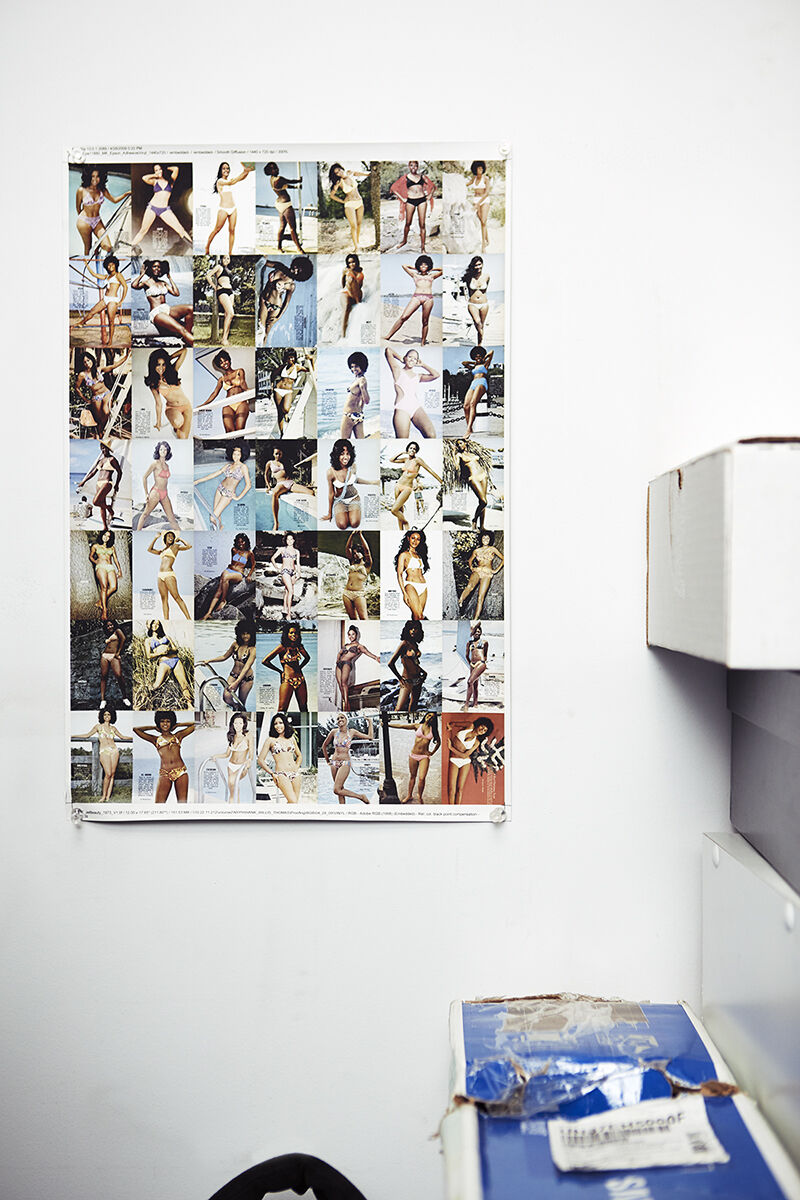 A test print for “Speaking of People: Ebony, Jet and Contemporary Art,” currently on view at the Studio Museum in Harlem. Photo by Alex John Beck for Artsy.

With their rambling blocks of explanatory copy removed, the images are stunningly opaque. Compositions are often illegible, the product for sale uncertain, yet as the years move forward we can trace developments—both progressive and regressive—in the way white women are conceived and represented. “It’s not just looking at sexism,” Thomas says, “but that just happens to be there throughout most of it. And in the 1920s and ’30s the ad execs start to really get it—that you don’t need to sell the product; you just need to sell the feeling.” Thus in 1920—the year women in the U.S. got the right to vote—a blonde is depicted behind the wheel of a car, the driver of her own future, even though there is no direct correlation between the image and the product, a brand of car upholstery. In subsequent years, hair gets shorter, representing women’s newfound self-determination, and in the ’50s and ’60s, indentured servitude to the kitchen is represented by straightjackets and shackles, even in ads for a new juicer or a special paring knife. 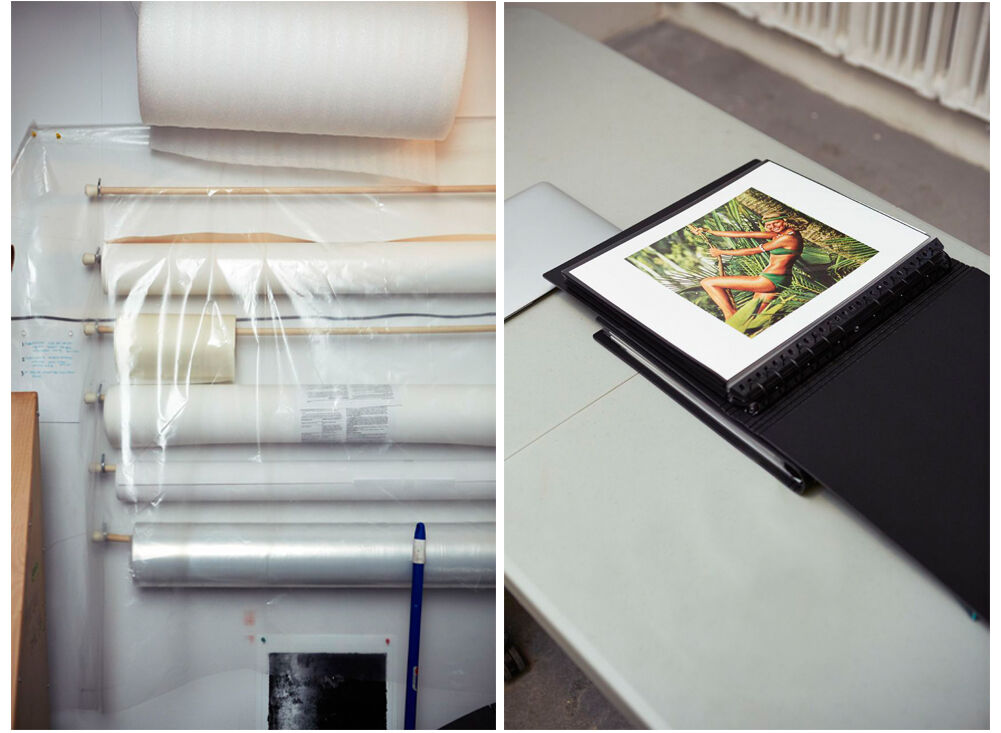 “I always try to make the point to say that it’s not about ‘black’ men, ‘black’ women or ‘white’ women; it’s about people,” Thomas says. “What happens when people are put in groups, how do they relate to the particular perceptions of the group and other people within the group, and how do they find their own agency within that context? And that’s a human experience.”
The “Unbranded” series also represents Thomas’s ongoing interest in the ways that corporate and commercial structures have learned to speak to the masses, using what he describes as “the most ubiquitous language in the world.” Premiering at the Armory Show in March, his commissioned design for the Artsy booth is anchored by the truism “Art imitates life. Life imitates ads. Ads imitate art,” screen-printed all over on retro-reflective wallpaper. The text is initially hard to see, appearing as white on white, and it only registers vividly when photographed with the flash of a cell phone—though instructions will not be offered. 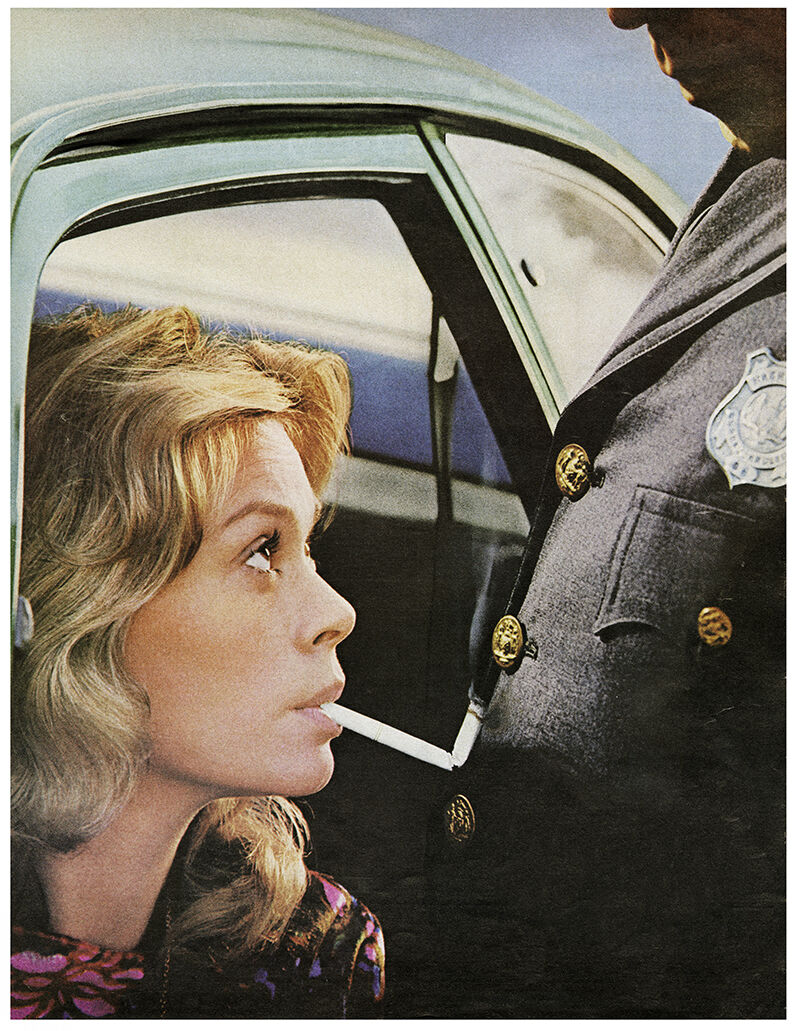 Hank Willis Thomas, I was trying to be sophisticated and then this happened, 1970/2015. Courtesy of the artist and Jack Shainman Gallery, New York.

“You can call my work a call to action, or you can call it an indictment—or even a challenge,” Thomas says. “I sometimes succeed, and I sometimes don’t give people enough information to actually know how to activate it. And so, for instance, with the flash piece for the Artsy booth, there is that question of whether people will even know it’s there. And I really hope they will. But at the same time, I think that sometimes work is there for the people who take the time.”
Visit Artsy at The Armory Show, Mar. 5–8, 2015.
Explore the Armory Show 2015 on Artsy.
Follow the Takeover on Instagram by searching #ArtsyTakeover.
Emily Nathan
Related Stories 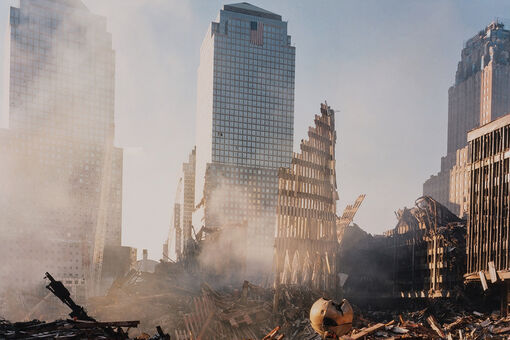 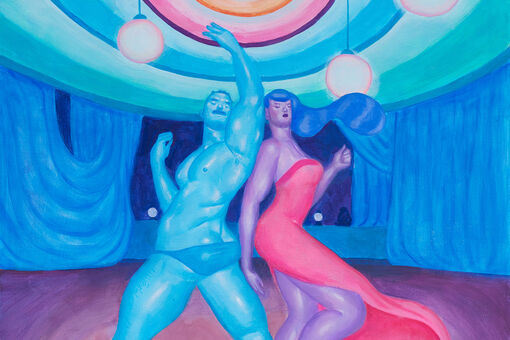 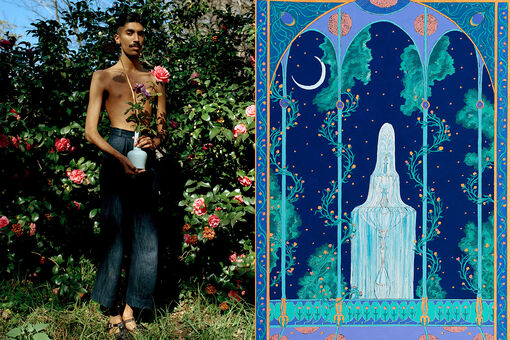 10 Gen Z Artists around the World Offer a Look inside Their Art Practices
Cornelia Smith
Aug 23, 2021