How an Artist Questions the Systems and Conditions of Urban Life 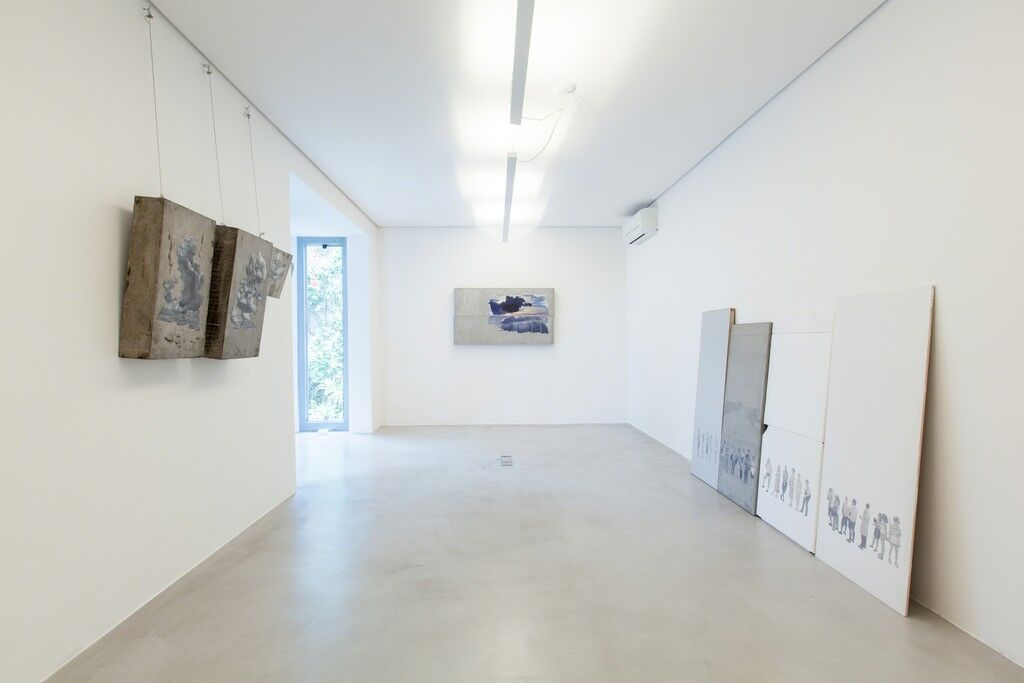 Mesquita uses a variety of media to address a given subject. Originally trained in animation and video, he has since moved to sculpture and painting. In addition to these, his current solo exhibition, “Traços de Impermanência (Traces of Impermanence),” also includes
site-specific
performance, examining in particular the bureaucratic and phenomenon of queuing —waiting in line to use services, buy goods, or sell one’s own labor. 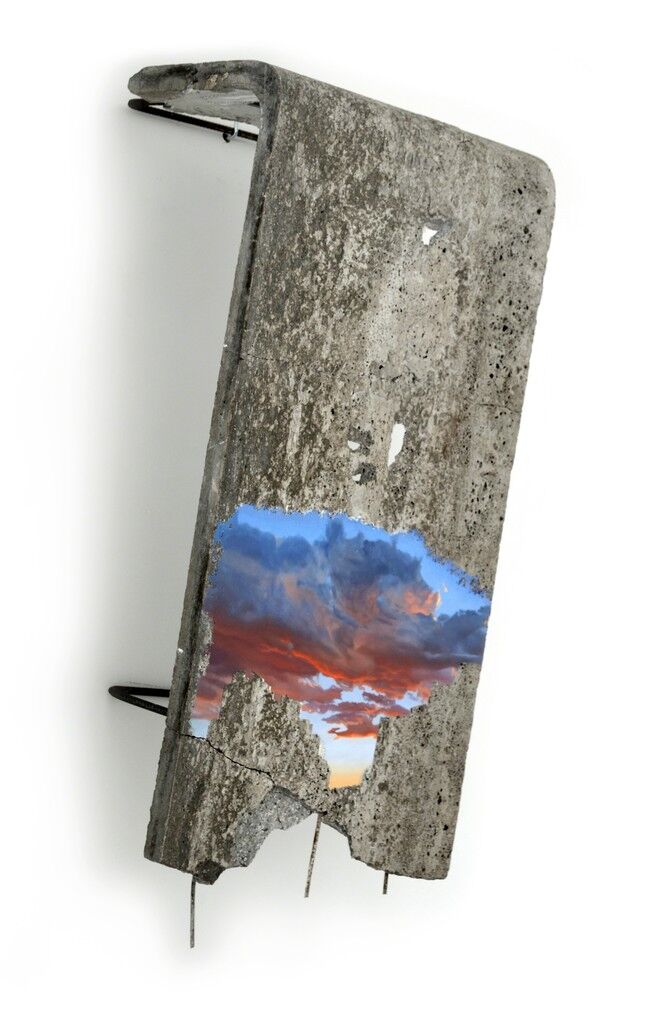 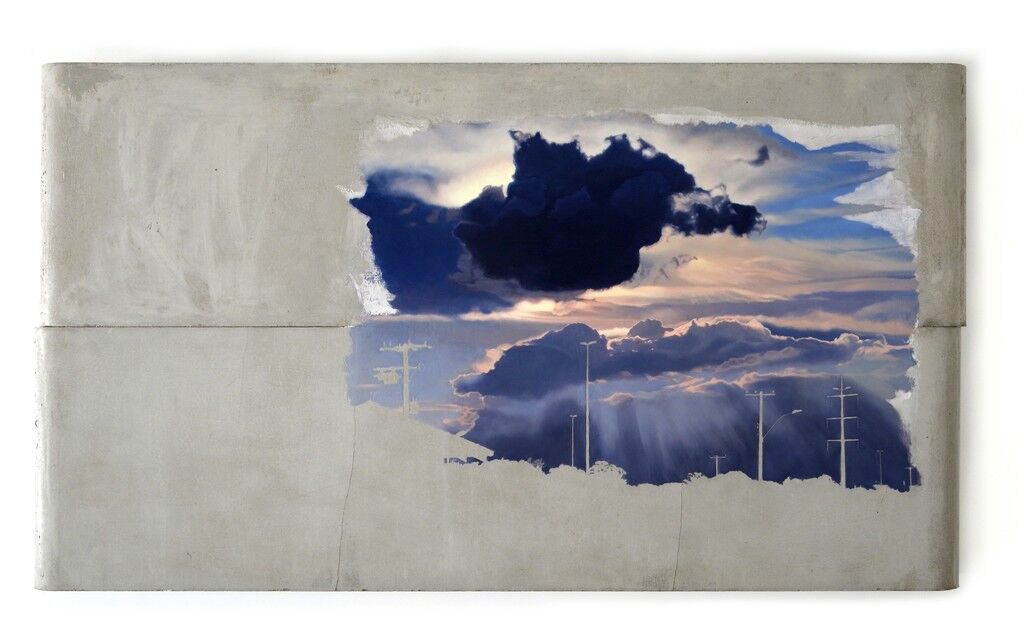 Matias Mesquita
Corpo Sólido [Solid Body], 2014
Zipper Galeria
Mesquita thinks especially about
urban life
and labor, signaled by his use of industrial materials such as cement, grease, plaster, and drywall, along with traditional oil paint, and unusual paints, such as nail polish. On large slabs of cement, which recall the work of
Letha Wilson
, Mesquita paints people and cloudy skies, editing out the urban landscape, which is hinted at in silhouette. “Extinguished of full meaning,” says the artist, “they become tombs of permanence, in a dystopia of illusion.” In Imanência [Imanence] (2014), a tall, curving cement slab projects from the wall. The bottom third is painted with a beautiful cloudy sunset in blues, reds, yellows, and grays. The sky’s horizon has been redacted, represented only as a jagged edge. Similarly, in Corpo Sólido (Solid Body) (2014), the sky is punctured by thin blank spaces: unpainted telephone poles and streetlights, hinted at only through negative space. 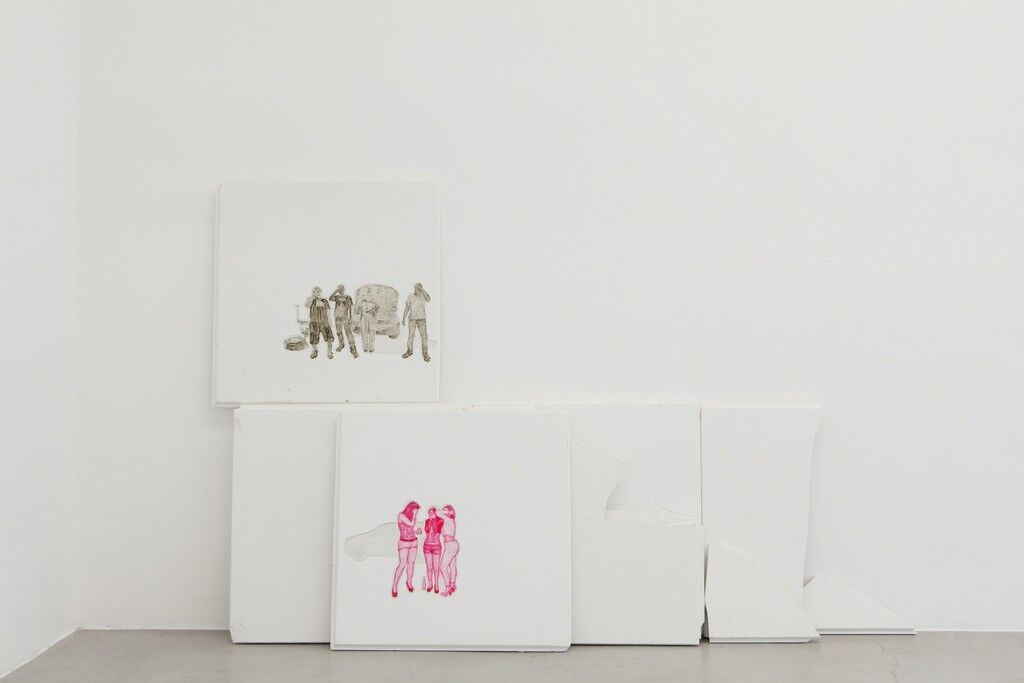 Matias Mesquita
SCLRN 706 Alley, 12h57 - 23h18 , 2014
Zipper Galeria
Advertisement
His works are  presented unconventionally, with paintings leaning against the wall like casual sculptures or building materials in waiting. SCLRN 706 Alley, 12h57 - 23h18 (2014) is comprised of several plaster slabs, one of which is emblazoned with a painting of young women, who appear to be shielding themselves from the catcalls of men, depicted on another slab stacked above. The collage-like interaction of both groups across the picture planes mimics the fractured experiences of city life. 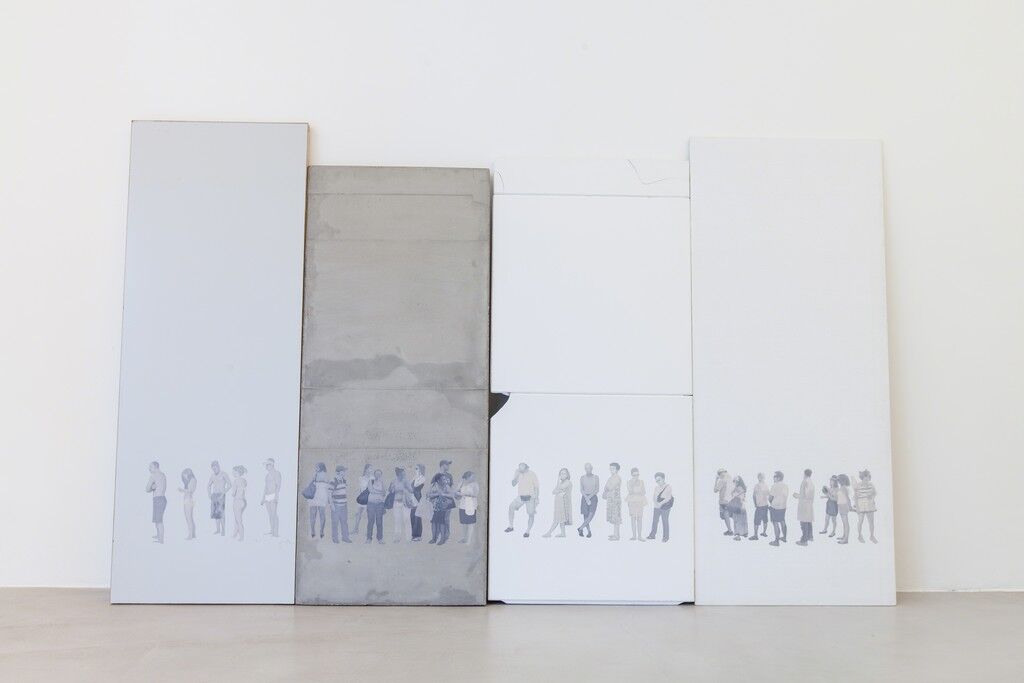 Matias Mesquita
Fila Única [Single File], 2014
Zipper Galeria
Finally, Mesquita uses the image of the queue to explore the way urban systems direct and control the experience of people within it. In Fila Única (Single File) (2014), people are lined up in a loose single file—mingling, making calls, being bored—across four panels of wood, plaster, cement, and drywall. Painted in a bluish grisaille, these figures displace the city, which is represented only by the work’s materials. Mesquita effectively asks, “Where is the difference between social convention and the implicit demands of authorities?” His investigations in paint and sculpture ask us to contend with this question and to interrogate how  city environments influence our choices.
—Stephen Dillon
“Matias Mesquita: Traços de Impermanência (Traces of Impermanence)” is on view at Zipper Galeria, São Paulo, Jan. 23–Feb. 21, 2015.
Follow Zipper Galeria on Artsy.
Related Stories