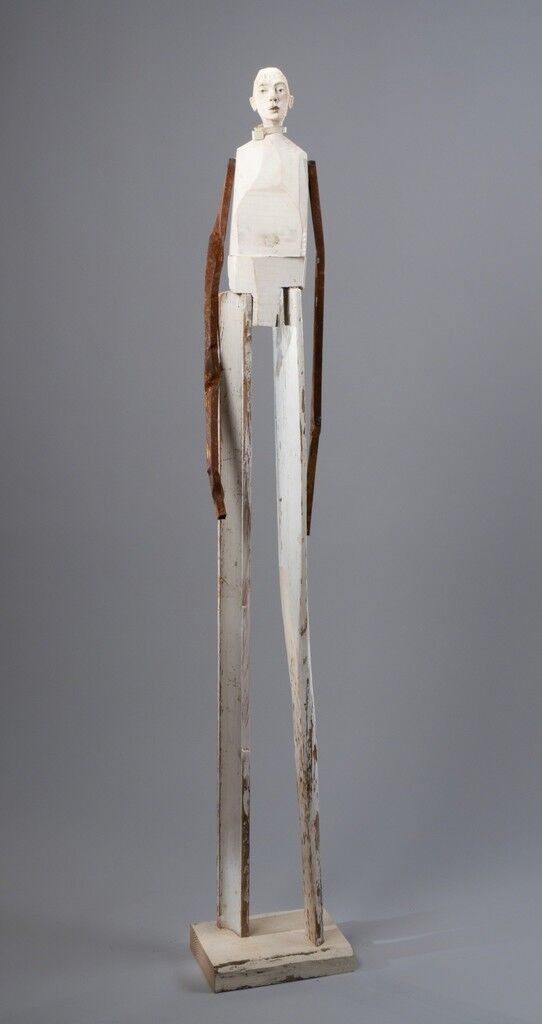 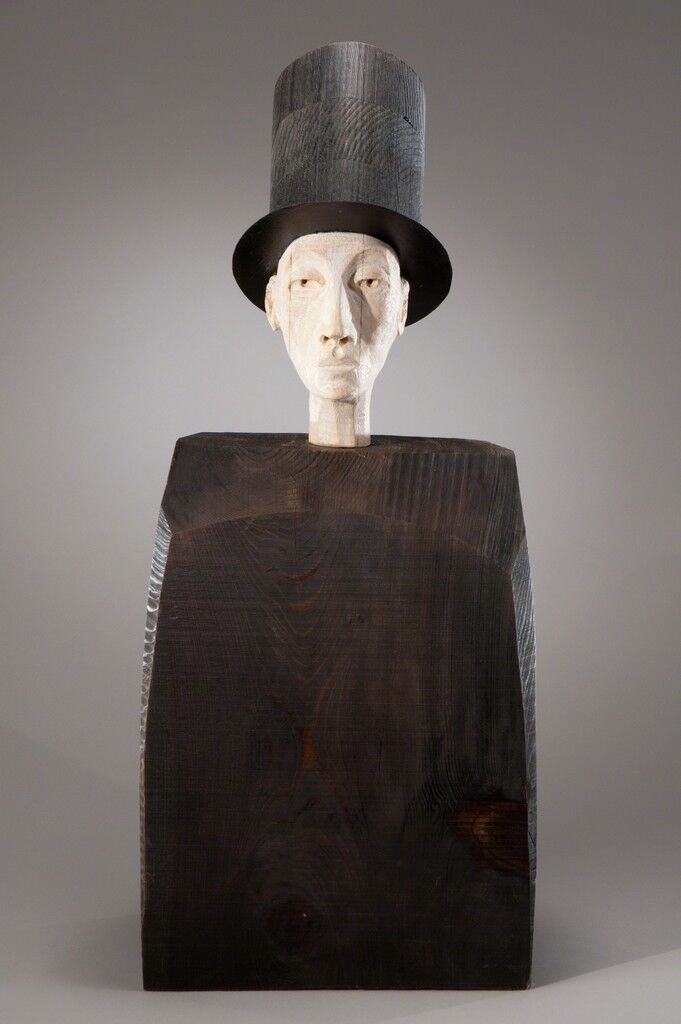 Joe Brubaker
Marco, 2014
Seager Gray Gallery
“I’m interested in making work that is meditative,” says Brubaker, “[work] that balances between the associative energy of abstraction, and the narrative power of totem and effigy images.” Each figure, whether a bust or a full body, is given a name as its title, a highly personal and personifying detail by the artist.
Brubaker’s bust portraits, featuring heads placed on top of emotive but simple bases, carry commemorative associations, despite their lively and suggestive rendering. In Marco (2014), a dour man in a top hat stares out toward the left of the viewer, aloof. The regality of his demeanor and dress in given austerity and vulnerable character by the craftsman-like stained black wood base on which he sits. 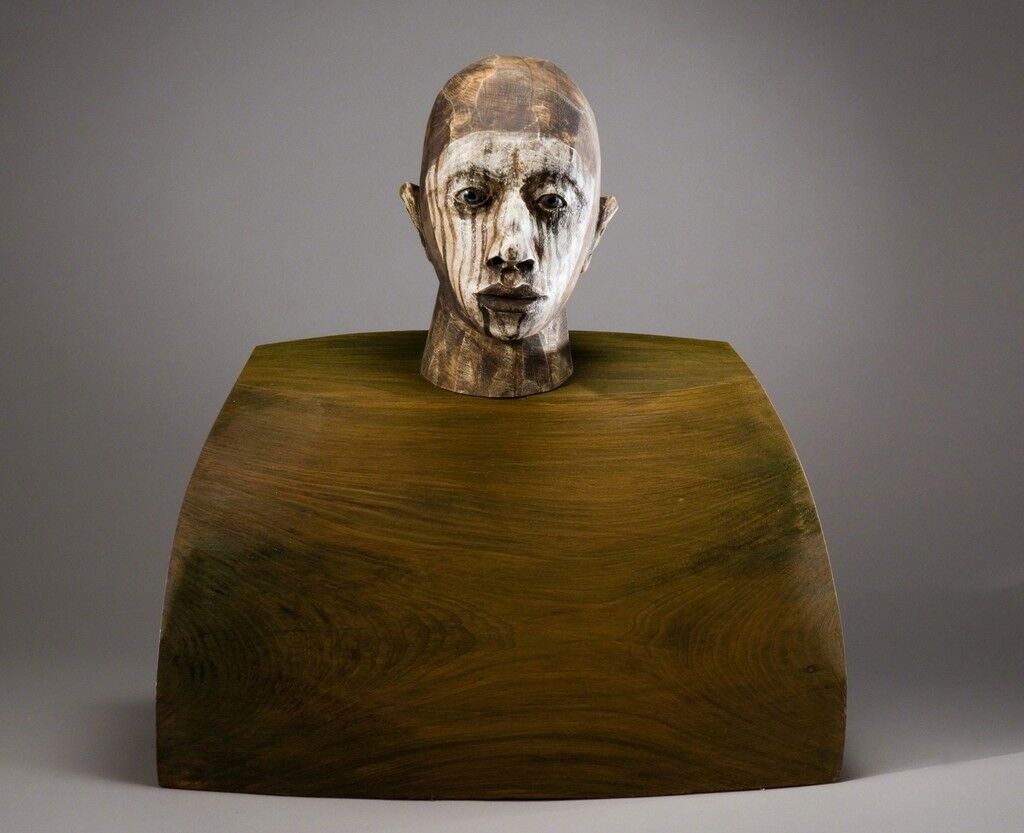 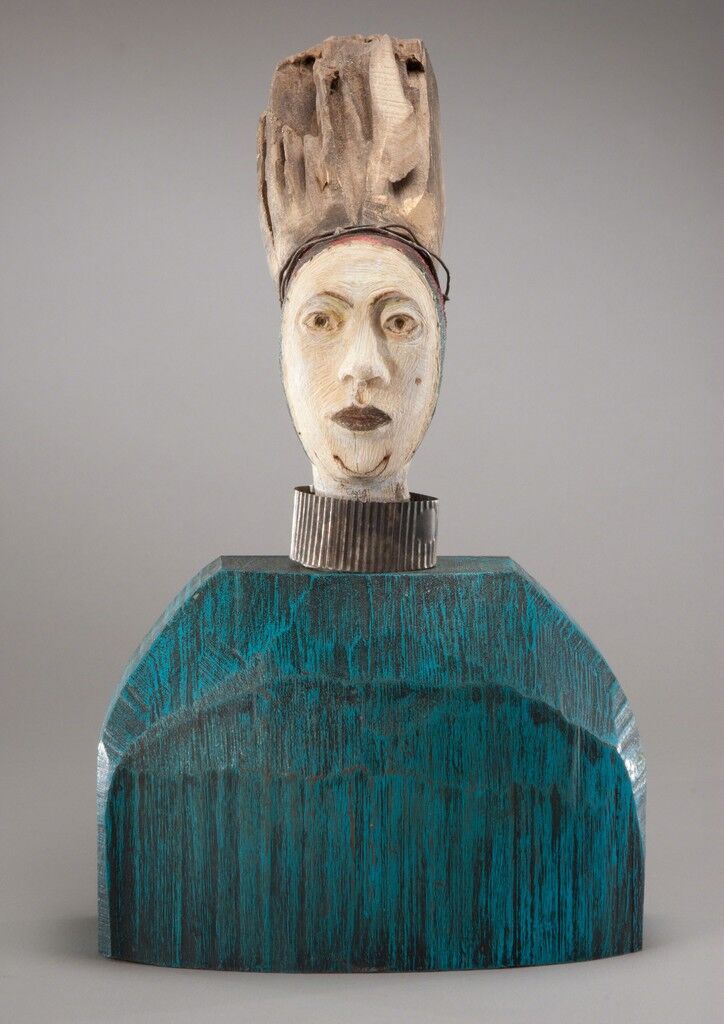 Joe Brubaker
Joan, 2014
Seager Gray Gallery
Alternatively, Joan (2014), is vibrant and determined, staring straight out before her. She wears a high collar and a strange hat, her lips painted. The sculpture’s plinth is painted in bright aqua with vibrant drips running downward. Claudio (2012) is perhaps the most primordial of this oeuvre. With the kind of quasi-
Cubist
rendering that Brubaker employs in his full-body sculptures, the carved wood in this piece is angular and formalist. The boy’s head is diminutive compared to the base, which is painted a warm olive green. 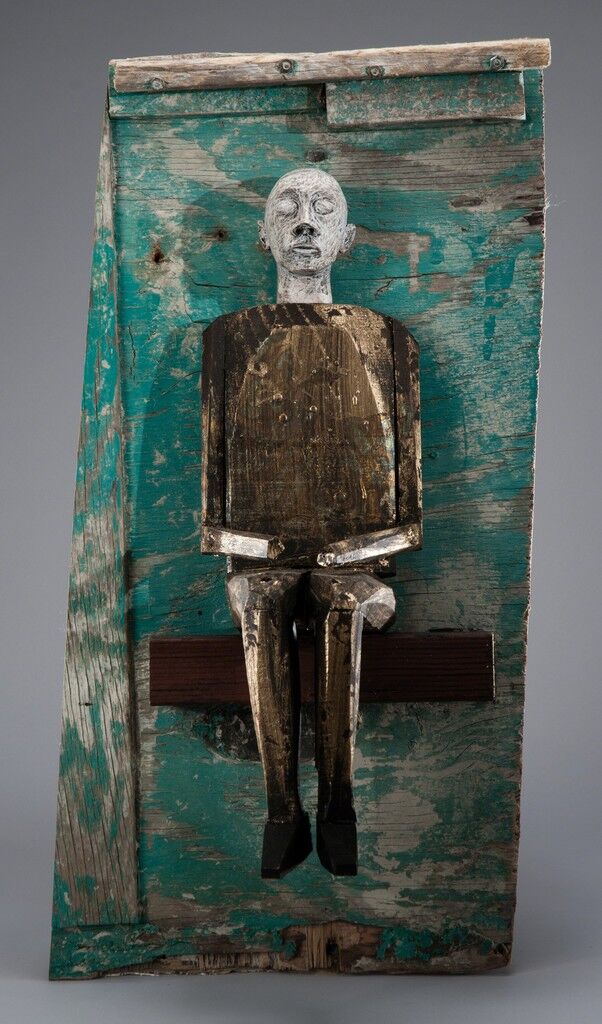 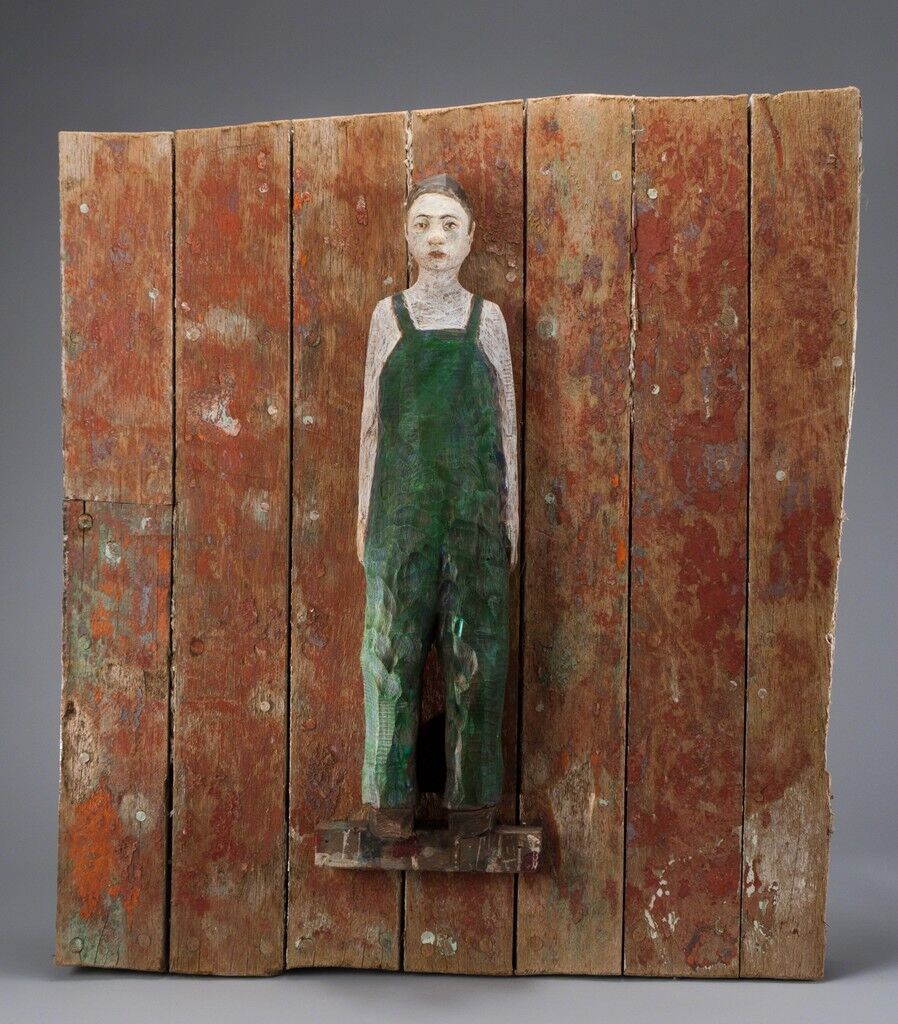 Joe Brubaker
Thomas, 2014
Seager Gray Gallery
Advertisement
“I make carvings that are clothed by the associations the viewer brings to his/her confrontations with the work. … Some of my works are populated by a revolving set of characters, who, as familiar entities to me, allow me to use them as actors on an ongoing basis,” says Brubaker. In works such as Christopher (2013) and Thomas (2014), characters are depicted in their entirety, set against walls of apparently found wood. They appear as narrative vignettes, though clipped from the arc of a life in progress. 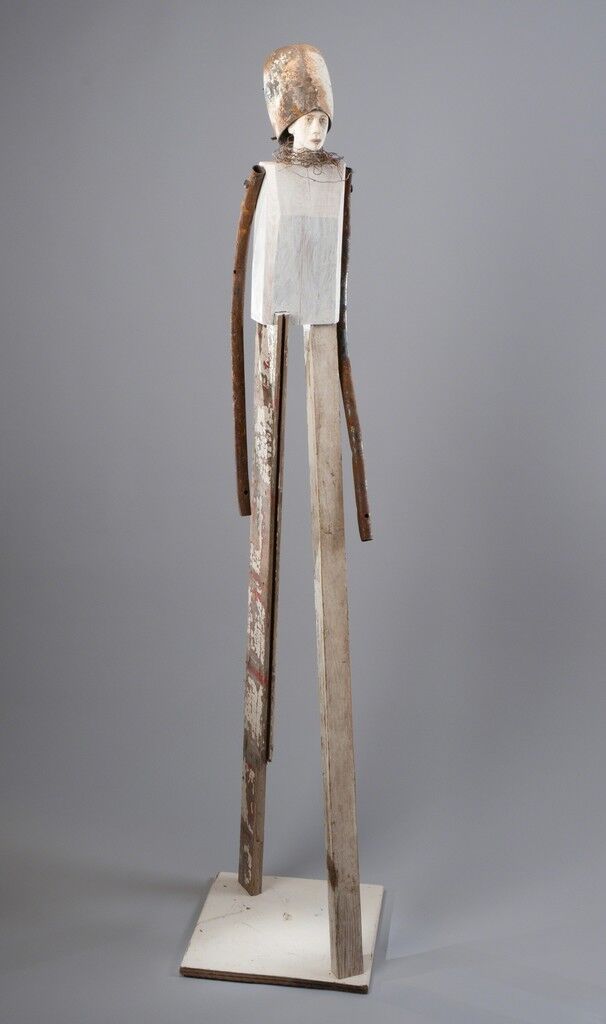 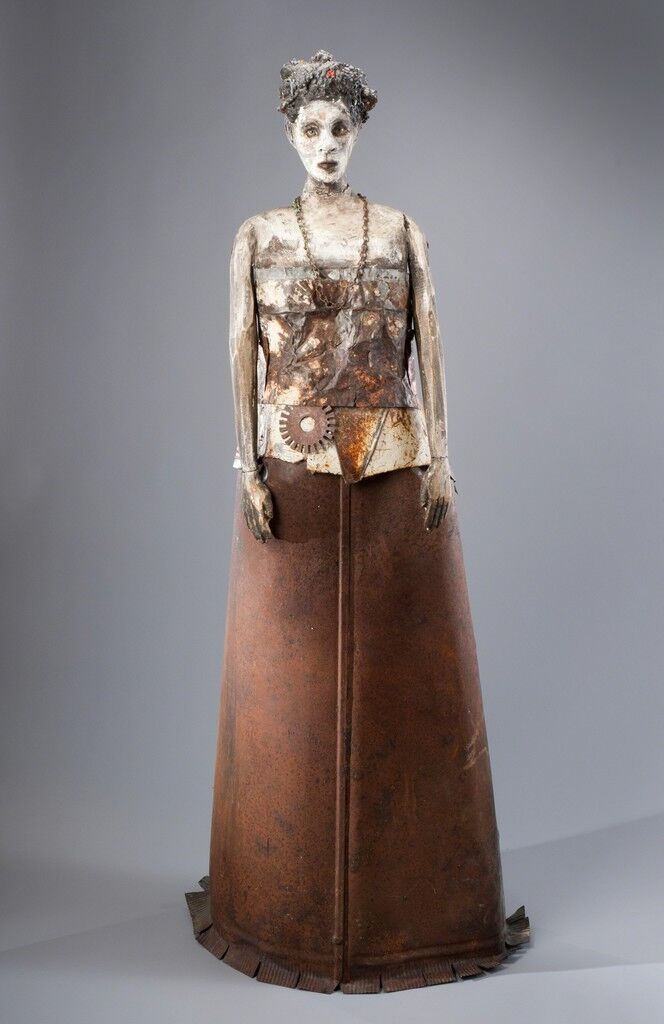 Joe Brubaker
Sigourney, 2014
Seager Gray Gallery
Brubaker’s standing figure works draw from
outsider art
and
ancient artifacts
, as well as more contemporary work. Reminiscent of imagery from Greece and Egypt, sculptures such as Cornelius and Sigourney (both 2014) use the stylized ancient pose of the figure’s arms at their sides, one foot forward, staring straight ahead. Nonetheless, Sigourney is dressed in seemingly contemporary clothing, her face painted and expressive. Cornelius, and another work, Mauricio (2014), are more abstract, their limbs elongated in a manner similar to figures by
Alberto Giacometti
. The potpourri of references and approaches to figuration by Brubaker results in work that is fundamentally realistic, but tied to ageless embodiments of humanity.
—Stephen Dillon
Discover more artists at Seager Gray Gallery.
Related Stories