Laurie Simmons
, photographer, filmmaker, wife to
Carroll Dunham
and mother to Lena and Grace Dunham, emerged in the New York art scene during the second wave of feminism, alongside Pictures Generation artists
Cindy Sherman
and
Sherrie Levine
. But while Sherman interrogated the constructs of female identity, shooting herself in the guise of an eclectic cast of characters, Simmons turned her lens on miniature dollhouse interiors, eventually populating the staged scenes with tiny figures, in images that take on a quieter, but more wistful, childlike, and emotionally charged character. For Simmons, this was the beginning of a lifelong obsession with dolls, dummies, masks, make-believe, and issues of truth and fiction. I spoke to Simmons before the opening of her new show, “How We See” at the Jewish Museum to talk women and the internet, and hear about her upcoming feature film My Art, in which the artist herself will star as a video artist (alongside her daughter, who is reportedly set to make a cameo appearance).
Tess Thackara: What first attracted you to working with dolls?
Laurie Simmons: It was kind of an accidental beginning. I was shooting black-and-white, miniature rooms, a combination of dollhouse furniture and photographic backgrounds. I got this idea that I could fool people, deceive them into believing that the rooms were real. I was kind of playing around with reality and artifice, with truth-telling and lying. And I was going to junk shops and yard sales where I could find boxes of miniature furniture that often included dolls. Every time I bought a batch of furniture, I would throw the dolls into a pile in the corner of my studio. And I can’t tell you why or how, but one day I just picked one up and put it in a photograph. 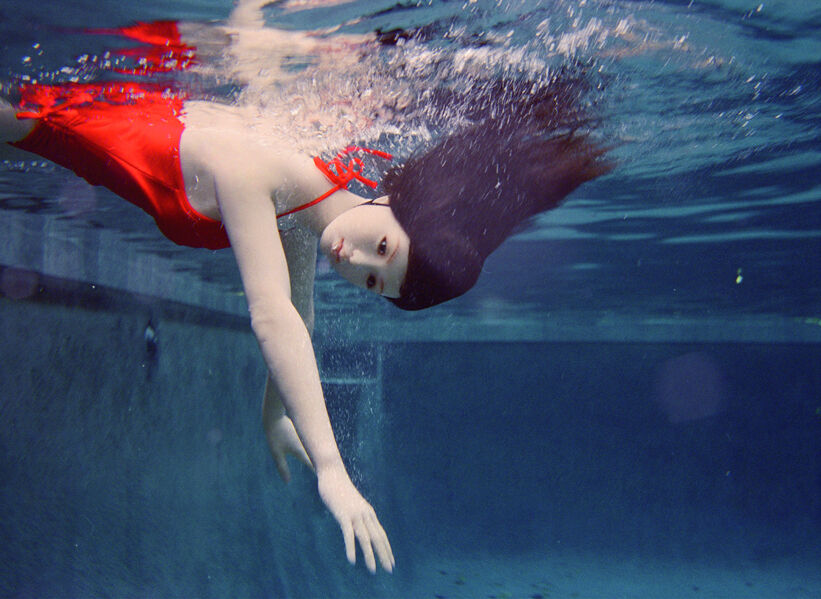 Laurie Simmons
The Love Doll / Day 24 (Diving), 2010
Salon 94
TT:  You later moved on to photographing staged scenes with life-size “love dolls,” which have this incredible interiority to them. The expressions on their faces look really sad to me, which in some ways makes them more palatable than looking, for instance, at a vacant, smiling model in a magazine. Is there something about the style of the dolls that you worked with in this series that drew you to them?
LS: Well that was decades later. I think what drew me to them most specifically was their size, life-size, because it opened up this whole new world where I could shoot in human scale. So finding a life-size doll that was so beautifully sculpted and articulated was really phenomenal for me. They do make love dolls in the United States, but they’re kind of tawdry-looking; the ones I found in Japan have a gentle, more anime look to them.
TT:  Both the “love doll” and “kigurumi” series strike me as very familiar and timely, as do your older series. I’m thinking of our digital lives and the streams of perfectly posed images we see on social media accounts, particularly of women but of men, too. How does the cultural landscape for women feel different to you now, a few decades on from the Pictures Generation?
LS: I grew up in a suburb in post-World War II America. Most of the kids that I grew up with were  from first- or second-generation American families trying to embrace the American dream. Appearance was everything. So everyone aspired to look as close to perfect as possible. There was pressure to physically conform; you know, if your nose wasn’t appropriately turned up, you were meant to fix it, you were meant to diet, to have braces on your teeth. Everyone was heading towards this uniform idea of American beauty, with an eye towards assimilation and acceptance across the board.
I’d always assumed it would never be that tough for a young woman again. But I think it may actually be worse now. This is a huge subject for everyone, and for me right at the moment. I’m thinking not only about what social media and the digital age are doing to people, their sense of themselves physically, but also emotionally. 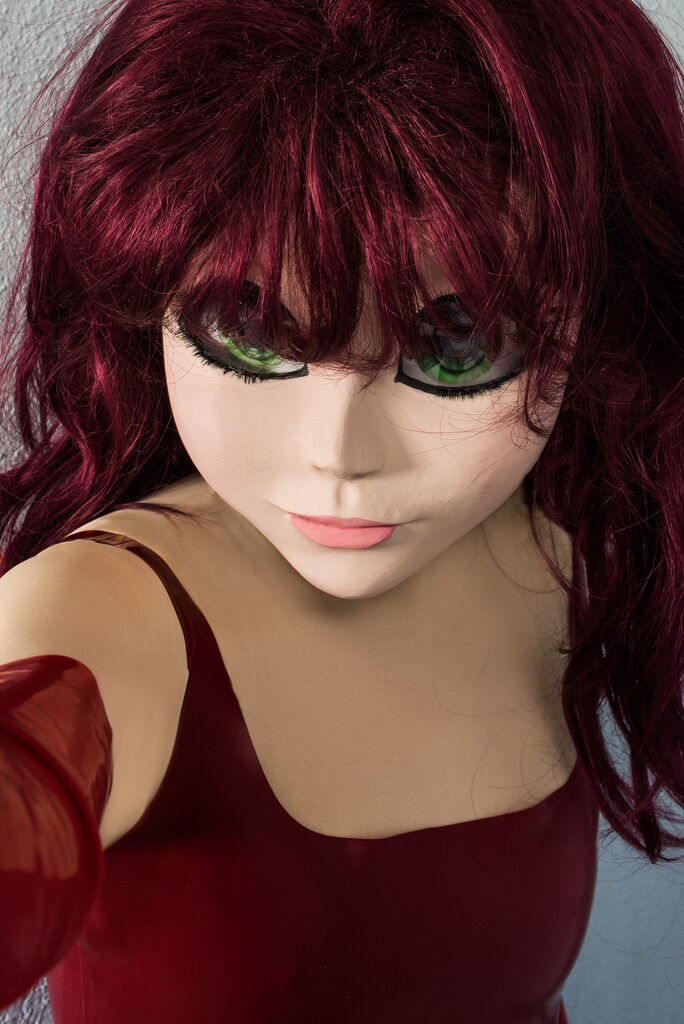 Laurie Simmons
Redhead/Red Dress/Selfie, 2014
Salon 94
Advertisement
TT: I often struggle with whether or not selfie culture is empowering for women. On one hand it’s this amazing thing that women have more control over their own image nowadays, but on the other hand we all seem to repeat the images that fashion magazines peddle to us, and feel inclined to present only our edited, perfect selves.
LS: Yes, everyone has control over their own image, but they also have hyper-control over the editing of their own image. We actually have the tools for this now. There are so many ways to present an inaccurate version of yourself. And that’s what I think about a lot, the alterations that people apply to their own images.
TT:  Yes, I also question whether our fantasy selves are valid, or even truer versions of ourselves, or less so.
LS: Well, the truth seems to be ever-evolving, it’s totally up for grabs. I feel like we’re living in a time where the truth is on your phone. [Laughs]. I think that we’re certainly living in an age where varying degrees of truth-telling are accepted. I guess that used to be called lying. On top of that we find ourselves in a culture of harsh critics who may not understand nuanced or constructive criticism Whatever you put out there, you can expect a reaction… whether you ask for it or not. 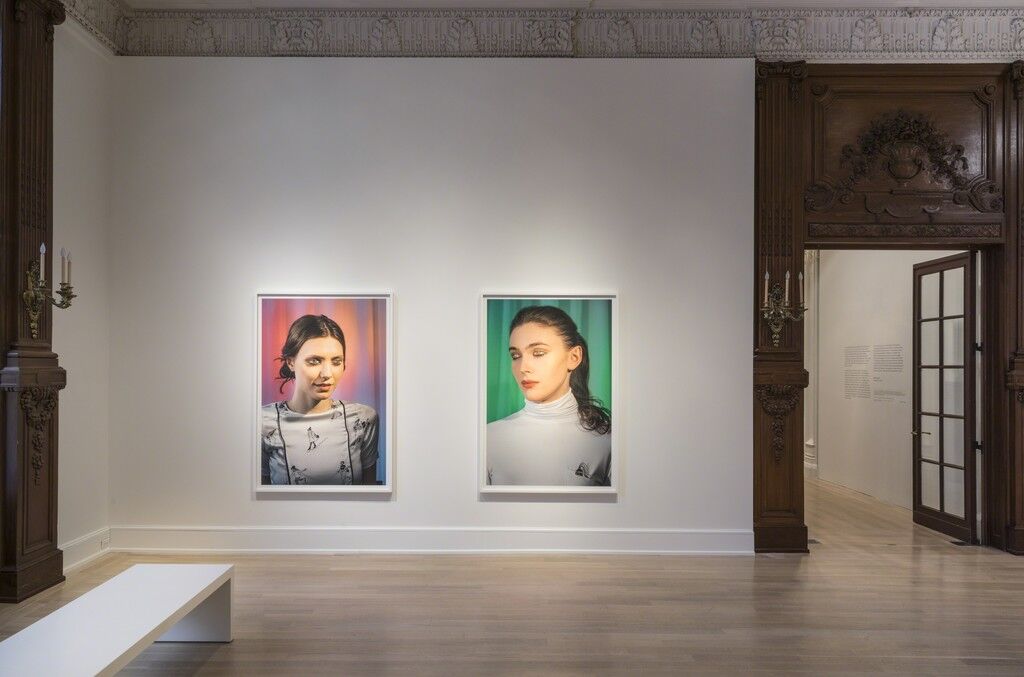 TT: You’re thinking of internet trolling and hate-mongering?
LS: Yes, it’s hard not to think about that. Writers, artists, Tweeters, and Instagrammers—forget about celebrities—everyone seems to be fair game and vulnerable to the “below the line” comments—you know, any digital article where it’s possible for people to have a discussion below the text.
TT: The internet enables some behaviors that can feel empowering in a positive way, and behaviors that can feel empowering in a very negative way for others.
LS:  Yeah, and I’m pretty much willing to go along for the whole ride as long as I’m alive. I’m really fascinated. And in some sense I’ve already gone to the dark place. I spend way too much time online. But the issue of trolling, and the nameless people out there—the kinds of things that they’re capable of saying and doing—it’s terrifying. I wonder how much the anticipation of that kind of criticism and takedown can affect what people actually do and say. How crippled can people become by their fear of criticism? I think about that a lot. TT:  Your more recent series of images depicts human models with painted eyelids, rather than dolls or humans with cosplay masks on. Was this decision an effort to get more at the human realities of your subjects, or why did you decide to work with the faces of real models for this series?
LS: I’ve always been interested in working with real models, and I’ve generally failed when I’ve tried. I guess what I need is some kind of interruption or disruption of the picture in order to make me comfortable working with a human model. I think when I put the cosplay masks on humans, I really liked having a model that could respond to commands—I was going to say “to simple commands,” [laughs]—but that they could interact and take direction was refreshing. And in my ongoing exploration of anime, cosplay, and Japanese culture, I kept coming across these YouTube makeup videos. There are just so many makeup videos for girls demonstrating how to transform themselves into anime characters. That’s where I found the painted eyes.
TT:  Really?
LS: Unfortunately, I could watch them all day long. I am really intrigued by the girls who are painting eyes on their own closed eyelids. That’s absolutely not something I invented; it’s been around for a while, and used in fashion. But I really love watching them paint. And I also love the idea of these eyes that can’t see, and how real they can look. I’m not as interested in the big anime eyes as I am in recreating the eyes that are underneath closed lids. And that’s when I started inviting makeup artists in to paint the eyes, which is a very specific skill.
Interestingly, one of the makeup artists—Landy Dean—when he was either teaching a class or demonstrating an example of a makeup look on a model—would draw the entire eye on the palm of his hand. The makeup artist James Kaliardos tended to work from the model’s real eyes… like painting from life. 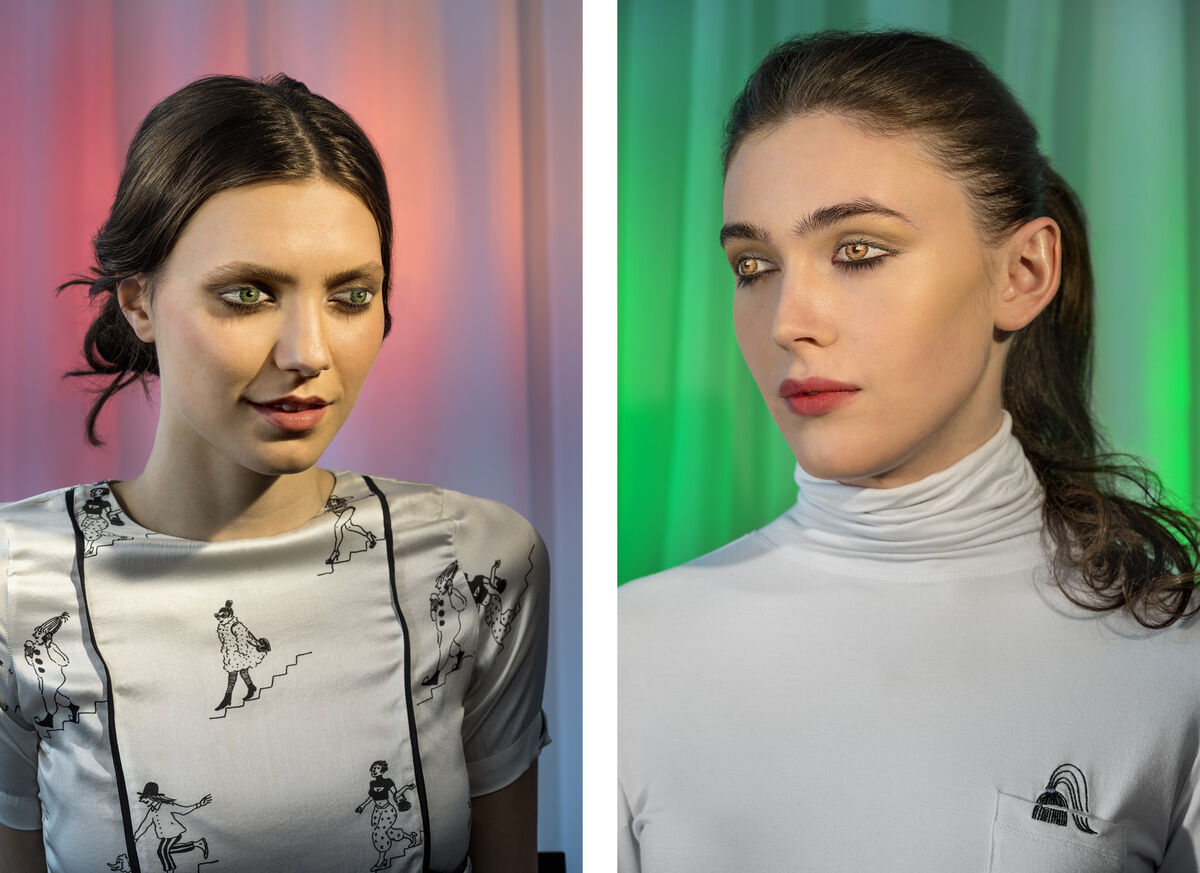 TT: Without having the actual human eye in your images, was it difficult to get the kind of expression you wanted?
LS: Well, the responsibility was all mine. I could say to my model, “Could you turn to your left,” or just, “Lower your chin,” but I had to find their gaze. I had to find the place where they were looking at me by using my camera. If I shot 100 pictures, we would sit in the studio and edit on the computer, until we found one where we felt that the model was really looking at us. It was a little bit of that Mona Lisa thing. I was taken to see Mona Lisa at the Met as a young child, and the only thing my mother said was, “See how she looks at you from anywhere in the room.” We were trying to find the sweet spot where it felt like the models were engaging with the camera. That said, I did pick some pictures where the model is daydreaming or gazing off into space. I picked whatever I thought felt real.
TT: Projection seems to play a big part in a viewer’s relationship to your photographs, which I think is also just the nature of the still image versus the moving image. It’s often easy to project your own emotions and identity onto the subjects of your photographs. Moving images somehow have more autonomy. As someone who has also worked in film, how do the two mediums feel different to you?
LS: I was terrified when I made my first film because I thought I had to make one million perfect stills. I realized in working in film just how much movement will change things.
TT: I understand you’ll be shooting a narrative feature this summer called My Art and that it’s about an artist making work? Is the film somewhat autobiographical?
LS:  No, it’s not. There are so many things I know about being an artist just because I’ve been around artists for most of my life. It’s not autobiographical, but I think I know the character well, and the character is a kind of amalgam of women artists I’ve known. The movie is about an artist, and the artist makes work in the movie, kind of in real-time. I’m hoping that the artist’s process will be really transparent. The artist’s work won’t be unfamiliar, but it brings up this whole issue of making art for a movie. I feel like if I was inventing groundbreaking art for a movie, that I wouldn’t put that art in a movie—I would save it. [Laughs].
—Tess Thackara
“Laurie Simmons: How We See” is on view at The Jewish Museum, new York, Mar. 13–Aug. 9, 2015.
Follow The Jewish Museum on Artsy.
Related Stories