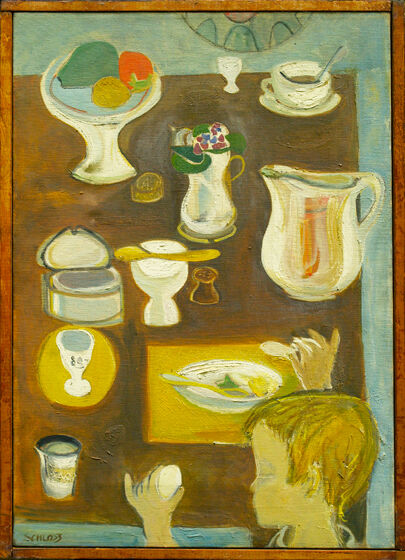 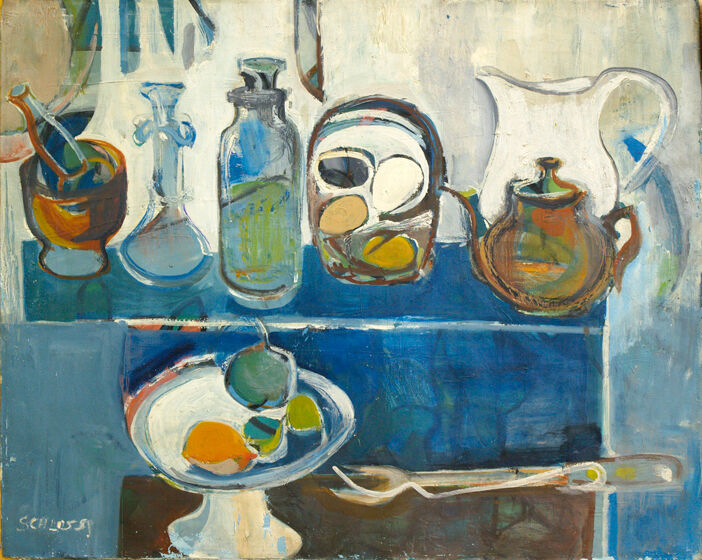 Edith Schloss
Still Life, 1951
Sundaram Tagore Gallery
Curated by Jason Andrew, the show presents work by one of the leading members of the New York School, which also included
Lee Krasner
and
Jackson Pollock
,
Elaine
and
Willem de Kooning
,
Mark Rothko
, and Schloss’s husband,
Rudy Burckhardt
. An expatriate of Germany, Schloss was a key player in the largely immigrant art scene. She had a broad and deep education in pan-European culture, upon which she drew for her paintings, assemblages, collages, and drawings. 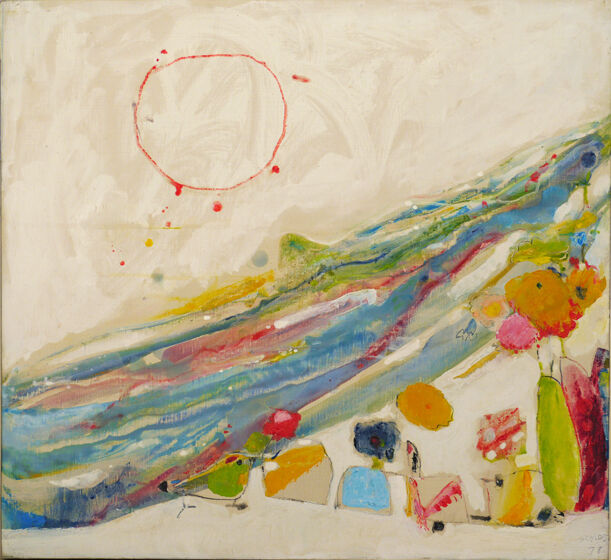 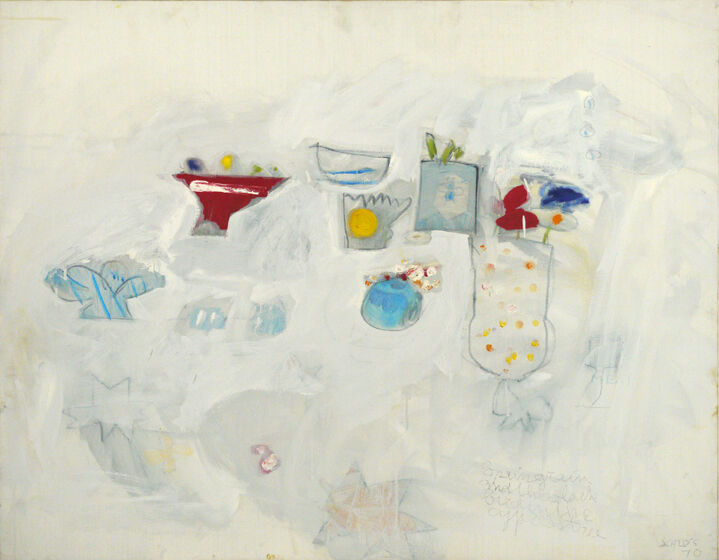 Edith Schloss
Spring Rain and the Black Bird in the Cypress Tree, 1970
Sundaram Tagore Gallery
Schloss once said, “Art is nourishment which is made from the fabric of our daily life but lifts us beyond it to make us see a world bigger than ourselves.” Her interest in everyday situations (and perhaps the influence of
Giorgio Morandi
) is apparent in works such as Egg Eater (1950) and Still Life (1951), both of which feature
still lifes
of tables in use and are reminiscent of genre painting. The various pitchers and plates become fields of reflected and absorbed color and
Cubist
-style tilted perspectives, which capture the scenes’ totality. Similar forms recur in later works, such as Spring Rain and the Black Bird in the Cypress Tree (1970) and By the Wave (1978), though in much more abstracted form. 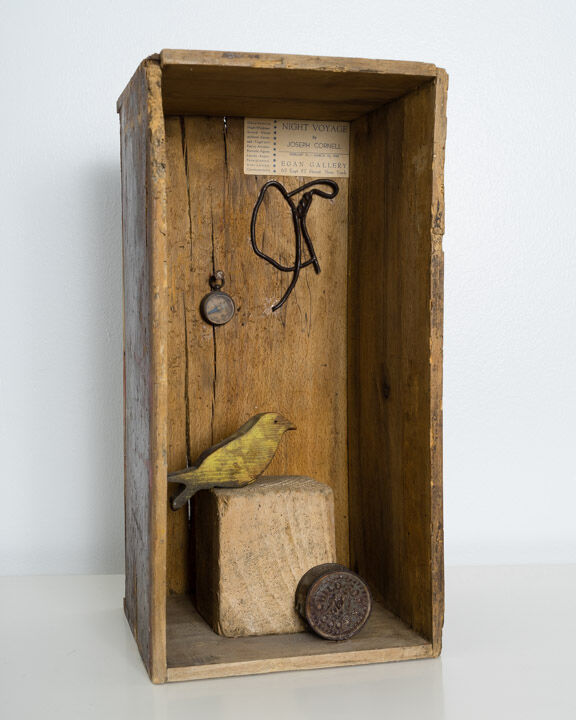 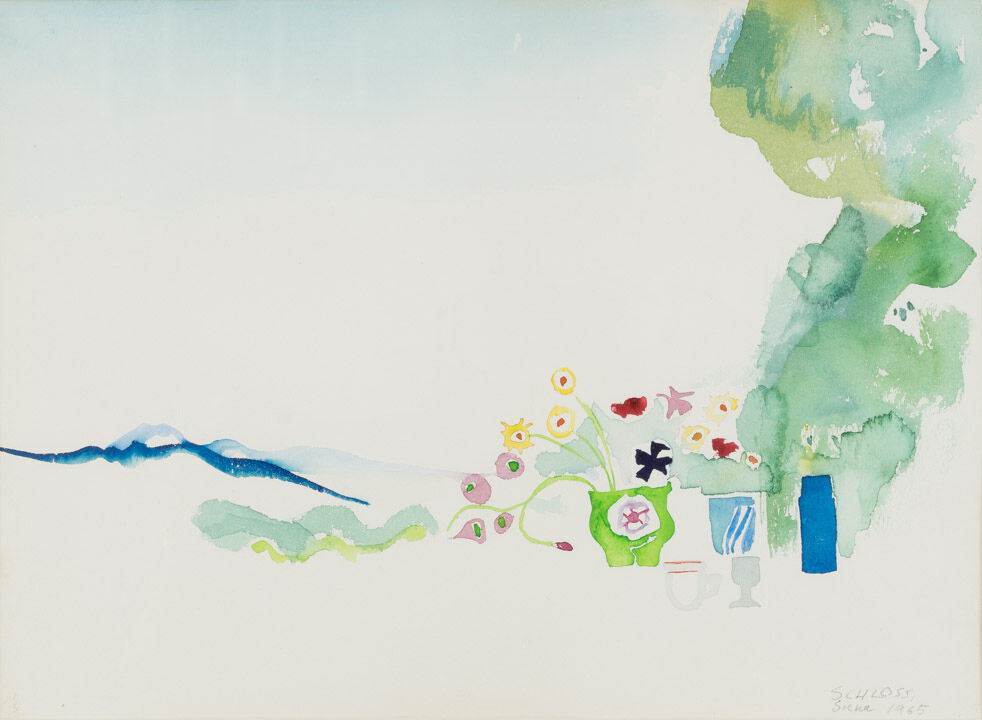 Edith Schloss
Mount Amiata, 1965
Sundaram Tagore Gallery
Advertisement
Her sociability and affection for her colleagues can be seen in many works. Her 1962 sculpture, Night Voyage: Homage to Joseph Cornell, pays loving tribute to
Cornell
, a quixotic maker of
assemblages
. She mimics his use of boxes as metaphors and allusions, filling her own with a pocket watch, a carved wooden bird, and an exhibition announcement for Cornell’s 1953 show at Egan Gallery.
Schloss achieves numerous effects in her
watercolors
, emphasizing textures and forms through  her pointed deployment of color, in a manner similar to painters like
Joan Mitchell
. In Mont Amiata (1965), a still life-as-
landscape
, the top of the paper fades gradually and seamlessly from a pale turquoise. At right, verdant green tones, in a mix of dry and wet brushstrokes, suggest foliage limning a central still life: a vase and chalices in bright green, blues, white, and red. Pink flowers burst at center. All the colorful activity of the image serves as a busy counterpoint to the spare depiction of Tuscany’s Mont Amiata, drawn with one blue line in the distance.
Schloss is less known today than many of her contemporaries but is no less talented. Her work stands as a bridge between their radical reinvention of painting and the old world that they left behind. She was a painter of pictures, but also a painter of life.
—Stephen Dillon
“Edith Schloss: Still Life, Myths, and Mountains, A Retrospective” is on view at Sundaram Tagore Gallery, New York, Feb. 26–Mar. 28, 2015.
Follow Sundaram Tagore Gallery on Artsy.
Related Stories