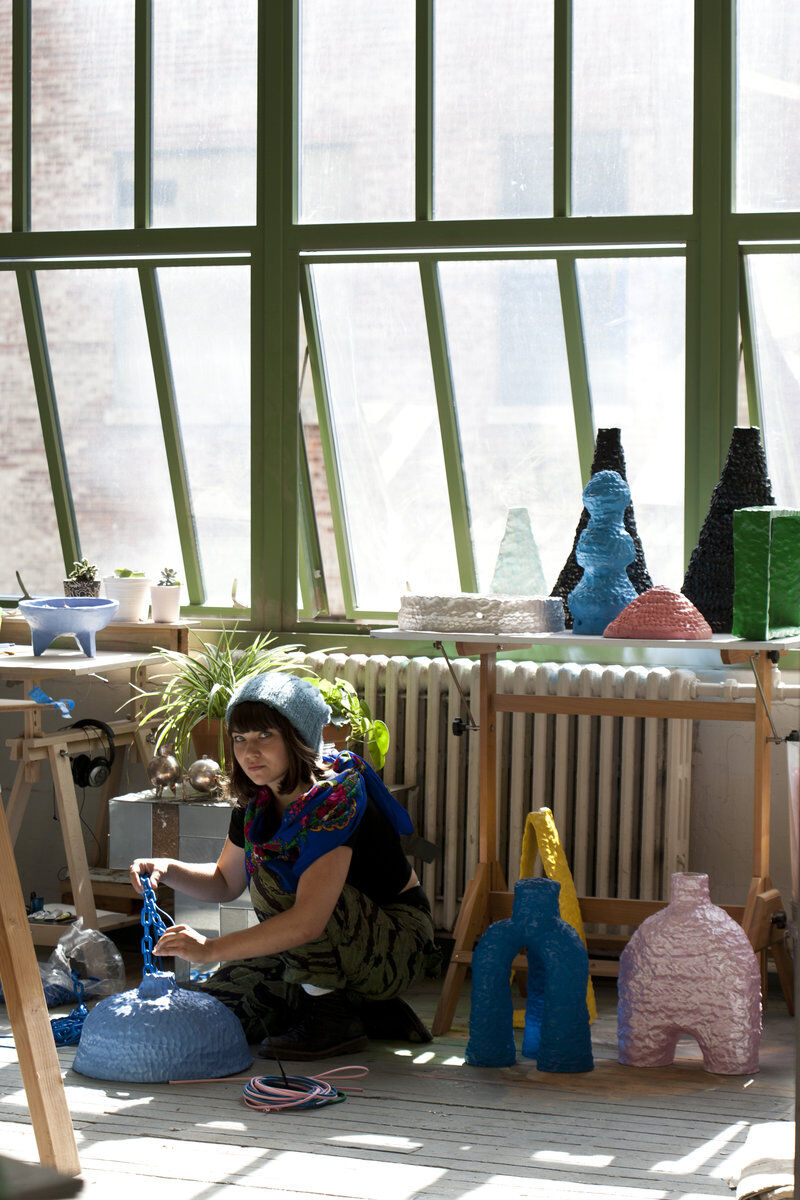 “I see so much potential in everything!” exclaims
Katie Stout
, the newly-appointed winner of Ellen’s Design Challenge on HGTV, as she wanders through a recycling warehouse on the show’s penultimate episode. While Stout is here referring to her material choices, the Brooklyn-based furniture designer’s performance on the competition series—and her design practice as a whole—amplify this statement almost as a mantra.
Stout’s wit, playful charisma, and exceptionally high taste level carry through from her ebullient TV personality to each of her irreverent design objects—from rugs that look like hats or gongs, to knit chairs so soft they collapse when sat upon, to the ultra-modern, Memphis design-influenced pieces she developed on HGTV. Just before the announcement of her (upset!) win, we caught up with Stout to discuss her inspirations, her thoughts on the difference between art and design, and her future plans as a young designer and new TV star—with a $100,000 prize in tow.
Artsy: How would you describe your work in one sentence or phrase?
Katie Stout: Naive pop. 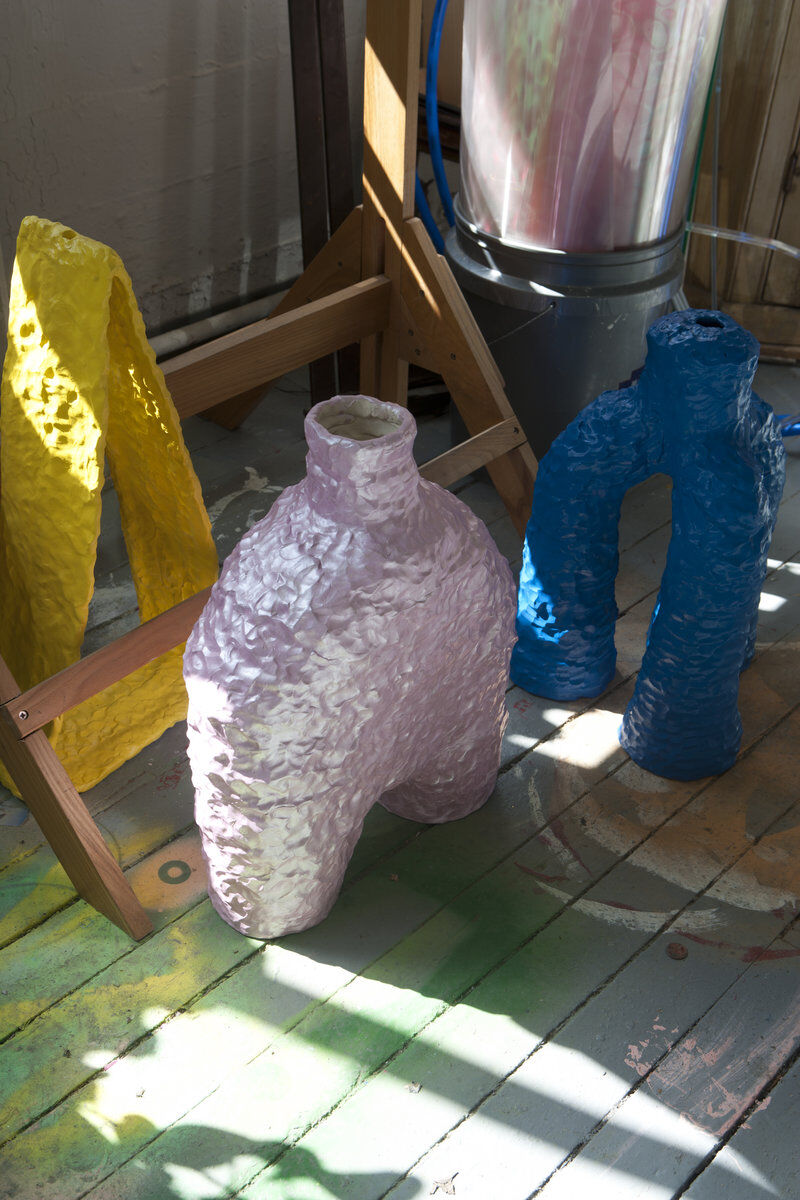 Advertisement
Artsy: Considering the strong conceptual slant in your work—non-functional soft chairs, the gong and eye rugs—can you talk about what path led you towards design in particular rather than art?
KS: I like making objects that people will actually use. That interaction is very important to me. Whether the piece is fully functional or not, I want it to be handled and worn. I want people to mark the things I make with their own stories. Art seems more fragile and less flexible in that regard. With that said, I don’t think I have to be either/or, I think I’m both a designer and an artist. 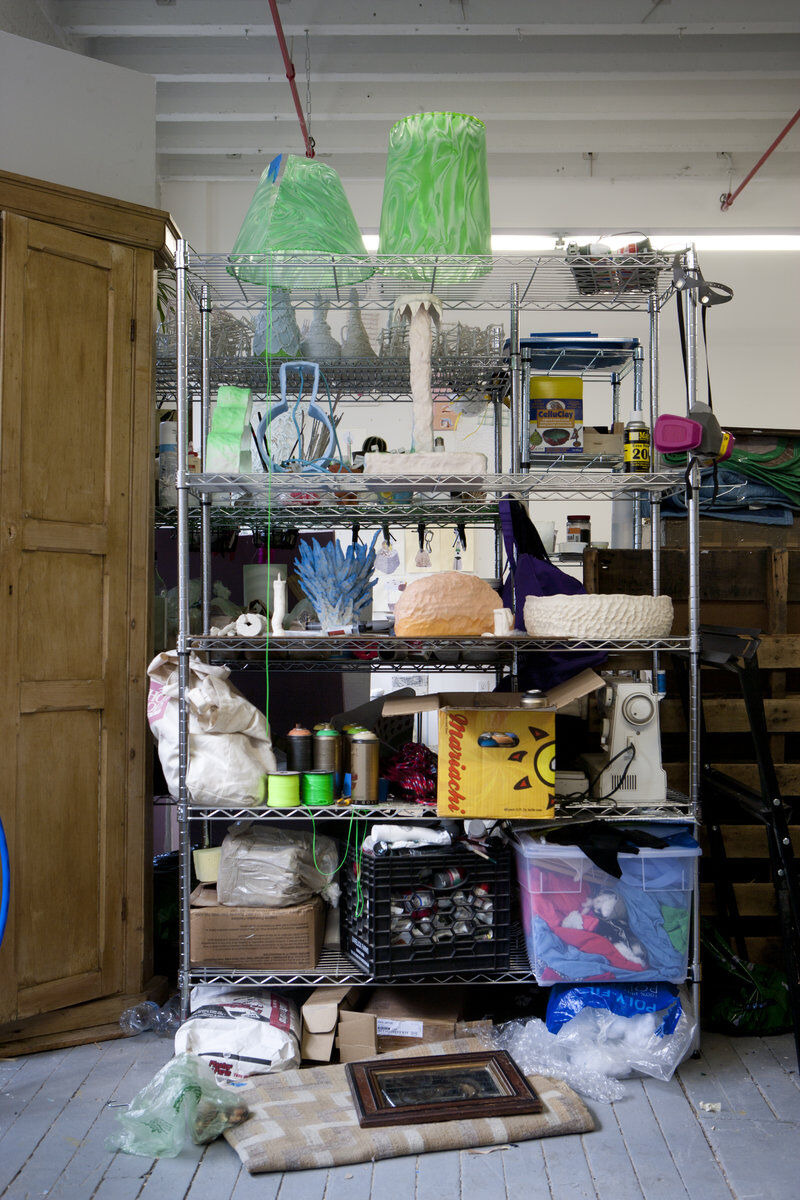 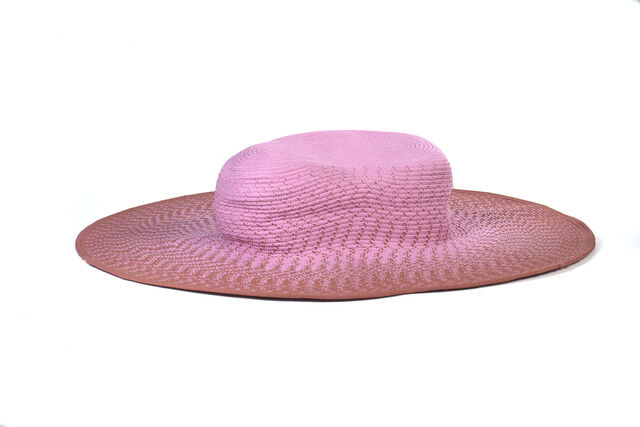 Katie Stout
Rug, 2014
Johnson Trading Gallery
Artsy: A colorful, almost Seussian spirit seems to unite your work—who or what inspires your aesthetic?
KS: Part of the reason I make work that’s so light is because homes can be beacons of melodrama. My upbringing was pretty dysfunctional—the first time I saw a photo of my whole family together (mother, father, brother, me) I was 20. It was in a photo album that my friend’s mother had put together and given me after my mother died. I was 10 in the photo. The ironic thing was that my mother had been a family portrait photographer for about two decades so our house was filled with photos of other people’s families.
I think subconsciously it’s this dark irony that pushes and inspires me to make what I make. I want people to live with unexpected objects that are subtly subversive—things that are “feel-good” but have a certain self-awareness about what they are or what they aren’t. I have an urge to characterize anything that takes itself too seriously. I think that design, especially, has a tendency to takes itself too seriously. I don’t think there’s any reason that the things we are familiar with have to look or function in a certain way.
I’m inspired by: suburbia; pop; automatism;
Yayoi Kusama
;
Art Brut
; stuff I see on Instagram; pretty much nothing I read on Twitter; Bernhard Wilhelm; Prada; Katy Perry; Samsung; The Offspring; Bagels; credit cards; farms;
Bauhaus
;
John Waters
; Raymour and Flanigan;
Charlotte Perriand
… 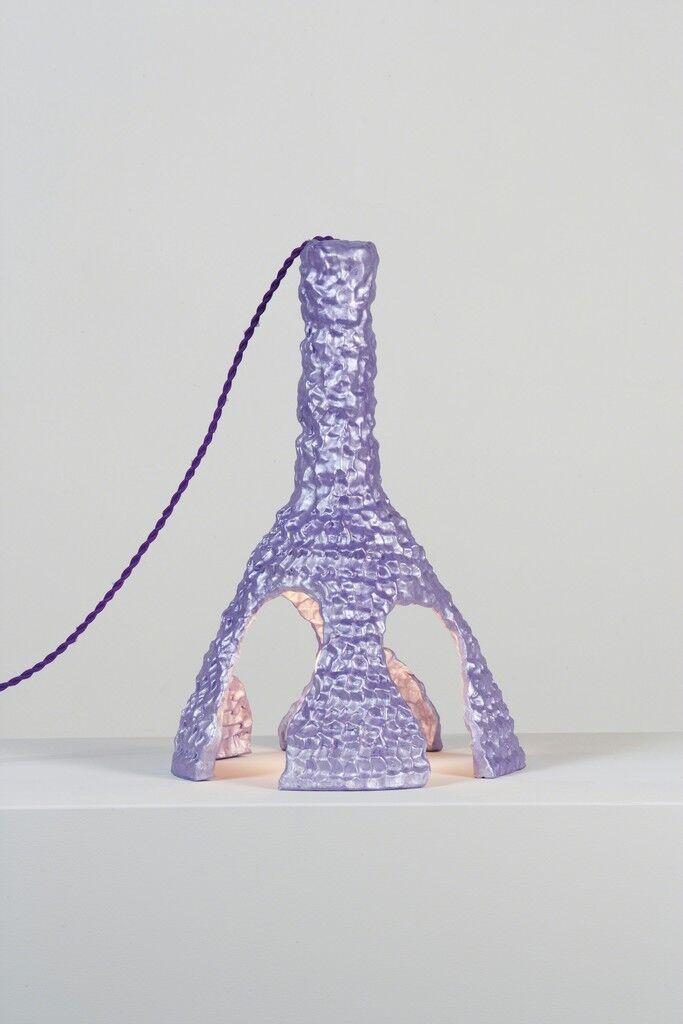 Katie Stout and Sean Gerstley
Purple Lamp, 2013
Johnson Trading Gallery
Artsy: Much of your work up to this point has been made with others, like artist
Kate Fox
, textile designer Zev Schwartz, and sculptor
Sean Gerstley
. What role does collaboration play in your process?
KS: Part of me just uses collaboration as an excuse to work with my friends. From a more pragmatic stance, I’m not committed to any sort of material or method of doing things, so sometimes I need to work with people who are familiar with a material or method. My collaboration with Sean is particularly special because we went to high school and RISD together. He’s a ceramist and builds most of the pieces while I direct the form and the details to make the lamps into more of a “designed” piece.
Artsy: We’d love to hear about your recent experience on the HGTV show Ellen’s Design Challenge. How did you come to be on the show? What were some highlights? What was the most challenging part of being on the show? Would you do it again?
KS: My experience on Ellen’s Design Challenge was actually really positive. I don’t think I’ve had more fun in my entire life—it was like the ultimate residency in the most surreal environment. I had a chance to work with a super talented carpenter, Karl Champley, who knew how to build things far more efficiently than I can and I also had the opportunity to work with materials I don't usually work with (plastic) and I learned how to use tools I had never used, like the CNC machine. It was especially great because there were no other distractions, the show was the only thing I was doing for a month. I didn’t have to worry about all of the silly day-to-day things that come up.
I found out about the show because my roommate at the time,
Misha Kahn
, received an email from a talent scout about it. We wanted to apply together as a package deal but for some twisted reason only I got called back. I didn’t know anything about the show until months into the application process when they said it would be hosted by Ellen Degeneres and be on HGTV.
The most challenging aspect of the show was the actual challenges. I think I struggled with the final challenge the most. I obviously knew that everything would be on TV, so I had to kind of dissociate myself from what I was making or else I would have been paralyzed.
The most surreal part about the show now is watching it and reading comments about it on social media. I have a lot of people who like me but I also have a lot of haters. It’s weird, I didn’t expect to be such a polarizing character. Artsy: What’s next for you?
KS: Just more. More space, more projects, more collaborations. I put all of my stuff from my apartment and studio into storage this week and I’m moving to L.A. to set up a studio there. I need more space to make larger pieces and then have a show with Johnson Trading Gallery. 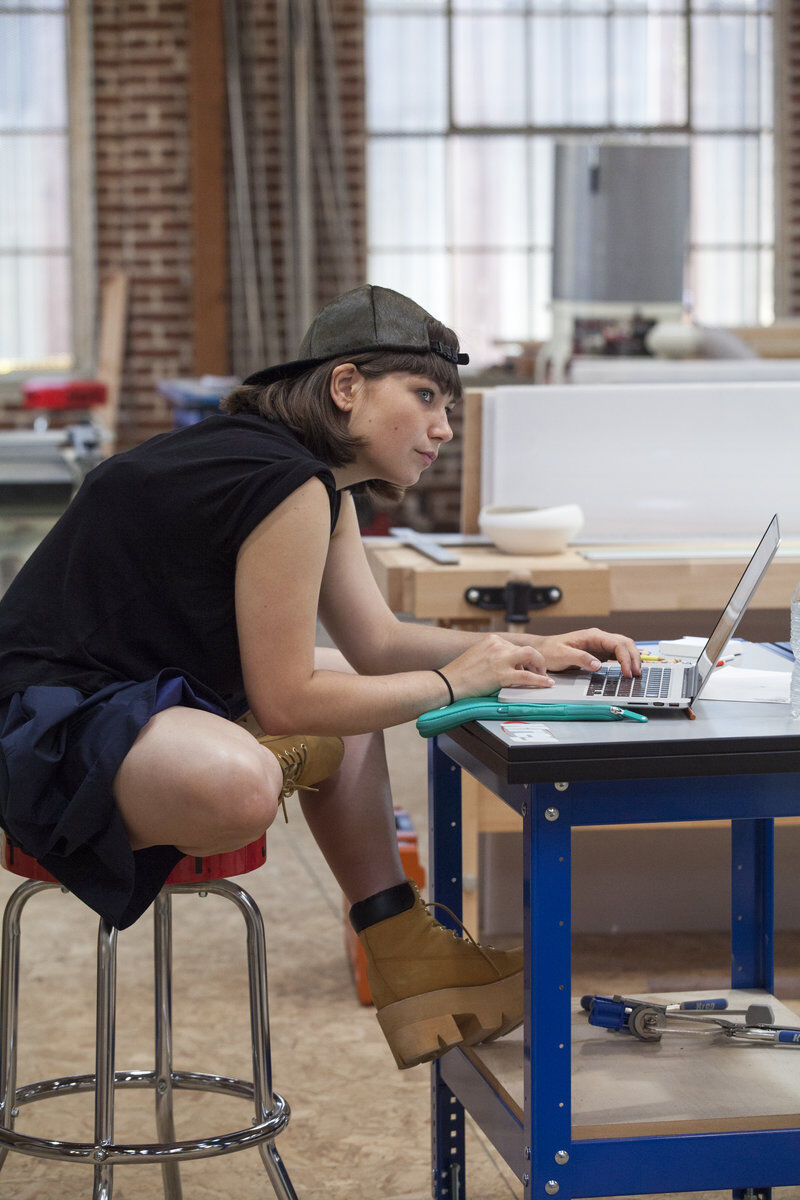