Artsy Editors
Feb 1, 2015 7:00pm
Knakorn Kachacheewa (a.k.a. Kanakorn Kashashiva) will present a suite of recent paintings in the upcoming solo exhibition. These works are more grounded in naturalism than Kachacheewa’s earlier compositions, which feature abstracted and iconographic images of solitary flora or people, but retains his fable-like depictions of people in magical landscapes. Here, more signs of the contemporary have found their way into his parables: sunglasses, swimming pools, pistols.
Much of his work resembles portraiture, focusing on one woman in a theatrical, jungle-like scene. In Woman on Horseback (2014), a young lady sits backwards on a small pony. The two are surrounded by a scrim printed with vertiginous plants, beyond which can be seen the sea and a cloudy sky. Except for a pink shoe, the woman’s body is clothed only in images, which overlap and intrude on one another in a dream-like way. Kachacheewa uses a similar image in Pool Party (2014), in which two girls sit back-to-back, making similar gestures. One is naturalistically rendered; the other is a silhouette composed of similarly interwoven scenes, like the girl on the horse. They are also, again, backed by a theatrical inset of a plant. 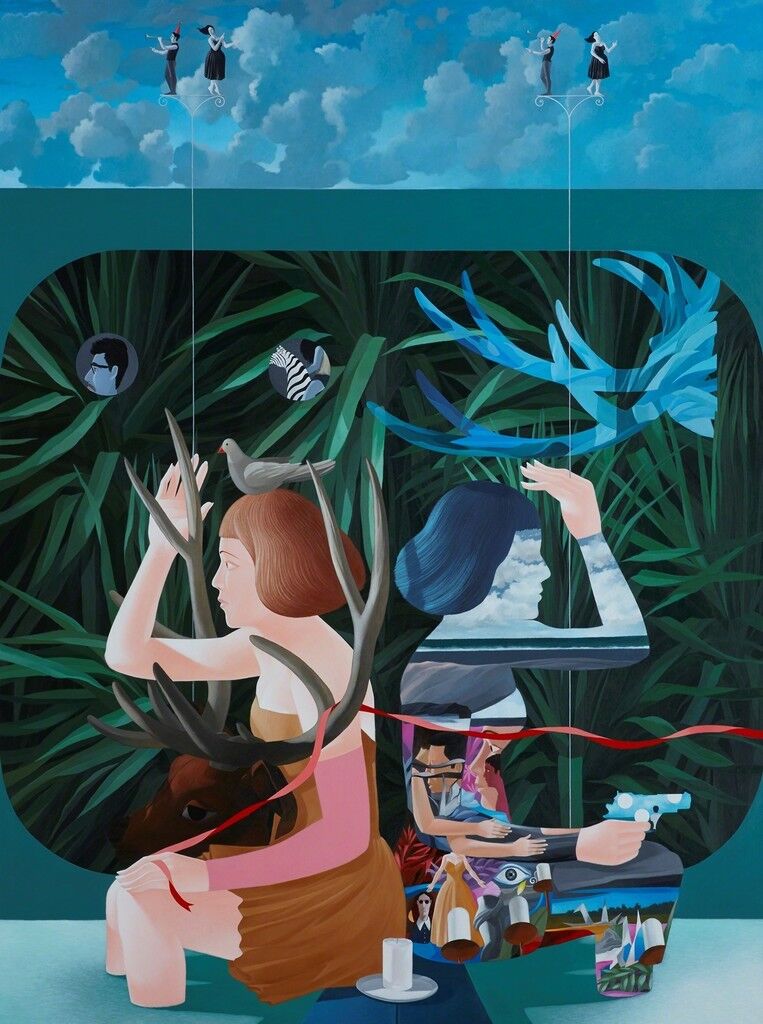 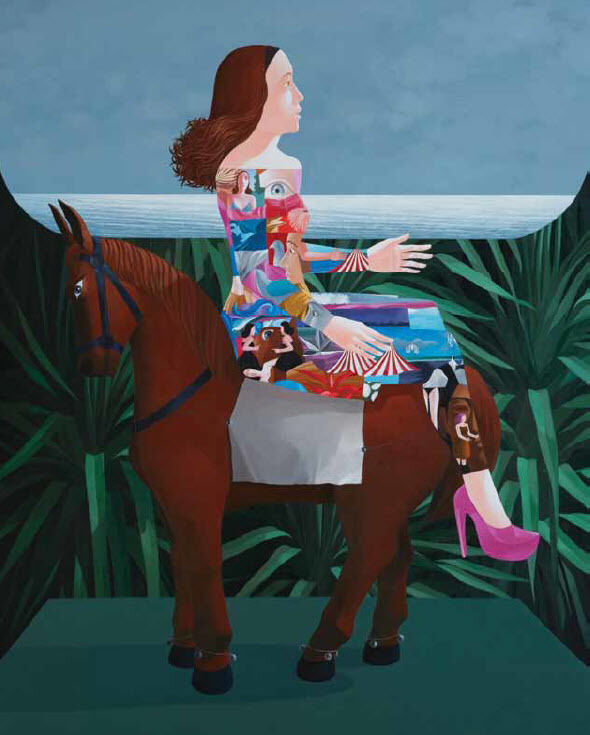 Knakorn Kachacheewa
Woman on Horseback, 2014
Ode to Art
Some images reappear in many of Kachacheewa’s works, as the artist invents his own surrealist lexicon. Antlers surface not only in Pool Party, but also in Victoria Waterlily and Old Passion (both 2014). His stylized depiction of these icons heightens their archetypal impact, similar to the mythos-rich paintings of
Rousseau
. And like those of Rousseau, Kachacheewa’s models take classical poses, such as the archaic presentation of the central character in Old Passion: she wears a light dress and sunglasses, holding a bird and horns (which seem to sprout from an invented, composite creature), but her arms are stiffly composed, her posture perfectly erect like an ancient statue. 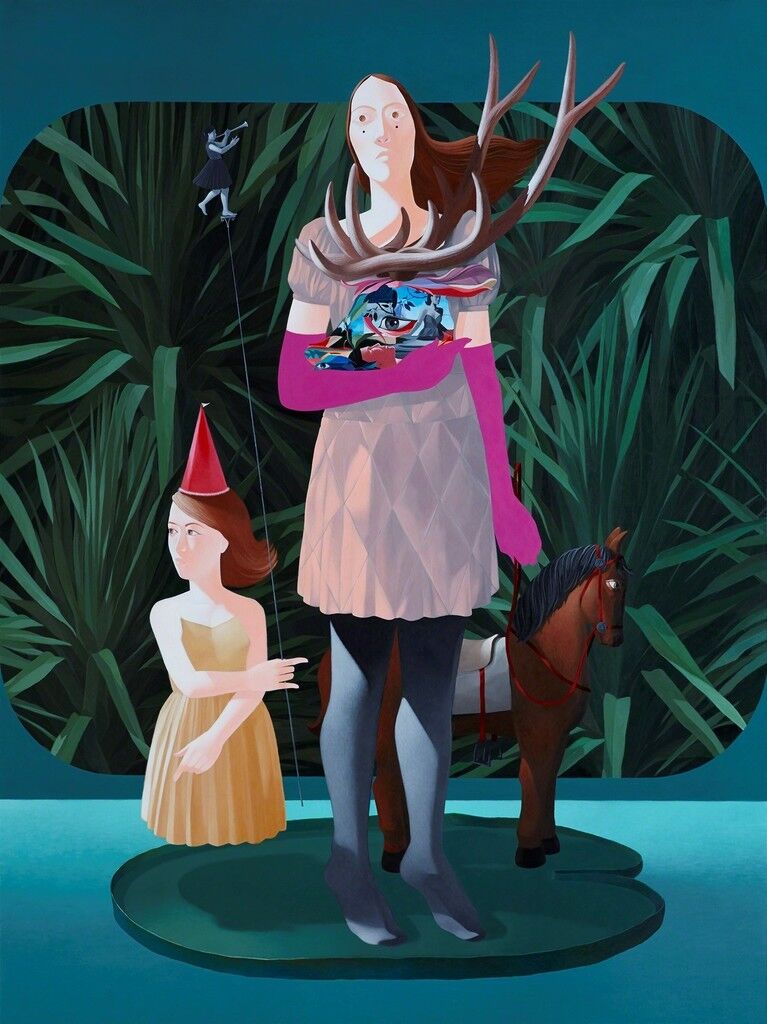 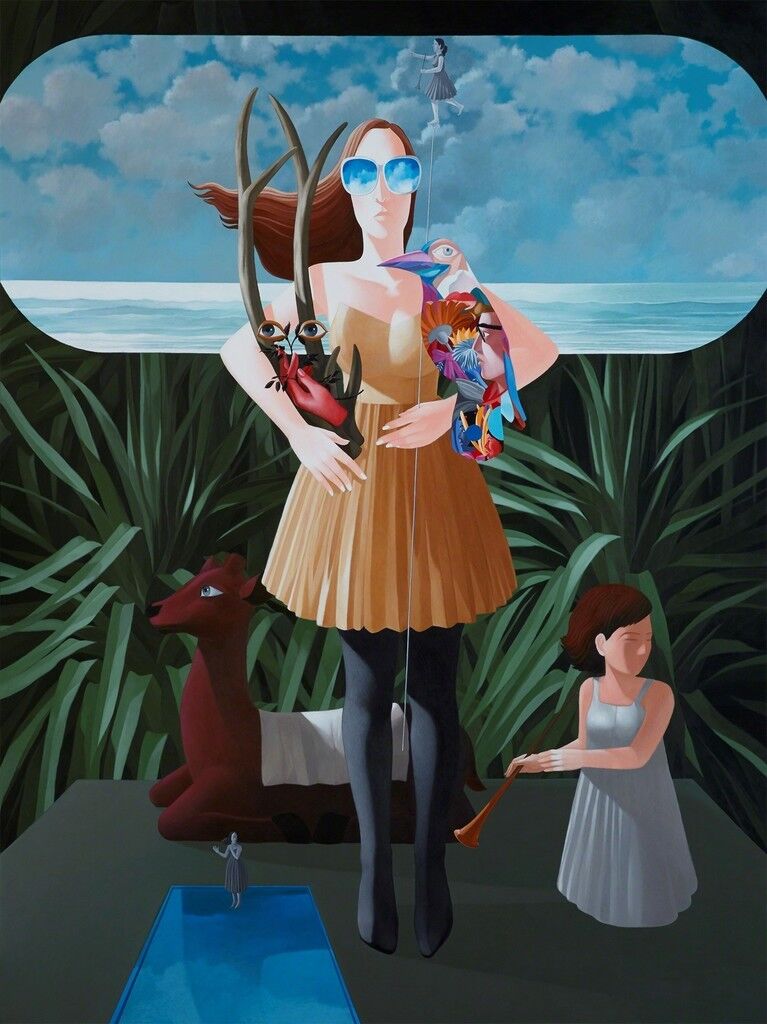 Knakorn Kachacheewa
Old Passion, 2014
Ode to Art
Advertisement
Other scenes appear far more casual. In Pool (2012), a man and a woman rest at the edge of a pool, backs to the viewer. It resembles the casual domestic vignettes of
Alex Katz
. The couple stares at a wall of leafy plants, above which, magically or allegorically, float portraits and a small segment of landscape with a cloudy sky. Here, Kachacheewa seems to channel
René Magritte
—particularly in the earlier painter’s interest in clouds, his trick lighting, and his ability to make the everyday phenomenal and mysterious. 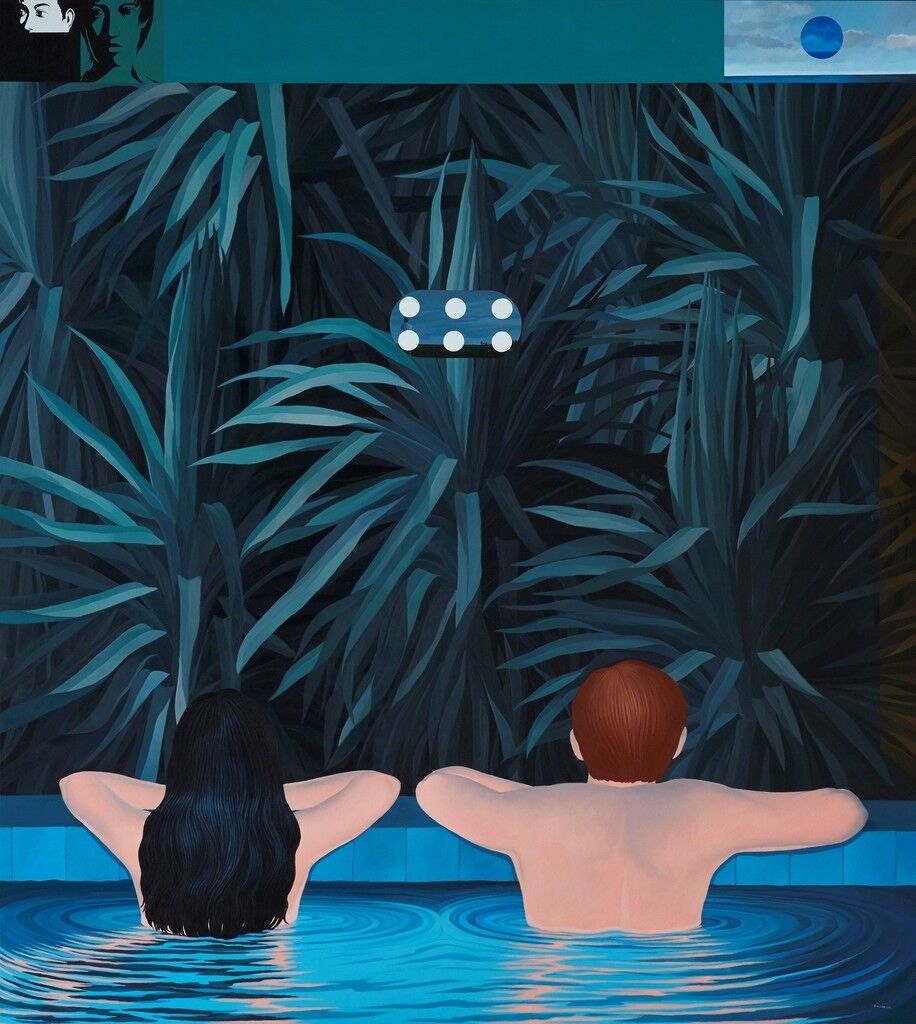 Knakorn Kachacheewa
Pool, 2012
Ode to Art
Kachacheewa reinvents older forms, bringing them into the present. He achieves the
surrealist
aim of making the familiar seem foreign, in part by making surrealism itself seemnovel and excitingly strange.
—Stephen Dillon
“Knakorn Kachacheewa” is on view at Ode to Art, Singapore, Mar. 5–15, 2015.
Follow Ode to Art on Artsy.
Related Stories