The 10 Artists You Shouldn’t Miss in Miami This Week

Artsy Editors
Nov 24, 2014 8:51pm
Hundreds upon hundreds of artists will be shown in Miami over the course of Art Basel, and with so much to see, we’ve narrowed down—with the help of Artsy specialists—a list of artists to watch in the midst of this frenzy. Here are 10 artists from across the fairs who deserve your attention, all on the rise or exploring new styles in their work, with exciting solo shows open now and in the near future. From nature-inspired design to digital painting, our roster covers a vast cross section of the art world and spotlights artists set to provide not just great work in Miami, but to continue pushing boundaries as their careers develop further.

on view at Roberts & Tilton 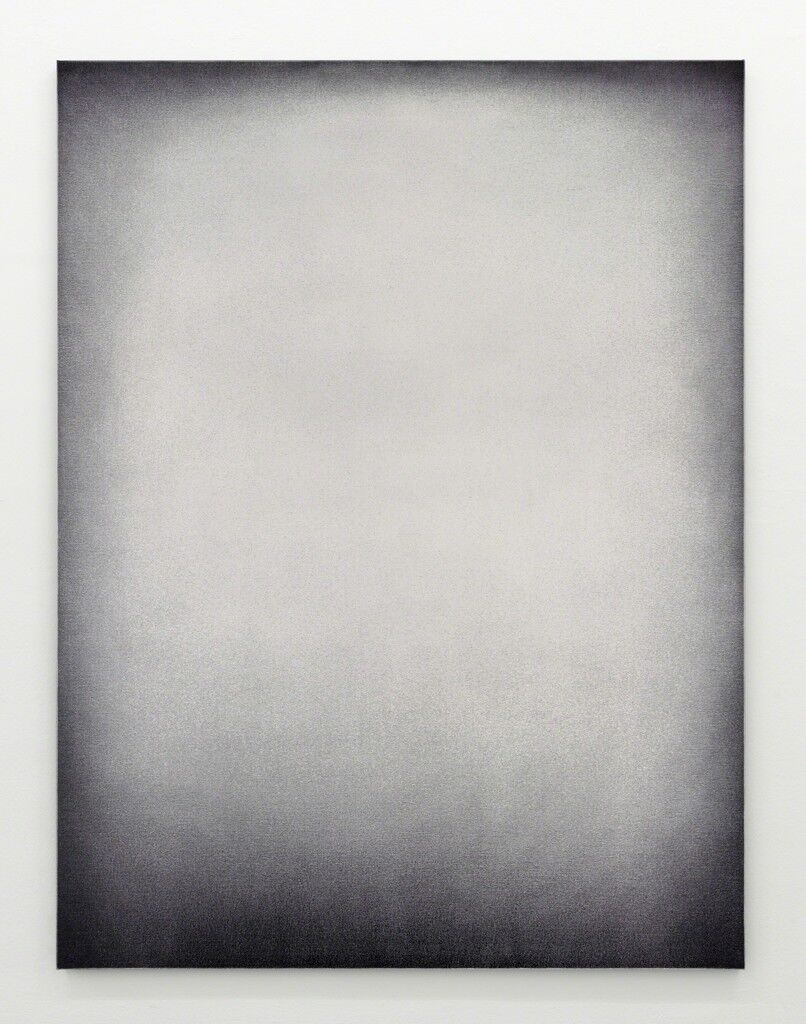 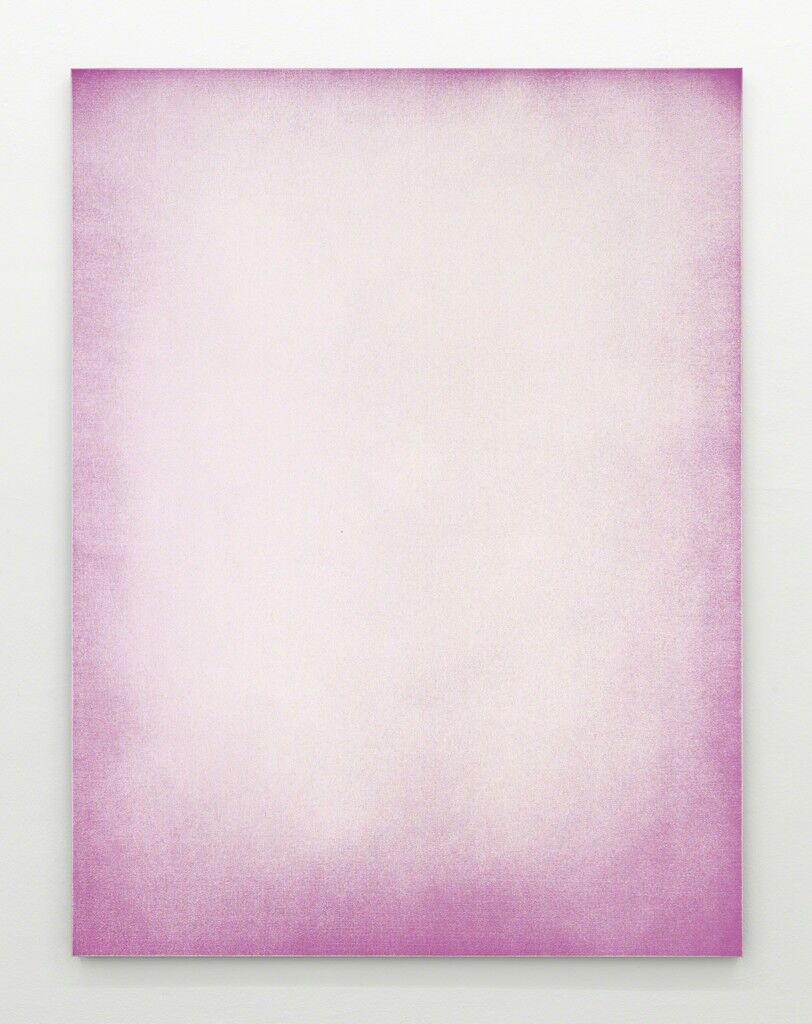 Thomas Wachholz
MAGENTA 0/100/0/0, 2014
Roberts & Tilton
Thomas Wachholz, currently studying under
Katharina Grosse
and
Marcel Odenbach
at the Kunstakademie Düsseldorf, lives and works in Cologne. Wachholz’s first solo show, “Alkoholarbeiten” at An der Shanz 1A in Cologne, opened in November of last year, and has been quickly followed up by two new solo shows: “Alcohol Works” at Roberts & Tilton in Culver City, CA (which marks his U.S. debut), and “Reibfläche” at RaebervonStenglin in Zürich (his first show in Switzerland). In his work, Wachholz alters the surface of paper (or other materials, as his practice expands) using assorted substances, such as chemicals or matches. In “Alcohol Works,” Wachholz presents a series of digital paintings printed within the CMYK spectrum—cyan, magenta, yellow, key (black), the standard ink colors used in printers—which he has destroyed with ethanol in a process that combines the digital and the analog, rubbing away, fading, and erasing the colors. Similarly, “Reibfläche” (which translates literally to “friction surface”) confronts viewers with a wall that has been entirely painted with the phosphorous mixture used on matchboxes and invites viewers to strike matches (provided in the gallery) along its surface, leaving marks and thereby adding to its development as an artwork.

on view at Travesía Cuatro 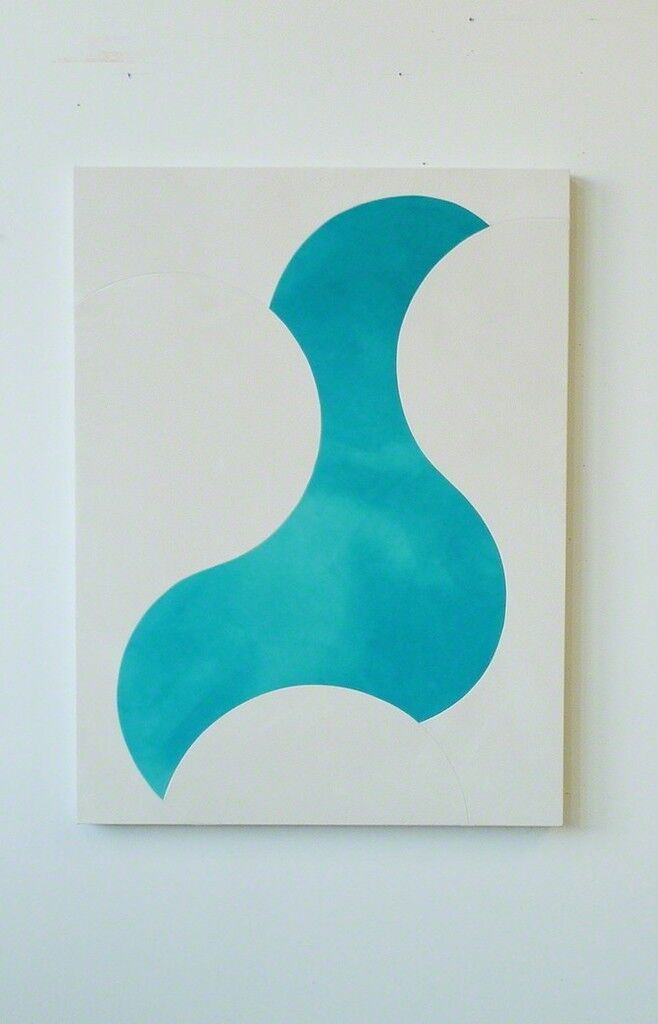 Sarah Crowner
Italian tiles, 2014
Travesia Cuatro
Advertisement
Playing off of the hard-edge abstraction of the 1950s and ’60s, Brooklyn-based Sarah Crowner fuses crafting with painting by sewing together geometric pieces of canvas, forming clean blocks of color. Crowner’s colorful works are caught between textile and painting, with seams visible on their otherwise crisp surfaces, producing a finely patchworked appearance. Newer works use single-tone swaths of canvas, allowing the seams alone to create the image. Crowner was recently taken on by Casey Kaplan, following her successful solo show “The Wave” in January 2014 at Nicelle Beauchene Gallery, both in New York, and has a current show at Travesía Cuatro’s Guadalajara space.

on view at Real Fine Arts

Neither purely abstract nor quite figurative, Jon Pestoni’s expressive paintings take the act of painting itself as subject, in what is a relatively recent development in the artist’s style. Application, color, brushstroke, and material feature prominently in his large canvases, where layers of oil paint are built upon each other with varying degrees of opacity; the viewer is left with the impression that certain images are concealed, that they may not be fully seeing the work, heightening their awareness of its composition and process. Pestoni lives and works in L.A., but shows often on both coasts, with solo shows in 2013 at Shane Campbell Gallery in Chicago and Real Fine Arts in Brooklyn.

On view at Nilufar Gallery 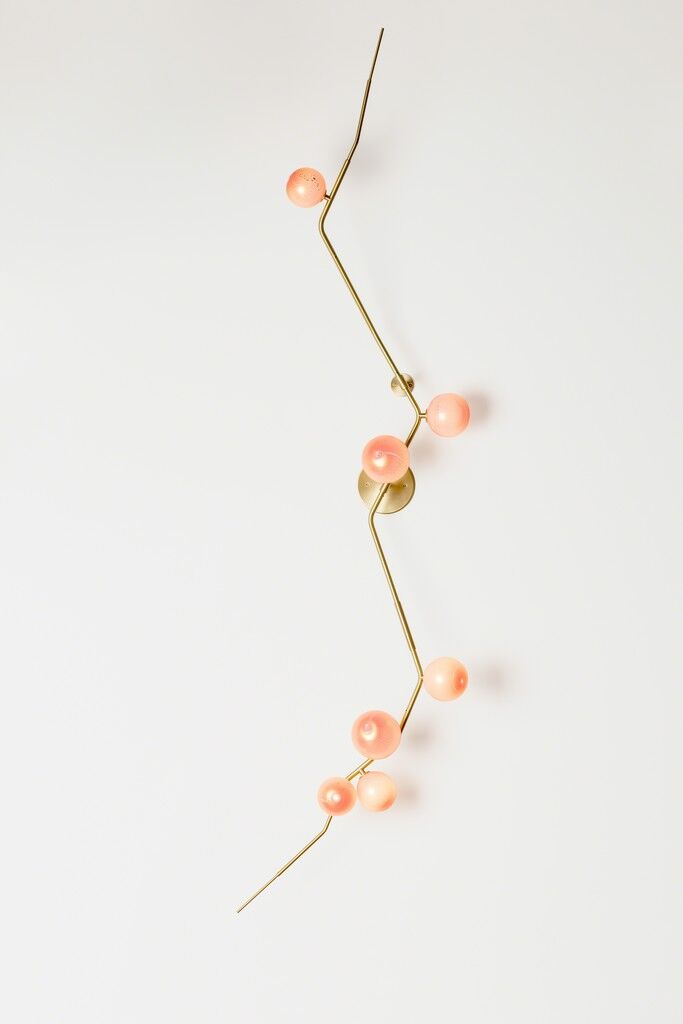 Lindsey Adelman
Cherry Bomb collection, 2014
Nilufar Gallery
From the New York-based studio she founded in 2006, Lindsey Adelman creates lighting fixtures by blending hand-blown glass, knotted-up lengths of rope, brass and bronze accents, metal clamps and chains, wood, and porcelain. Her pieces have a handcrafted feel, while still appearing precisely made and supremely elegant. Inspired by naturally occurring forms, Adelman’s signature piece is her branching chandelier, with spindly, mechanical metal arms extending in every direction, presenting organic hand-blown glass orbs at their points. Adelman’s industrial take on nature has since grown to include vessels, jewelry, tiles, and even wallpaper.

On view at Edward Cella Art and Architecture 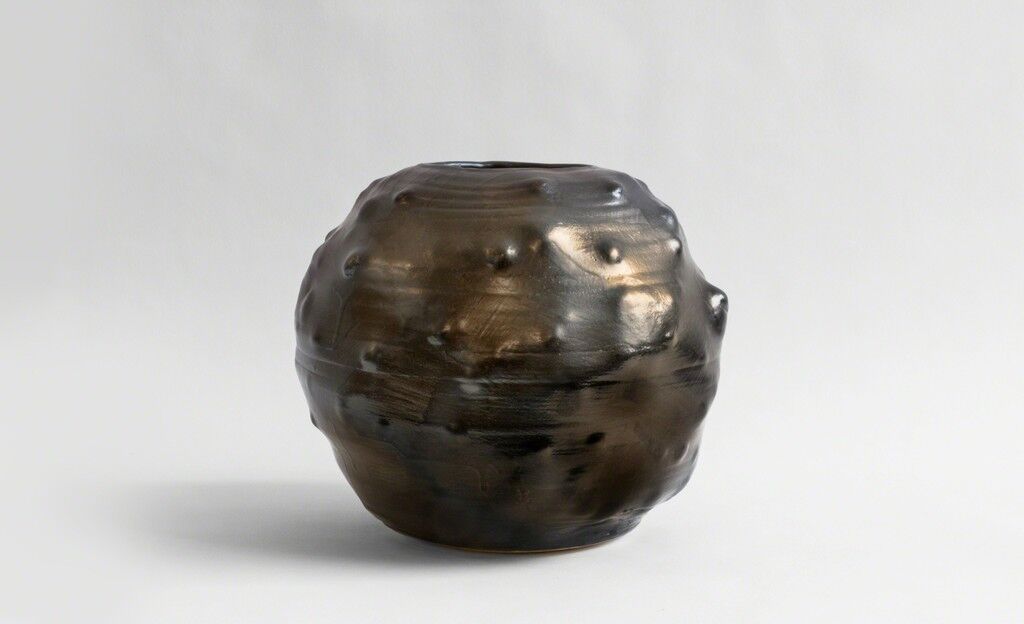 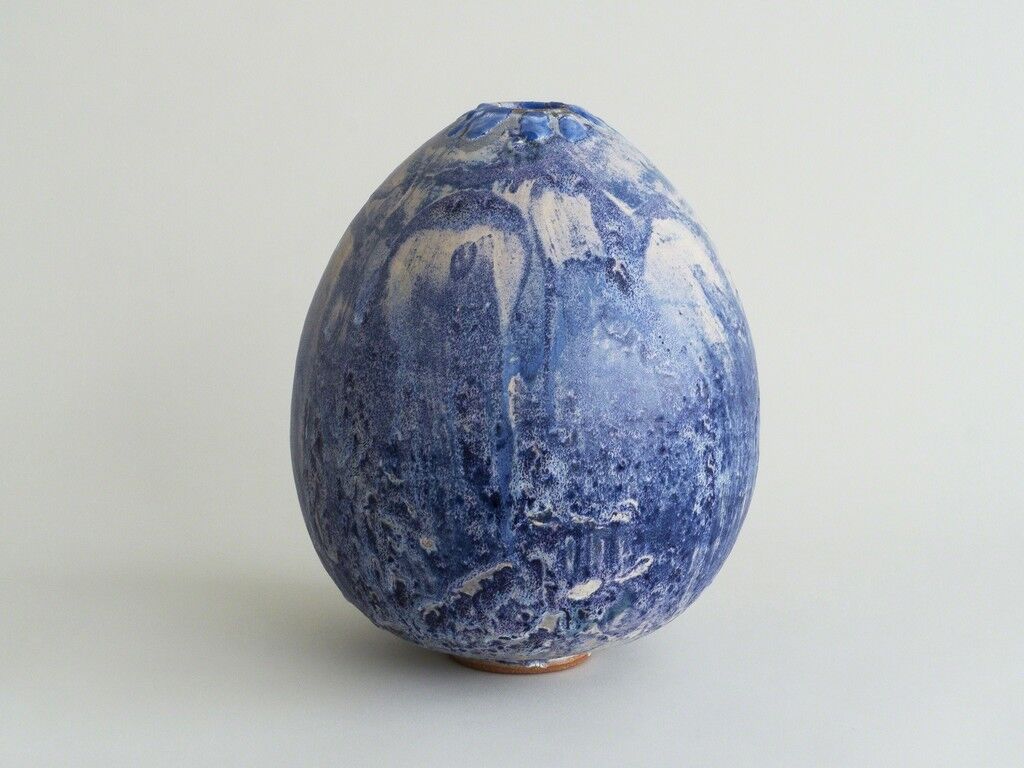 Adam Silverman
ASMI20, 2014
Edward Cella Art and Architecture
Working out of L.A., Adam Silverman got his start in architecture, followed by a nine-year stint in fashion, before making the transition to pottery in 2002. For Silverman, pottery has been but a hobby since high school, which he continually practiced on the side of his other careers before making the full-time switch. Inspired by a wide array of creatives, from
Le Corbusier
and
Noguchi
to
Miró
and
Louise Nevelson
, Silverman channels what he calls “abstract, but warm” forms, shaping minimal pots with intricate glazes reminiscent of those found in Japanese ceramics; using brushes and his hands, Silverman transforms the otherwise simple clay pots into mesmerizing vessels that bear an exquisite, almost molten appearance. In September 2013, Rizzoli Press published a monograph of his work, titled “Adam Silverman Ceramics.”

on view at Johnson Trading Gallery 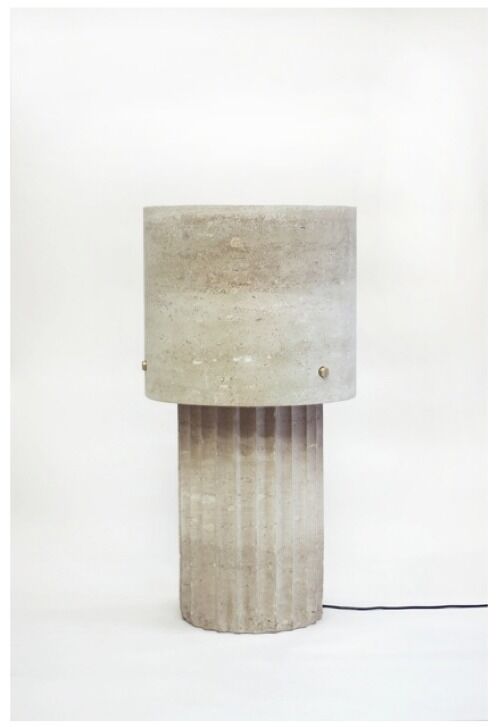 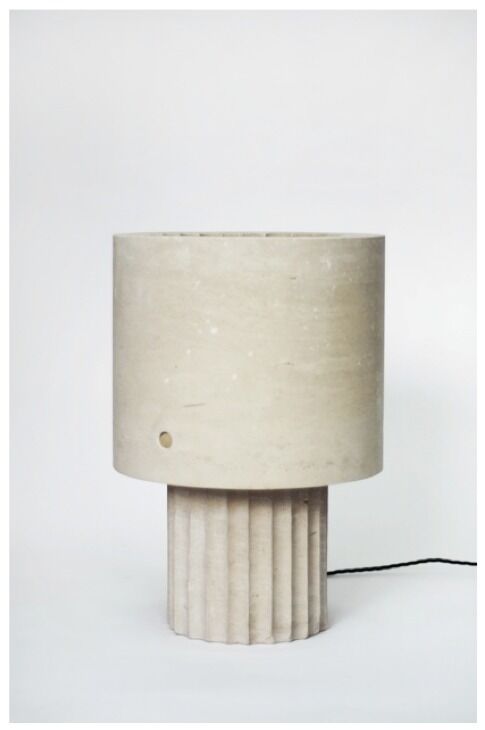 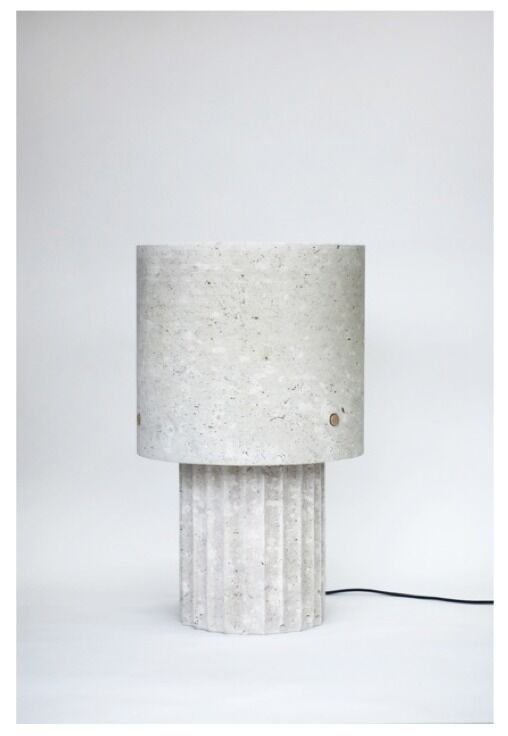 Max Lamb
Medium Portland Limestone Lamp, 2014
Johnson Trading Gallery
Born in Cornwall, England, Max Lamb became fascinated by the landscape and its natural materials at an early age. His contemporary designs draw upon these materials, mimicking their properties even when crafted from such artificial materials as plastic-coated polystyrene. Lamb investigates the intersection of industrial and handmade processes; he casts pewter stools in molds he digs into the sand on the beach, excavates chairs from blocks of polystyrene, and casts fine bone chinaware from plaster molds carved with traditional masonry tools. Lamb was the subject of two exhibitions during the London Design Festival in September; earlier this year he designed an Opening Ceremony pop-up shop in Shoreditch.

on view at The Journal Gallery 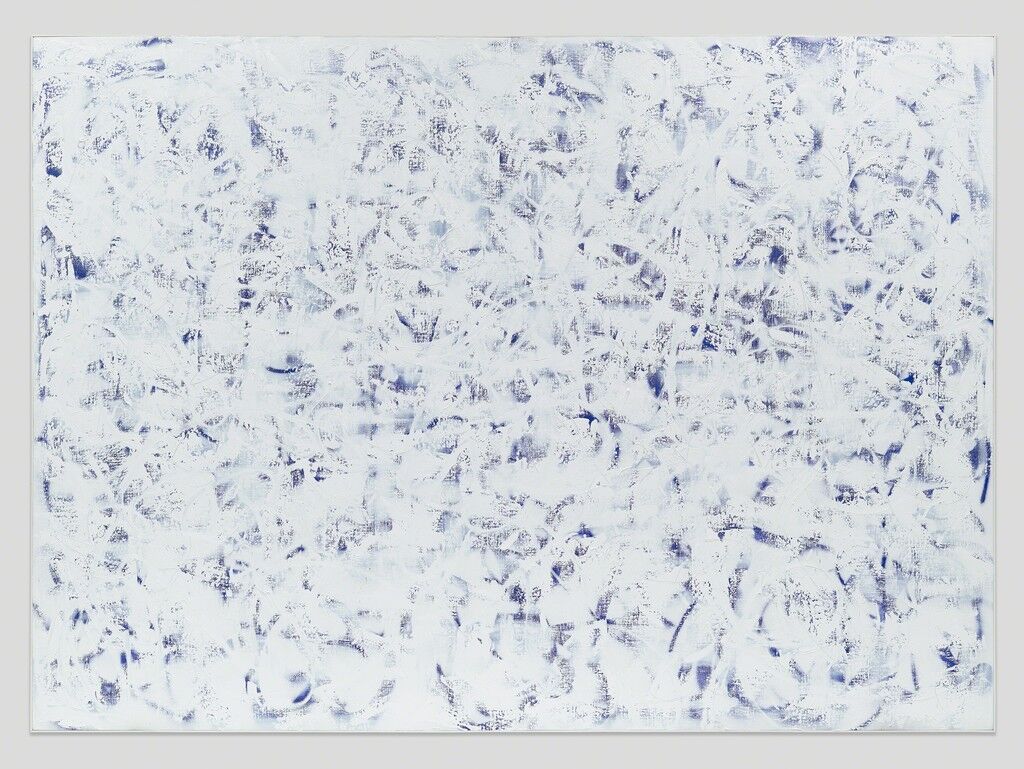 Chris Succo
THE RIFF, 2014
The Journal Gallery
Having recently set up a studio in Brooklyn to produce work for The Journal Gallery, Chris Succo is making art that ranges from monochromatic oil and lacquer paintings on canvas to standalone steel sculptures. Growing up, Succo’s first love was music, as he shared with Artsy this past October; not until a friend discovered his work and prompted him to go to art school did Succo adopt art as a career. His first solo show was in 2007, and since then Succo’s career has shot off—he now stands as one of the most in-demand contemporary artists. Succo recently showed in solo exhibitions at New York galleries RH Contemporary and Robert Blumenthal, and in his native Germany (Succo was born in Düsseldorf, where he primarily lives and works) at DUVE Berlin. And he doesn’t show any signs of slowing down, with three group shows in Cologne, Naples, and London slated for this December and January 2015, followed by three more solo shows in 2015, at Almine Rech in March, The Journal Gallery in May, and Rod Barton in the fall.

on view at Foxy Production 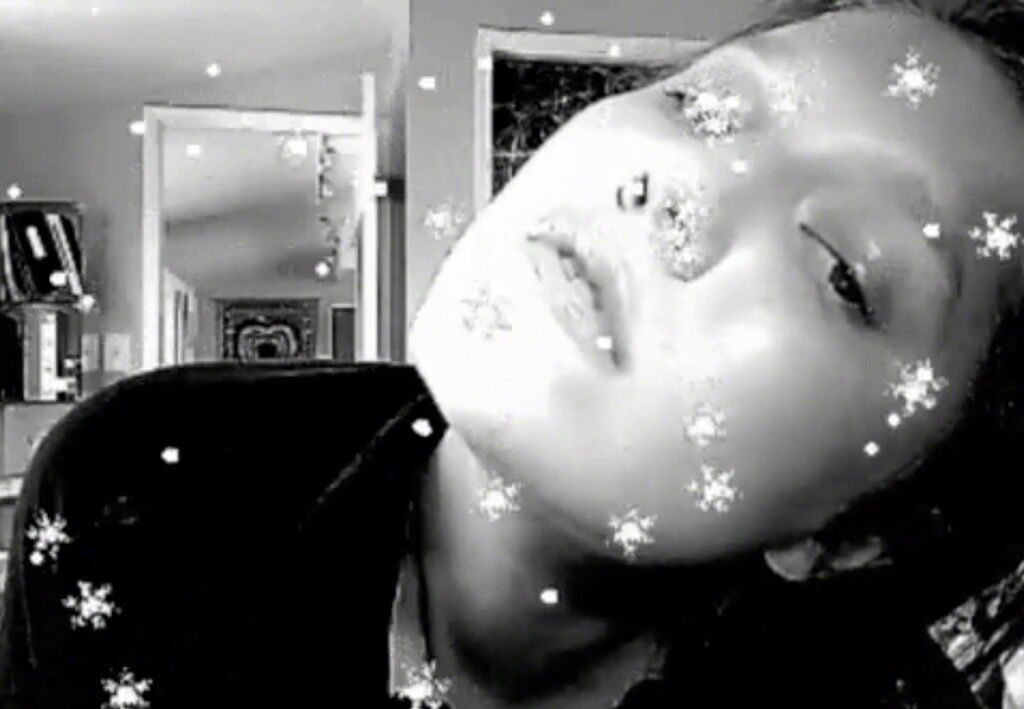 Petra Cortright
swnoflaek2, 2008
Foxy Production
“Internet artist” Petra Cortright creates videos recorded on her webcam, animated gifs, and digital paintings (printed onto aluminium sheets, silk, or flags), all that riff on popular internet culture. Cortright got her start on YouTube, posting videos of herself in her room doing mundane activities like scrolling through internet pages or dancing, adding in stock filters and clip art. Beyond the world of jpegs, gifs, and viral videos, Cortright has been featured in the 2009 Venice Biennale, the 2010 San José Biennial, and the 2013 Biennale de Lyon, as well as by Rhizome. In fall 2013, Frieze Film and the Experimental Media and Performing Arts Center co-commissioned the young artist to create four video works for Frieze London, setting her up in a studio at EMPAC for what was her first-ever residency; the resulting work, “Bridal Shower” (2013), a self-portrait of sorts that was also an experiment in production and broadcasting, aired on British television. Cortright’s recent digital paintings, which she creates in Photoshop, have been featured in auctions at Sotheby’s New York, Phillips New York, and Phillips London, at times selling for $40 thousand or more.

on view at Charlie James Gallery

Born to immigrant parents in Southern California, painter Ramiro Gomez draws inspiration from his personal history. After dropping out of art school, Gomez took a job as a live-in-nanny for a wealthy family in the Hollywood Hills—an experience which continues to directly inform his career as an artist. While living in this unfamiliar house, where he did not feel comfortable to bring his own art supplies, Gomez began creating acrylic paintings on the pages of magazines, adding in domestic workers to the glossy photographs of extravagant interiors and houses. Emphasizing the lack of credit given to these individuals, Gomez never paints distinct faces onto the nameless laborers, which illustrates the vast chasm that exists between these employees and their employers. Gomez also reinvents iconic
Hockney
works, upending Hockney’s bright, idyllic scenes of 1960s L.A. with pool cleaners and landscapers. Since 2013, Gomez has exhibited at art fairs across the country with Charlie James Gallery, including the Dallas Art Fair and ArtMRKT San Francisco.

on view at Art Mûr 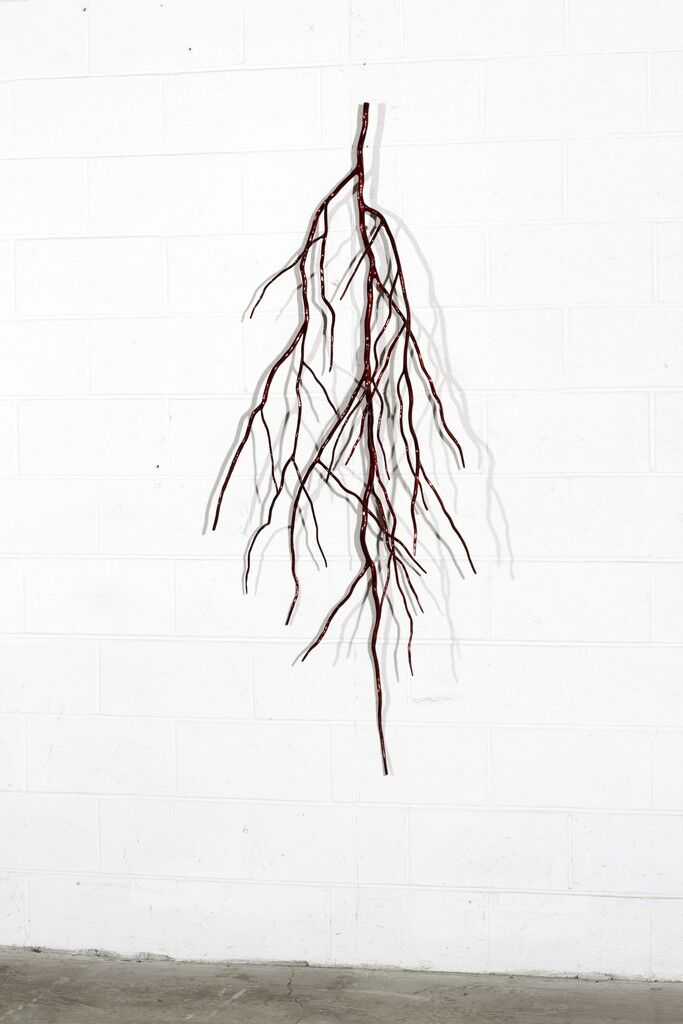 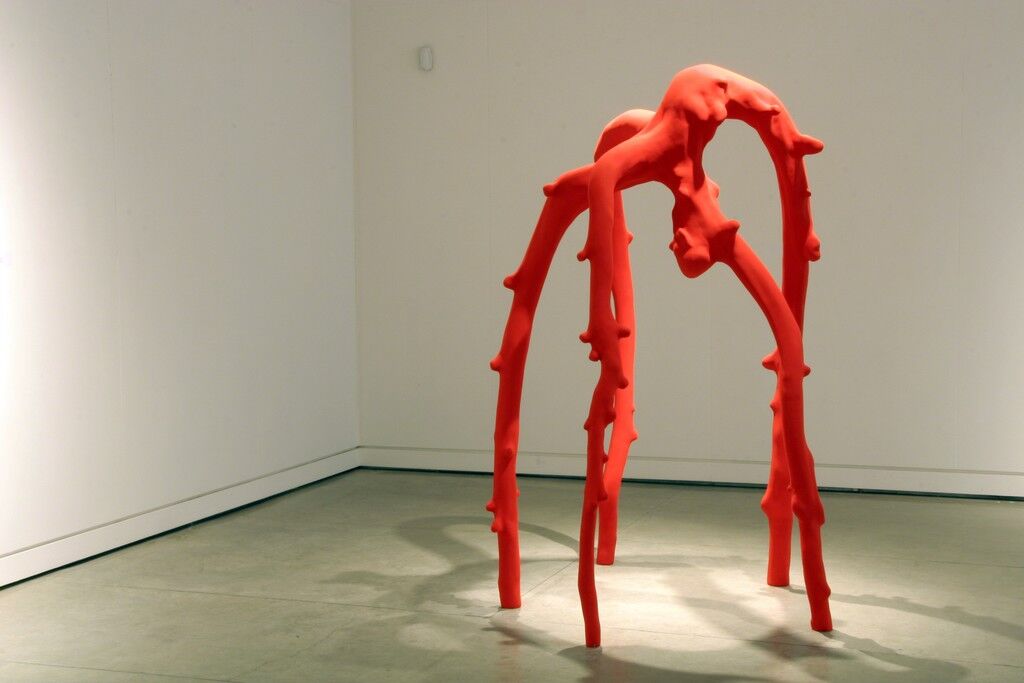 Shayne Dark
Critical Mass, 2009
Art Mûr
Canadian Shayne Dark creates sculptural installations that incorporate organic and industrial elements; his works feel as if they might be found growing in the wild, were it not for their electric colors. Radiantly pigmented bundles of sticks, hanging branches, and skinny trees are forged from steel and accented with powder-coated polyester paint. Dark also works in wood, painting sculptures that twist off the wall or stand freely with the same vibrant colors. As well as showing in Art Mûr’s booth, Dark is participating in PULSE Projects; his large scale work, “Tangle Wood,” a jumbled pile of logs painted a rich
Klein
-like blue, stands in reference to the log driving that took place on North American rivers in the early 20th century. Based in Ontario, he has exhibited extensively in Canada; in 2015, Dark will begin a residency at the Brooklyn Botanical Garden, New York.
—Kate Haveles
Explore Art Basel in Miami Beach, Design Miami/, NADA Miami Beach, and PULSE Miami Beach on Artsy.
Related Stories