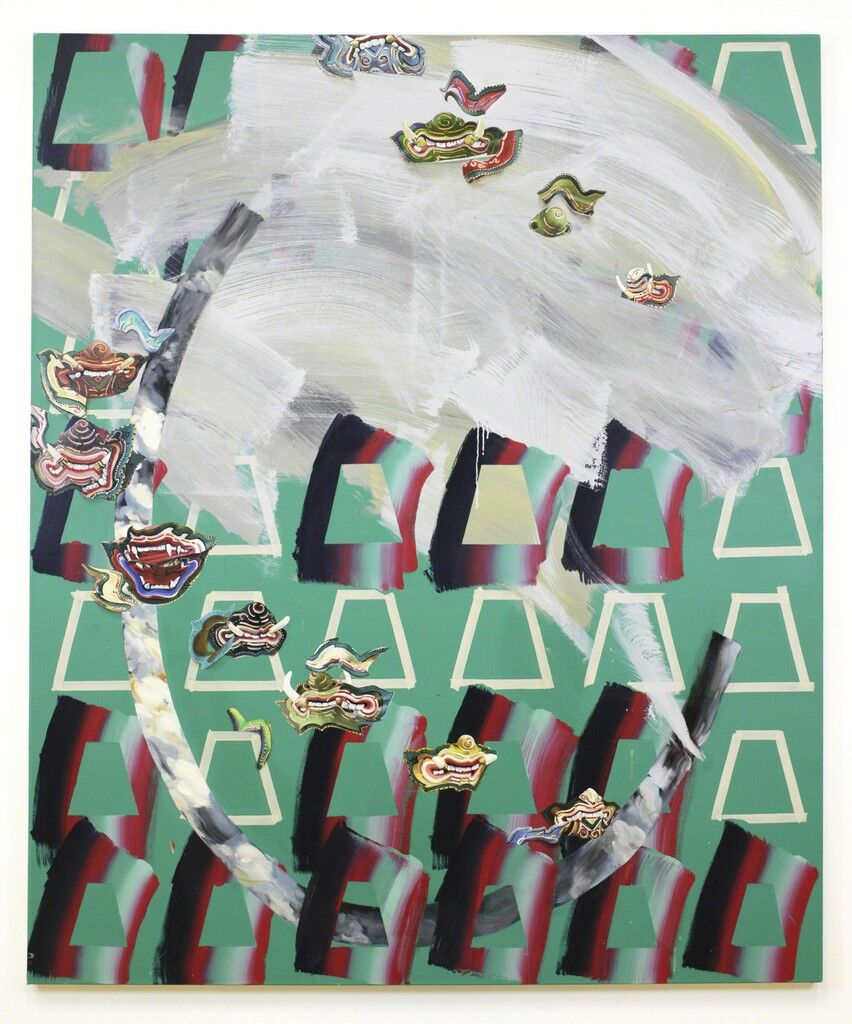 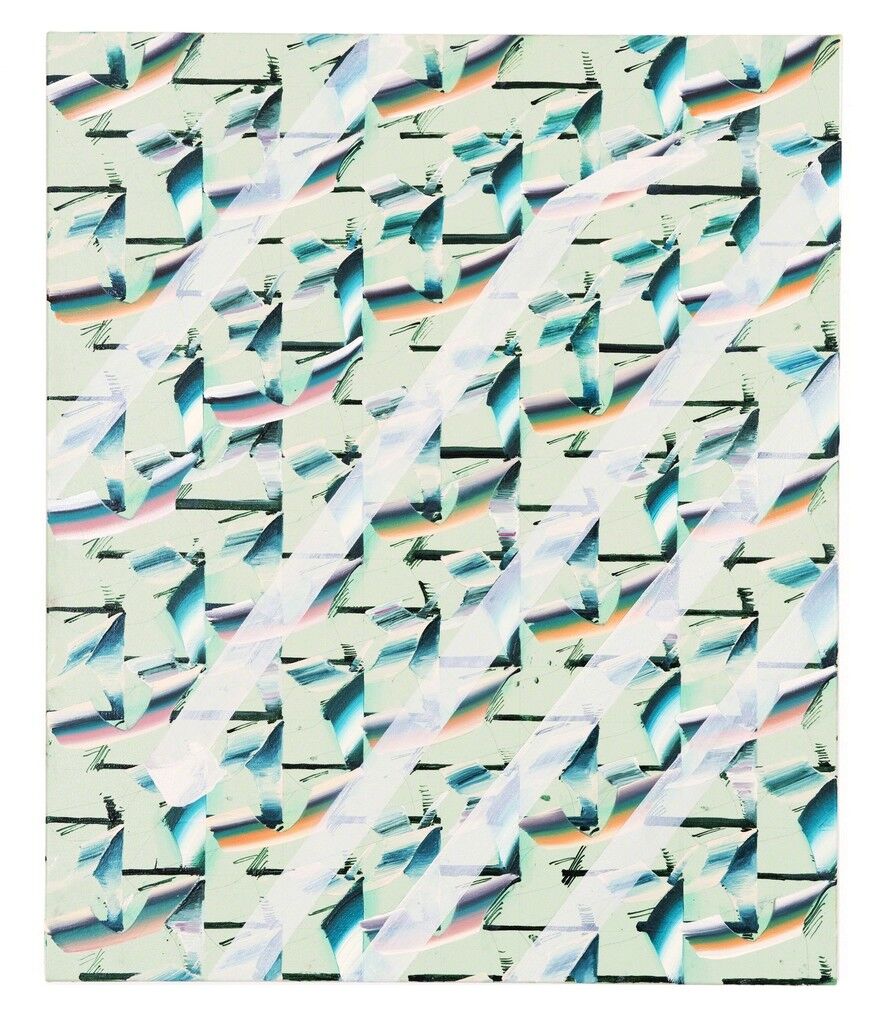 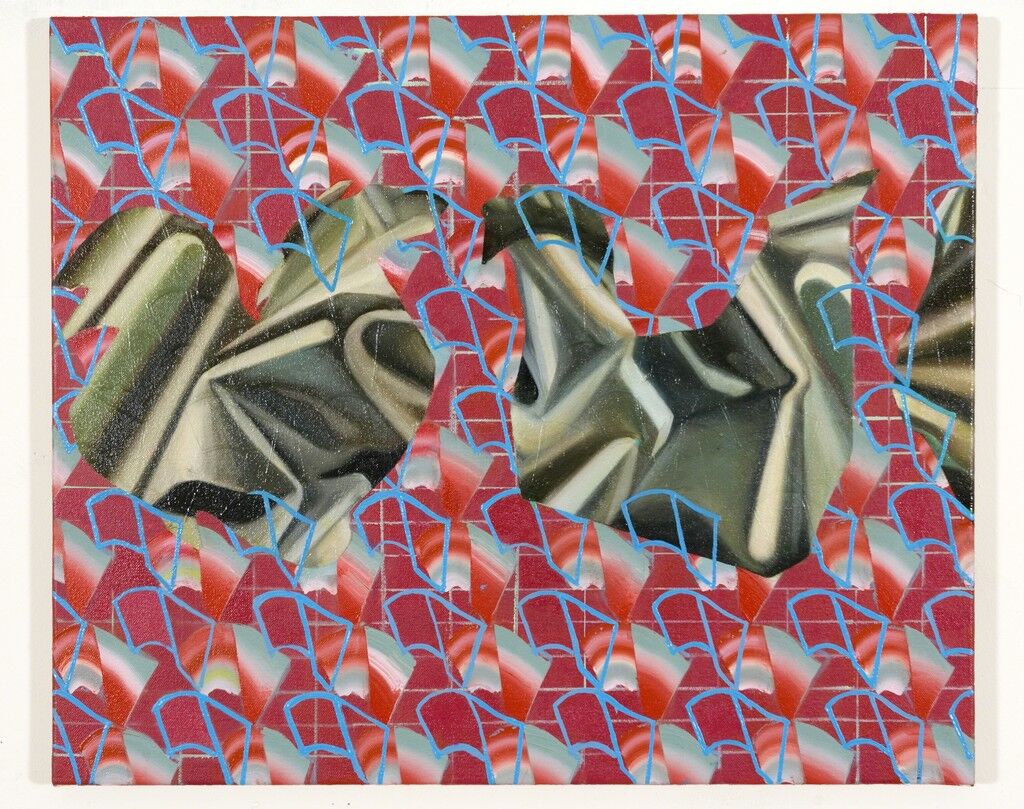 Vivien Zhang
Untitled (Red Roosters), 2014
Rook & Raven
Zhang’s work juxtaposes a
patterned ground
with moments of painterly expression. When not regulated by pattern, her marks are
gestural
and florid, resembling artists such as
Tomory Dodge
. Many of her paintings echo one another. As she describes, “I wanted to see if I could develop a self-referential process in my way of working, so that the motifs in my work would evolve to inform the motif used in the next work and so on, denying the possibility of impetuous external references coming into play.” In works such as Folded Stencil (Generosity) (2013) and Untitled (2014), respectively, Zhang’s colorful, repeating grounds are highly regulated and the painterly perturbances are minimal. 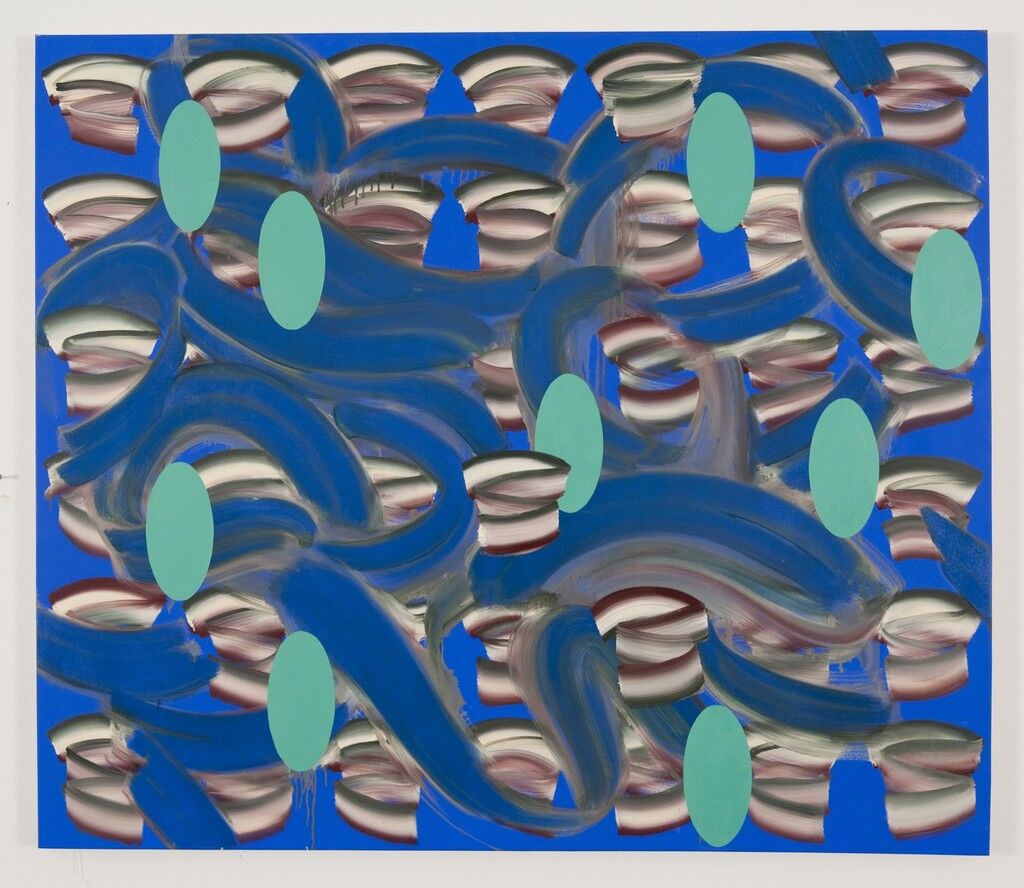 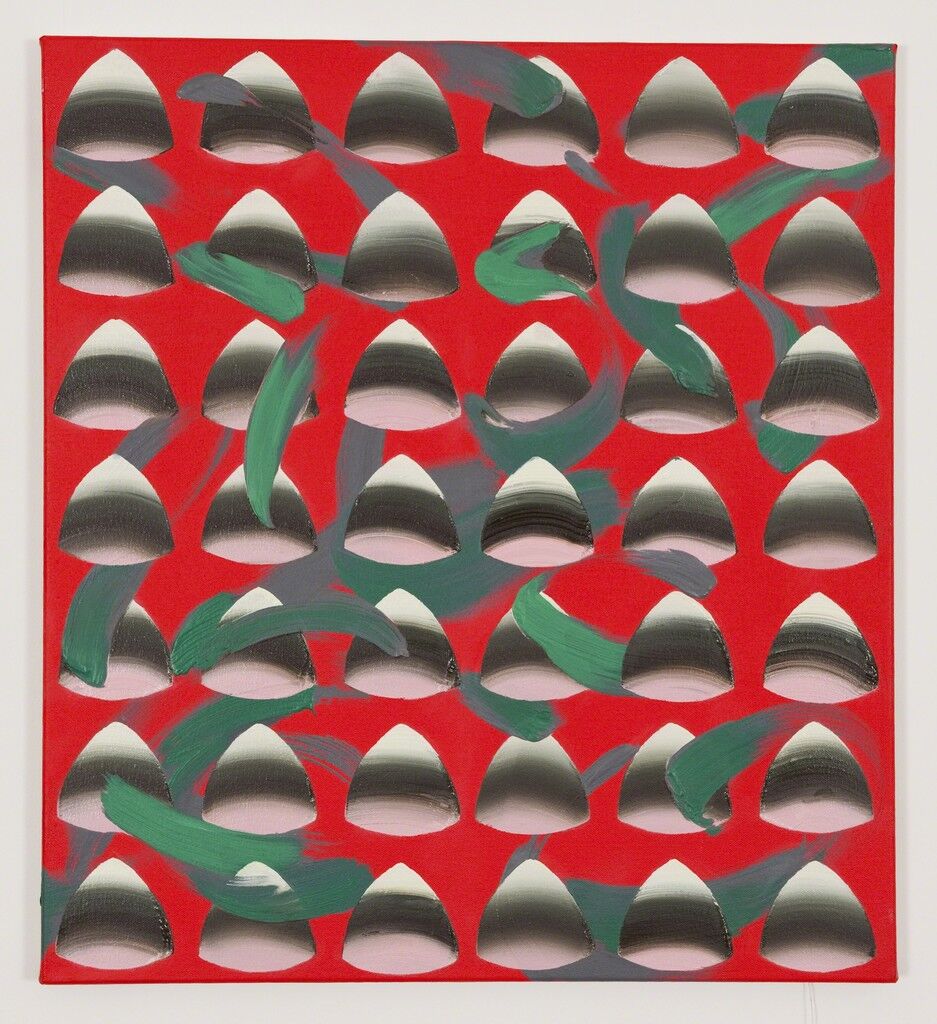 Vivien Zhang
Order, Oscillation and Pretence Gesture (Shape Green), 2013
Rook & Raven
Often, the images interpenetrate, as in Stencil Negative (Not Dragons Not) (2014), in which a repeated pattern is sometimes covered over by brushy white paint. In other places on the same canvas the patterns sit on top confusing the order of execution. 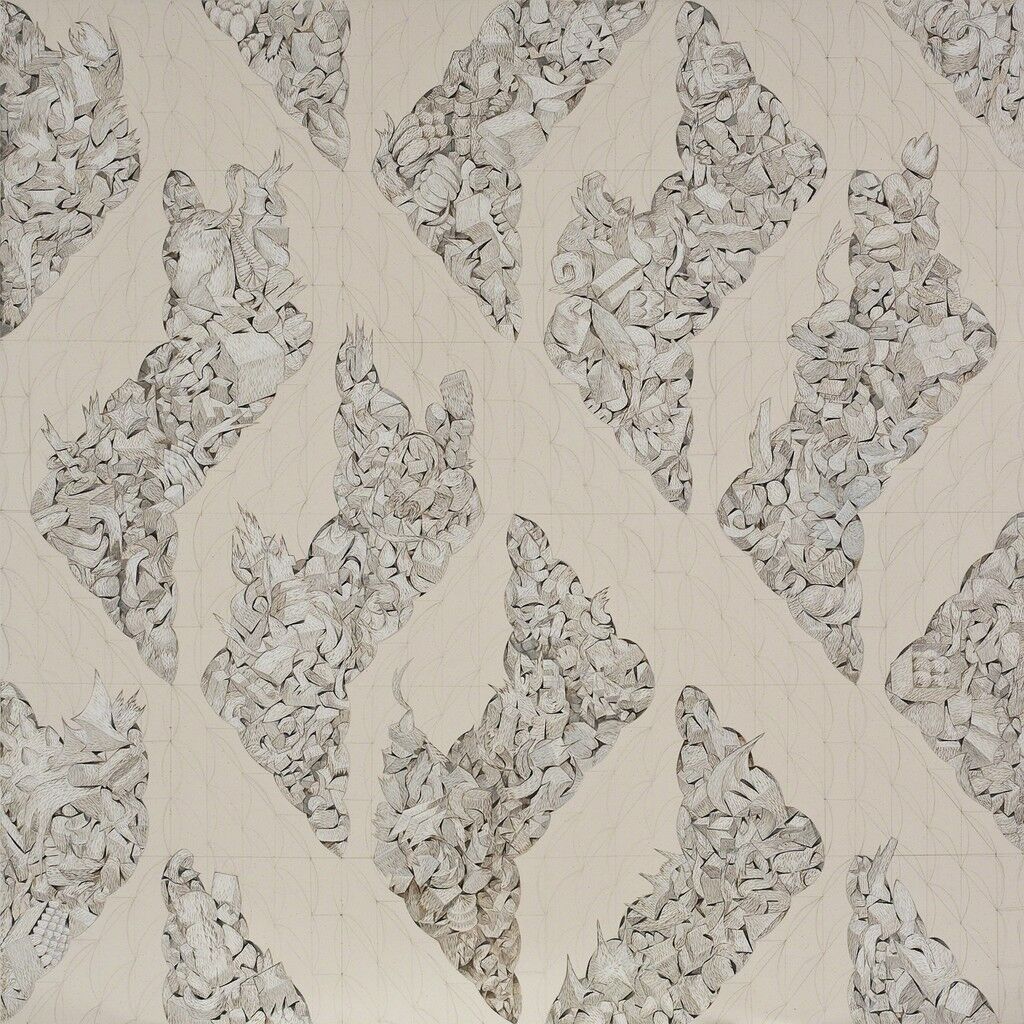 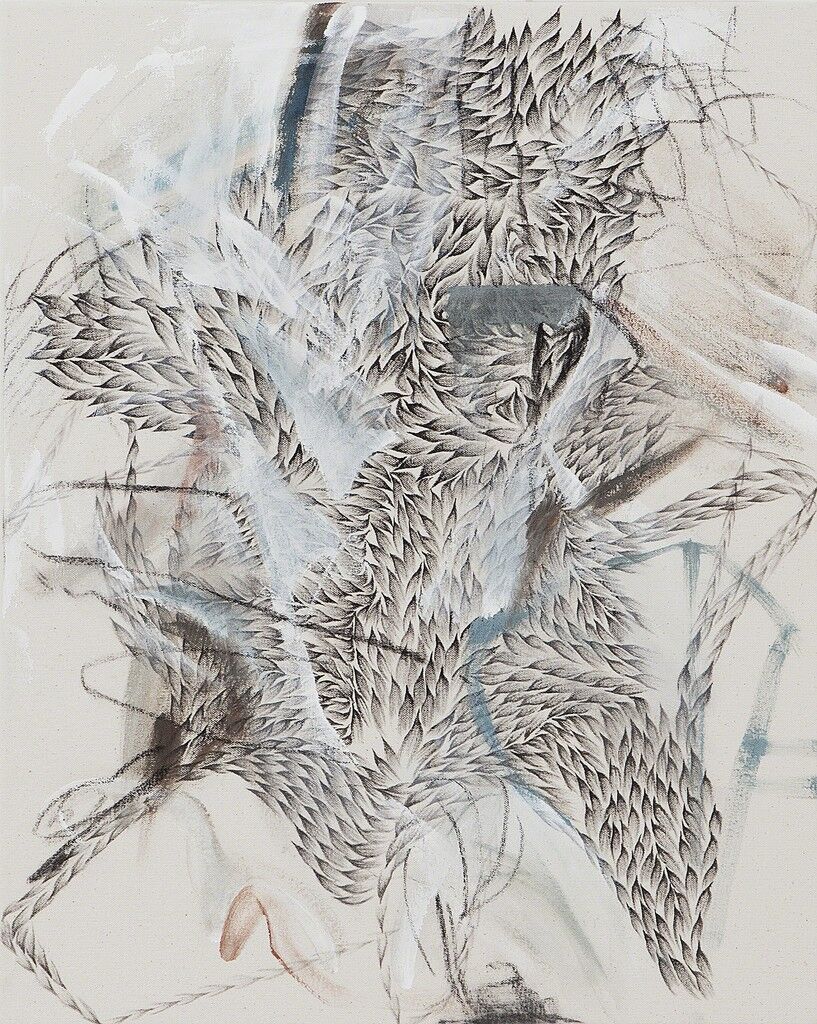 Yun-Kyung Jeong
Pond, 2014
Rook & Raven
Advertisement
Jeong’s work is densely layered, often using patterns to build larger forms, or using small images accumulated into repeating shapes, similar to the work of
Garth Weiser
. Many of the patterns she uses—composed in black paint on unprimed canvas—resemble the stylized brushwork of East Asian
ink-and-wash
paintings. The Mass II and Volume I (both 2012) employ tiled bushy forms, like snakeskin, plant matter, or fire. Similar patterns are built up in sepia tones, with blue accents throughout the image. Watery brushmarks appear in places, as in the lower left of Volume 1, but quickly either evaporate or develop into more concrete forms. In some works, such as Axonometric Jungle 3 (2011), those concrete passages include geometric forms, both in small-scale building blocks, and in the larger pattern to which they contribute—here, parallel bands of a Z-like shape slanting from upper left to bottom right. 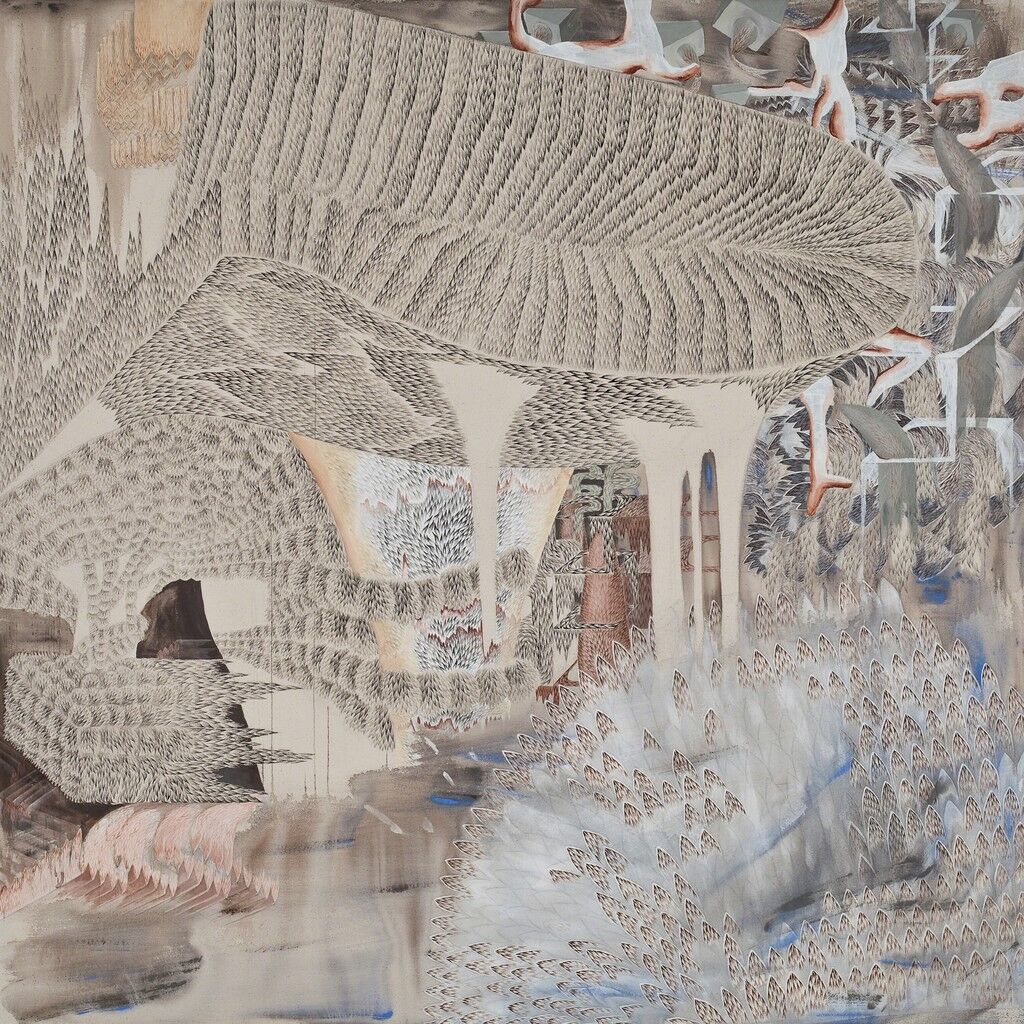 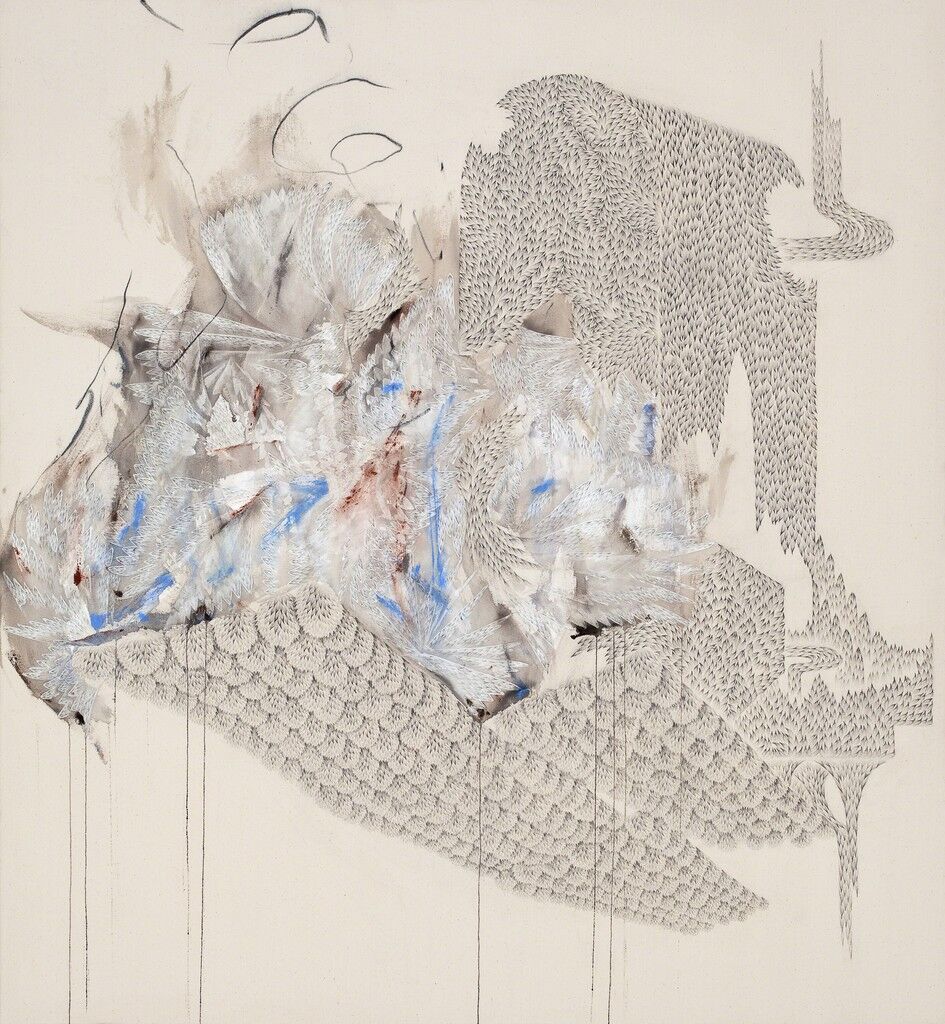