Up and Coming: A Young Curator Shows Us How Design Can Transform Space—Starting with His Own 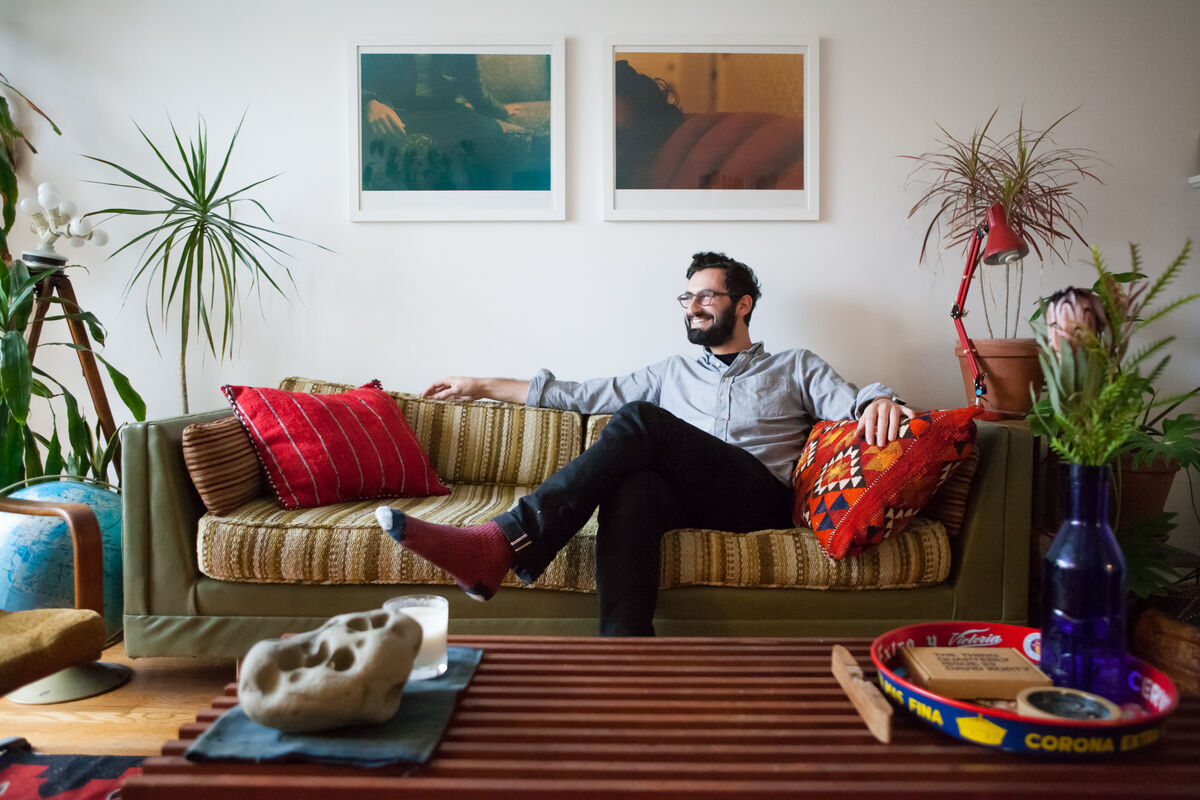 “I picked this up at a flea market in the mountain pass of Les Mosses, in the Swiss Alps,” says Joseph Becker, San Francisco Museum of Modern Art’s Assistant Curator of Architecture and Design, holding an oblong wooden object that resembles a peg with three precise wedges sliced from one tapering end to the other. “It’s called a cleave.” Becker is giving me a tour of his Bernal Heights home, pointing to favorite objects as he goes. Playing show and tell with a curator of modern design, you might expect them to break out the modernist rarities, not a century-old tool used to split willow switches for basket weaving. But a moment later Becker is holding another unconventional design curio: a 2,000-year-old cutting tool. 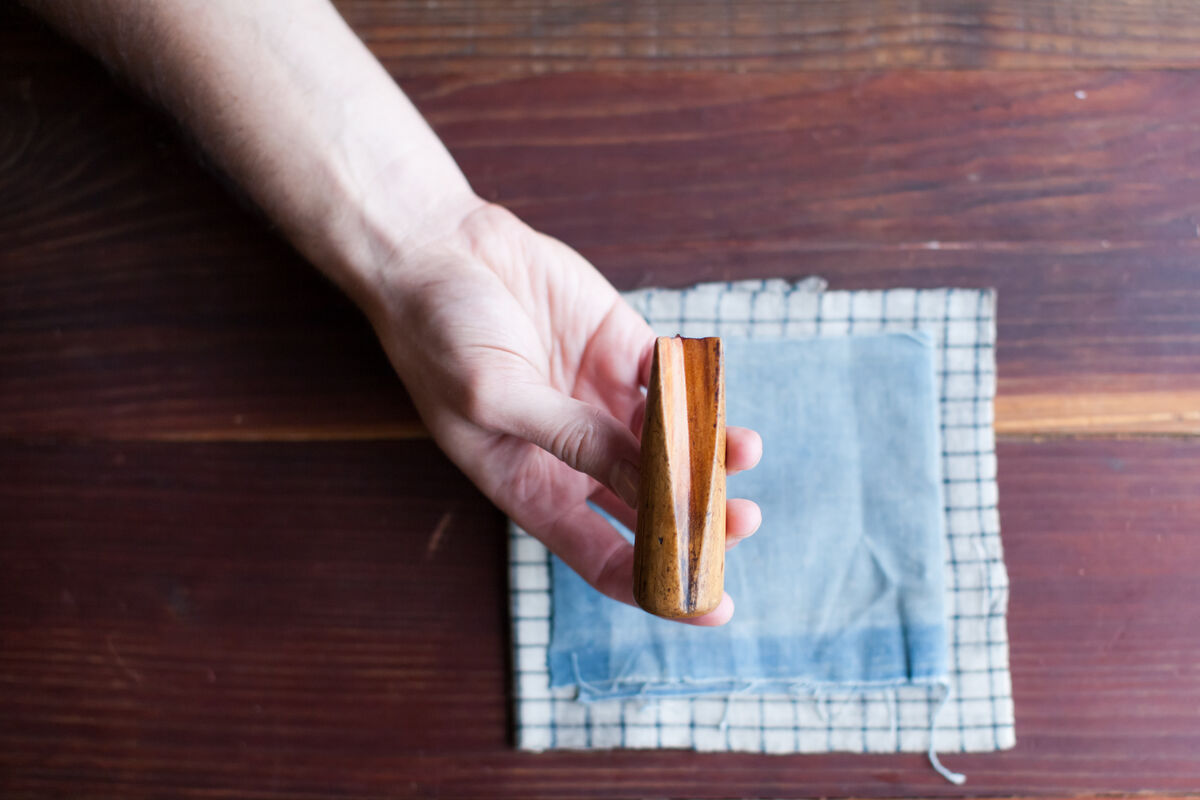 A minimalist Becker is not—his taste skews more toward the well selected bric-a-brac that characterized the
Eameses
’ and
Girard
’s own interiors than to the austere—and his design interests are as wide-ranging and inclusive as his personal collections. A conversation with Becker can skip from the reductive wood furniture of
Donald Judd
, to the spatial investigations of Lebbeus Woods, to the state of Bay Area design, which he’s keen to champion. To wit, Becker is currently researching Lawrence Halprin’s landscape designs for Sea Ranch, the Sonoma County community whose planning and architecture exemplified the 1960s imperative for ecologically sensitive design. “There’s a tremendous design force in San Francisco,” says Becker, acknowledging the energy and impact of the region’s tech industry, but also giving a nod to a wider range of local design practice. When asked what he’s excited to see at FOG Design+Art, Becker is quick to give a shout-out to Mission District-based publishing company, Colpa Press, who will be featuring risograph prints created in collaboration with designer and Memphis Group alumna
Nathalie du Pasquier
. 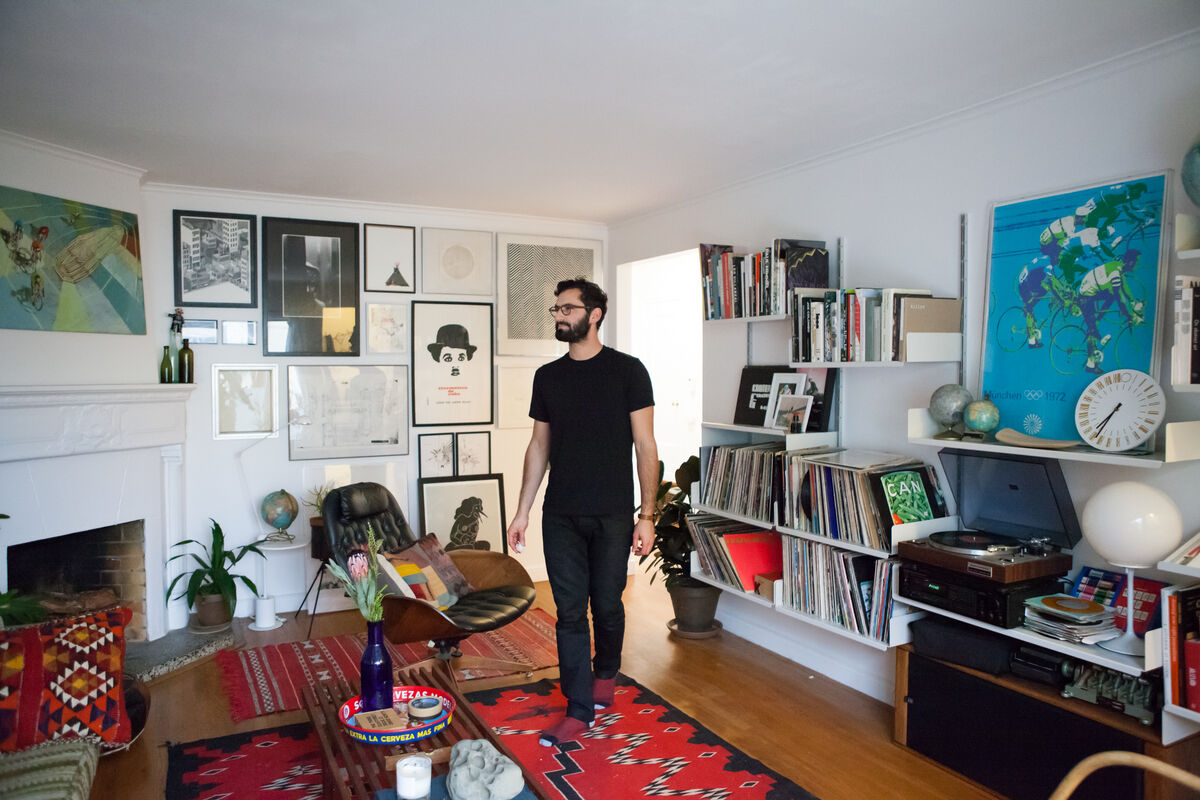 Advertisement
Returning for its second edition, FOG will once again bring the best in modern and contemporary design and art to San Francisco, with proceeds from the preview gala and fair benefiting SFMOMA’s exhibitions and educational programs. Besides gathering exhibitors from across the country, FOG will host lectures and discussions with creative luminaries (Becker is set to moderate a morning panel on January 15 that includes Heath Ceramics creative director Catherine Bailey, and renowned industrial designer
Yves Béhar
, among others). As the museum undergoes a major expansion that has meant mitigating the temporary shutting of its doors with a smartly planned series of off-site exhibitions and other projects, FOG will support and energize the Bay Area’s creative community. Becker is a fan. “FOG’s a wonderful event. Having a fair in San Francisco, there’s incredible potential to educate and stimulate [local] design.” 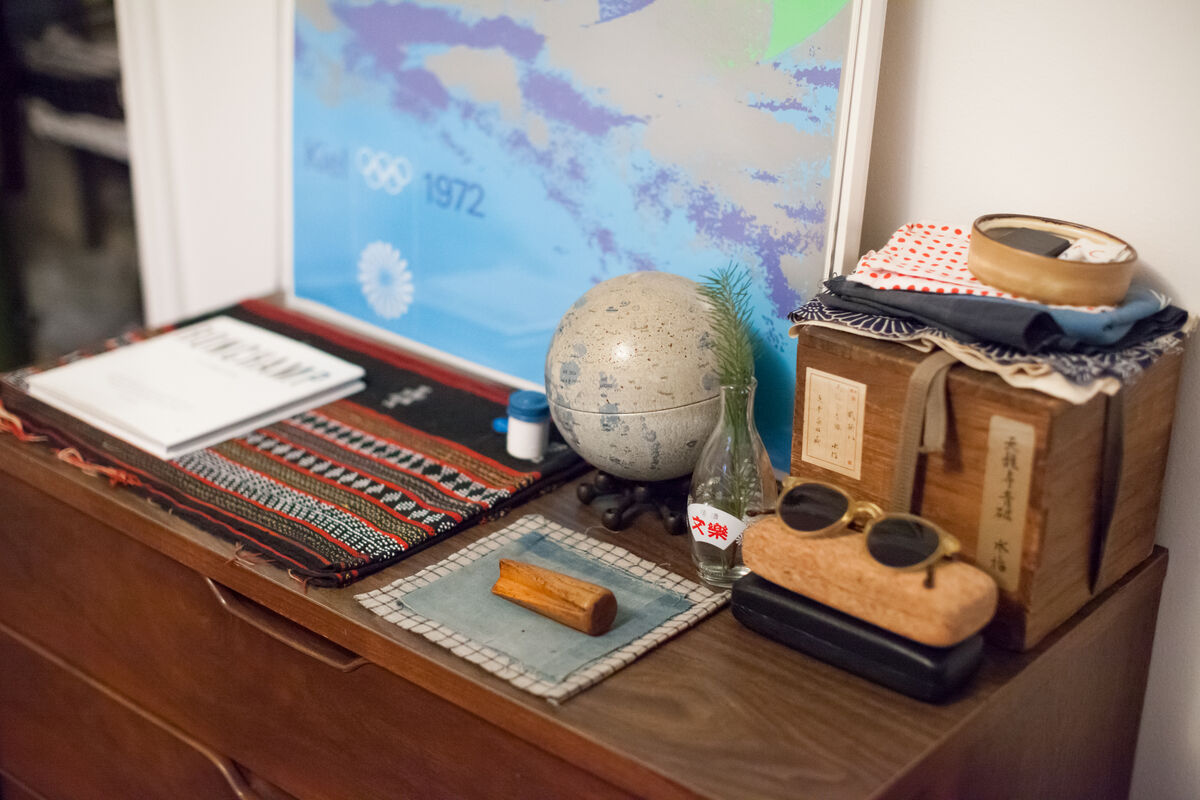 Asked about the department of architecture and design’s inaugural programming for the new SFMOMA, which will reopen in 2016, Becker will only say he’s in the midst of planning. Looking for a hint in his past efforts is a blind alley: since joining the museum in 2007, his exhibitions have focused on German graphic designer Otl Aicher’s suite of posters and other ephemera for the 1972 Olympic Games in Munich, the relationship of design to the body, and theoretical investigations of architectural space, among other subjects. He also organized a Dieter Rams show in 2011, a reminder of which is the designer’s iconic 606 shelving system for Vitsœ, which anchors his living room. Becker is an intelligent and flexible curator, capable of tackling career retrospectives and conceptually complex exhibitions with equal brilliance and creativity. He sees the role of the design curator, in particular, as one that encompasses a wider array of material and subjects than his counterparts in other fields might be responsible for. “All curators of contemporary media have to be aware of technology. [But] as a design curator, you end up focusing on things as diverse as industrial design, furniture design, digital design, graphic design, architecture...to help people understand the nuances across these diverse disciplines, regardless of whether [the designs] are made of wood or lines of code.” His track record with the museum—and his idiosyncratic home collection—suggests he’s up to the task.
Becker’s expansive view of design might be traced to his first awareness of the field, which came as a teenager while visiting a
Verner Panton
retrospective at Design Museum London. Best known for his eponymous Panton Chair, a curving and cantilevered plastic stacking chair, he also devised entire spaces, defining the
psychedelic
Pop
interior of the Barbarella era with shag-carpeted floors that swelled into seating, ceilings encrusted with stalactite-like lighting, and biomorphic sculptural furniture towers that coaxed users to sprawl and lounge. Walking through the exhibition was an epiphanic experience for Becker, who saw that colors, textiles, and forms could radically transform space. “I realized design was a type of practice,” says Becker, “and I understood the breadth of what design could do.” 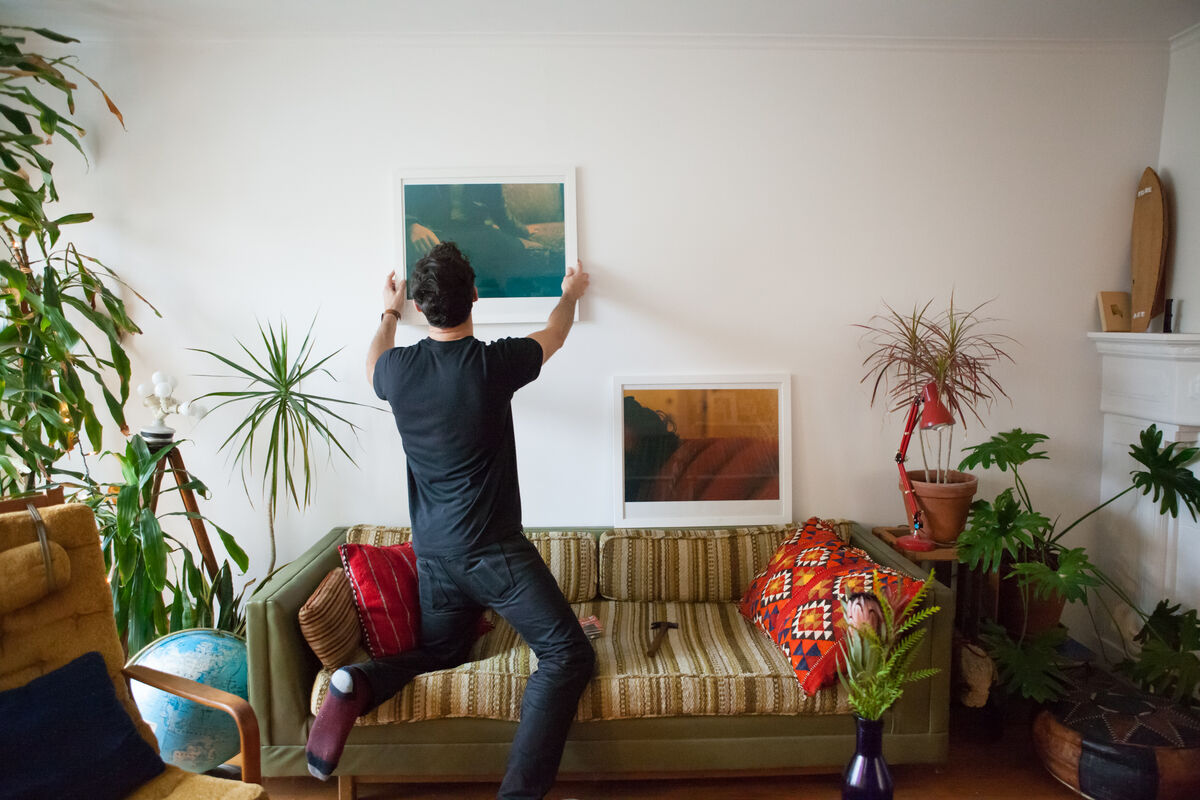 A few years later, Becker began studying industrial design at California College of the Arts, soon switching to architecture. Despite earning both his bachelor’s and master’s degrees in Architecture, he hadn’t planned to become a practicing architect. Instead, he saw the discipline as a chance to feed his polymath tendencies: “[Architecture was] a more holistic way to look at multiple design fields at once,” he explains, “to test the waters of multiple types of design practice.” He recognized that the ability to communicate ideas, verbally and graphically, is integral to good design across disciplines. Becker found that by studying architecture he was not only becoming fluent in different design languages—unsurprisingly, he had a sideline co-founding a boutique graphic design firm while in school—but that he was increasingly fascinated by the concepts that drove the designs. “I was finding a way to focus on the conceptual idea, my ideas and the ideas of others. I’m interested in the experimental practitioners that never built buildings and the conceptual projects that forced you to consider what the role of architecture is. [Projects] to stimulate the imagination,” he says, before lifting another of his prized objects from its shelf: a small, Soviet-era globe sitting atop a tiny radio; you rotate the world to tune stations. 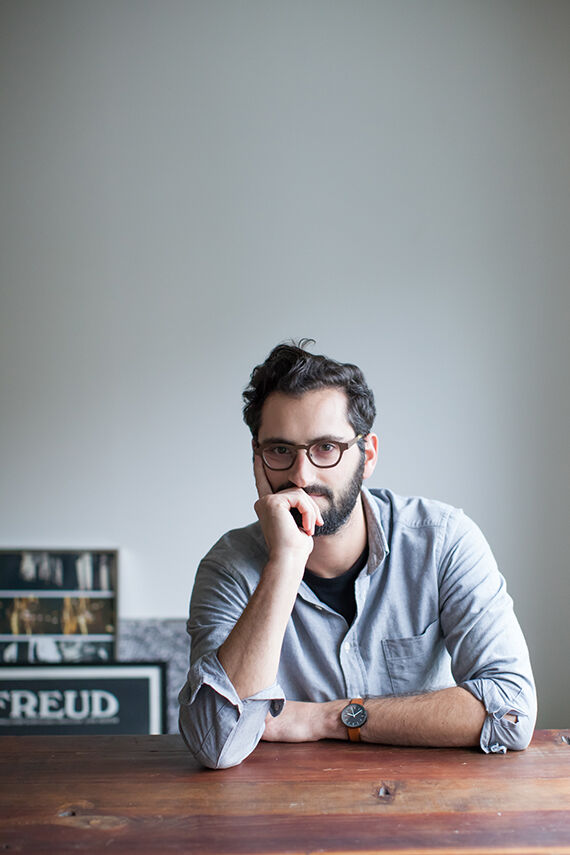