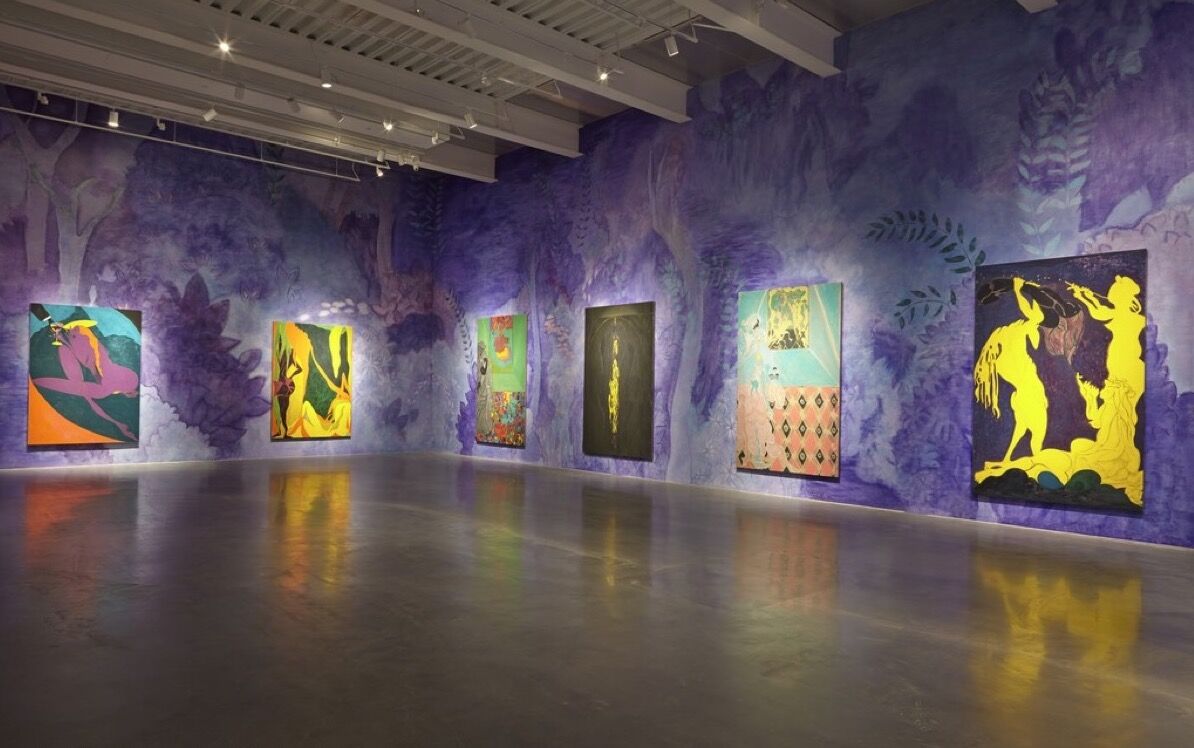 Not since Chris Ofili’s Brooklyn Museum scandal of 1999, when the Manchester-born YBA unveiled an 8-foot black Madonna, christened with elephant dung (Rudy Giuliani called it “sick”) has the artist’s name been tossed around so frequently in the New York art world. And today, on a rainy Tuesday on the first floor of the city’s New Museum, I meet assistant curator Margot Norton in a quiet lobby, soon to be swarming with critics and fans when Ofili’s exhibition opens on the 29th. For most, we’re awaiting what promises to be the biggest North American show of Ofili’s 20-year career; for Norton, an up-and-coming curator with a charmed tutelage (having worked for Francesco Bonami when he curated the 2010 Whitney Biennial and regularly with New Museum director Massimiliano Gioni), the show is just one of the ambitious projects she’s taken on in her three years at the museum—in every one of them, working intimately with artists and challenging what an exhibition or museum can be. 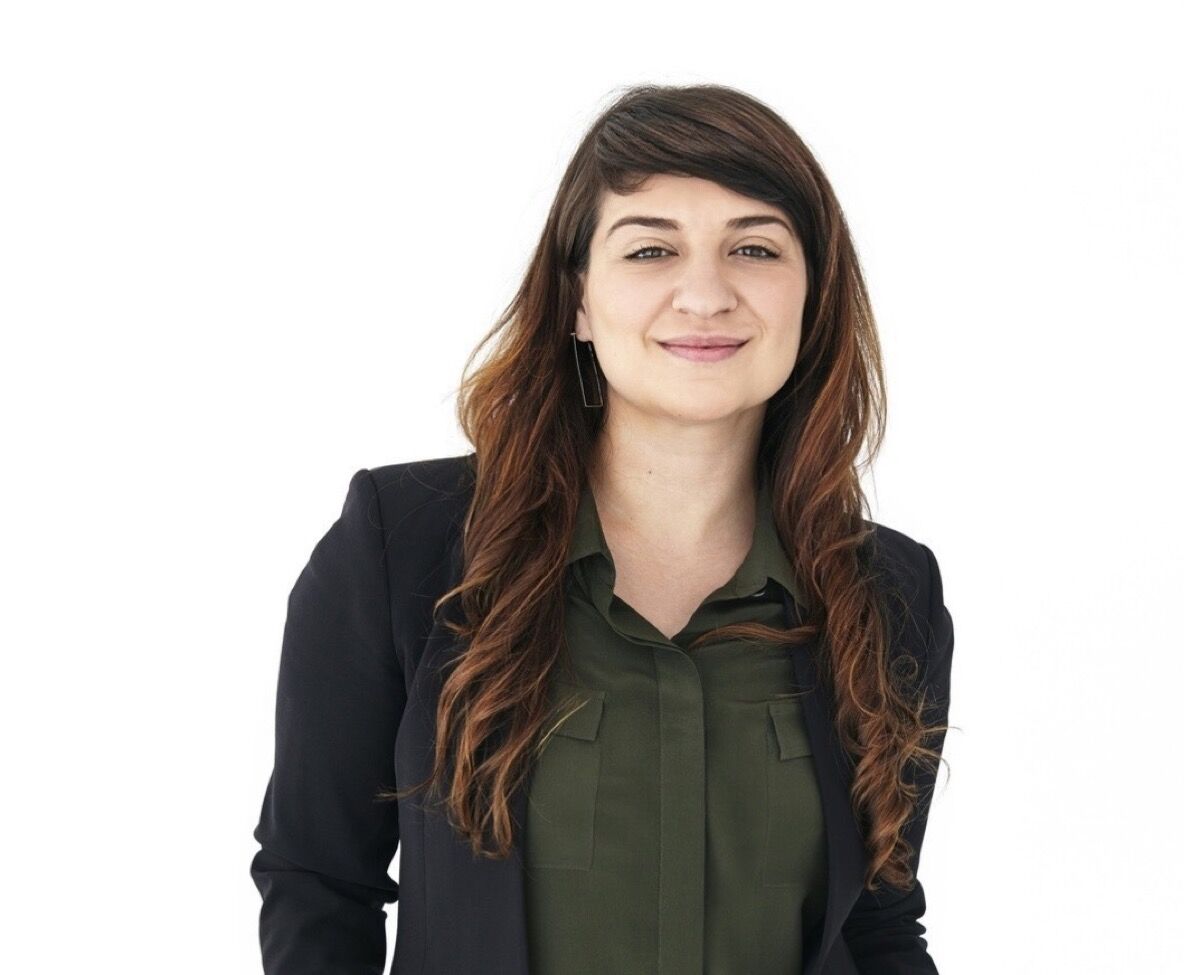 Long before Norton joined the New Museum, and before her sojourn at the Whitney, attending Columbia grad school, or working at Chelsea’s Taxter & Spengemann Gallery, the now 32-year-old curator spent her childhood visiting galleries and museums in New York. It isn’t surprising, then, to learn that “NYC 1993: Experimental Jet Set, Trash and No Star,” the New Museum’s large-scale exhibition in 2013 that captured a specific moment of the ’90s art milieu, is among her most memorable experiences as a curator. “That show was special because I was coming of age in 1993,” she says. “It was incredible to work with a lot of the artists that I remember from that time, when I was first going to see exhibitions in New York.”
The following year (last spring) Norton had the opportunity to collaborate with French artist Laure Prouvost—fresh from her 2013 Turner Prize win—on the artist’s first solo exhibition in the United States, a sculpture, film, and video installation that carved the museum’s lobby gallery into five different sections. “There were some ideas that she brought to the table that I initially thought were challenging, but also expanded what I would have done otherwise,” Norton says, recalling how the pair motivated one another—each appreciative of the other’s ideas. “Working with great artists in that way is a special opportunity for a curator to have.” 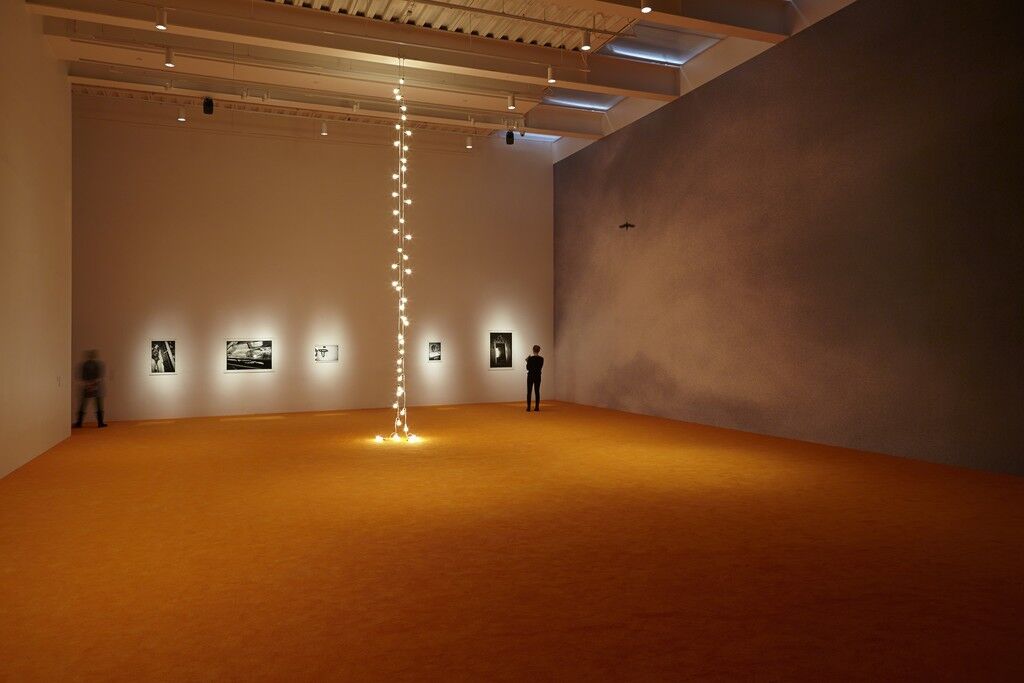 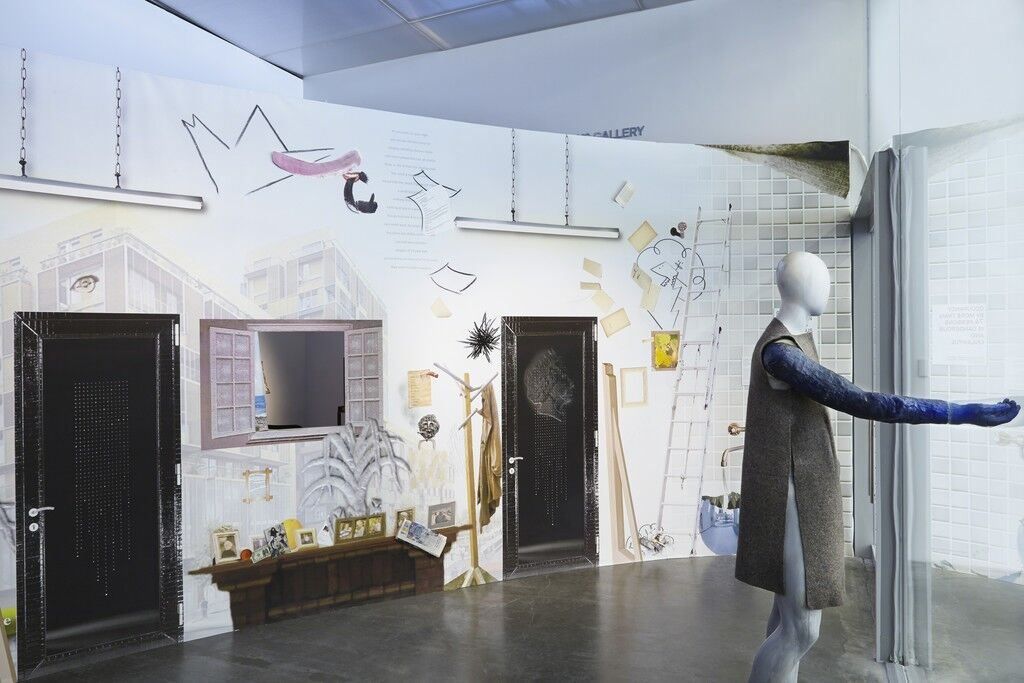 Laure Prouvost
Installation view, "Laure Prouvost: For Forgetting” at the New Museum, 2014
New Museum
Advertisement
More recently, Norton worked closely with Ragnar Kjartansson on his New Museum exhibition, “Me, My Mother, My Father, and I,” where she played “band mom” to the Icelandic artist’s cohort of wandering musicians. “She is a cool cat and she does it with ease,” Kjartansson told me, admitting that with Norton, work feels more like play (even citing a research trip to Iceland, where she visualized the show while helping his family bake for Christmas). “Her vision is simply making everything happen so an artwork’s potential can be turned up to the max,” he said. “All [of] the discussions were just about how the institution could do its best.”
“I think it’s a good example of working on an exhibition that expands what a museum can be,” Norton says of Kjartansson’s show, a “living artwork” that filled the museum’s galleries with guitar-playing troubadours, lulling visitors into a state where they’d stay for hours on end (a rarity these days, Norton notes). No doubt she’s absorbed this desire for disruption working under the museum’s artistic director, Massimiliano Gioni. “I think one of the things that I really admire about him is that he is interested in work that is thought-provoking, and [in] exhibitions that challenge what is expected and redefine and expand upon what an exhibition or museum can do,” she says candidly. 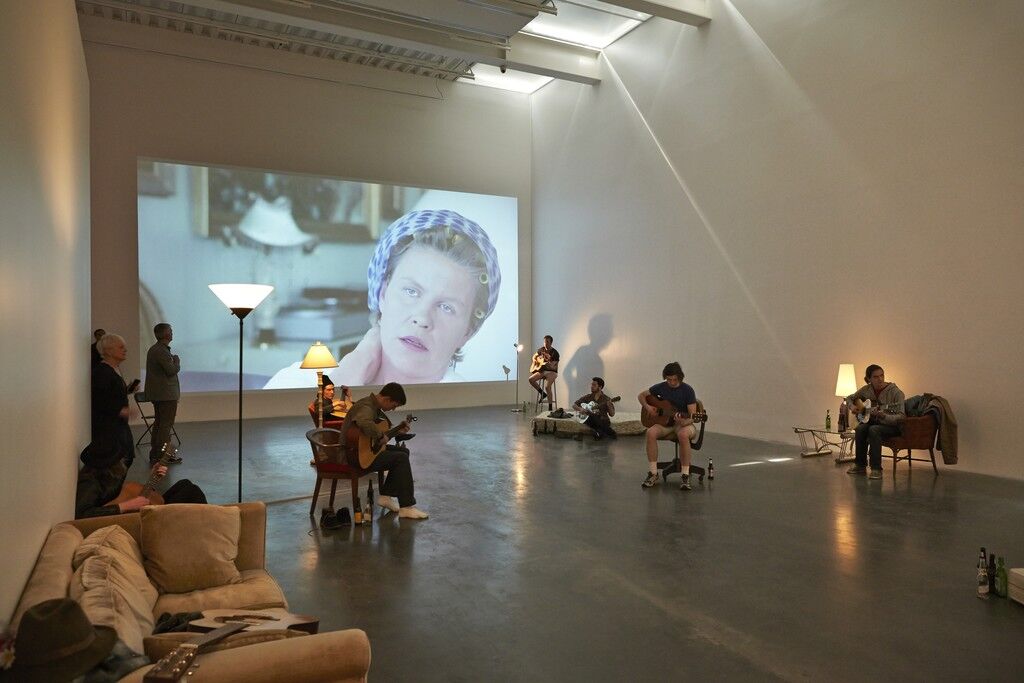 Ragnar Kjartansson
Installation view, "Ragnar Kjartansson: Me, My Mother, My Father, and I,” New Museum, 2014
New Museum
For the New Museum’s next feat, Gioni, curator Gary Carrion-Murayari, and Norton have been tasked with presenting Ofili’s first major solo exhibition in the United States, “Night and Day.” Though Ofili represented Britain at the 50th Venice Biennale and had a major retrospective at Tate Britain in 2010, save for his “Afro Muses” show at the Studio Museum in Harlem in 2005, the artist has not had the exposure in New York that he deserves. “Most people in New York remember him from the controversy surrounding the ‘Sensation’ exhibition at the Brooklyn Museum in 1999,” Norton says. “We thought that it was also important to show the impressive range of his work, from the work he’s more well known for—the extremely intricate and ornate paintings that he made in the ’90s—to the subtle blue paintings and vibrant and expressive recent paintings that he’s been [making] since his move to Trinidad in 2005.” 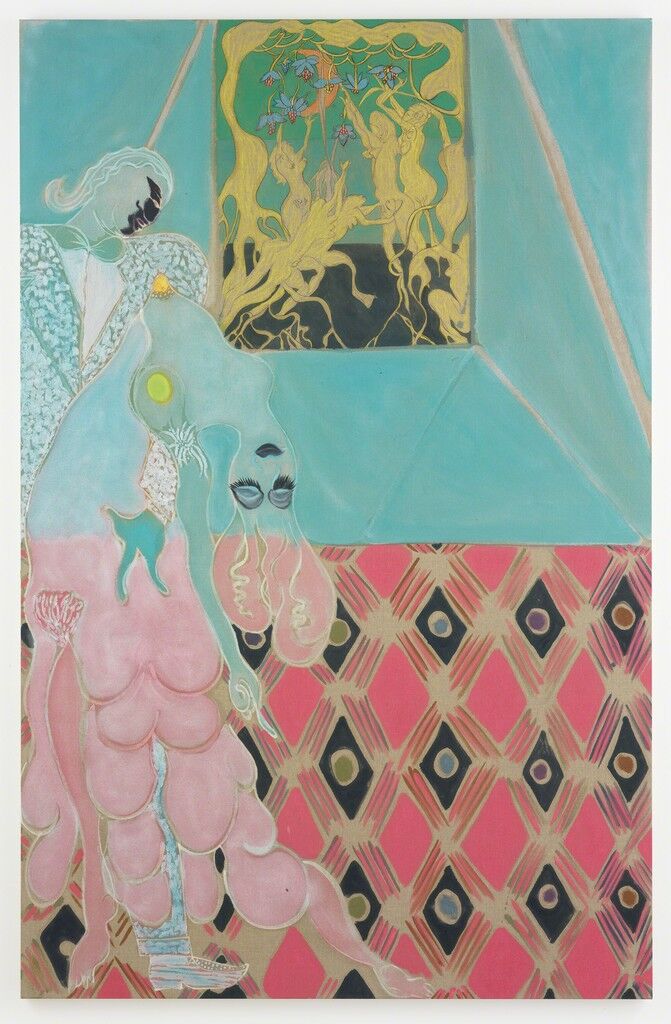 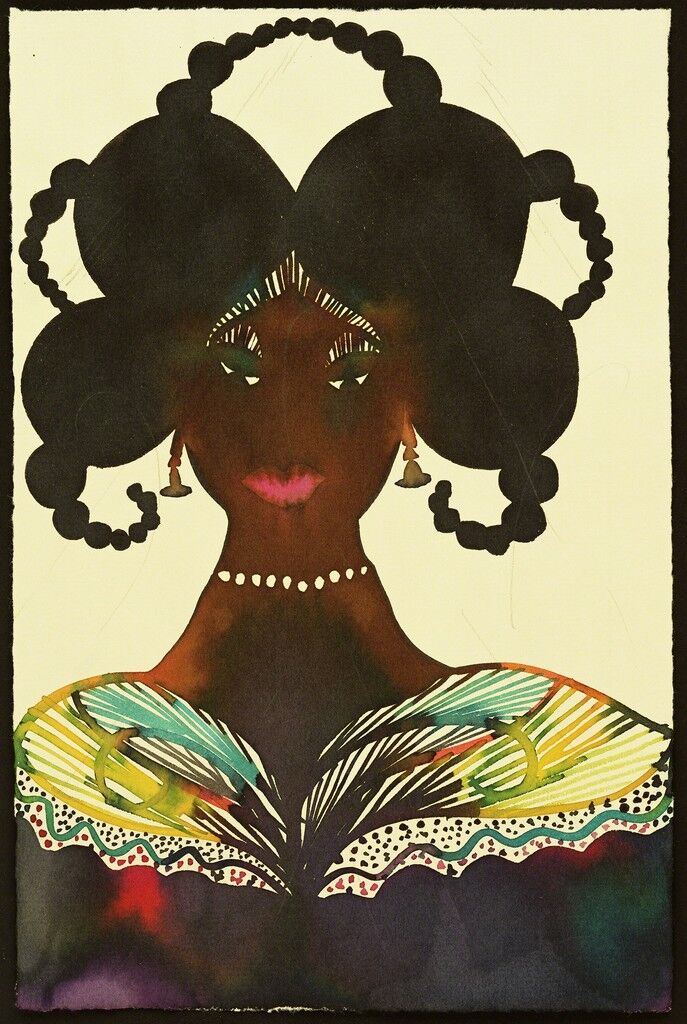 Chris Ofili
Untitled (Afromuse), 1995-2005
New Museum
The exhibition will be divided between two floors, and into specific environments designed by the artist, who Norton says has been back and forth between the museum and his home in Trinidad—and often chats via Skype. “He’s fantastic,” she says. “He is very thoughtful and has been intimately involved with working on the exhibition,” she adds, recalling their conversations around ways to manipulate the museum’s architecture to create environments for the works. The fourth floor, she says, will be painted as a dreamlike environment, evoking a scene from the 1947 film Black Narcissus, and filled with brightly colored paintings from Ofili’s Ovid-inspired “Metamorphoses” series, alongside brand new paintings. Just below, the third floor will be reborn as a “chapel-like” environment, filled with nine subtle, twilight-blue paintings originating from his “Blue Rider” series. “I think it will offer a quieter moment in the exhibition, and will force viewers to spend time with the paintings; and to see these subtleties emerge.”
“We are used to people not having patience...in museums, seeing something quickly, taking a snapshot of it with their phone and putting it on Instagram and that’s it,” Norton says. Like the Kjartansson exhibition, “Night and Day” will ask viewers to spend time with the work. And Norton herself will likely be caught lingering in the chapel-like room: “Many of these works I have never seen in person, and know that they will be completely different and much more complex than the images that we have seen through reproductions,” she says. But that is the gift (and the curse) of being a 21st-century curator—a role Norton is taking in stride. 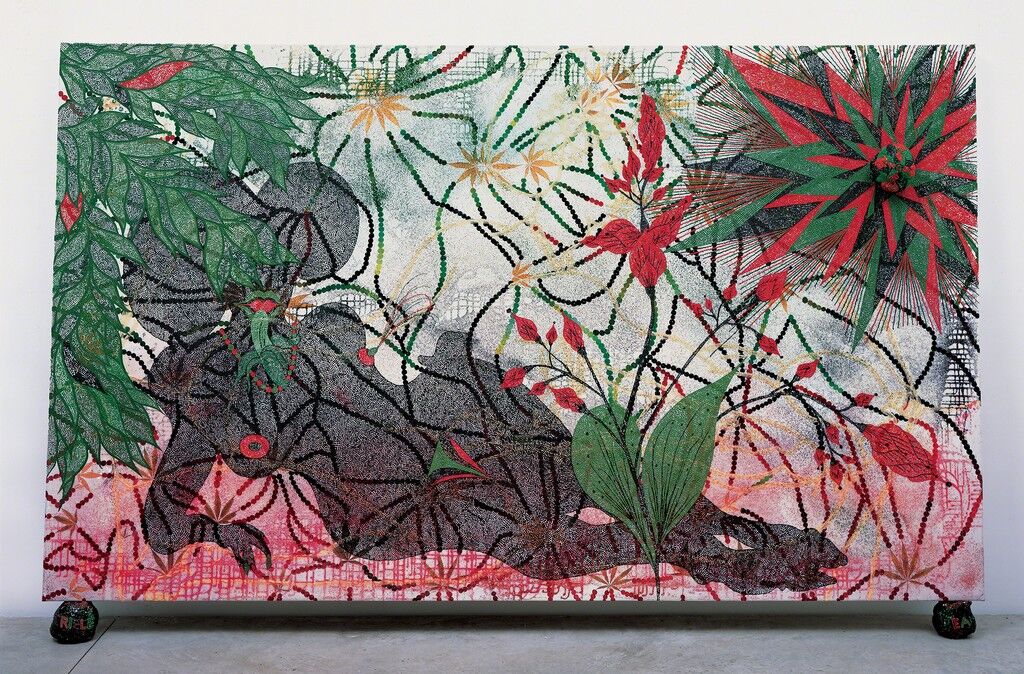