Up and Coming: One Man’s Trash is Ryan Foerster’s Treasure 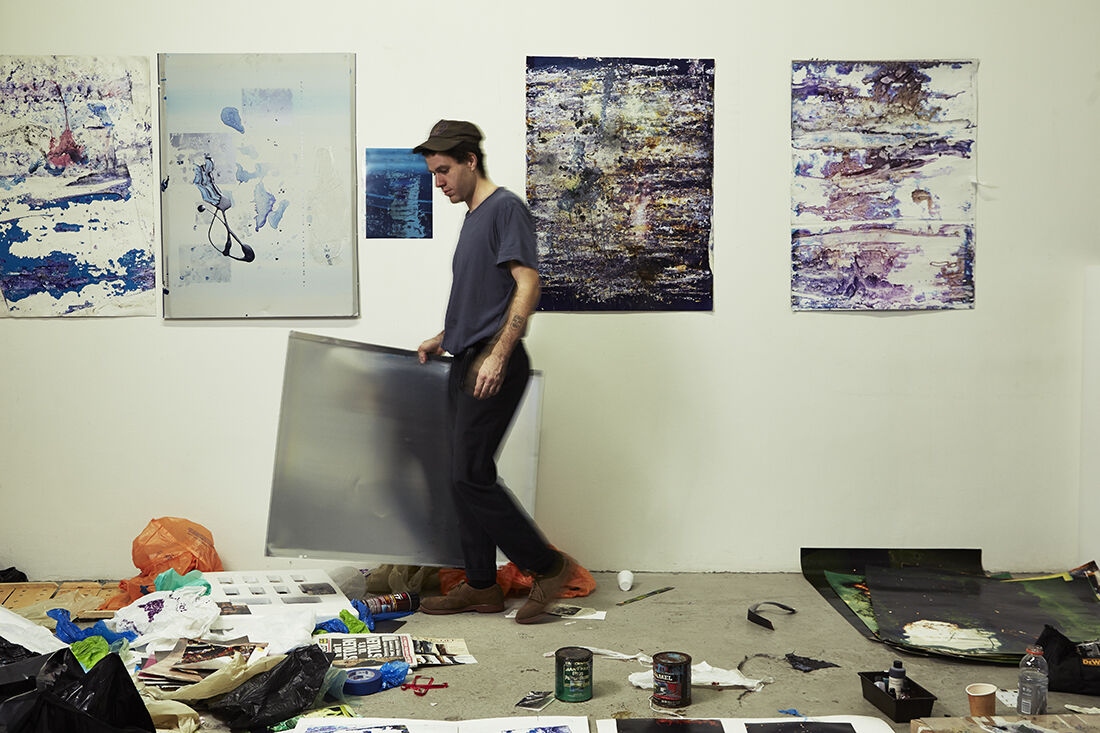 Portrait of Ryan Foerster by Alex John Beck for Artsy.

When Ryan Foerster was a kid in Newmarket, Canada—a suburb of Toronto—his mom, an artist, would let him skip school and take what he calls “mental health days.” “I hated school so much, she would be like ‘Alright, you don’t have to go today, but you’ve got to do something, you can’t just watch TV,’ so I would work on my fort in the backyard,” he recalls. Rather than buying new materials, he and his mom would take a tour of the neighbors’ garbage cans, collecting scraps of metal and wood, discarded doors or windows—anything they could lay their hands on. “I’d take it all in the van and then I made the structure of this huge house attached to the fence in my backyard.”
Years later, living in Hell’s Kitchen, New York, and trying to make it as an artist, Foerster would take himself on walks through the neighborhood and pick up waste on the side of the road, eventually incorporating the discarded materials into his sculptural arrangements. Today, with the 2013 Artadia NADA Prize under his belt and major collectors lining up to buy his work, that hoarder mentality can be felt in the details of his small, first-floor Tribeca studio, where haphazard but sparsely placed piles of C-prints are arranged alongside panels of muddied mirror, glass, and printing plates, and a few fragments of wood and metal leaning upright against walls. “This was part of a window frame or something,” he says, picking up a piece of bent, burnished metal he rescued from the dump and examining it, “but it has this amazing curve to it and a hook on it here, which I guess was a hook for a window.” 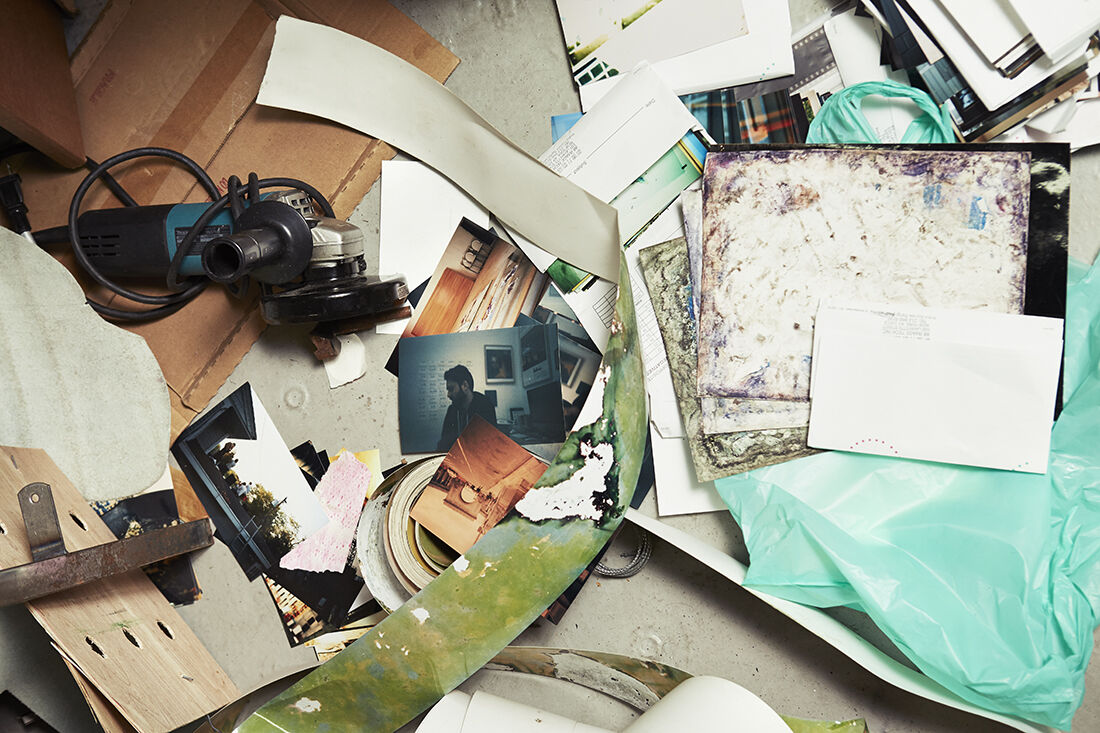 This economy of material, DIY approach, and responsiveness to objects, events, and people that find their way into his path is at the core of Foerster’s practice, not only in his three-dimensional works, but also in his experiments with photographic prints. In his Tribeca space, where we meet—he also has a larger space in Bushwick, housed in the former CLEARING Gallery that now represents him, and which will host a sprawling exhibition of his work next month—a row of abstract and semi-abstract C-prints in uniform dimensions is spread out on the floor. One image appears to show the curling forms of an iron fence, closely cropped and blanketed in hazy gray light; another resembles a pale green atmosphere, its center peeled back to reveal a dark, star-speckled solar system. These are destined for Art Toronto this week, when Foerster will return to his native city and take over Artsy’s booth with an installation of his work.
His early photography includes endless images, compiled into ‘zines, of his high school and college antics—punky snapshots of his friends getting naked or with an object set aflame on someone’s head—and his more recent images are often composed on photo paper retrieved from the waste pile of the Manhattan darkroom he once worked in: the old, yellowed sheets that his colleagues viewed as expired, for instance, or paper used to clean the processor. “Every day we’d run like 50 sheets of paper from a box like this. This is a $50 box of paper, and we would just run them to get it cleaned out.” Lacking the money to pay for expensive photography materials, Foerster began saving the blackened sheets and taking them home to his studio. “[One day] there was a stack of them and they were blowing. So I put, like, a beer can or a coffee cup or something on them. And the condensation underneath it lifted up the emulsion and made it corrode.” 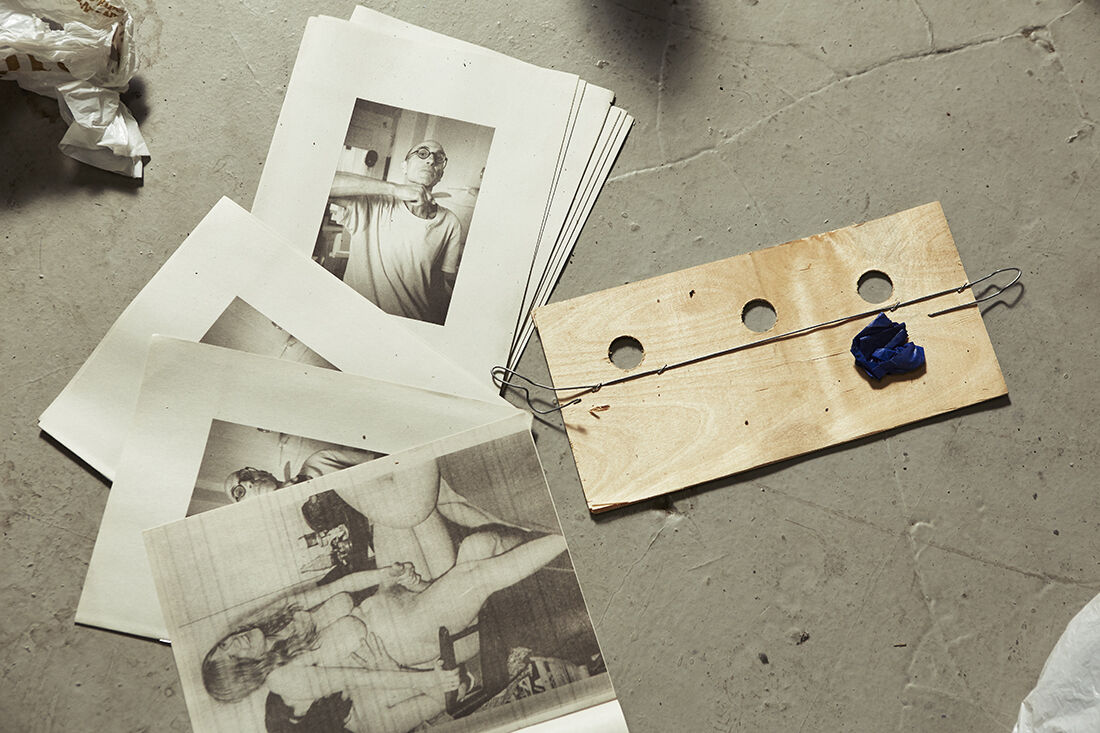 Advertisement
This accident left the imprint of a burnt red ring on the photo paper, with frayed edges revealing nuanced color variations locked into the black ink, an effect that Foerster liked so much he began routinely to experiment with photosensitive paper, exposing it to the elements—rain, heat, bird shit—weighting the paper with rocks and earth to hold it in place, which then become an encrusted layer over the image. “There’s a huge satisfaction for me, obviously, about making something out of nothing,” he reflects.
When Hurricane Sandy struck in 2011, piles of the images stored in his Brighton Beach home became waterlogged; for Foerster, though, the damage only improved them, turning images of people and places into cloudy abstractions. His total lack of preciousness or pretension manifests itself in the curled corners and rough surfaces of his compositions, and extends to his approach to installation and framing. “I really feel like you could just put some shit from the ground in a frame and you’d be like ‘Oh, interesting,’ or put something onto stretcher bars and it’s automatically ‘art.’ It’s like it has this context of importance,” he says. Instead, Foerster pins his work to the walls of galleries, giving them an absorbing, unfinished quality that more closely resembles the artist’s studio than a pristine exhibition display. One has the sense of the artist intensely working through something, with measure and restraint. “It makes things way more democratic when it’s all hung up in the same way, nailed up, or taped up, or using magnets or something—it’s more DIY, like something you would do at home.” 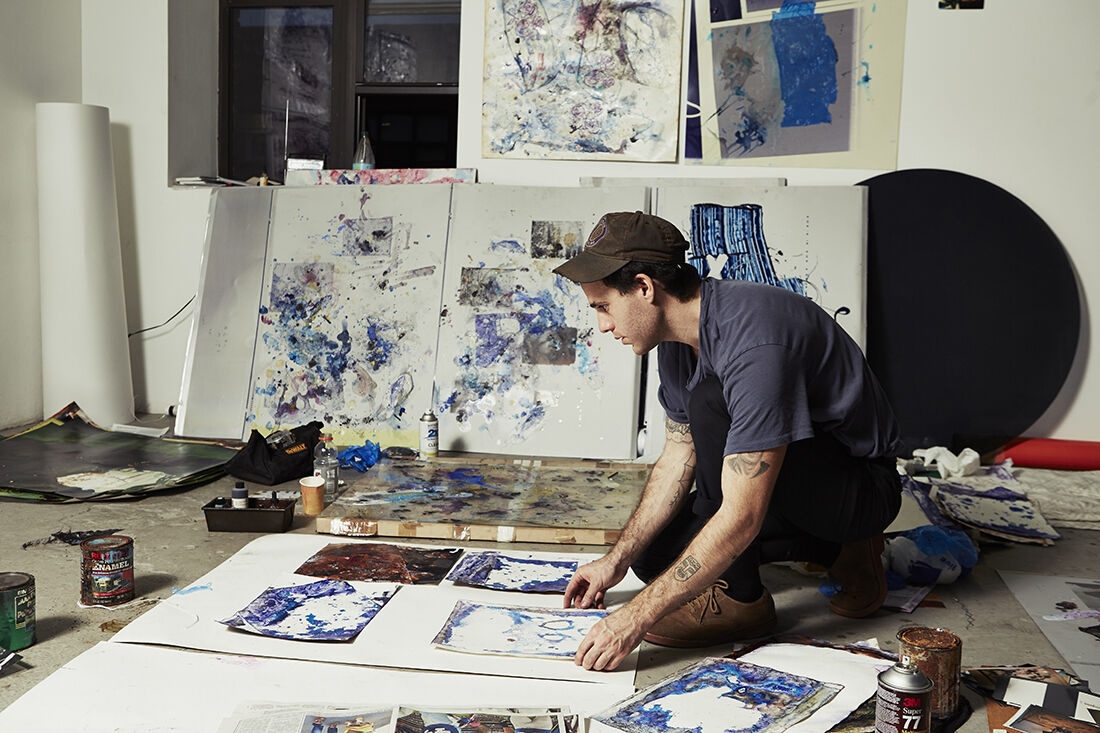 Portrait of Ryan Foerster by Alex John Beck for Artsy.

I can’t help asking if behind Foerster’s thrifty spirit and endless recycling of materials there is some environmental message at play. “I mean, I definitely have concerns,” he considers. “And also because I went through the hurricane and had this work made out of it, and because a lot of these photos look like the apocalypse, or the earth exploded, or like it’s the fucking end of the world, you know? So there are parts of it, for sure, that are about the environment—but you could say it’s about anything.”
Critics tend to view Foerster’s chemically corroded images and large-scale printing plates covered in residues and traces of ink as studies of decay, but for the artist this doesn’t quite cut it. “It’s not really decay, you know? I feel like a good metaphor for a lot of my work is ‘composting,’” he reflects. “I like the cycle of things transforming. I think there’s a gray area that I’m interested in.” 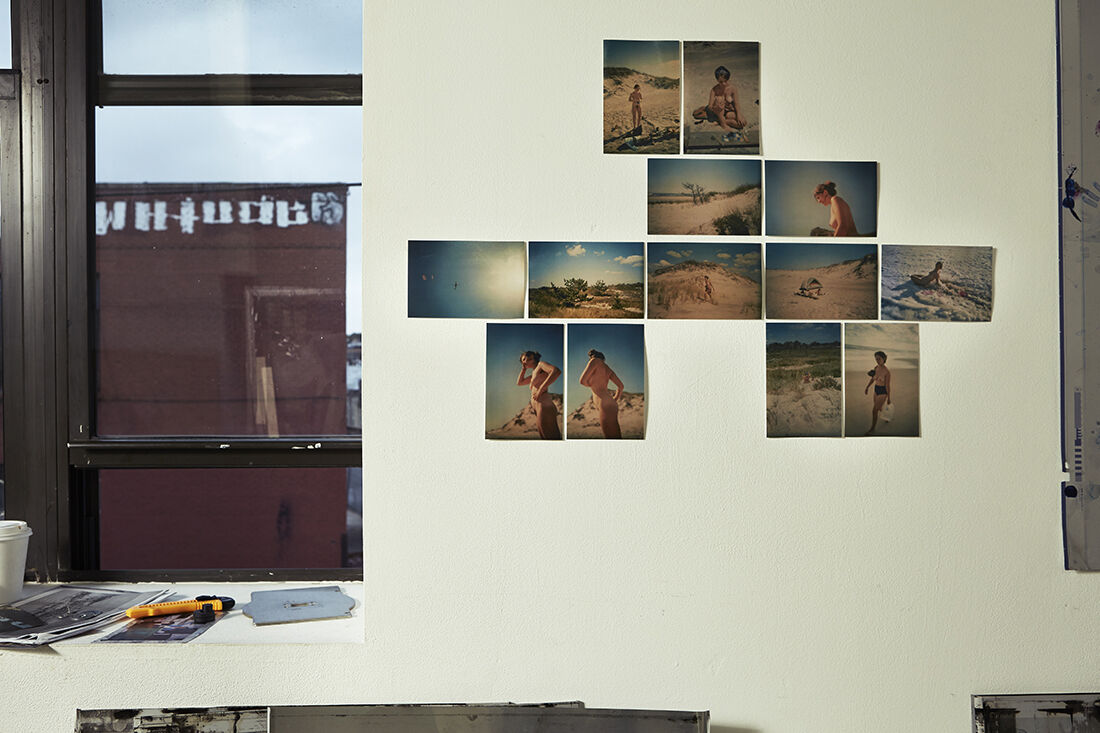 This open-endedness manifests itself in the stream-of-consciousness way in which Foerster combines images in sequences and conceives of shows. “The work is like these memories or like a train of thought; it depends on your mood at the time,” he says, casting an eye over the prints he’ll take to Art Toronto. “It represents how I would think, or how someone from your past comes into your mind for two seconds. It’s connecting the dots.” With something of a homecoming to Toronto this week, Foerster has come full circle, invoking in his work his childhood foraging from all those years ago.
Tess Thackara
Ryan Foerster’s work is on view at Artsy’s Art Toronto booth October 24–27, 2014.
Related Stories