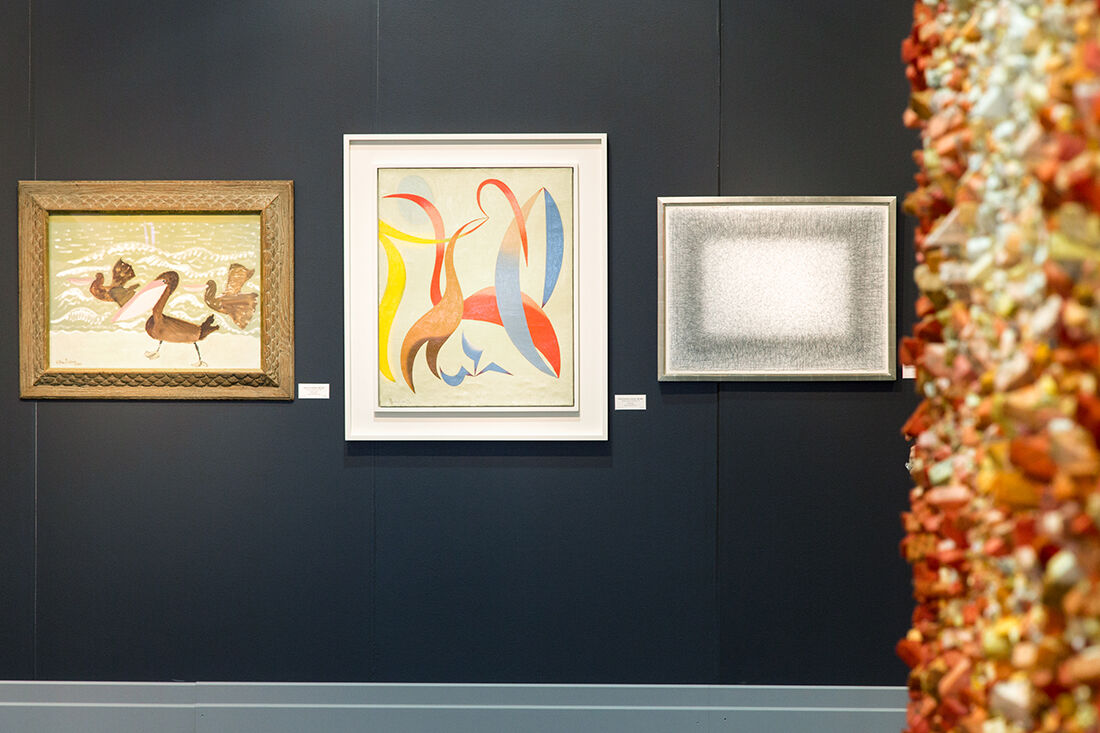 Photo by Christophe Tedjasukmana for Artsy

Frankenthaler’s stunning, diaphanous Sleeping Beauty, featuring mauve and cherry pigments, which bleed into each other, only interrupted by dashes of cream impasto, is on view for the first time at Antoine Helwaser’s back-row booth. There, according to the chirpy Frenchman, each piece was selected “because they are the best” and not to buck any market trends. Though he insists that his gallery’s offerings “were not chosen but found” for the Armory, his booth includes many of the artists seen speckled elsewhere throughout the pier, clearly showing the secondary market’s hand. Also on view in the booth is a print by Robert Mangold, another artist seen often in Armory booths this year, and Sol Lewitt, who it seems nearly every American modern dealer brought along, Senior & Shopmaker Gallery and Armand Bartos Fine Art among them.
Why point out the artists in Uncle Sam’s corner? While the Armory may be the gateway to American art, the modern section emits a hint of the World’s Fair, with each nation dangling their cultural treasures out for oohs and ahs. The Germans brought German artists, the Italians brought Italians, the Japanese brought Japanese, and the Spaniards brought Picasso. Anyone paying attention to art market trends knows what that translates to: Group
Zero
, Arte Povera, and Gutai. All three art movements are as interconnected now as they were during their respective lifespans. 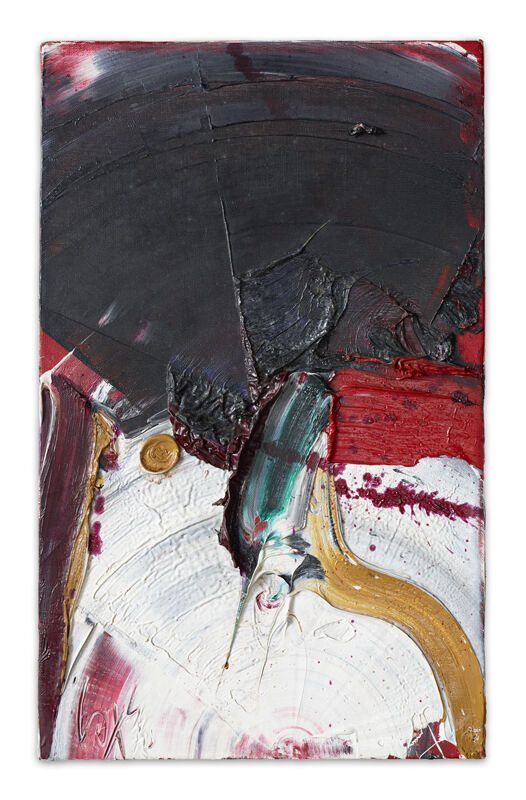 Kazuo Shiraga
Untitled, 1967
Axel Vervoordt Gallery
Though not widely known in this country, the artists in each movement had regular contact with the ideas proliferating in the other groups—even though such global communication seems impossible in pre-internet times. In fact Gutai and Zero were frequently exhibited together in Europe. However, at the fair it isn’t all Heinz Mack, Lucio Fontana, and Kazuo Shiraga (those are all already hanging in uptown galleries—homes too). One German megalith waving the Zero flag is Achim Moeller (of Moeller Fine Art), who has been a quiet, supportive force behind the group since the late 1960s but delved deeper into the market when he acquired the holdings, in 2012, of original American Zero champion, Howard Wise. That included the incredible Otto Piene’s Light Ballet (1961–1969)—the great German futuristic disco stage that would make even Kraftwerk jealous—which was just featured in the Guggenheim’s Zero retrospective. The work, whose value remains undisclosed, is still awaiting a new buyer at The Armory Show. 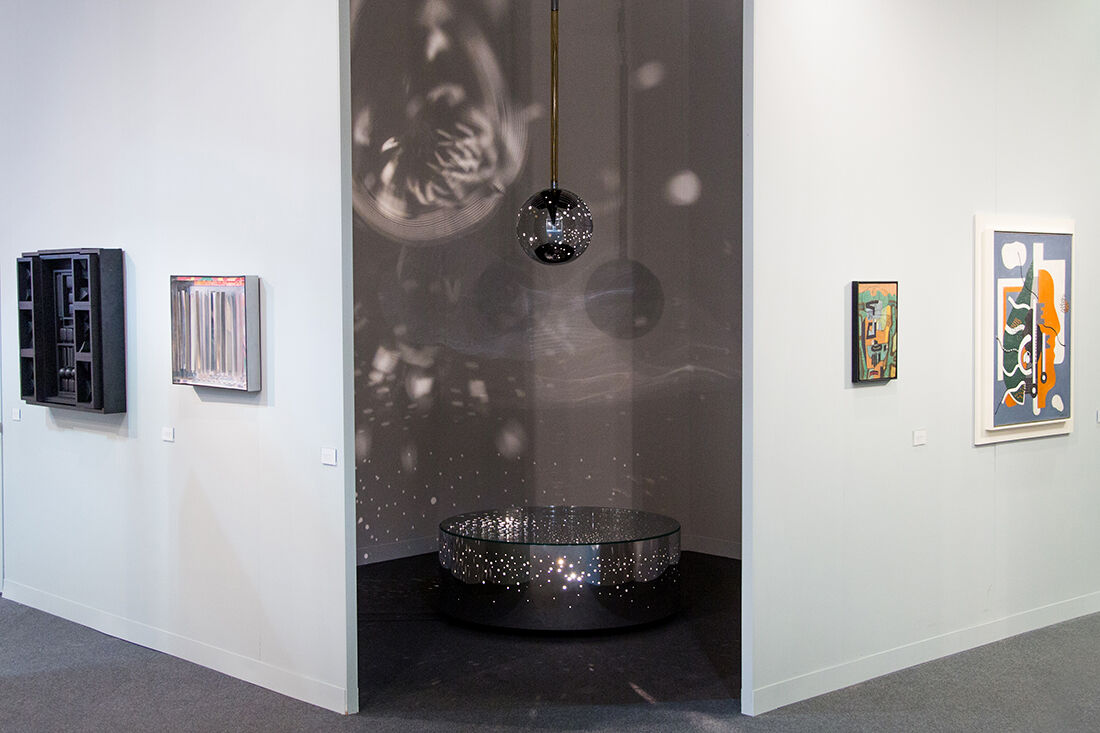 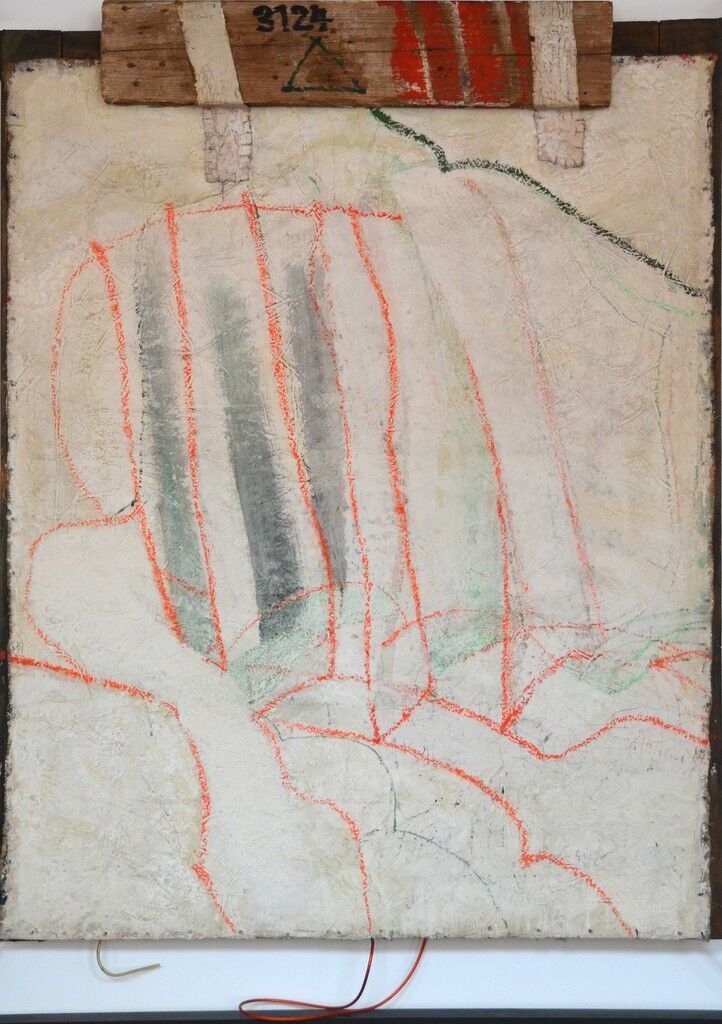 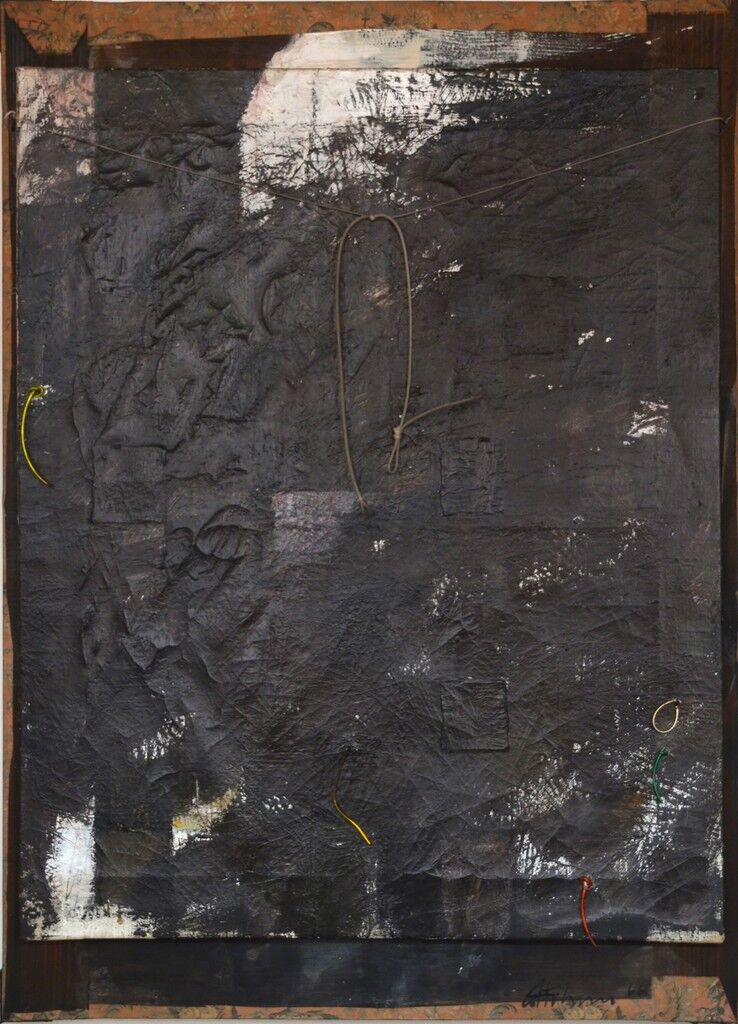 Gerhard Hoehme
untitled, 1966
Beck & Eggeling
As Katja Ott, director of Beck & Eggeling gallery in Düsseldorf, which represents Mack, explained, the Guggenheim’s recent Group Zero exhibition has sparked interest from buyers outside the gallery’s regular collecting circles. Thus, the German modern specialist brought a selection of key pieces from Zero heavy-hitters—such as the delicate, hammered-out, white Otto Piene Time Change, Rasterbild (1957–1974); any texture or color in this early example has been laboriously reduced. As such, the piece is going for over $600,000. However, to draw a line historically, the gallery also brought Mack’s favorite artist, the Informel painter Gerhard Hoehme, who was painting alongside the Zeros in the ’60s and ’70s, but as Ott explains, really pushed the formal boundaries of painting by incorporating other materials onto the canvas, as in untitled (1966), where he wove string into the tableau and painted it over with a chemically created black pigment that cracks when it dries. Another interesting example is Informale (1964), where on top of a string-sutured canvas, Hoehme nailed a piece of wood to the frame. Both works are asking a hair under $90,000. 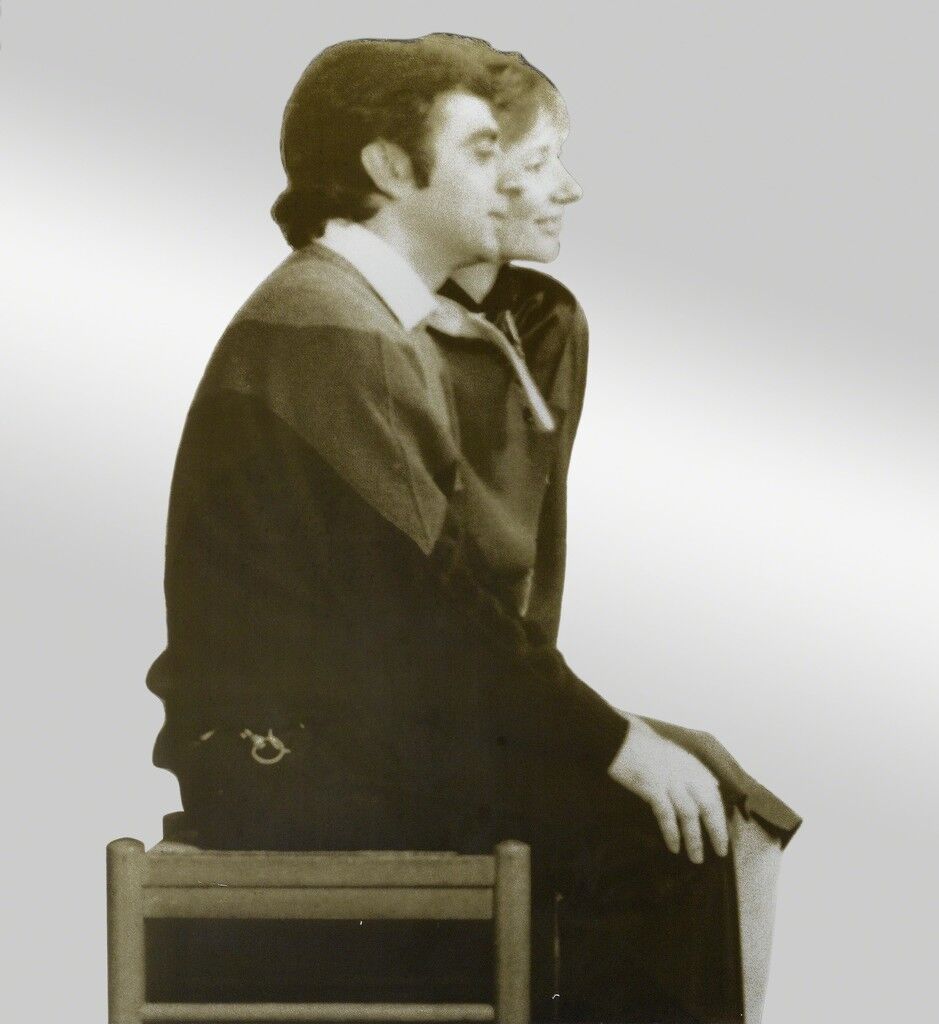 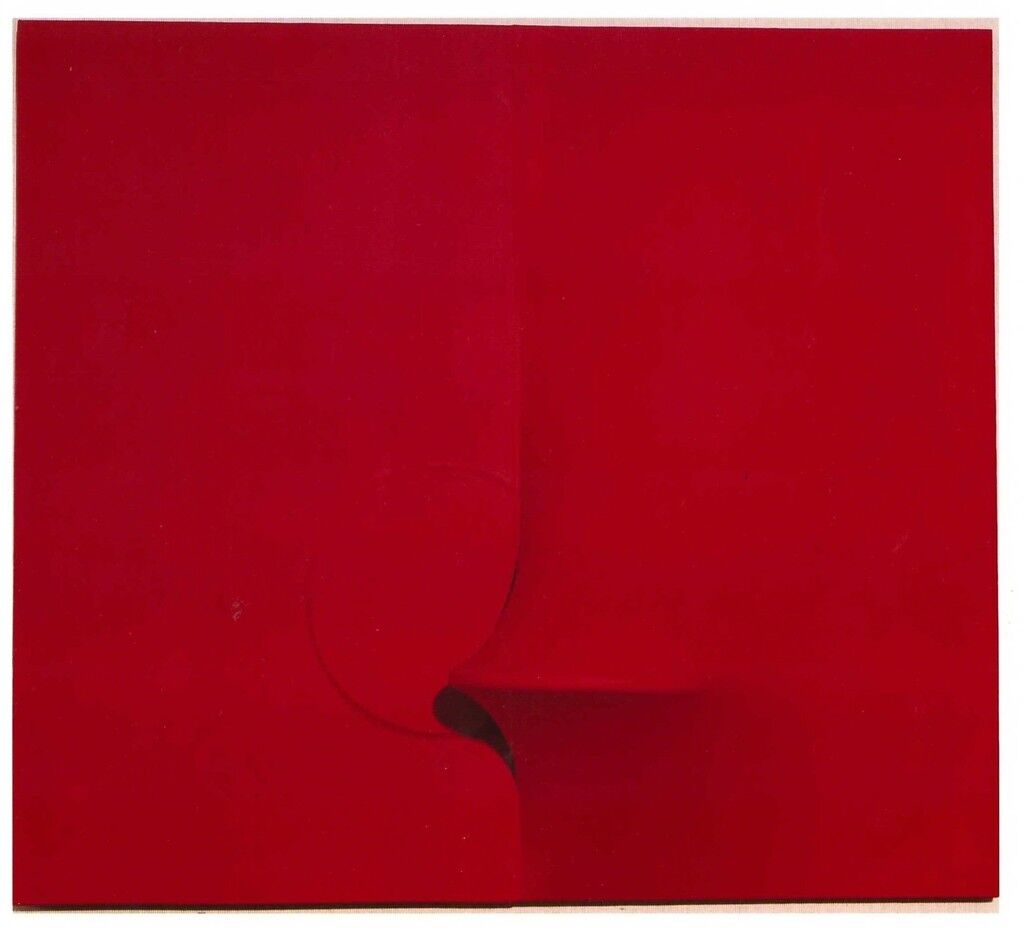 Agostino Bonalumi
Rosso, 1968
Repetto Gallery
Combining forces with Beck & Eggeling is Repetto Gallery, based in London, which complemented the space with Arte Povera—although director Carlo Repetto pointed out that Fontana’s experiments in clay, which can run up to $70,000, are not actually Povera but rather his own more Zero-leaning style. There wasn’t a Concetto Spaziale—a.k.a. the slash canvases—in sight at the booth, however, there were plenty of Michelangelo Pistoletto mirror paintings from the 1960s through 2000s, ranging from $75,000 for recent editions to $350,000 for Rosa e Enzo (1983). However, the highlight of the booth was the jocular and faintly humorous Rosso, a post-modern shape of what resembles a nose by Agostino Bonalumi, from 1968, that comes from a private collection and is back on the market for $850,000. It would seem his pricing is consistent. Over at Mazzoleni Galleria d’Arte, from Turin, the same style of Bonalumi, also from 1968, this time titled Bianco, costs the same sum, though a similar 1971 version is going for $600,000. The gallery also brought a series of small Fontana slashes, including a green 1967 Concetto Spaziale that is going for $2 million.
And of course, then there’s Gutai, which is seeing its heyday in the New York galleries this spring—there are three concurrent Shiraga shows uptown—which is one reason why Tokyo-based Gutai specialists Whitestone Gallery—“the only non-secondary dealer” on Pier 92, according to its director—chose to bring a selection of Gutai painters unfamiliar to American eyes. That includes Yuko Nasaka, whose practice takes shape only in circular form, and Tsuyoshi Maekawa, whose thick, textural canvases incorporate other materials—both artists, according to the director, are considerably lower in price, due to the still-undiscovered depth of the movement outside of Japanese and European collecting circles, with works running between $50,000 and $200,000. He also explained their selection wasn’t just about tapping into a market, but rather stated, “go down to the Lower East Side and the young artists are all using these techniques but not knowing it’s Gutai. People should know about them.” A message that resounds not just for Gutai, but for Pier 92 overall.
Julie Baumgardner
Explore The Armory Show 2015 on Artsy.
Related Stories