Artsy Editors
Jun 15, 2015 10:28am
Booths within many fairs focusing on young artists recently have offered up an all-you-can-eat-buffet of market darlings. Don’t expect that from LISTE. It takes an astute and dedicated collector to unpack the works present at this year’s 20th anniversary edition of the fair. Here are seven artists well worth the effort. 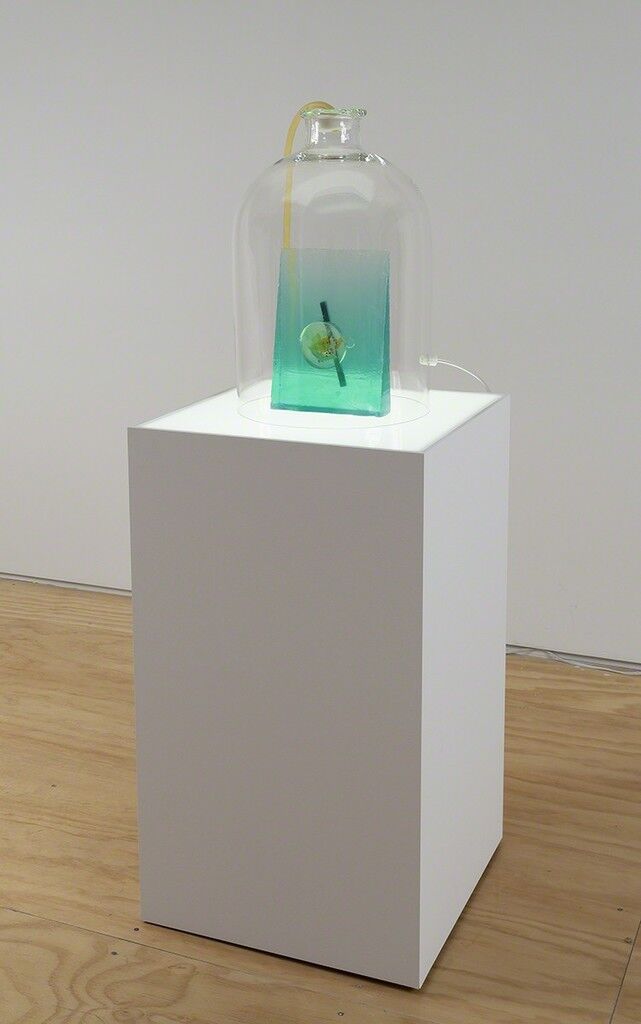 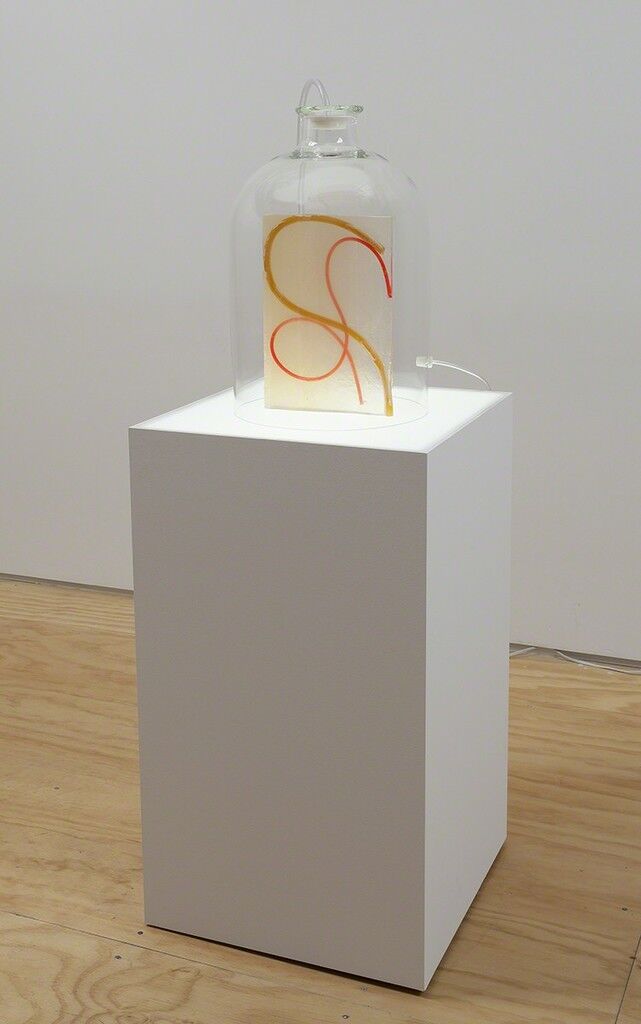 Anicka Yi
A Box in Which Four Seasons Will Fit Again, 2015
47 Canal 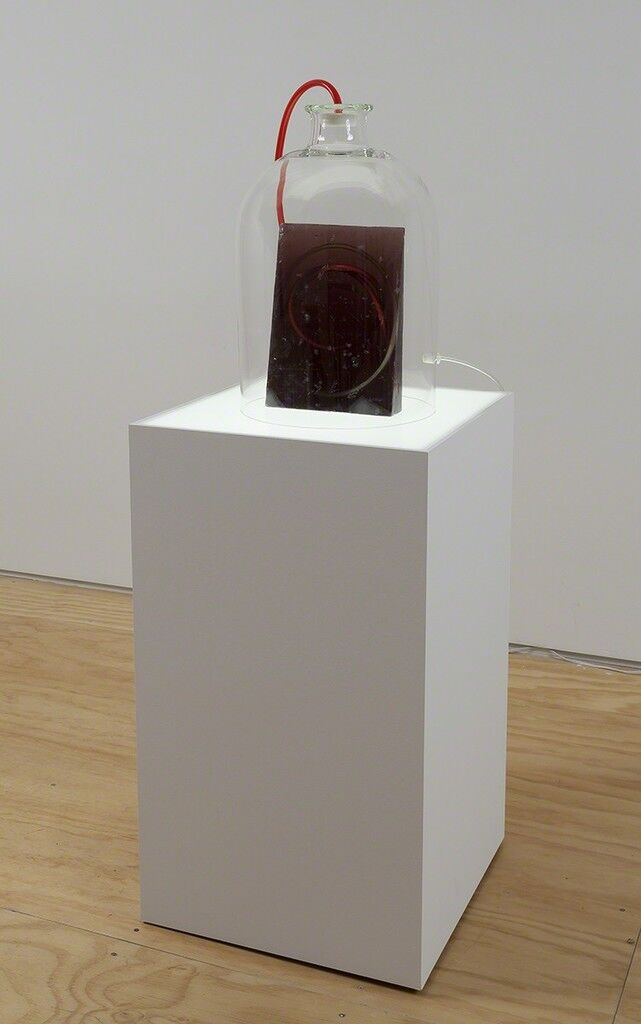 Anicka Yi
Bladder Burst, 2015
47 Canal
Landing the March Artforum cover and triumphing as the new champion of feminism following her sensory-provoking spring show at The Kitchen in New York, Yi’s work is the current Lean In of the art world. The artist employs the latest advances in technology, having recently worked with scientists at MIT to study the digital transmission of scent. Her short-lived but extensive series of “Lonely Samurai” podcasts should be mandatory listening for all recent art history grads. And Yi’s solo show at Kunsthalle Basel, “7,070,430K of Digital Spit,” is sure to make her one of the standouts of Art Basel week. (It’s notably also Elena Filipovic’s first exhibition at the helm of the institution.) At LISTE, 47 Canal will have a selection of smaller-scale pieces for collectors to help push forward the next step in this integral artist’s journey. 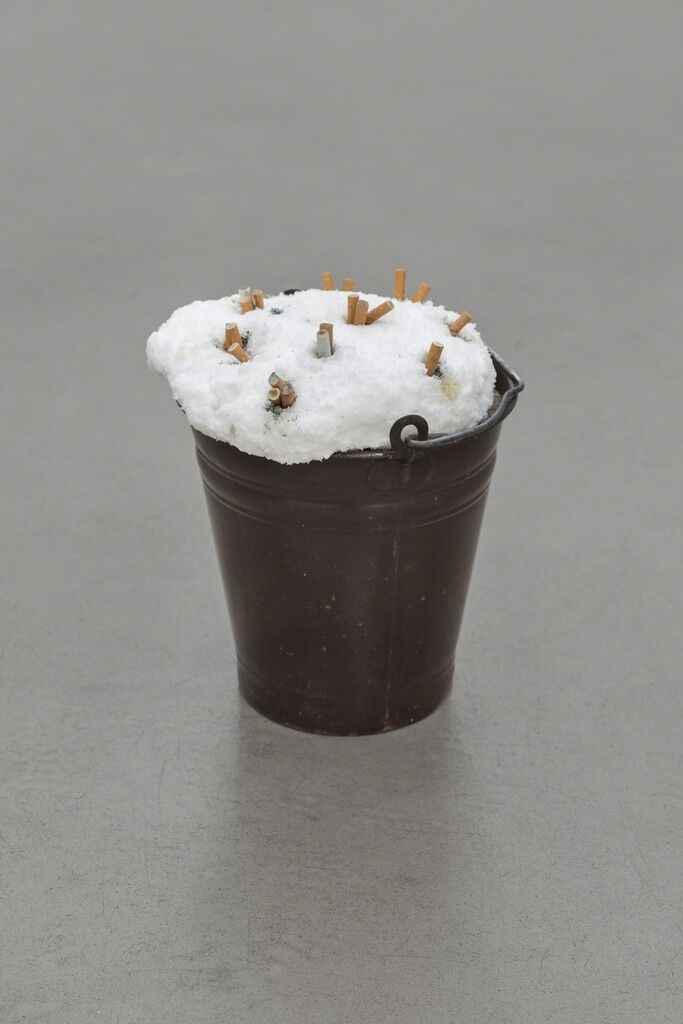 Marlie Mul
Cigarette Hedgehog, 2015
Croy Nielsen
Advertisement
Mul’s practice ranges from digital to architectural, highlighting themes such as contamination, detritus, disposability, and the inadvertent and everyday traces of human life. Her works painstakingly recreate odd moments that often come to define a memory: the likes of a puddle with garbage, a crushed beer can, or a vent with cigarette butts. While they appear to be readymades, the pieces are usually the results of a labor-intensive process. She was recently featured at Witte de With Center for Contemporary Art in Rotterdam and at SculptureCenter in New York. Make a beeline for this booth, which will also be displaying works by Sebastian Black and Nina Beier, and stunning paintings by Benoît Maire. 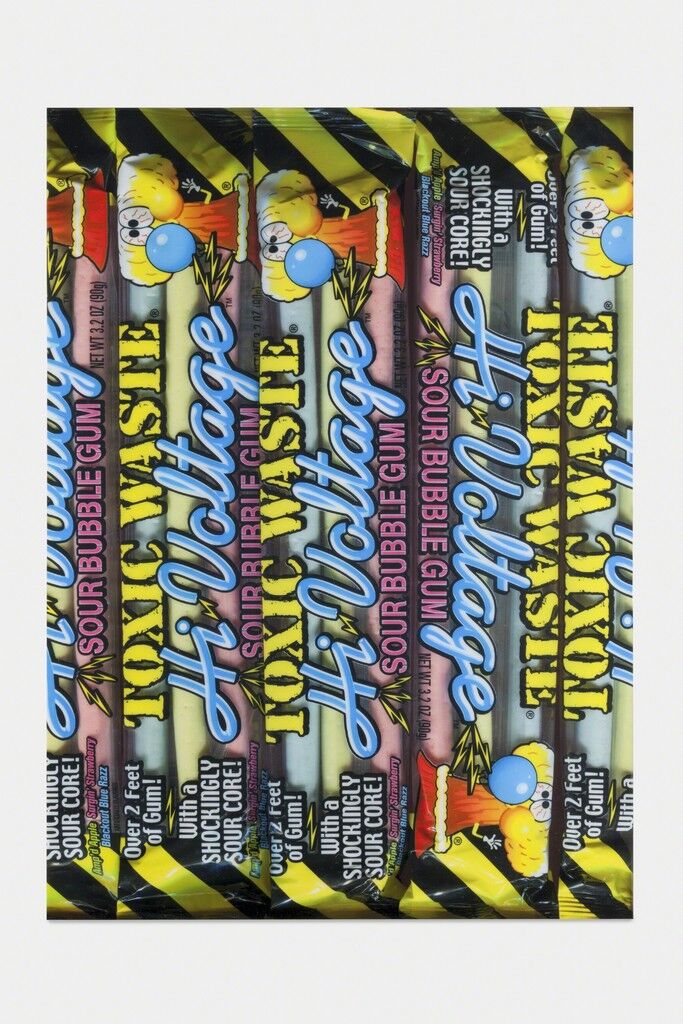 Lucie Stahl
Toxic Waste, 2015
dépendance
With works in two galleries’ booths, LISTE bodes well for Stahl, whose work displays a playful energy and is rooted in modernist experimentation. Her works bring together magazines, posters, found objects, and her own body, ultimately becoming constructed and scanned representations of the 21st century. Her work hinges on the perpetual collapse and concentration of images within mass culture, exploring the ways logos and signage transfer, repurpose, and make absurd their individual parts. Currently, Stahl is in London for a year-long residency after receiving a studio grant from Hessische Kulturstiftung. Serious institutional cred is also set to be bestowed on her work: a solo exhibition at the Dallas Museum of Art and participation in the Lyon Biennale are slated for later this year. 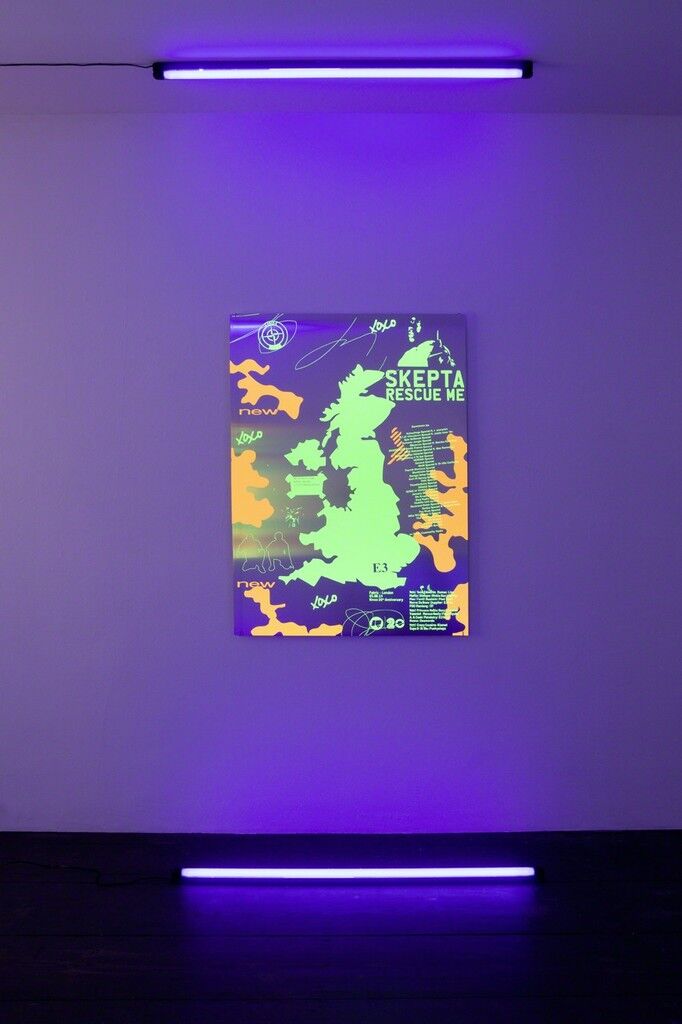 Ilja Karilampi
wag1 fam (GB), 2014
Sandy Brown
Hailing from Gothenburg, Sweden, Karilampi was recently spotted in the “The Catwalk” group exhibition at Komplot in Brussels and heard on the airwaves of Berlin Community Radio. His work plunges into hip hop, cultural memory, and fashion with fanfare and unabashed style. Karilampi’s works often center on manifesting the online realm IRL, imbuing fleeting concepts with physical substance and weight. With a constant stream of shows, pop-ups, and projects, his active persona is an extension of his work. At his best in performance-based pieces, Karilampi steers clear of the faux gloss that tends to dominate the net aesthetic. 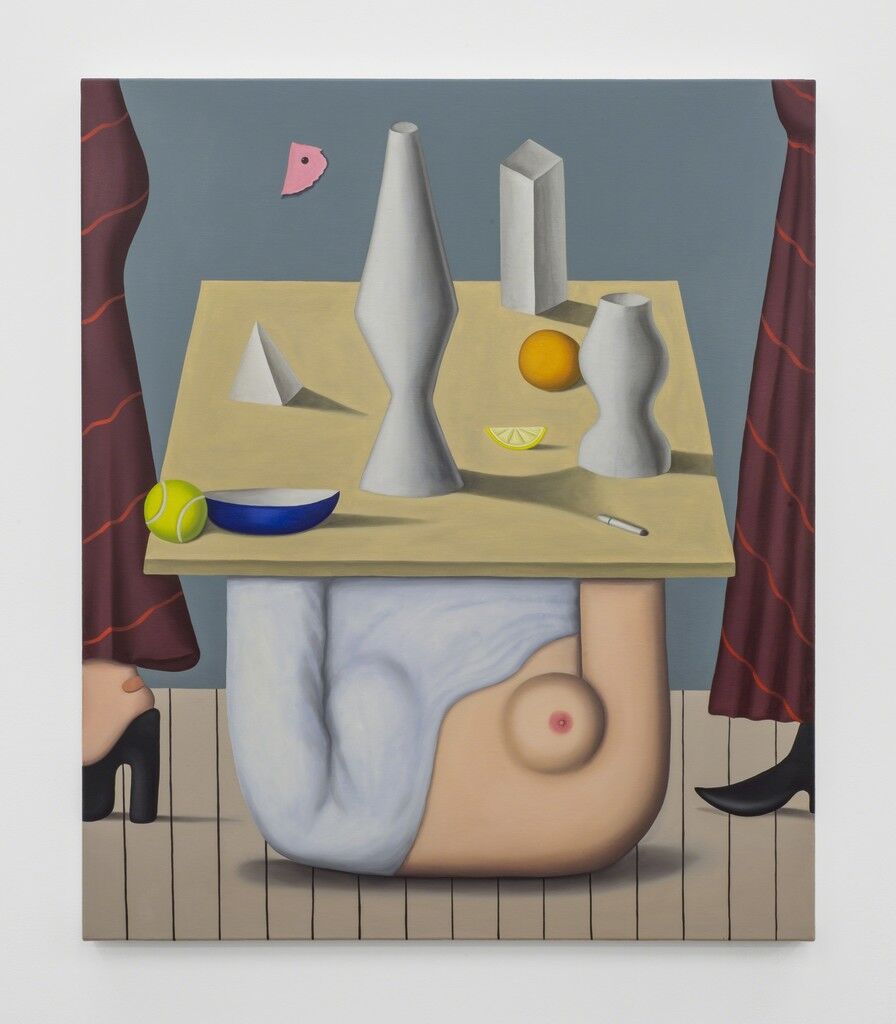 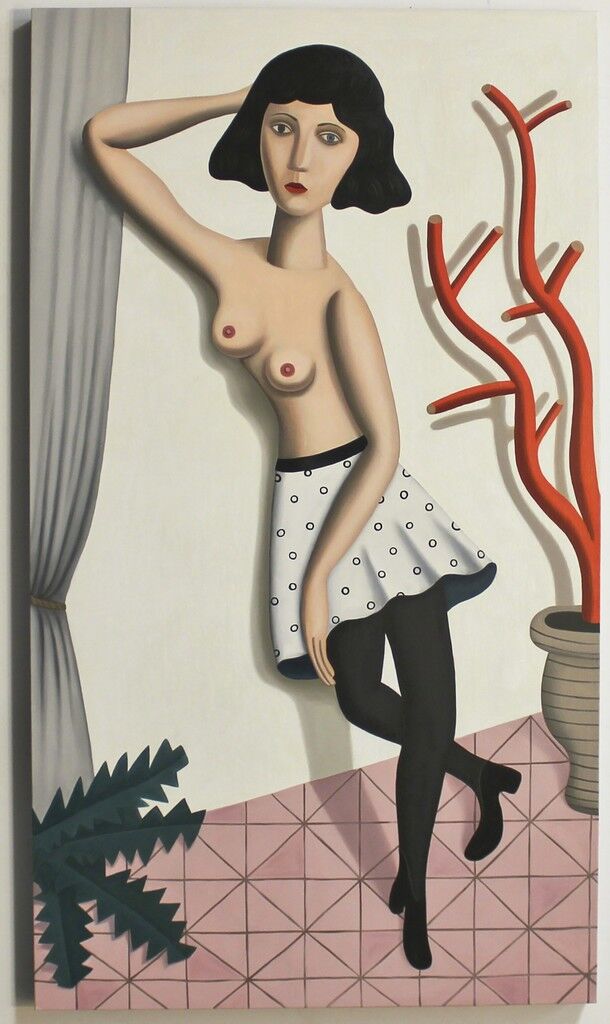 Jonathan Gardner
Leaning Pose, 2015
Mary Mary
“Awkward figurative art has never been hotter!” is the sentiment of many dealers at the moment as backlash against process-based painting reaches its apex and collectors begin to look for the next big thing. One could argue that Magritte and Picabia are the most influential artists this spring—with Sascha Braunig gaining acclaim, Genieve Figgis scoring a show at Almine Rech next fall, and Victor Man stealing the show at the Venice Biennale. Among a fresh crop of surrealists, Jonathan Gardner has demonstrated incredible momentum this year with shows at BolteLang in Zurich and Nicelle Beauchene in New York. He is currently featured in a group show at Sadie Coles in London.

“The body’s periphery is permeable...One re-enters the garden by becoming a vegetable.” This is how Balema’s works were introduced at her latest show at Croy Nielsen in Berlin. Toeing the line between biological and philosophical, the impregnated shapes, filled with liquid, reveal an abstract body, one that is cannibalistic and could be seen as medical vessels or deformed organs. These strange sculptures that permeate the senses and draw attention to human life processes will occupy High Art’s booth at LISTE. Made of soft PVC plastic, steel, and water, the bags are displayed in various arrangements that let material properties  prevail and incite curiosity in the viewer. 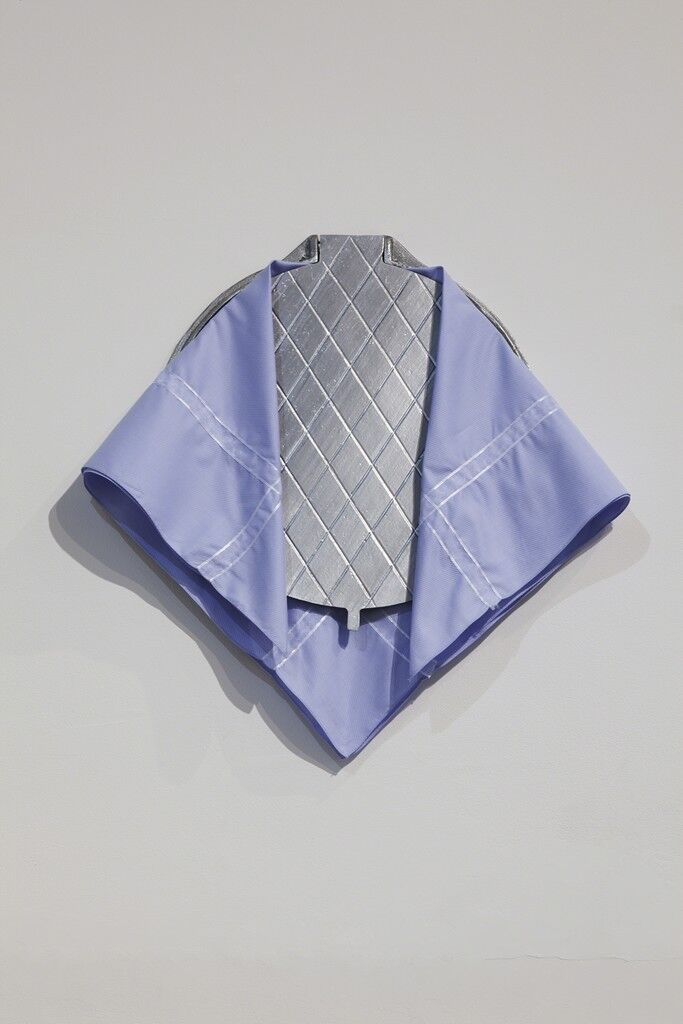 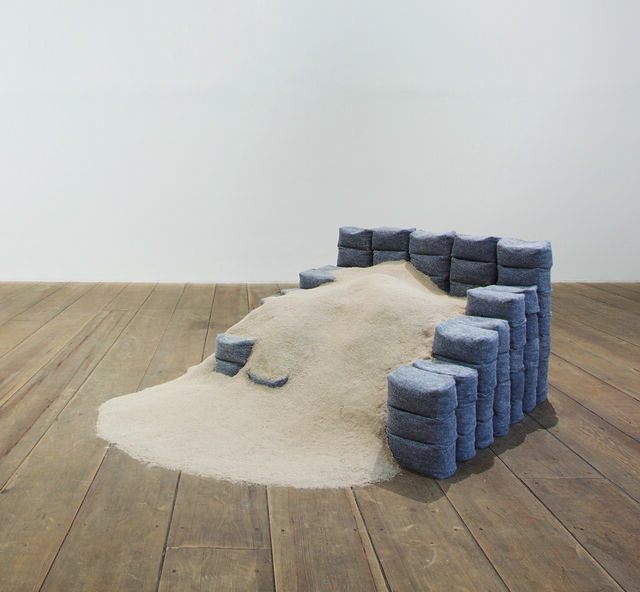 Débora Bolsoni
Escultura individual, 2014
Galeria Jaqueline Martins
After winning the Stand Prize for best presentation in Frieze New York’s Frame section, São Paulo’s Galeria Jaqueline Martins will double down at LISTE, ending the spring on a high note. Their solo booth is dedicated to Bolsoni, a Brazilian artist whose sculptural objects are reappropriations of common materials, burdened with cultural and mythical ideals. The elements she uses to create dichotomies come to form an intricate language of signifiers, through which she expresses systems of power, social order, and merit.
Explore LISTE 2015 on Artsy.
Related Stories