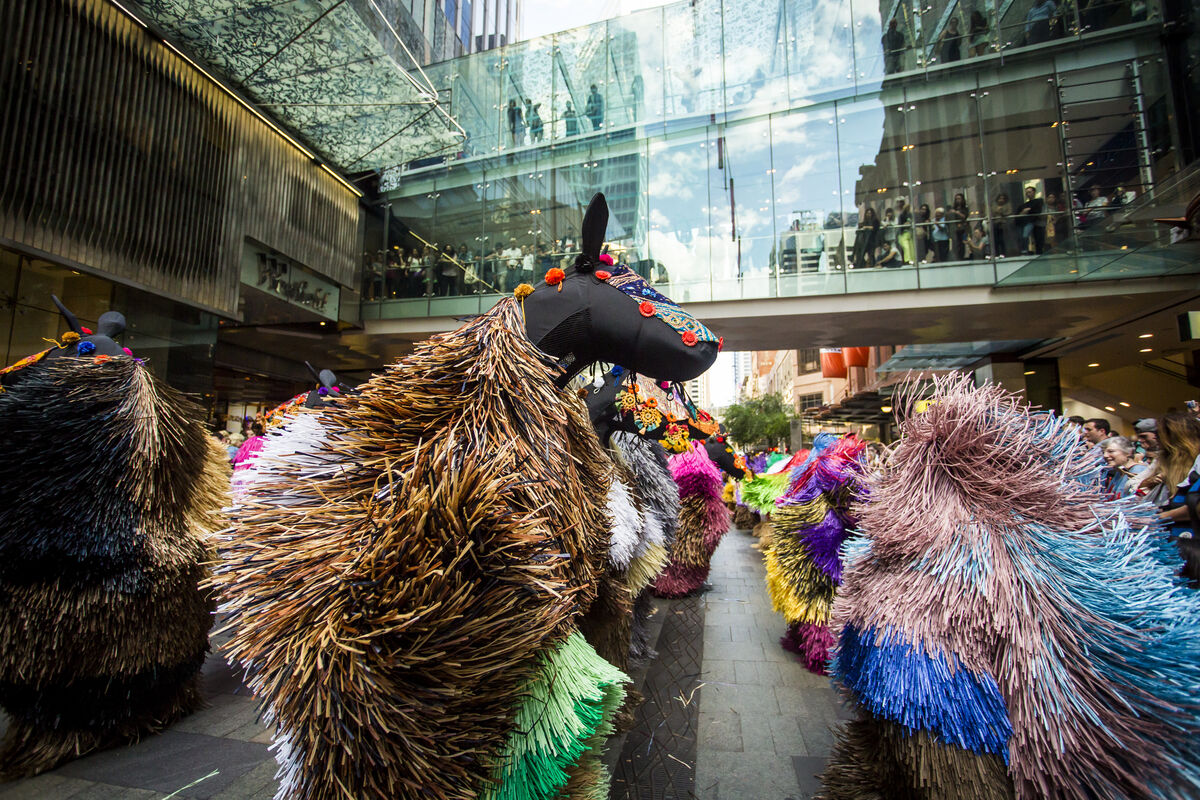 CHICAGO – EXPO CHICAGO, the International Exposition of Modern & Contemporary Art, in partnership with Navy Pier, Chicago’s mission-driven cultural district and the Chicago Architecture Biennial, will present the highly-anticipated collaboration between renowned contemporary artist Nick Cave and internationally-acclaimed architect and MacArthur Fellow Jeanne Gang for Here Hear Chicago, a new work that incorporates art, design and performance. The signature project will be featured at Navy Pier this fall as part of the public programming for EXPO CHICAGO—launching during Vernissage, the opening night preview of the exposition benefiting the Museum of Contemporary Art Chicago—and the Chicago Architecture Biennial (September 16, 2017–January 7, 2018).
“Since its inception six years ago, Navy Pier has been home to EXPO CHICAGO, hosting international collectors, curators and art enthusiasts each September," said EXPO CHICAGO President | Director Tony Karman. “We are grateful that this dynamic collaboration between two of Chicago’s leading art and architectural voices had been timed to launch on the opening day of this year's exposition, further amplifying our extensive partnership with the Biennial and Navy Pier".
As part of Here Hear Chicago, the locally-based Cave and Gang are set to present a series of live productions in which performers will intersect and respond to a field of dynamic, custom-fabricated objects designed by Gang and her practice, Studio Gang—who also designed the layout of EXPO CHICAGO in 2012. The performance series includes Cave’s newest performance work, Up Right, and internationally acclaimed HEARD, where dancers perform in Cave’s famed Soundsuits, taking the form of colorful, life-size horses that dance to live music and percussion. Both pieces will be accompanied by Chicago’s most talented musicians, including jazz artist Kahil El Zabar, the Chicago Children’s Choir and others. These and other performances by local artists will be defined by Gang-designed elements. 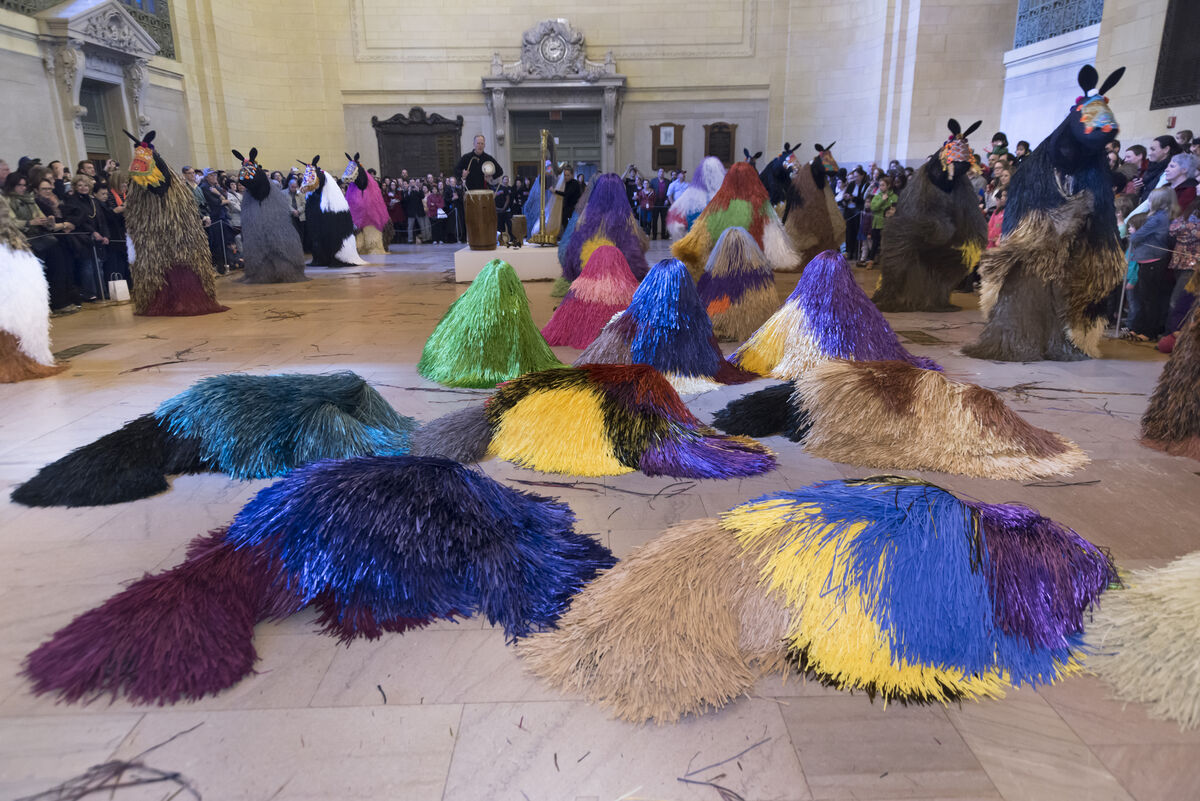 “Navy Pier is thrilled to bring together the inspiring and imaginative works of two creative powerhouses, Nick Cave and Jeanne Gang, with the support of our collaborating organizations—the Chicago Architecture Biennial and EXPO CHICAGO—and our foundation partners, the Chicago Free For All Fund, the Joyce Foundation and the Graham Foundation,” said Navy Pier Chief Programming and Civic Engagement Officer Michelle T. Boone. “The Here Hear Chicago project is exactly the type of work that is furthering the Pier’s mission of becoming a leading cultural destination, locally and globally, as more and more guests are starting to turn to Chicago’s lakefront treasure for free, dynamic and eclectic experiences.”
The first performance is scheduled for Wednesday, September 13 in Navy Pier’s Aon Grand Ballroom at 8 p.m., during Vernissage, the opening night benefit of EXPO CHICAGO (September 13 – 17, 2017). On Saturday, September 16, the program will move outdoors to Navy Pier’s Polk Bros Performance Lawn and South Dock at 5 p.m. as part of the Chicago Architecture Biennial. The full Here Hear Chicago schedule will be released later this summer. All performances are free and open to the public, with limited and first-come-first-served seating available in the Aon Grand Ballroom. 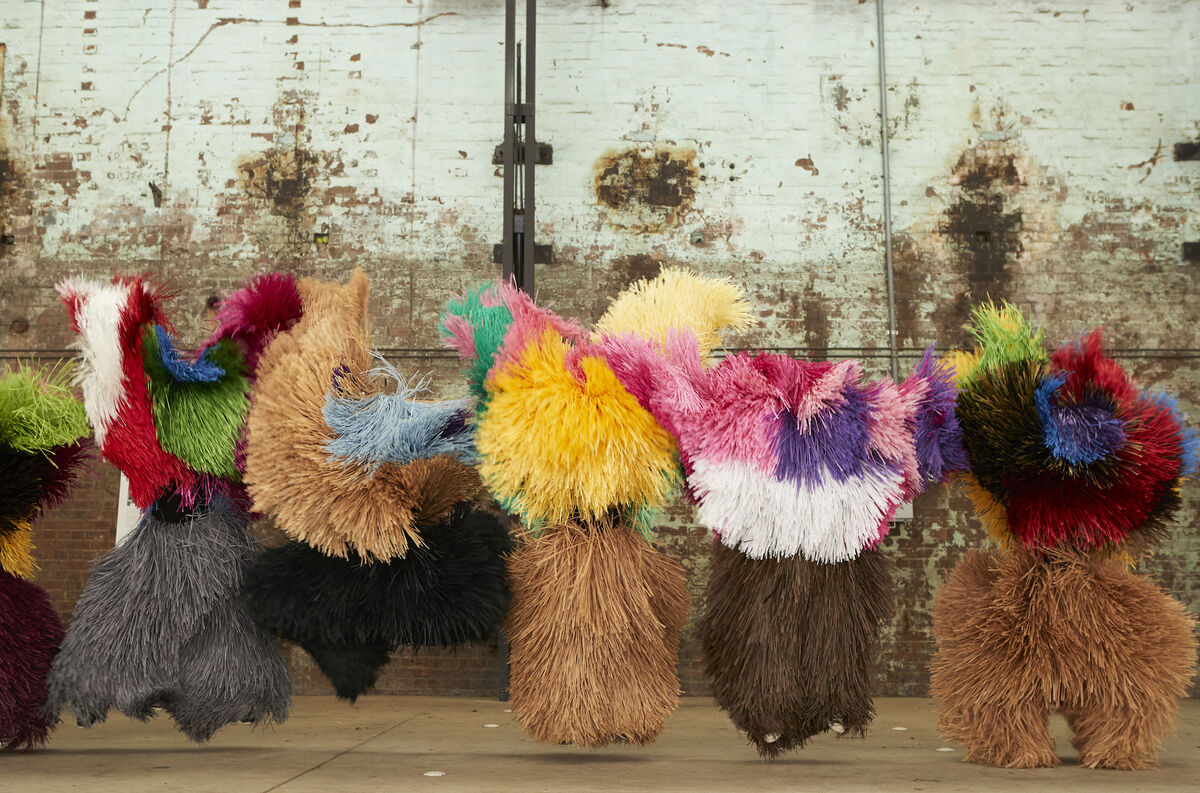 “Up Right Chicago is a call to arms, head and heart, with each performance preparing the initiates’ mind, body and spirit to face the forces that stand in the way of selfhood,” said Cave. “Through movement, ritual and song, performers enter a world they have complete control over, like warriors of their own destiny.” Each performance includes 10 initiates – or members of the community – invited to participate by Cave, 10 practitioners – including Cave and partner Bob Faust, and live music composed and performed by El Zabar, along with six musicians and a vocalist.
Cave’s expressive art pairs imaginatively with Studio Gang’s innovative designs to create a playground of interaction for visitors to experience and enjoy. Building upon the participatory nature of Cave’s work, Studio Gang’s objects will define a flexible space for performance, responding to the spontaneous interactions of performers and the public.
“Like Cave’s works, the objects blur the boundary between audience and performer,” said Gang. “People will engage with the objects, making them performative and expanding the collaboration to the city of Chicago.” Here Hear Chicago builds upon Studio Gang’s history of design projects that connect people in the public realm, including the Nature Boardwalk and Pavilion at Lincoln Park Zoo in Chicago and Hive, an interactive installation opening July 4 at the National Building Museum in Washington, DC. 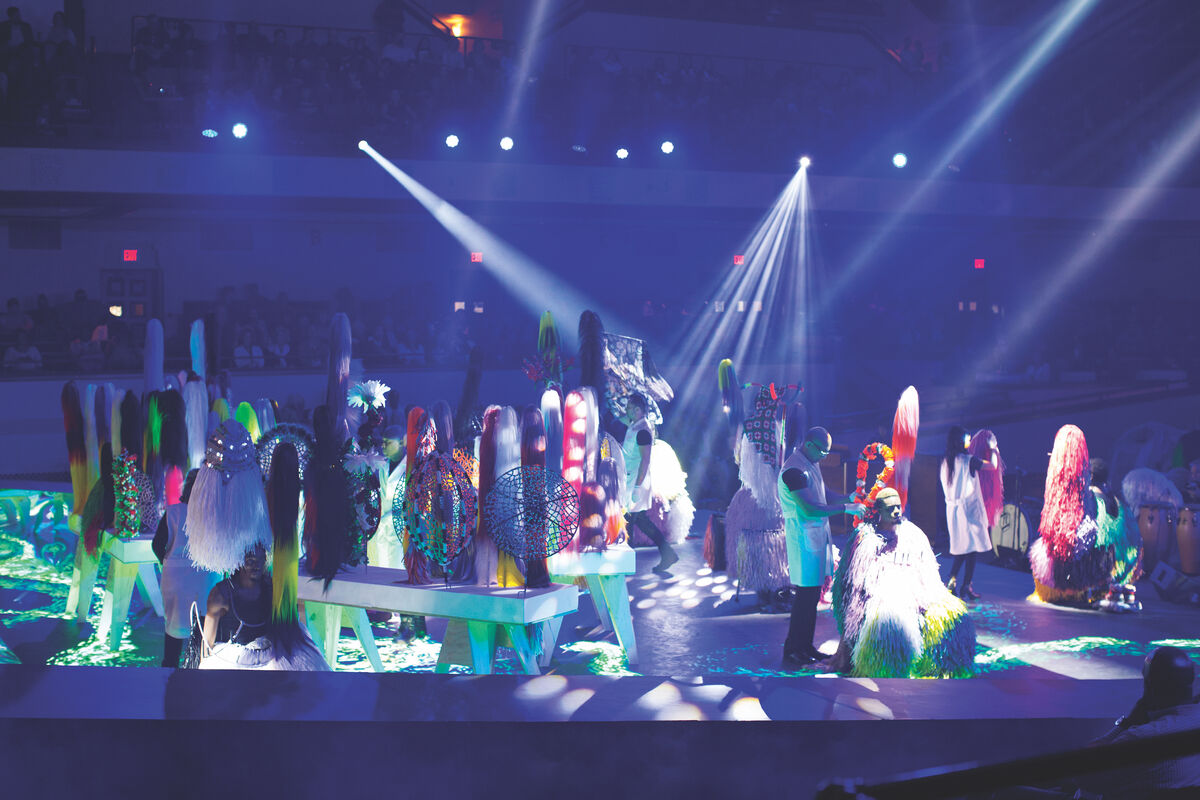 The Cave-Gang collaboration is also part of a series of special projects initiated by the Chicago Architecture Biennial, which provides a platform for groundbreaking architectural projects and spatial experiments that demonstrate how creativity and innovation can radically transform our lived experience. The kickoff of the 2017 Biennial will align with the sixth annual EXPO CHICAGO.
“As we’ve done by inviting six museums throughout the city to participate in this year’s Biennial, working with Navy Pier will showcase another cultural gem that makes this city so special,” said Chicago Architecture Biennial Board Chairman, Jack Guthman. “Visitors to Chicago will be able to see the exciting exhibition at the Chicago Cultural Center and then extend their trip to additional destinations around the city.” 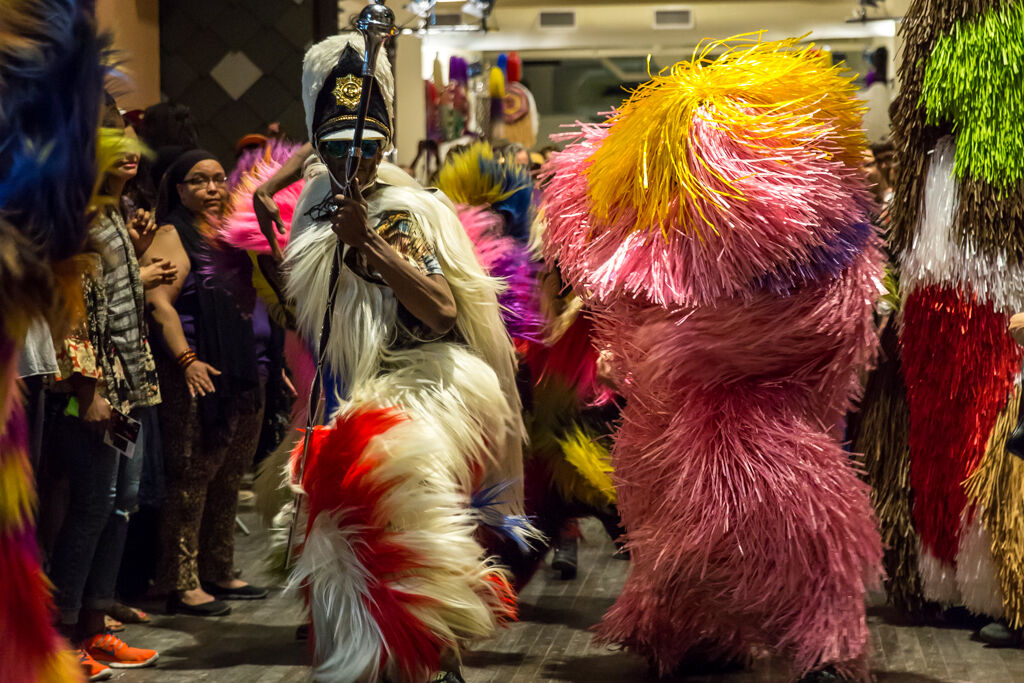 Here Hear Chicago is supported by a lead grant from the Chicago Free For All Fund, a donor-advised fund of the Chicago Community Trust. The Chicago Free For All Fund was established for the purpose of supporting and promoting free cultural activities and events in the city of Chicago, with a primary focus on the performing arts and interactive visual arts.
“The Chicago Free For All Fund and Navy Pier share a mission of offering free, accessible arts and cultural programming that elevates and engages the guest experience,” said Chicago Free For All Fund Board Member Donna LaPietra. “Nick Cave and Jeanne Gang’s collaborative project this fall aligns perfectly with the type of exciting and innovative work we are proud to invest in and support.”
Additional funding for the program comes from the Joyce Foundation, which works to support artists and arts organizations in Chicago and the Great Lakes region. The project is also supported by the Graham Foundation for Advanced Studies in the Fine Arts, which makes project-based grants to individuals and organizations, and produces public programs to foster the development and exchange of diverse and challenging ideas about architecture and its role in the arts, culture and society. 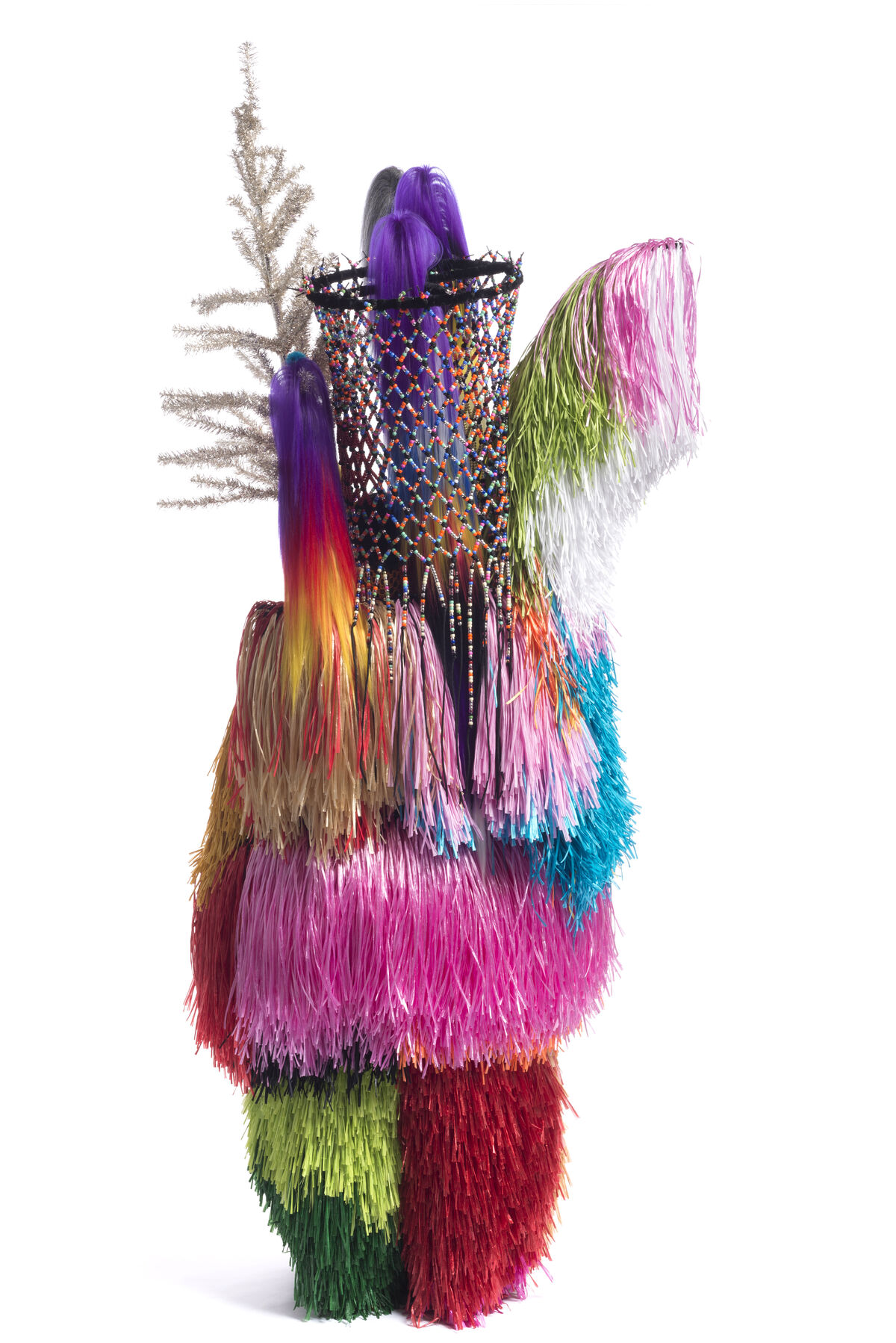 Nick Cave is a Messenger, Artist and Educator working between the visual and performing arts through a wide range of mediums inclusive of sculpture, installation, video, sound and performance. He has been described as a Renaissance artist and says of himself "I have found my middle and now ... working toward what I am leaving behind." Cave's hybrid creations are part Alexander McQueen, part Andy Warhol, and wholly bizarre, brash, and beautiful. He combines elements of sound, performance, color, and costume to create whimsical works that even the darkest soul would find hard to resist. His genre-expanding work explores the ways that African identity is subsumed into disparate cultural codes. Chair of the fashion graduate program at the School of the Art Institute of Chicago, Cave has built a notable reputation as an educator and artist.

Led by American architect Jeanne Gang, Studio Gang is an architecture and urban design practice based in Chicago and New York. Renowned for a design process that foregrounds connections among individuals, communities, and the environment, Jeanne and Studio Gang are currently designing major projects throughout the Americas and Europe, including the expansion of the American Museum of Natural History in New York City; a new United States Embassy in Brasilia, Brazil; and a unified campus for the California College of the Arts in San Francisco. Intertwined with its built work, Studio Gang develops research and related publications, exhibitions, and programming that push design’s ability to create public awareness and lead to change—a practice Jeanne calls “actionable idealism.” This work includes Polis Station, an ongoing project exploring how American police stations can be reimagined through an inclusive design process to better serve their communities that debuted at the 2015 Chicago Biennial, and Reverse Effect, an advocacy publication produced to spark a greener future for the Chicago River.

About the 2017 Chicago Architecture Biennial

The 2017 Chicago Architecture Biennial will be free and open to the public September 16, 2017-January 7, 2018 and is aligned with the sixth annual EXPO CHICAGO, the International Exposition of Contemporary and Modern Art, September 13–17, at Navy Pier. The hub of the 2017 Biennial will once again be the Chicago Cultural Center and will provide a platform for groundbreaking architectural projects and spatial experiments that demonstrate how creativity and innovation can radically transform our lived experience under this year’s theme, “Make New History.” The 2017 Biennial is presented in partnership with the City of Chicago’s Department of Cultural Affairs and Special Events and funded through private donations with lead support from SC Johnson, Presenting Sponsor; BP, Founding Sponsor; Marriott, Hotel Sponsor; and philanthropic support from The Richard H. Driehaus Foundation, The Chicago Community Trust, National Endowment for the Arts, and the Robert R. McCormick Foundation. The Chicago Architecture Foundation is the Biennial’s Signature Education Sponsor.

Located on Lake Michigan, Navy Pier is one of the top-attended nonprofit cultural destinations in the Midwest, stretching more than six city blocks and welcoming more than nine million guests annually. Originally opened in 1916 as a shipping and recreation facility, this Chicago landmark showcases more than 50 acres of parks, restaurants, attractions, retail shops, sightseeing and dining cruise boats, exposition facilities and more. In 2017, Navy Pier continues to celebrate its centennial with a series of special events and programming, year-round rides on the Centennial Wheel and ongoing pier-wide redevelopment efforts as part of the Centennial Vision. Navy Pier, as a nonprofit organization, maintains and manages the 50-acre pier that is being redeveloped as a contemporary, environmentally responsible urban space. More information is available at www.navypier.com.

EXPO CHICAGO/2017, The International Exposition of Contemporary and Modern Art, is presented by Art Expositions, LLC at Navy Pier’s Festival Hall, hosting more than 135 leading International exhibitors presented alongside one of the highest quality platforms for global contemporary art and culture. Now in its sixth year as a leading international art fair, EXPO CHICAGO (September 13–17, 2017) offers diverse programming including /Dialogues, IN/SITU, IN/SITU Outside, EXPO VIDEO, the Curatorial Forum, the Art Critics Forum, Special Exhibitions, EXPO Projects and OVERRIDE | A Billboard Project. In addition, EXPO CHICAGO continues to publish THE SEEN, Chicago's International Journal of Contemporary & Modern Art. Under the leadership of President and Director Tony Karman, EXPO CHICAGO draws upon the city’s rich history as a vibrant international cultural destination, while highlighting the region’s contemporary arts community and inspiring its collector base. In 2017, EXPO CHICAGO and the Chicago Architecture Biennial (September 16–January 7, 2018) will align, establishing the city as a preeminent destination for global contemporary art and architecture, intersecting across a wide variety of programs including panels, international residencies, exhibitions and citywide events. In addition, EXPO CHICAGO partners with the Palais de Tokyo in Paris for its first U.S. satellite exhibition to kick off EXPO CHICAGO (September 12) at the Roundhouse at the DuSable Museum of African American History.
Vernissage, the opening night preview benefiting the Museum of Contemporary Art Chicago, takes place Wednesday, Sept 13, 6–9 p.m. General Admission to the exposition is Thursday, Sept. 14–Sunday, Sept. 17 (for hours please visit expochicago.com). Tickets to the exposition will go on sale in June 2017. Northern Trust is the Presenting Sponsor of EXPO CHICAGO. For more information about EXPO CHICAGO and EXPO ART WEEK (Monday, Sept. 11–Sunday, Sept. 17), visit expochicago.com.