The Opening Night benefit for EXPO CHICAGO, Hosted by the MCA
Women’s Board, Raises $300,000 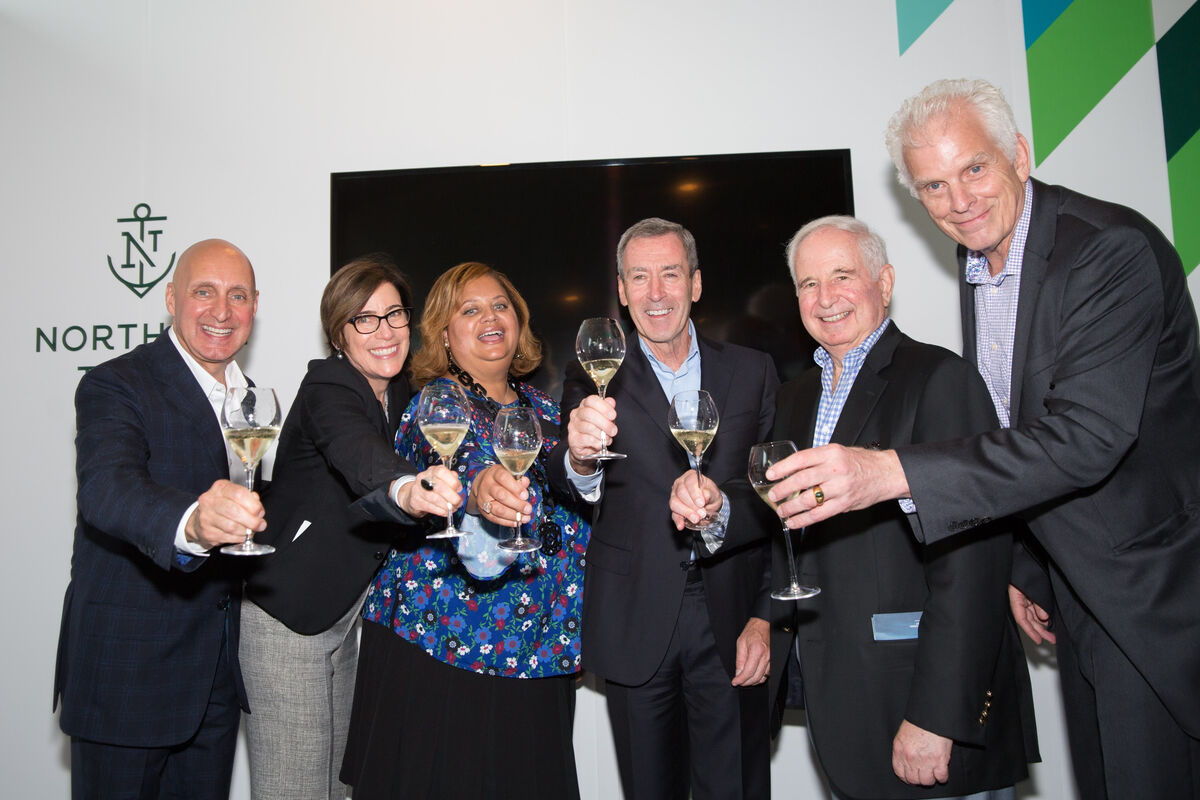 At 6 pm President | Director of EXPO CHICAGO Tony Karman took a humbling moment to thank the crowd for their tremendous support for the fair’s sixth year. He then called on MCA Chicago’s Pritzker Director Madeleine Grynsztejn to speak to the incredible partnership between the MCA and EXPO CHICAGO.

“We have been collaborating with the art fair since the inception of Vernissage and we are especially proud of that partnership this year because we are celebrating the 50th anniversary of the MCA Women’s Board. Thank you to the Women’s Board and all of you for making the MCA the preeminent contemporary art museum in Chicago and beyond for 50 years.” She added, “Collaborations like this are so important, and I am proud to debut another collaboration between the MCA, world-renowned artist Kerry James Marshall and fashion brand MZ Wallace. Together, we debut a gorgeous bag based on a painting by Kerry James Marshall in our permanent collection, and all proceeds go directly to our education programs.”

Northern Trust Wealth Management Central Region President Mac MacLellan then took the stage stating, “We are thrilled with the growth of the art fair and the major impact it has had on our entire city. Northern Trust remains the only financial services firm based in the U.S. to sponsor a modern and contemporary art exhibition of this scale and size, showing our firms commitment to the art community.” He continued, “The entire art world will have its eye on Chicago the next couple of days and that is entirely because of the unique collaborations that EXPO CHICAGO has made possible. Collaboration between the City of Chicago, Navy Pier, Corporate Sponsors, arts organizations, artists and galleries—and in this day in age, when we have so much dissonance between so many despaired groups, it’s nice to see collaboration come together and be successful. EXPO CHICAGO is a great example not only for the City of Chicago but for the rest of the country.”

MacLellan then introduced Navy Pier’s Chief Program and Civic Engagement officer Michelle T. Boone who welcomed everyone to Navy Pier stating, “Tony and his vision for EXPO CHICAGO has really paved the way for establishing Navy Pier as one of the most exciting cultural districts in the city of Chicago and I am just thrilled and honored to continue this tradition and partnership.” She reiterated MacLellan’s sentiments by adding, “This is a tremendous demonstration of the power of partnerships and collaborations between private, public and non-private sectors pulling together to make this the most exciting arts week not only in Chicago but in the nation.”

The City of Chicago Commissioner of Cultural Affairs and Special Events Mark Kelly concluded the remarks, perfectly encapsulating the unique collaborations of the night and throughout the city. “This year is the 50th anniversary of the MCA and the sixth year of EXPO CHICAGO. 50 is the most perfect number in numerology, and six is the most harmonious of the single digit numbers so what we have is major good karma here today. Congratulations to the MCA and to EXPO CHICAGO. On behalf of Mayor Rahm Emanuel, I want to thank Tony Karman and his staff for lighting a fuse, making Chicago on fire with the visual arts. This is a civic event that reaches out into the entire city including artists, museums, galleries, cultural organizations and more. We are not only the center of visual arts in the country but in the world. When you take EXPO CHICAGO, the Chicago Architecture Biennial, the upcoming Art Design Chicago, the Year of Public Art and all the great work going on in the city, right here and now, this is the epicenter of great visual arts in the world.”

A bottle of Ruinart Champagne was popped and all gathered together for a celebratory toast before making their way onto the show floor.

About the Museum of Contemporary Art Chicago

The Museum of Contemporary Art Chicago is one of the nation’s largest multidisciplinary museums devoted to the art of our time. With an international reputation for groundbreaking exhibitions, the MCA presents the latest in cutting-edge, contemporary culture. The performing arts program, MCA Stage, features leading performers from around the globe in its 300-seat theater. Located near the historic Water Tower in the heart of downtown Chicago, the MCA features exhibition spaces, the restaurant Marisol with an interior designed by artist Chris Ofili, the Commons engagement space, a gift store, and a terraced sculpture garden with a view of Lake Michigan.

EXPO CHICAGO, The International Exposition of Contemporary and Modern Art, is presented by Art Expositions, LLC at Navy Pier’s Festival Hall, hosting more than 135 leading International exhibitors presented alongside one of the highest quality platforms for global contemporary art and culture. Entering its seventh year as a leading international art fair, EXPO CHICAGO offers diverse programming including /Dialogues, IN/SITU, IN/SITU Outside, EXPO VIDEO, the Curatorial Forum, the Art Critics Forum, Special Exhibitions, EXPO Sound and OVERRIDE | A Billboard Project. In addition, EXPO CHICAGO continues to publish THE SEEN, Chicago's International Journal of Contemporary & Modern Art. Under the leadership of President and Director Tony Karman, EXPO CHICAGO draws upon the city’s rich history as a vibrant international cultural destination, while highlighting the region’s contemporary arts community and inspiring its collector base. In 2017, EXPO CHICAGO aligned with the opening of the Chicago Architecture Biennial (September 16–January 7, 2018), establishing the city as a preeminent destination for global contemporary art and architecture, intersecting across a wide variety of programs including panels, international residencies, exhibitions and citywide events. In addition, EXPO CHICAGO also partnered with the Palais de Tokyo in Paris for its first U.S. satellite exhibition to kick off EXPO CHICAGO (September 12–October 29, 2017) at the Roundhouse at the DuSable Museum of African American History.
EXPO CHICAGO 2018 will returnSeptember 27–30. For more information on EXPO CHICAGO and EXPO ART WEEK visit expochicago.com.
Share
../../../components/articles_grid/view.coffee