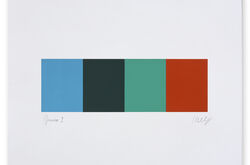 From the Mouths of Babes: Friends Seminary Students on Favorite Works and Artistic Aspirations

In advance of this year's benefit event, Friends Seminary students evaluate works from some of contemporary art’s most celebrated minds. On a recent, unseasonably warm morning, a group of Lower School students gathered to consider five works of art on the block in Friends Seminary’s benefit auction. Fourth graders Hunter and Walker; third graders Aliyah, Horatio, and William; second grader Peyton; first grader Teddy; and kindergartener Maimouna offered their thoughts on prints, photography, and sculpture by acclaimed artists Mariko Mori, Tony Oursler, Richard Serra, Bob and Roberta Smith, and Neil Winokur. Below is their round-table discussion, facilitated (and slightly condensed) by an arts journalist who is also a Friends parent:
Does anything here jump out at anybody?
PEYTON: That one over there. Art Makes People Powerful [by Bob and Roberta Smith]. I think it’s cool because it’s kind of poetic. I would definitely put that in my house. 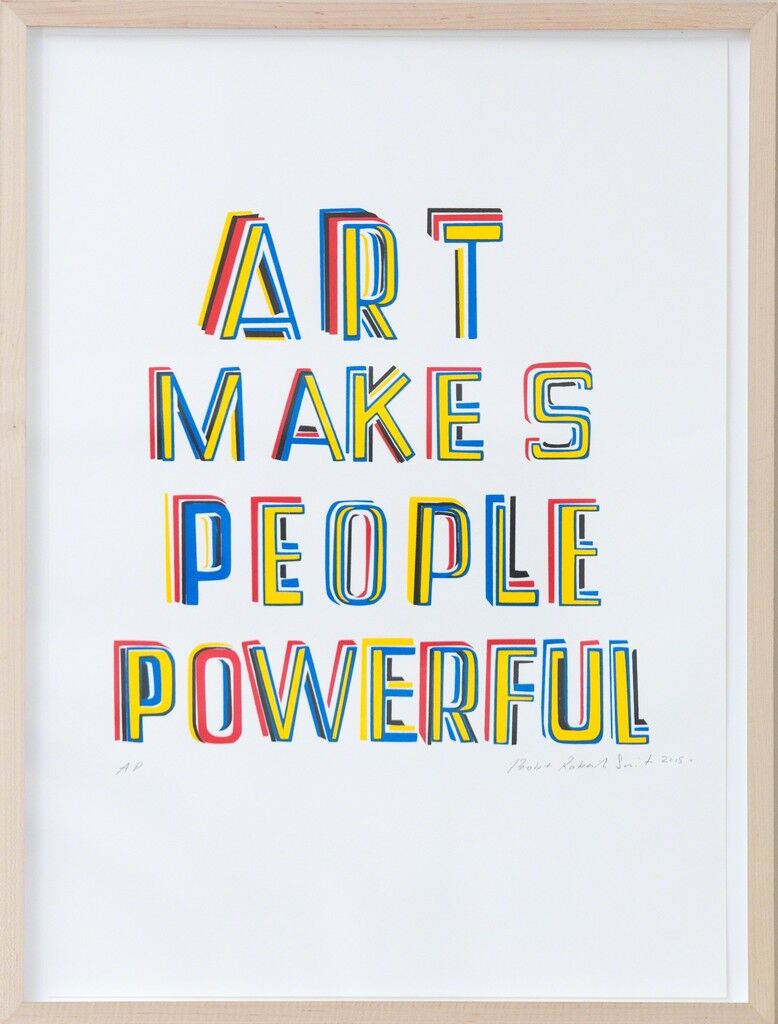 Bob & Roberta SmithArt Makes People Powerful, 2015. Friends Seminary: Benefit Auction 2017
What do you think of an artist using words to make art?
PEYTON: I think it’s a good idea, because it’s kind of like speaking to you in a way. You feel emotions when you read it.
WILLIAM: I like how there’s three lines on each of the letters.
ALIYAH: Art Makes People Powerful sends a surge of confidence through you when you read that. It does make you feel powerful, and it’s like, “Cool! I am totally powerful!” If you hang that up in your bedroom, and you come home from school and say, “Oh, I failed my math! And my science! And literally everything else!” And then you look up and think, “I’ll do better tomorrow.”
I think your parents should definitely get that one for your bedroom.
PEYTON: Wait, there’s only one?
Yes.
CHILDREN: Oh, God.
There’s only one in this auction. It’s a print, from an edition. See, right there at the bottom, it says AP. Do you know what that means? Artist’s Proof. So, that was one that the artist originally kept for himself, but now, it’s here. I don’t know how many prints he made but probably not very many.
PEYTON: But that’s a little bit for the whole world.
So, you can go home and tell your parents to try to buy it at the auction.
ALIYAH: Let’s see who will pay the most.
Who else has a favorite artwork here?
MAIMOUNA: I like the wavy one with the black on it, because it reminds me of a sky—wavy, like the wind, or the ocean. It looks like wings and other things that wave.
HORATIO: I kind of like the curves and how they meet together in the middle. And the splattered paint I like too.
TEDDY: I like it because it kind of reminds me of a bird and—it reminds me of stars, and it also reminds me of space. 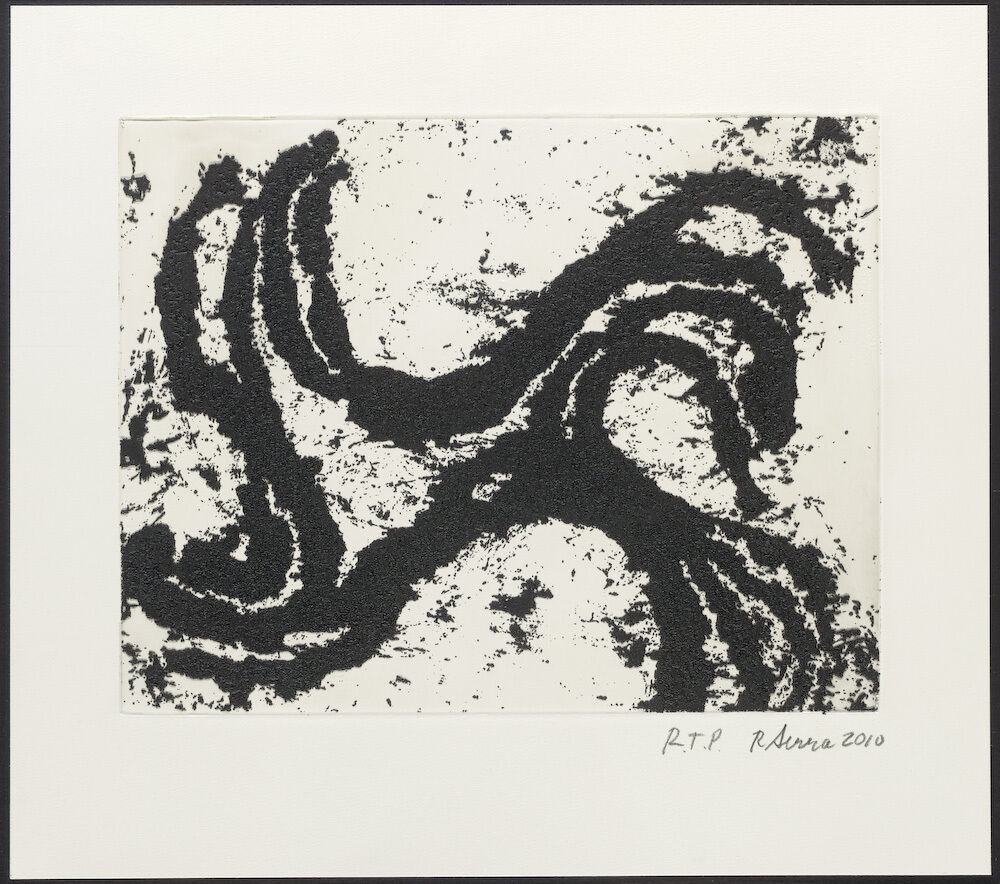 Richard SerraJunction #4, 2010. Friends Seminary: Benefit Auction 2017
What do you think Richard Serra, the artist, may have been thinking or feeling when he was making that?
ALIYAH: I think he might have been thinking about a whole bunch of different things at the same time. Maybe he was feeling like he wanted to paint something—something that meant something to him. Maybe he wanted to paint a picture of his emotions. Maybe he’s a bit excited, because there’s splattered paint all over the place. And I think he’s energetic, because his painting sort of looks like it’s running forward.
PEYTON: Oh, I have another one for that one [pointing to the Tony Oursler]. It reminds me of a maze, a really colorful maze. It looks really pretty.
ALIYAH: Or a subway station map.
CHILDREN: Yeah.
HORATIO: It looks like a Tokyo subway map.
TEDDY: It reminds me of a video game control. It’s very confusing. Yeah, and it also reminds me of a huge map that never ends. 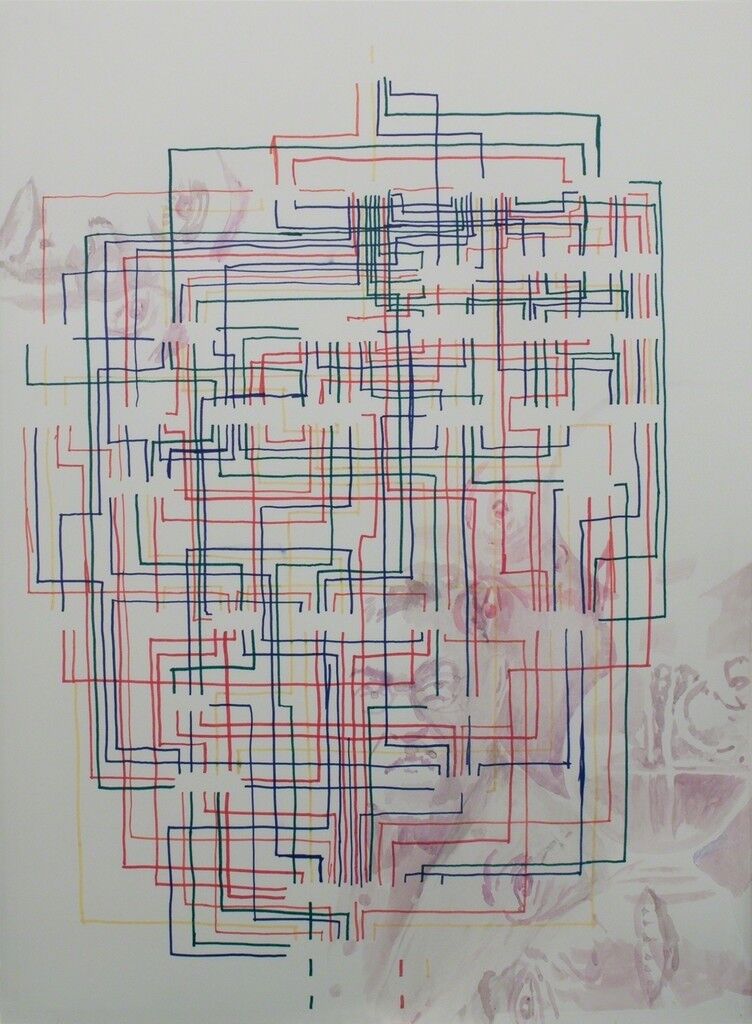 Tony OurslerFriends, Friends, Friends, 2002. Friends Seminary: Benefit Auction 2017
Like a map that leads nowhere?
ALIYAH: It’s like, turn right, turn left, now head forward, go backward, go backward, go backwards. It’s like, “Whoops, I think I made a wrong turn about three miles ago.”
Can you see the faces underneath the lines?
CHILDREN: Oh yeah, I can see. Oh yeah!
WALKER: I think that it’s really unique, and you don't find stuff like that everywhere.
ALIYAH: I looked at the faces in the background, and then I looked back at the [whole] picture, and then I saw a face in [the colored lines]. I see places where the lines don’t keep going and then just stop in two places. Those could be the eyes. Like, the entire thing is a face.
Wow, that’s a super interesting thought.
PAYTON: Also, those little dots [at the bottom], I don't know if you guys can see them, but they look sort of like people entering a maze, and they're just looking up at it like, “Uh-oh.”
Does anyone have a guess as to why the artist may have put this kind of maze, map-type thing on top of faint pictures of faces?
WALKER: Well, I’m not sure who the people are in the background, but maybe he or she, the artist, was trying to say—maybe they're famous and they went through a lot, and it’s saying that’s like a maze. They worked really hard to get through to the end.
Cool. So, those people maybe went through a maze. It’s a metaphorical maze?
WALKER: Yeah, it’s like a life maze.
MAIMOUNA: I have one for the crayon one. It has a lot of colors, like a rainbow.
What do you think of the idea of an artist making an artwork about crayons?
MAIMOUNA: He feels like he wants to color something.
WALKER: I like that someone would think to take a picture of that. Not everyone is going to take a picture of a crayon box.
TEDDY: The background’s really cool. The purple and the pink go together really nice with the crayon box and with the colors of the crayons.
HUNTER: I like it because someone is making art out of things used to make art. 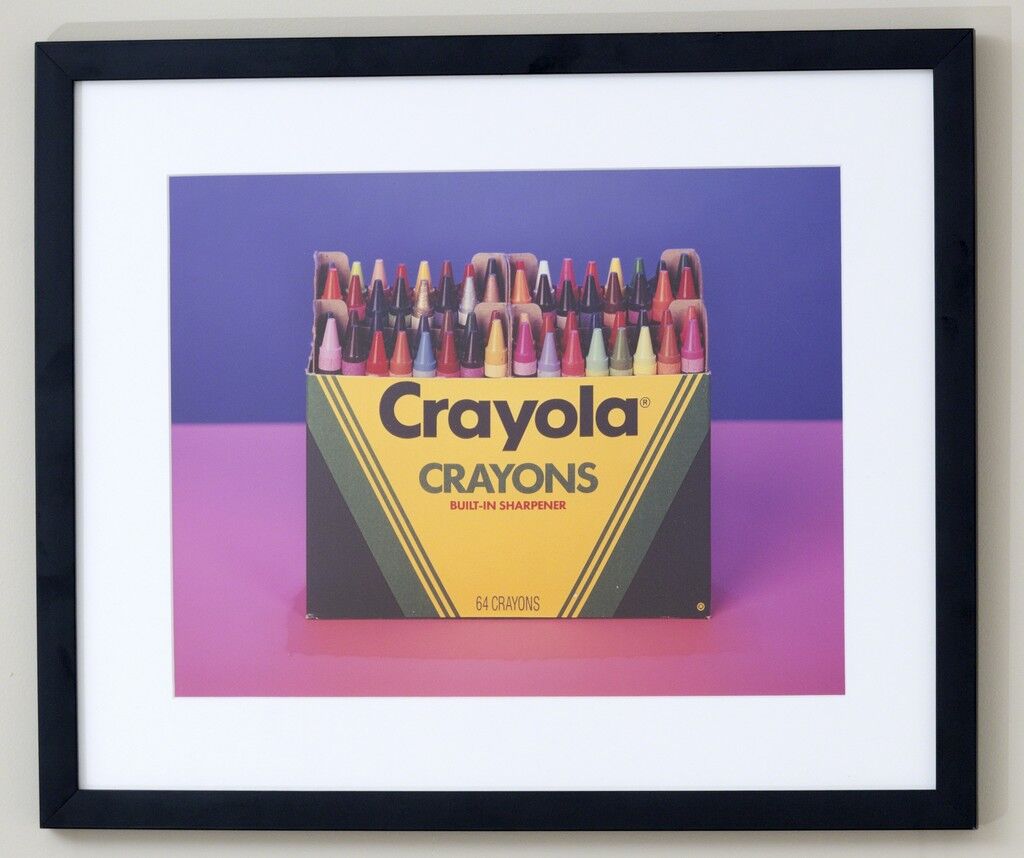 Neil WinokurCrayola Crayons, 1994. Friends Seminary: Benefit Auction 2017
Great! And what about this? Has anybody thought about this ring?
PAYTON: Oh yeah, yeah, yeah, I have. It looks kind of like a neon. I think it looks really pretty. But I wonder if it’s some sort of symbol or something—a symbol for something that I don't know of.
WILLIAM: It reminds me of the sky, because the sky is blue. And it kind of shines.
ALIYAH: If you put it on a black background, then it would look like a black hole or something in space. I would totally put it on display in the front of my house, because it will intrigue all your visitors, like “What’s that? It looks awesome! It’s shiny and blue and yellow and shiny.” It will be the first thing you notice. Like, “Whoa! That’s shiny.”
MAIMOUNA: It reminds me of something in gymnastics. Which you jump through. 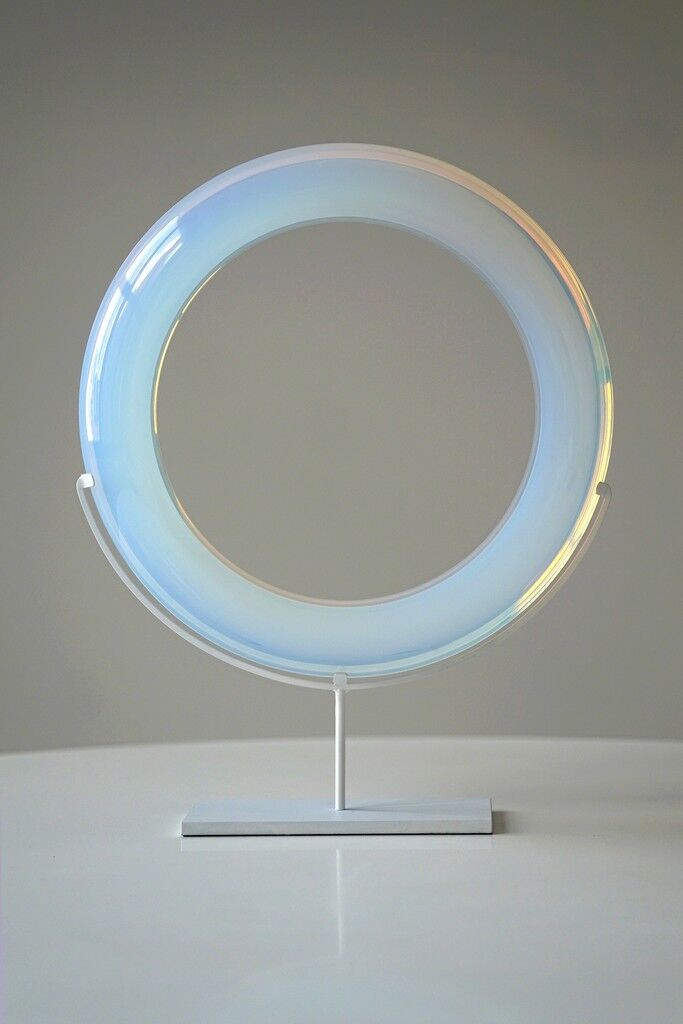 Mariko MoriOneness Ring, 2014. Friends Seminary: Benefit Auction 2017
Like in rhythmic gymnastics?
MAIMUNA: Yeah, it reminds me of a hula hoop. And it reminds me of the thing when people get stuck in the water, then you pull them out.
PEYTON: Oh, the life preserver.
WALKER: It reminds me of a circus, like how the animals—tigers—jump through the hoops. And they put fire on it.
What do you think the artist was trying to convey?
TEDDY: I think that symbolizes someone being very brave and strong, because the yellow and blue make it look like someone’s feeling strong and also very happy.
MAIMOUNA: Well, to me, it looks like a ring, except bigger, way bigger. And also it could look like a bracelet.
HUNTER: I’m guessing he just got married. It’s a she, actually, Mariko Mori.
HUNTER: If you put a big diamond on the top, that could be an engagement ring.
Do you know what a wedding band symbolizes?
HUNTER: You stay together forever. It never ends.
Exactly. So, as a group, you don't seem to have a strong preference between abstract art and more representational art.
PEYTON: I love when people make pictures about things that don't matter, but it just looks nice.
So, sometimes some art can appeal to you just visually, and then other things, like Art Makes People Powerful, are more about the emotion or the message?
ALIYAH: My grandpa works in the National Gallery of Art in Washington, D.C., and he takes me to visit all the paintings. There are abstract ones and there are normal ones. I tend to like the normal ones a little bit better, because I can't make too much sense of the abstract ones. But I do like both of them, and he shows me around the museum. They have some awesome pieces.
Does anybody else like going to museums or galleries?
WALKER: I do. When I go to them, I feel like I’m away from my normal life.
HORATIO: There are lots of galleries on my block, and I go to some of them. There’s one that always has kind of weird and, like, out-of-the-blue things. Once they had put eyes in the wall, and they would, like, blink and move.
PEYTON: I’ve been to this exhibit at the New Museum, and its name is the New Museum. It’s kind of weird, because I usually have to explain that to people, because they’re like, “What? What’s that new museum?” So, I went to the exhibit, where—this is a little weird—but the artist made a chandelier out of underwear. It sounds weird because it rhymes. But she seriously made a chandelier and used underwear.
CHILDREN: Ewwwww! Is anybody here interested in becoming an artist?
PEYTON: Me! I want to be an artist, a singer, a dancer, an actor, a baker. That would be like a multi-life.
ALIYAH: I have my sights set on being a singer or a baker. I do like to make art. I usually do animals. My horses don't ever come out so good, though. They’ve got weird noses and stuff.
HORATIO: I maybe want to be an artist. I really like drawing with pencils.
WILLIAM: Well, I want to be an athlete, but after I retire, I’ll probably be a coach and you have to make up plays, so it’s kind of like art.
Because you’re thinking about figures in space, right?
WILLIAM: Uh-huh.
TEDDY: So, I’m not really wanting to be an artist, but maybe I would just work with an artist, like, give him good ideas. And if an artist gets sick, I might want to be a substitute artist.
PEYTON: Like a vice president.
TEDDY: Yeah, like a vice artist.
Explore Friends Seminary: Benefit Auction 2017 and bid on more than 60 artworks to support financial aid and other priorities at NYC's oldest continuously co-educational school. Preliminary online bidding closes on March 9th, at 4:00pm ET.
Share
../../../components/articles_grid/view.coffee