Beyond Painting: The Experimental Techniques of Max Ernst

“Like every consequential modern painter, Max Ernst has enforced his own madness on the world.” —Robert Motherwell

The Art Genome Project
By Jessica Backus
Dec 30, 2014 12:10pm
Trenchant, cruel, ironic, sarcastic, and poetic—such is the mercurial practice of the German-born, perennially nomadic Max Ernst. Ernst’s own biography highlights the tumult of the early 20th century: he fought in World War I, was condemned for his art by the Nazis, was interned in a prison camp and escaped to the U.S. with the help of art patron and collector Peggy Guggenheim. A man of his time, Ernst understood the urgency in making sense of the modern world, not through old strategies of truth-seeking, but through an embrace of the irrational, chaotic, unknowable, and otherworldly—he was particularly drawn to the alternative reality offered by dreams. He embraced their ultimate impenetrability, and this quality of open-ended meaning characterized his approach to artmaking at large. 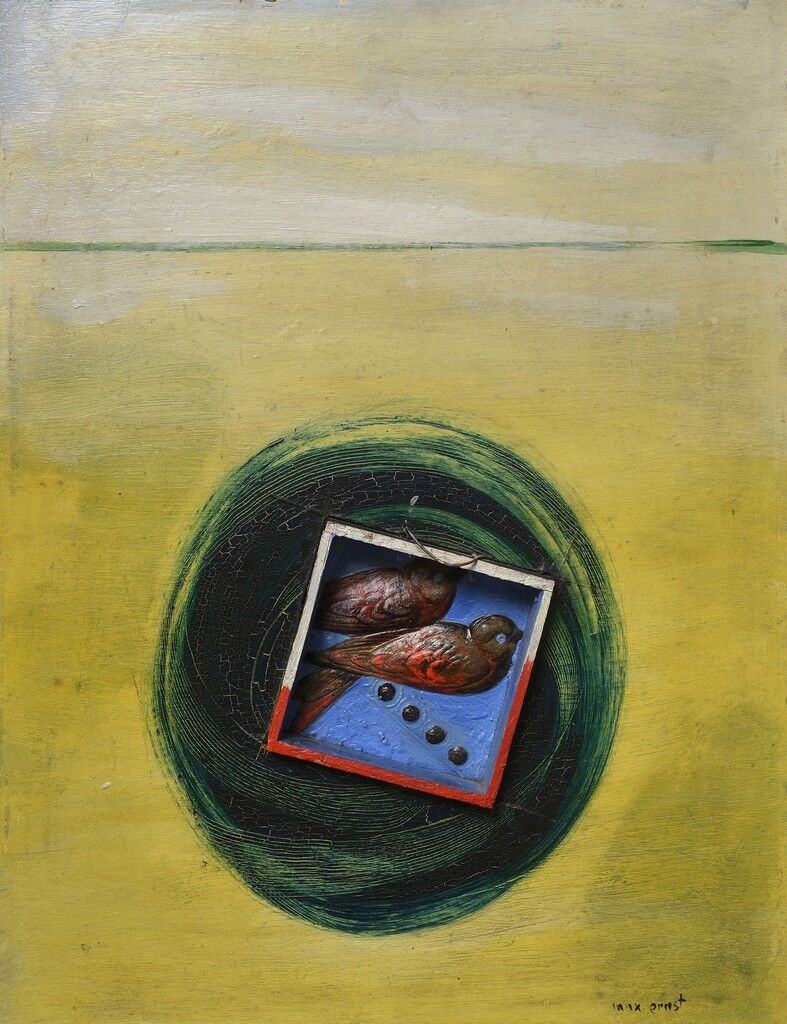 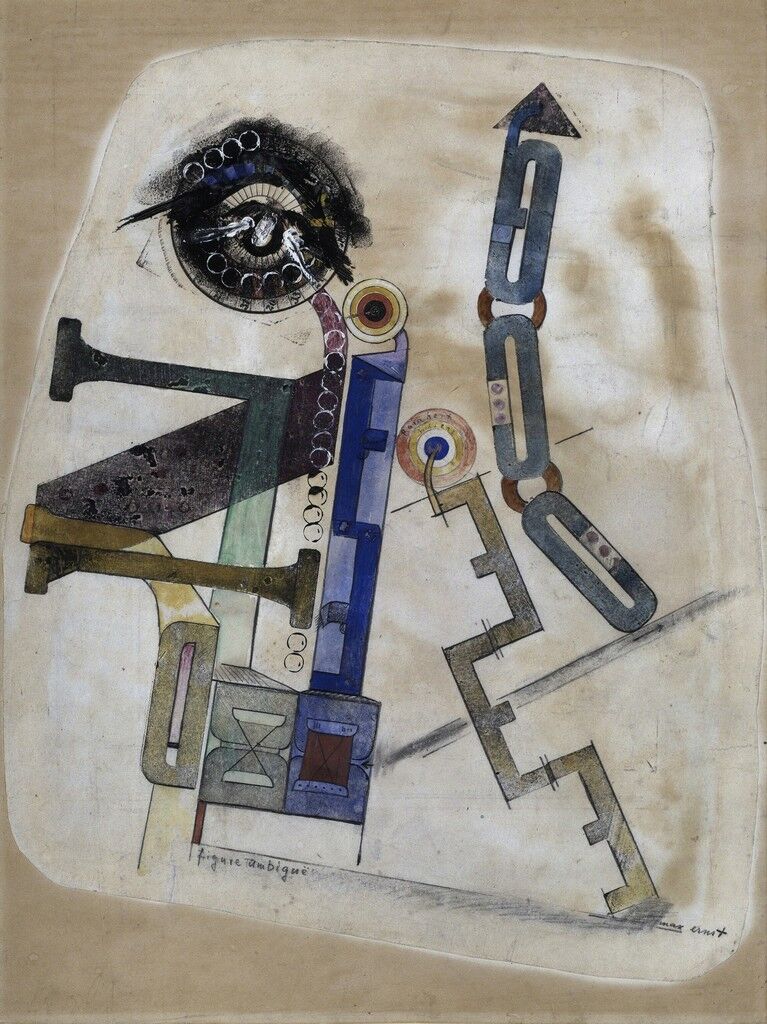 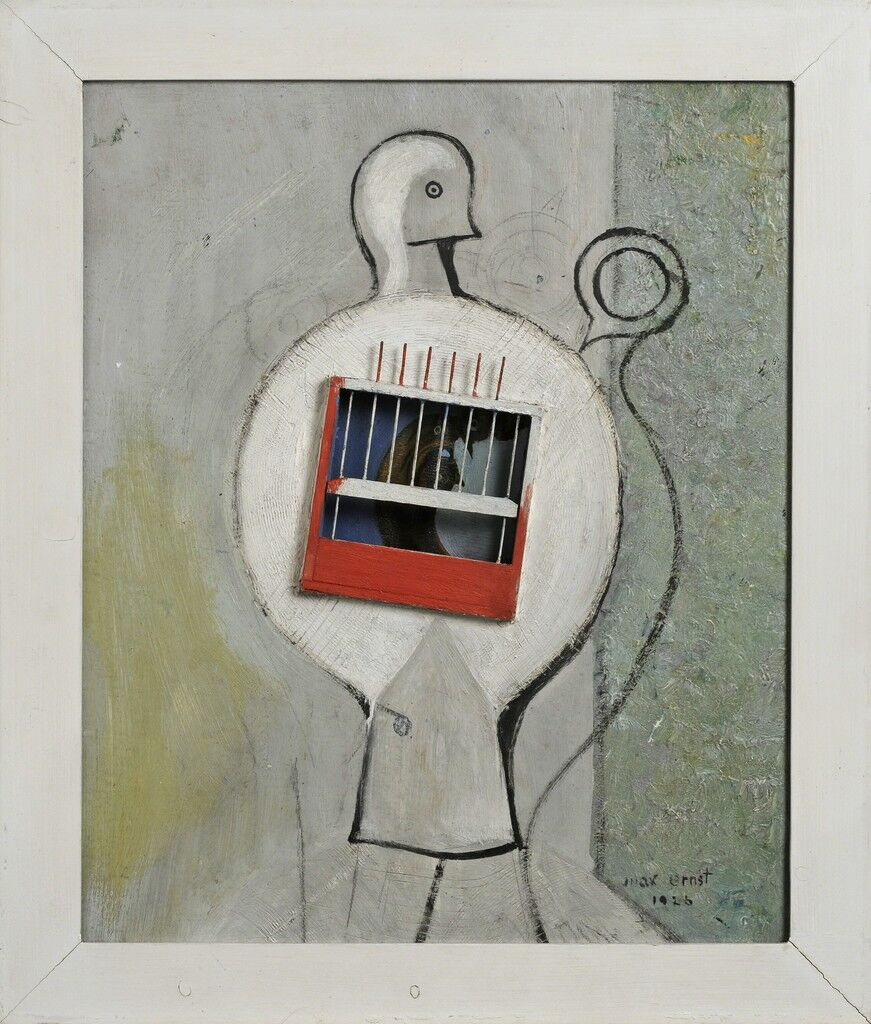 Max ErnstLa colombe avait raison , 1926. Galerie Natalie Seroussi
This is where Ernst’s exploration of a diverse set of techniques comes in. By the end of World War I, in 1918, it was clear that the old means of making art—painting and sculpture—had become inadequate for expressing the urgent concerns of the day. The Dada movement, the Cologne chapter of which Ernst had founded, explored performance, poetry, innovative exhibition design, and collage as a way to catalyze collision and reconfigure the world as it stood. Beginning in 1919, Ernst began exploring what he called “beyond painting” (“au-delá de la peinture”). His first forays into this new realm involved collage, a technique other Dada artists like Hannah Höch and John Heartfield were also using. It’s easy to forget just how radical this technique was—it smuggled the lowbrow visual culture of magazines and the street into the hallowed realm of art, and brought disparate imagery into odd juxtapositions to reveal, as André Breton put it in his preface to La Femme 100 têtes (on which more below), “veritable slits in time, space, customs and even beliefs.” Writing about his first collages, Ernst explained in his autobiography (Biographical Notes. Tissue of Truth—Tissue of Lies, Cologne: 1962) how he brought together images “so remote that the sheer absurdity of that collection provoked a sudden intensification of the visionary faculties in me.” These images conjured “visions of half-sleep” and lovemaking. (An undercurrent of Eros suffuses Ernst’s work, and he liked to think of these conjoined contradictions as a metaphor for copulation.) When a group of his collages were exhibited in Paris in 1921, a number of later Surrealists found inspiration in them. 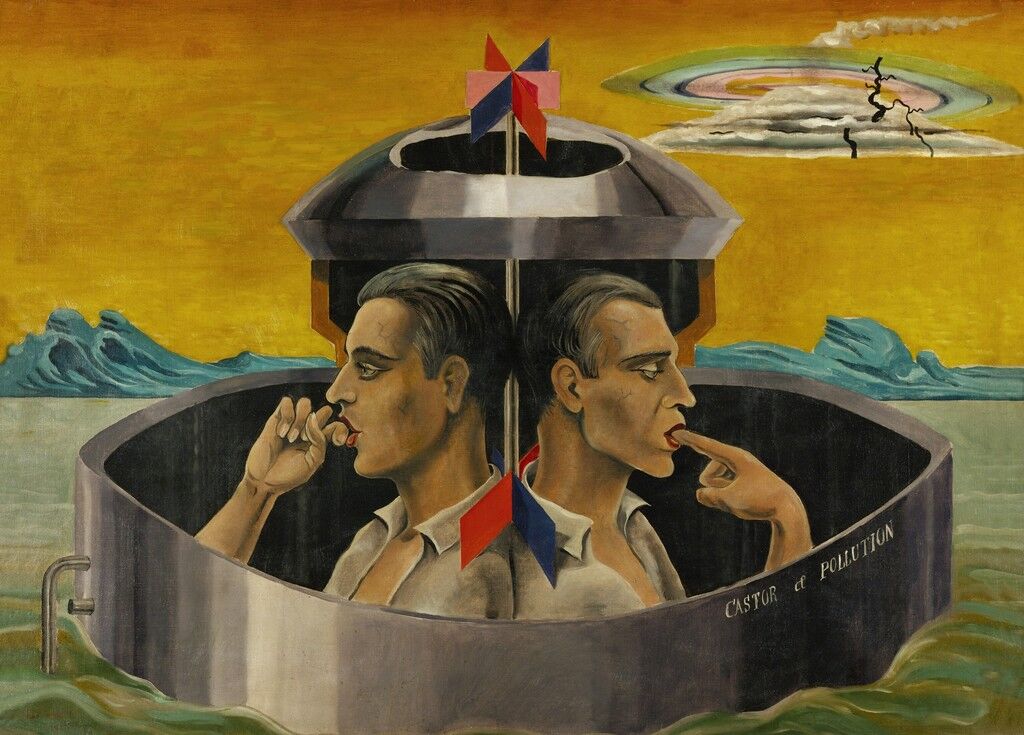 Max ErnstCastor and Pollution, 1923. Private Collection, Vienna
Ernst did not stop at collage; in 1929 he created what is generally regarded as the first collage book, titled La Femme 100 têtes, a collection of late 19th-century woodblock prints, which he modified by adding stylistically similar visual interventions. Each collage was accompanied by an absurd caption (e.g. “Her smile of fire will fall on the mountain sides in the form of black jelly and white rust” or, as in the case of the work pictured here, “And volcanic women lift and shake their bodies’ posterior parts in a menacing way”). The book as a whole reads like a Victorian melodrama in which the order of the scenes has been jumbled and then filtered through a dream, and even Dorothea Tanning, who translated it into English, conceded in her translator’s note that she had yet to exhaust its meaning. André Breton, never one to shy away from bombastic proclamations, wrote in his introduction that removing these visual objects from their normal circumstances elevated them to a transcendent realm, reminding us of the possibility of other possible worlds “where former lives, actual lives, future lives melt together into one life; the life utterly depersonalized.” He credited Ernst with no less than widening “the modern field of vision.” 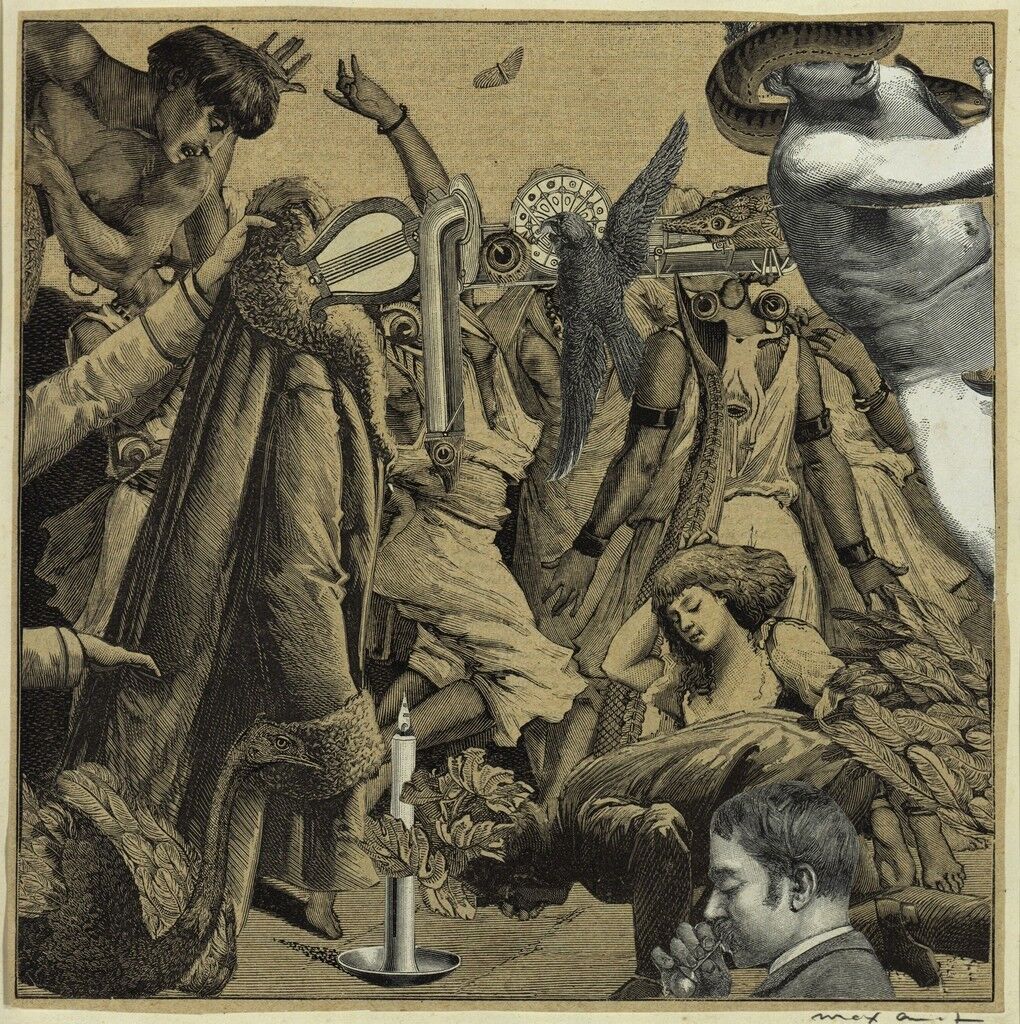 Max ErnstWomen reveling violently and waving in menacing air, 1929. Sammlung Scharf-Gerstenberg, Staatliche Museen zu Berlin, Berlin
In 1925, Ernst began using the technique of frottage, which involves laying a sheet of paper over a textured surface and rubbing it with charcoal or graphite (the same process can be used to create a rubbing of a coin or an engraved surface). Ernst would typically use textured surfaces as passages in a larger composition. He also employed a sister technique, called grattage, in which an object is placed under a piece of paper, which is then covered with a thin layer of pigment. By scraping away the pigment one reveals a colorful imprint of the object and its texture. The painting Snow Flowers (1929) was created using both frottage and grattage. 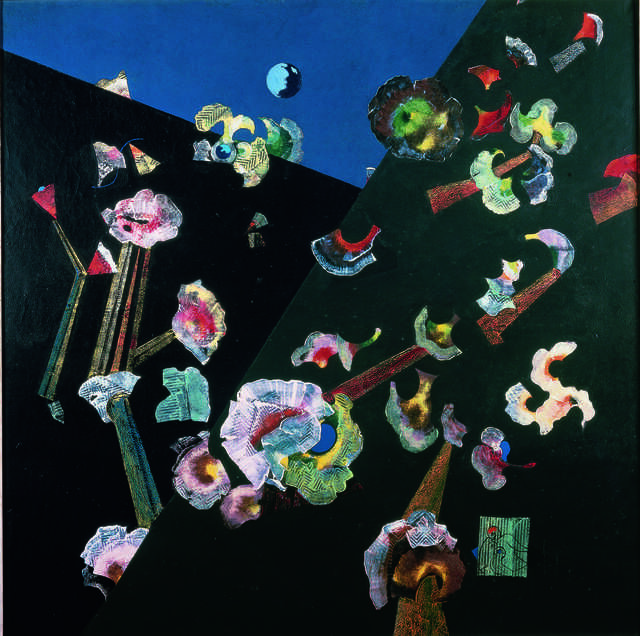 Max ErnstFleurs de neige (Snow Flowers), 1929. Fondation Beyeler
A final automatic technique used by Ernst is that of decalcomania, in which a piece of paper or glass is laid over a painted surface and then removed. This action creates suction, pulling at the paint to form a scaly, biomorphic texture. Ernst’s best-known work to employ this technique is Europe after the Rain (1940-42), an eerie reflection on World War II as the Nazis ravaged the continent. Ernst was personally swept up in the terror; his work had been condemned by the Nazis as degenerate, and he was interned in a prison camp. It is here, in 1940, that he began work on this painting, completing it in 1942 after escaping to the U.S. The rain inferred from the painting’s title seems to have passed, leaving behind a post-apocalyptic jungle. The juxtaposition of the sunny blue sky with the horrors on the ground is almost cruel. There is a sense that we are left amongst the few survivors of a deluge of Biblical proportions: the last inhabitants kept alive on an ark—a situation analogous to that of the newly exiled Ernst. 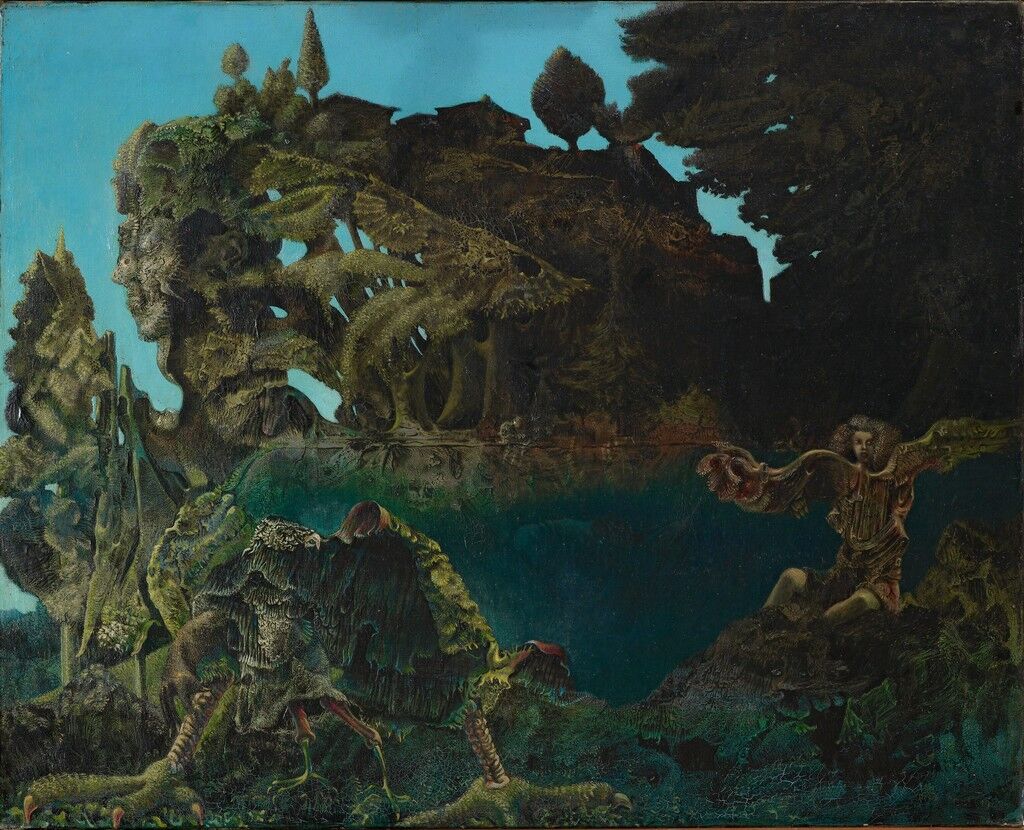 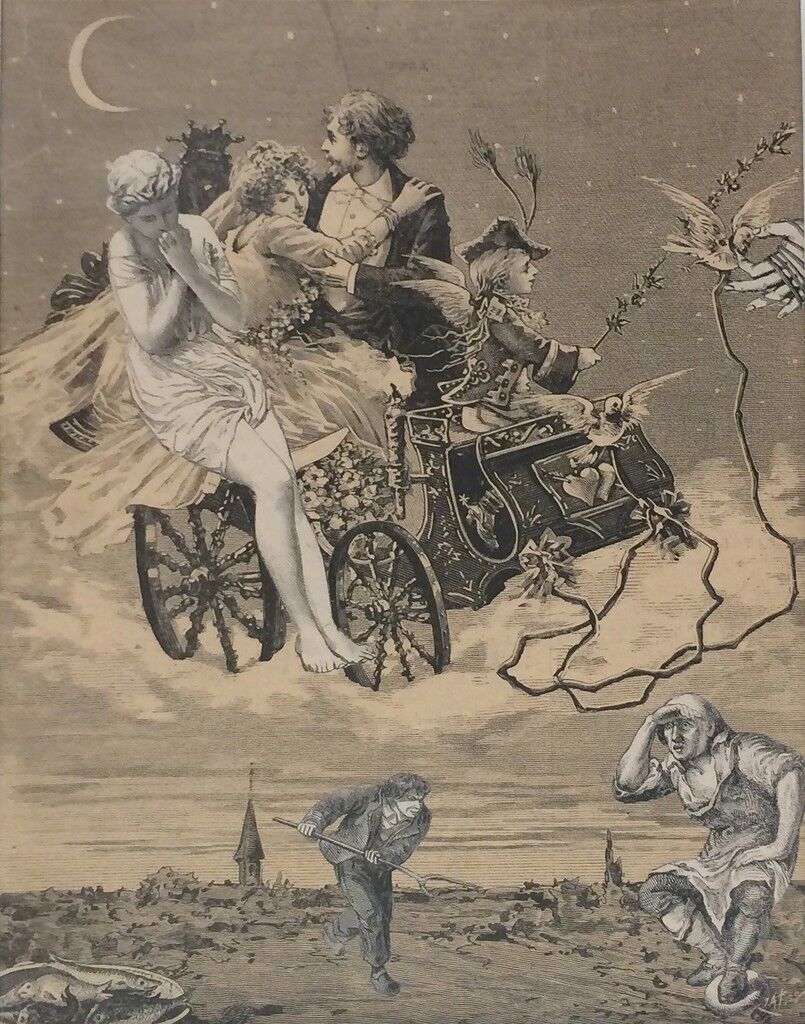 Max ErnstL'esprit de Locarno , 1929. Galerie Natalie Seroussi
Ernst continued experimenting with techniques until his death in 1976; he created numerous sculptures, contributed a section to Hans Richter’s experimental 1947 film Dreams That Money Can Buy, and in the mid-1940s had been experimenting with a painting technique he called oscillation, which involved puncturing a hole in the bottom of a can of paint, and then swinging the can around to create curving skeins of paint. This technique has been cited as influential in the development of action painting (see e.g. Jackson Pollock). Throughout it all, he still considered himself a painter, however compelled he was to constant re-invention. Writing in the third person, as he was wont to do, he has said: “A painter is lost if he finds himself. Max Ernst considers his sole virtue to be that he has managed not to find himself.” In his embrace of chaos, absurdity, irrationalism, and any composition that could defy interpretation, it’s no surprise that his enigmatic oeuvre has made him one of the best-known, yet least understood, artists of the 20th century.
—Jessica Backus
Follow Max Ernst, Dada, and Surrealism on Artsy.
Share
../../../components/articles_grid/view.coffee