The Art Genome Project
By Jessica Backus
Dec 30, 2014 12:09pm
In an era in which painting was being redefined at every turn, German artist Max Beckmann approached the medium with unwavering resolve. Like many early 20th-century vanguards, he found affinities with non-conformist, avant-garde groups, in his case the Berlin Secession and the Expressionists. What set him on his own course, however, was that he spoke out lucidly and critically about each circle. Dead-set on pursuing his own vision, in 1913 he even seceded from the Secession, founding the “Free Secession” along with Max Liebermann, Lovis Corinth, Max Slevogt, and Paul Cassirer. Throughout his multi-decade career, he lived in many cities: Leipzig (where he was born in 1884), Berlin, Frankfurt, Paris (in exile), Amsterdam (also in exile), St. Louis, Missouri, and, finally, New York, where he died in 1950. But perhaps no city is as emblematic of his work as Berlin, about which, in the years following World War I, he produced two of his most famous print portfolios. 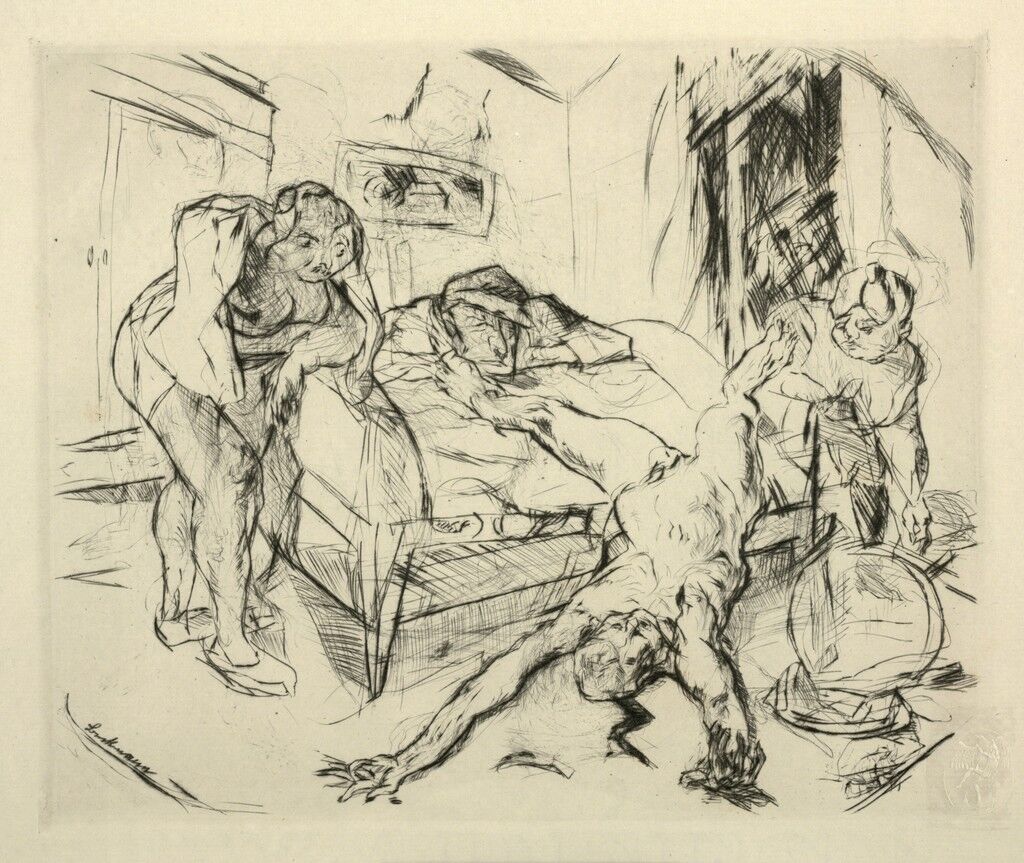 Max BeckmannMurder (Mord), plate 31 from Visions of Shakespeare (Shakespeare Visionen), 1918. Dallas Museum of Art
The first important portfolio Beckmann produced was titled Hell. Published in 1919, it captured the political tumult of the immediate post-World War I period. Like many of his generation, Beckmann served in the war (as a medical orderly) and, after a nervous breakdown, returned to Frankfurt in 1915 a different man. He found a country devastated, economically and politically unstable, and populated by shell-shocked and mangled ex-soldiers. Cities were growing at unprecedented rates, and in the unrest following the war, they became powder kegs. After four years of trench warfare, Germany witnessed a six-month-long revolution in its own streets, culminating in democratic elections. Beckmann’s series Hell captures the sense of tension in the city leading up to the elections. It includes such images such as Malepartus, which depicts wealthy individuals oblivious to the political unrest and suffering outside; as well as and semi-documentary scenes, such as one featuring the street demonstrations of the November Revolution. 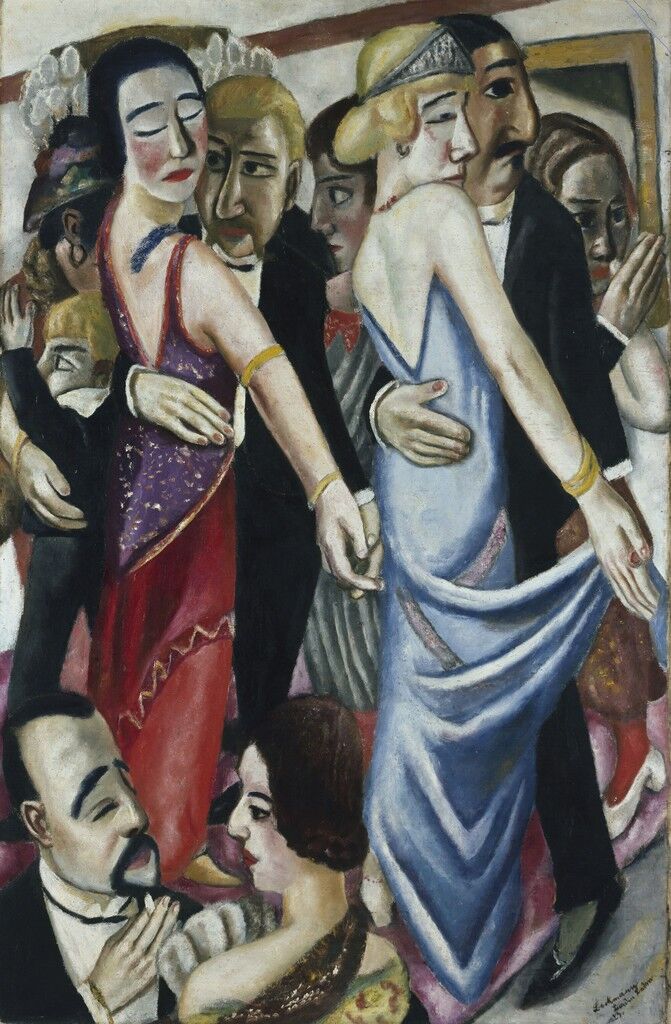 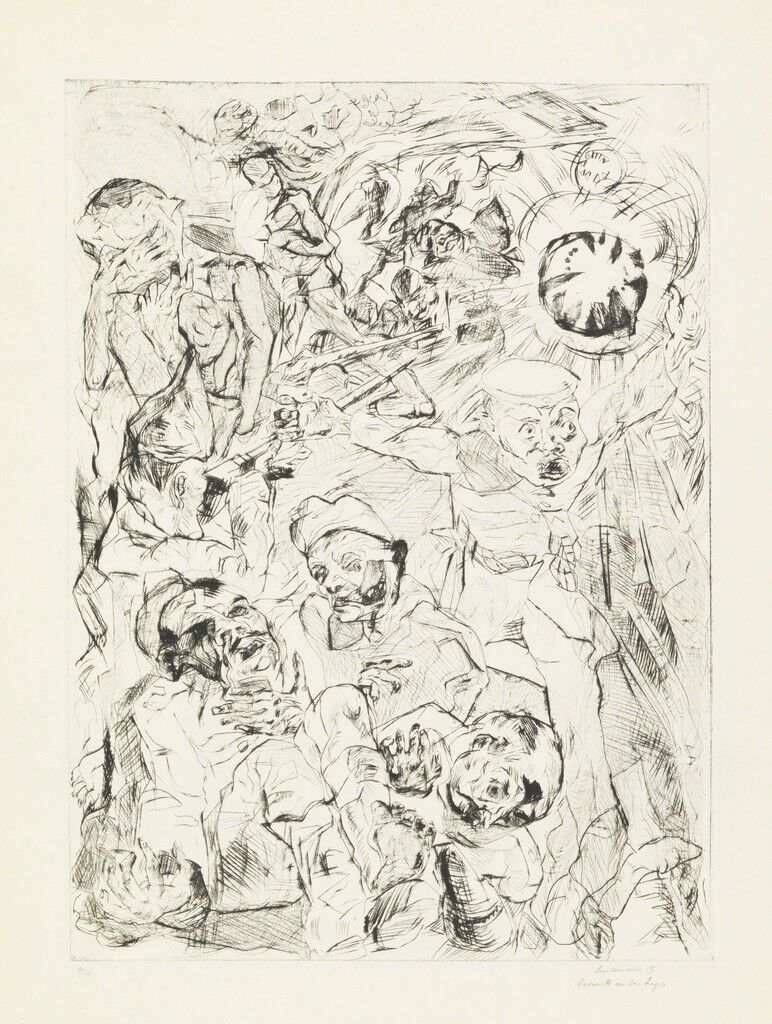 Max BeckmannDIE GRANATE, 1914. Jörg Maass Kunsthandel
Beckmann’s series follows a broader trend toward graphic prints, portfolios and illustrated books. In this politicized climate, parties proliferated, artists who had been political before the war became activists, and their skills were employed in organizing and creating election posters. Visual culture—in the form of advertising, illustrated magazines, film—was coming into its own, and artists were on the frontline. George Grosz’s “Ecce Homo” suite (1923), or Otto Dix’s series “The War” (1924) offered an unflinching view of humanity. Like his contemporaries, Beckmann, who produced some 80 percent of his 347 known prints between 1911 and 1924, approached his art as a form of cultural criticism, chronicling the swiftly changing urban fabric around him and satirizing the extremes of contemporary society. 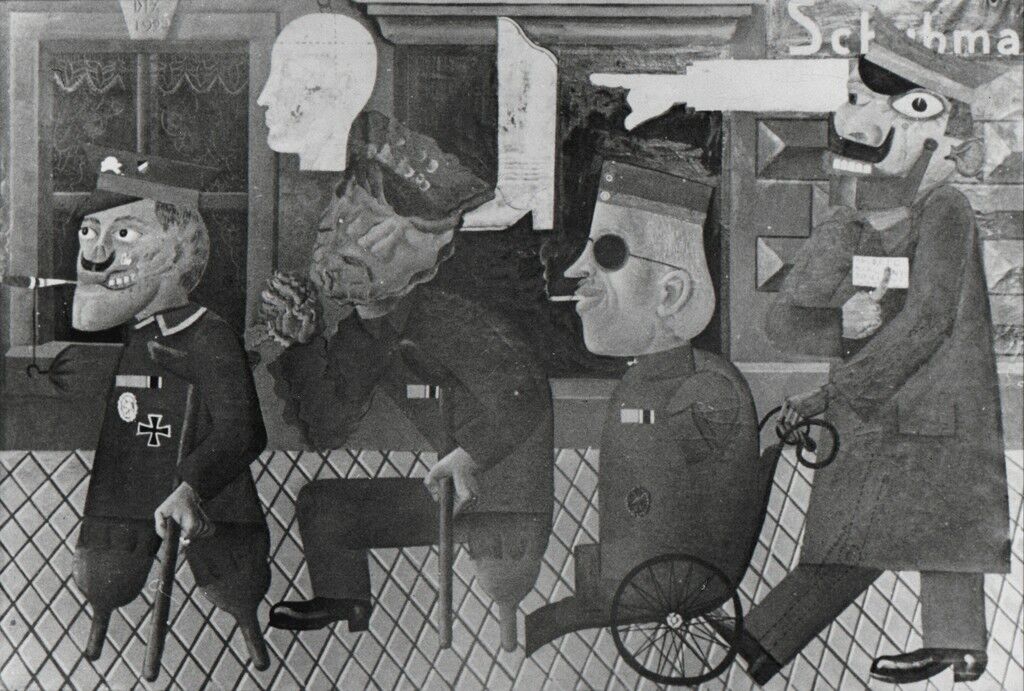 Otto DixWar Cripples (45 % Fit for Service), 1920. Lost Work
In 1922, still living in Frankfurt, Beckmann published his graphic cycle Trip to Berlin. On the cover, Beckmann appears in front of an advertising column bearing the title of the portfolio.  What follows plunges viewers into a fantastical, loose narrative that reads like a graphic novel. We first encounter him alone in his hotel room, in a moment of solitude before the adventure begins. Vignettes of the city at night ensue; a visit to a disillusioned family seated around a table, a strip tease at a café, down-and-out beggars, and the high life of a theater lobby. 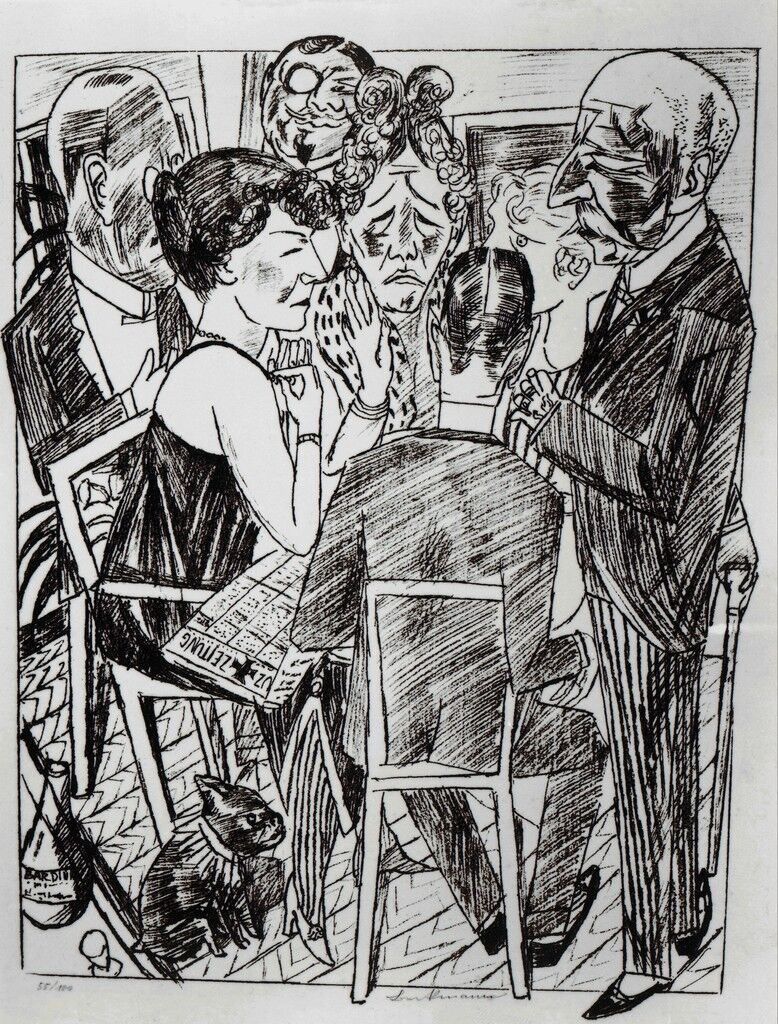 Max BeckmannThe Disillusioned I, 1922. Kupferstichkabinett, Staatliche Museen zu Berlin, Berlin
Though produced only a few years after Hell, Trip to Berlin was created during a period of rapid change. Between 1919 and 1925, the city’s population more than doubled from almost two million to over four million—more populous than it is today. The pace of urbanization was staggering. A new nightlife was emerging and cultural commentators decried the seedy underbelly of Berlin, overrun as it was with ex-servicemen, prostitutes, cigarette sellers, sausage vendors who fronted cocaine dealers, opium dens, and fat-bellied, uncouth nouveau riche. Beckmann’s Trip to Berlin represents a subtle shift from the torment and political action encountered in Hell, revealing the absurdities of a society marked conversely by obscene decadence and abject deprivation. 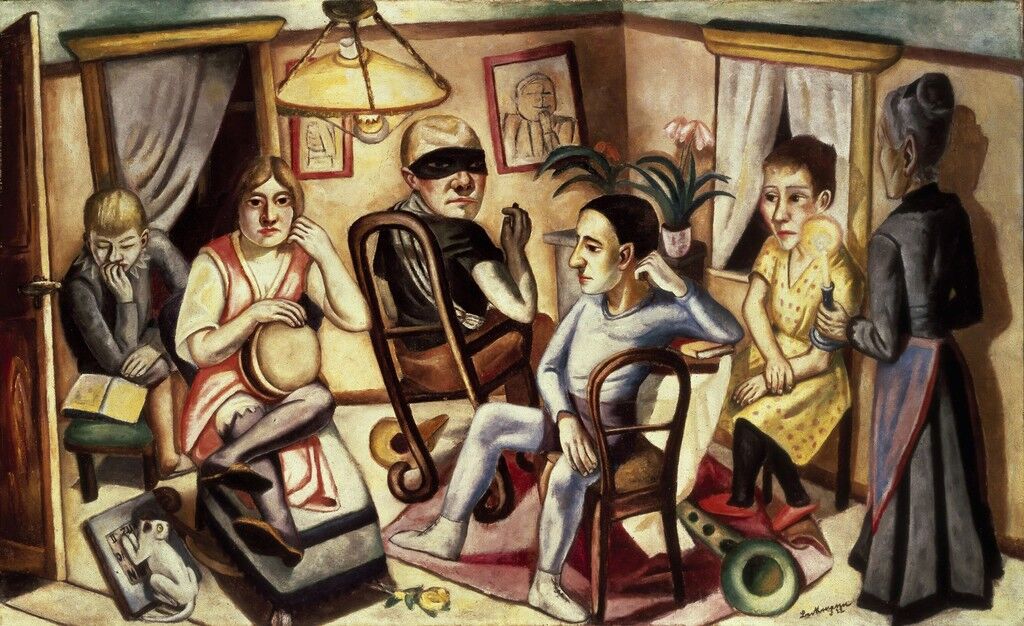 Max BeckmannBefore the Masked Ball, 1922. Staatsgalerie Moderner Kunst, Munich
Beckmann’s commentary on Berlin was more bizarre and tortured than that of his compatriots. It lacked the acerbic humor of Grosz’ caricatures, for one, and his fragmented, angular style, with its dark contour lines, belies a certain formal seriousness—a probing interest in complex stylistic problems: “I paint and try to develop my style exclusively in terms of deep space, something that in contrast to superficially decorative art penetrates as far as possible into the very core of nature and the spirit of things,” he once said. The critic Julius Meier-Graefe, in 1924, already recognized the stakes of Beckmann’s formal experiments. He described the painter’s aesthetic, with his figures’ drawn-out faces and fractured limbs, crammed into a claustrophobic composition, as a visual metaphor for the “mechanized bête humaine, the boxed-in existence of living beings.” Beckmann’s images of the city were about much more than just the city. He wrote, in 1918: “I need to be with people. In the city. That is just where we belong these days. We must be part of all the misery that is coming…We must love humanity… I love its meanness, its banality, its dullness, its cheap contentment, and its oh-so-very-rare heroism.”
—Jessica Backus
Share
../../../components/articles_grid/view.coffee