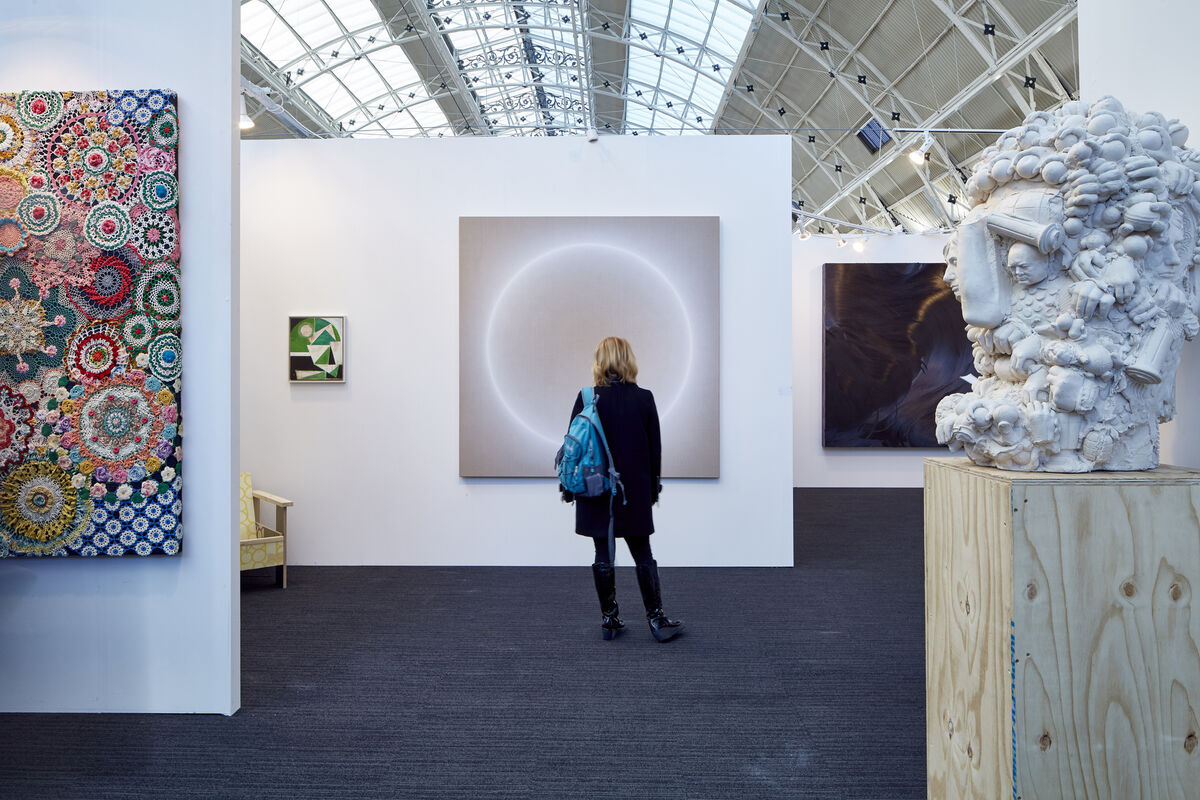 The 29th London Art Fair, the UK’s premier Fair for Modern British and contemporary art, will be the most international edition to date when it returns to the Business Design Centre, Islington, from 18-22 January 2017. The Fair is renowned for providing a supportive environment for collectors of all levels, enhanced by an engaging programme of curated exhibitions, talks, tours, films and performances.

With art spanning the early 20th century to the present day, London Art Fair 2017 sees 129 galleries present museum quality Modern British art alongside the very best international modern and contemporary art. Over one fifth (22%) of this year’s exhibitors come from outside of the UK, with galleries from 18 different countries including China, France, Germany, South Korea and USA.

New features and highlights for 2017 include:

·              A museum partnership celebrating the 10th anniversary of The Lightbox, Woking, with a curated exhibition of highlights from The Ingram Collection entitled ‘Ten Years: A Century of Art’

·              Art Projects ‘Dialogues’, curated by Miguel Amado, a series of five collaborations between galleries intended to encourage new forms of presentation and foster relationships on a global scale

·              ‘Stranger Collaborations’ a showcase of artistic collaborations formed via the internet, curated by Pryle Behrman in the Art Projects Screening Room

Museum Partnership: The Lightbox presents highlights from The Ingram Collection

The Lightbox, Woking, is the museum partner of London Art Fair 2017, presenting major works from The Ingram Collection in a unique exhibition ‘Ten Years: A Century of Art’.

Curated by Peter Hall (Curator, The Lightbox) and Jo Baring (Director, The Ingram Collection) the display will demonstrate the breadth, depth and quality of The Ingram Collection spanning a century rich in artistic innovation and discovery. It will include key works by 20th century artists such as Elisabeth Frink, Henri Gaudier-Brzeska, Barbara Hepworth, Ben Nicholson and Eric Ravilious. With The Lightbox celebrating its tenth anniversary since opening in 2007, the exhibition also introduces a year of major exhibitions at the Woking gallery, beginning with ‘Henry Moore: Sculpting from Nature’ (21 January – 7 May) and ‘John Minton and the Romantic Tradition’ (28 January – 26 March).

Complementing The Ingram Collection in the Modern British pavilion, The Sladmore Gallery (new to the Fair in 2017) will present an overview of Bronze sculpture from 1870 to the present day, explaining the history of bronze and the casting method. Returning gallery Waterhouse & Dodd will debut in the pavilion, exhibiting paintings by Stephen McKenna, whose work is rarely seen in a commercial setting in the UK. McKenna will be shown alongside a new figure painting by his one-time student at Goldsmiths, Michael Taylor, whose painting ‘Boy with Apple’ was commissioned by Wes Anderson for The Grand Budapest Hotel.

A notable number of UK and London based galleries also represent international modern and contemporary artists, including a focus on South Korea from Skipwiths and Hanmi Gallery. The latter will present South Korean artist Jaye Moon’s sculptural street art, formed from LEGO blocks, at locations throughout the Business Design Centre.

Other contemporary highlights include curiosities from The Hanbury Collection and Knight Webb Gallery, which will exhibit a line-up of contemporary female artists, featuring Alison Jackson, Juliane Hundertmark, Heide Hatry, and Lesley Hilling. Parasol unit foundation for contemporary art will return to present limited edition artworks by international contemporary artists including Tschabalala Self and Boy & Erik Stappaerts.

To celebrate the America’s Cup, TAG Fine Arts will be exhibiting a brand new exhibition of artworks by artist Ewan David Eason at The Princess Hamilton Hotel, Bermuda, opening in April 2017. Eason has used gold leaf to meticulously recreate maps of Auckland, Bermuda, Lorient, Osaka, Portsmouth, San Francisco, Shanghai and Stockholm – the eight cities sponsoring a ship in the race.

Art Projects is a curated showcase of the freshest contemporary art from across the world and with galleries from outside the UK making up two thirds (61%) of exhibitors, the 13th edition is also the most international to date. Represented artists also come from a diverse selection of countries including Greece, Germany, Japan, France, South Korea and Zimbabwe. Highlights for 2017 will include large- scale installations, solo shows and thematic group displays; alongside an accompanying programme of collaborative film and new media initiatives.

For the second year De’Longhi, the UK’s number one manufacturers of premium bean to cup coffee machines, return to London Art Fair 2017 as sponsor of the Art Projects Artist Award. One artist exhibiting in Art Projects will receive a cash prize of £2,500, assessed on the merit of their practice and work displayed at the Fair.

A major feature of Art Projects is ‘Dialogues’; five collaborations between galleries intended to encourage new forms of presentation and foster relationships on a global scale. Now in its fourth year, the 2017 edition has been curated by Miguel Amado, Senior Curator at Middlesbrough Institute of Modern Art, UK. The featured artists address the issues of our times, looking at history, race and collectivity alongside explorations of imaginaries, representation and subjectivity.

The selection includes galleries based in distinct parts of the UK – from London to the regions – alongside galleries from Dublin, southern Europe, the interior of the United States and sub-Saharan Africa.

Highlights include First Floor Gallery (Harare), Zimbabwe’s first international, independent, contemporary artist-led gallery presenting a glimpse of contemporary urban Africa through the work of four artists, and ‘The Garden’, a radio-inspired sound-art work by Graham Fagen, who represented Scotland at the 56th Venice Biennale, conceived by Golden Thread Gallery (Belfast) as a 14-18 NOW WW1 Centenary Art Commission. Dialogues will also include the London premiere of C H A I N M A I L Project by Amartey Golding at Jack House Gallery (Portsmouth). This short film, presented as an ethnographic documentary, features the artist’s brother and spotlights inner city subcultures, raising questions about vulnerability and masculinity.

This year’s Art Projects Screening Room, curated by Pryle Behrman, will present ‘Stranger Collaborations’, an exhibition featuring artworks that in some way wouldn’t have been possible without the collaborations formed via the internet, showing how strangers can, sometimes even unknowingly, create an artistic partnership online. A highlight will be the debut of Liz Sterry’s photographic series Drinking Alone with the Internet, which documents a succession of online performances in which Sterry put out an open call for internet users to join her in dressing and drinking like a Star Wars character, creating a virtual party in which everyone is both together and very much alone.

Photo50 is London Art Fair’s annual exhibition of contemporary photography, providing a critical forum for examining some of the most distinctive elements of current photographic practice. 2017’s instalment is ‘Gravitas’, a group exhibition of lens-based works, curated by Christiane Monarchi, founding editor of Photomonitor.

‘Gravitas’ is inspired by the Latin word denoting ‘depth of character’ or ‘solemnity’, and associated with the transition of the ancient Roman youth from boyhood to adult life. The 50 works presented in Photo50 provide a window into the world of adults-in-waiting, framing fleeting moments in their development between childhood and maturity with lived experience and memory.

‘Gravitas’ is supported by Genesis Imaging and will be located within London Art Fair on Gallery Level 2.

Tickets are available from www.londonartfair.co.uk

The full list of galleries in the Main Fair at London Art Fair 2017 is as follows:

The full list of Art Projects and Dialogues galleries at London Art Fair 2017 is as follows: