The Birth of Non-Objective Painting

Artsy Editors
Feb 6, 2014 11:45am
To many,
Wassily Kandinsky
was the greatest force behind the birth of non-objective abstraction, i.e. paintings without any recognizable objects in them.
Pablo Picasso
and
Georges Braque
had explored the limits of making paintings without recognizable objects from the world—such as Picasso’s portrait of the art dealer Ambroise Vollard—yet they never fully entered into total abstraction. Picasso in fact believed that there was no such thing as a wholly non-figurative work. 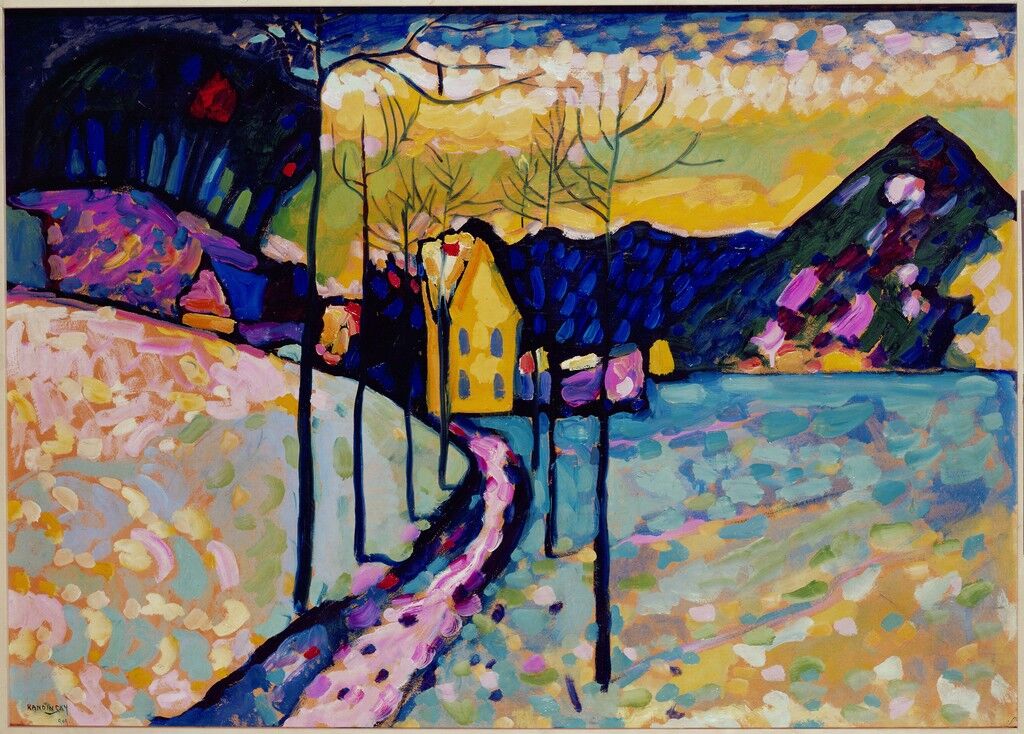 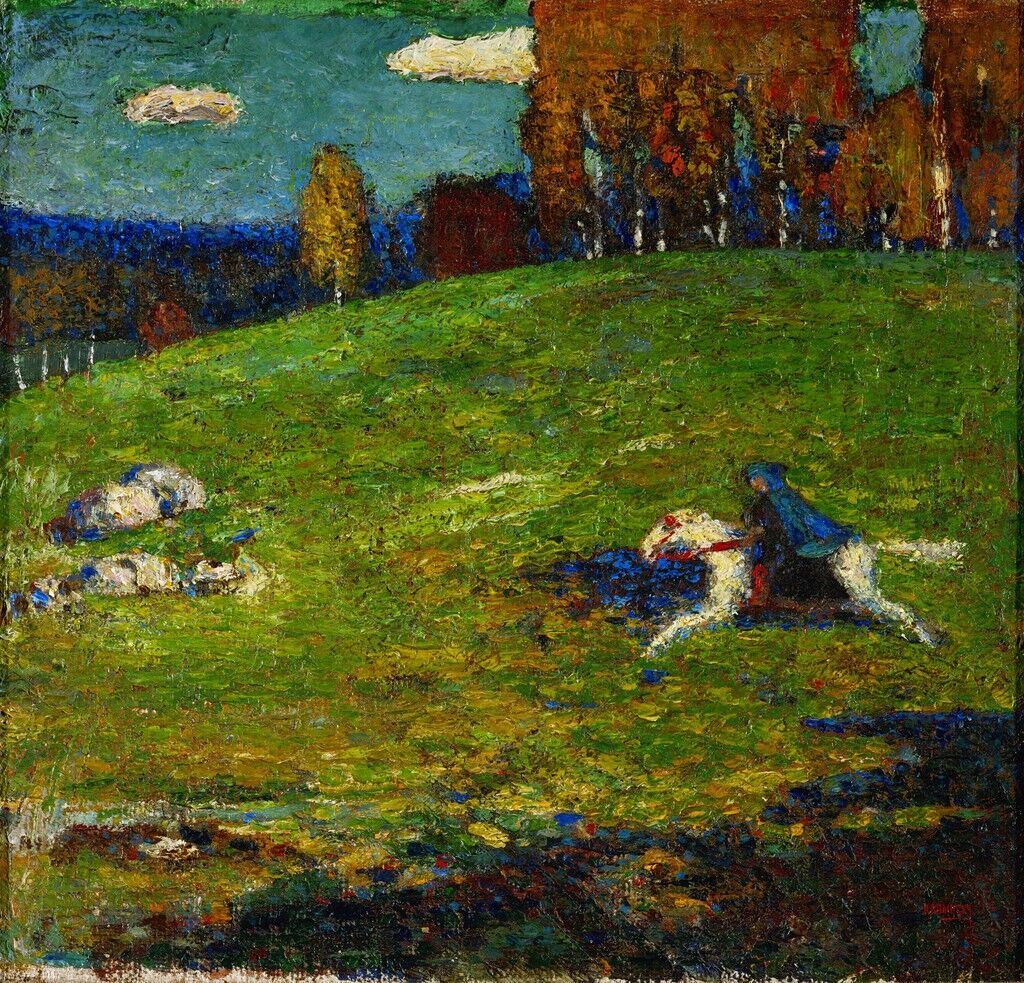 Wassily Kandinsky
The Blue Rider, 1903
Stiftung Sammlung E.G. Bührle, Zurich
Like
Cézanne
, Kandinsky was a late bloomer. He grew up in Moscow and lived there until he was thirty—and in Moscow he wasn’t making art but practicing law. Yet at thirty, inspired by artistic developments in Paris, he decided to leave Moscow and pursue a career in the arts in Munich. In Munich, Kandinsky shone in his classes and he quickly moved outside of the classroom, to form a progressive organization called Phalanx; to teach art independently; and to exhibit his work, which was included in the Berlin Secession, from which he received enough press to be included in Salon d’Automne in Paris, in 1904.
Yet Kandinsky’s works in these exhibitions were deemed minor and were chiefly interesting due to their fairytale narratives and bright colors. See, for example, his Blue Rider of 1903. As a result in 1903 Kandinsky decided to pick up from Munich and travel. This was by no means a brief trip—it lasted until 1908. The point of this long wunderjahr for Kandinsky was literally to take stock of what Western art “had accomplished to that date.” Though Kandinsky’s travels ranged, he spent most of his time in Paris. From the beginning of his re-thinking of painting, Kandinsky became distrustful of any theories regarding the truth or reality in art. In particular, he rooted this distrust in the recent disintegration of the atom, which truly shook him and showed him that any interpretations of reality had to be questioned; for him it also suggested art should be concerned with the mystical, the metaphysical and the spiritual.
Kandinsky started making abstract paintings in 1908. How he arrived at them is a subject of debate. Some believe it was his experience of seeing Monet’s haystack works—whose value he believed was just in their colors and lines. There is also a story of him seeing one of his own works propped up on its side, glowing “with inner radiance,” and realizing that its figurative elements were secondary. During this period, Kandinsky began to call his works Improvisations and Compositions, reflecting his interest in finding a way to parallel the immediately expressive, non-material nature of music in his art. 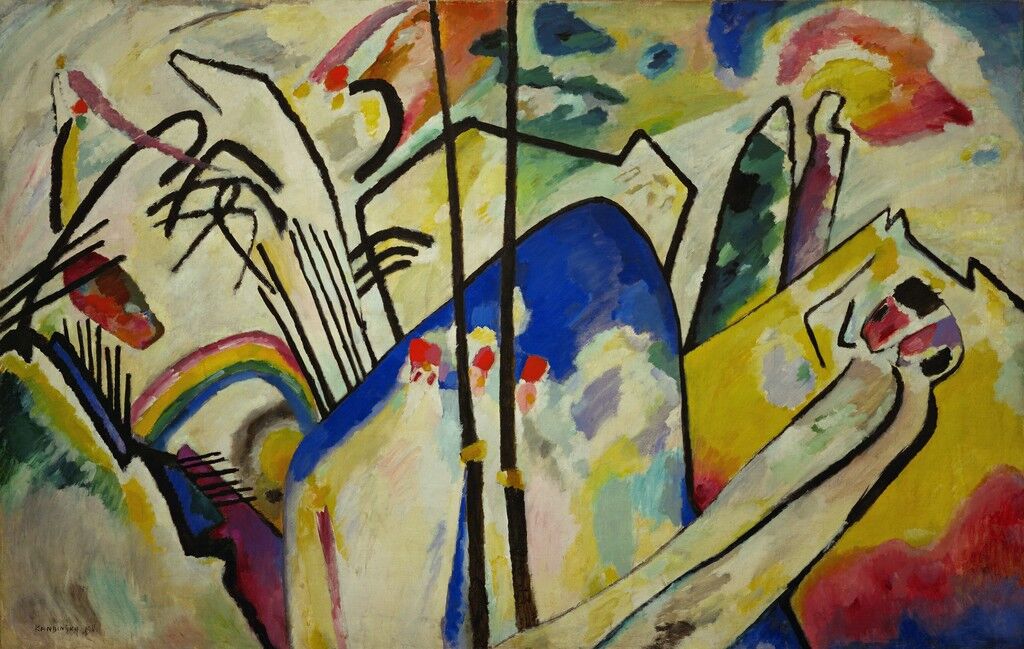 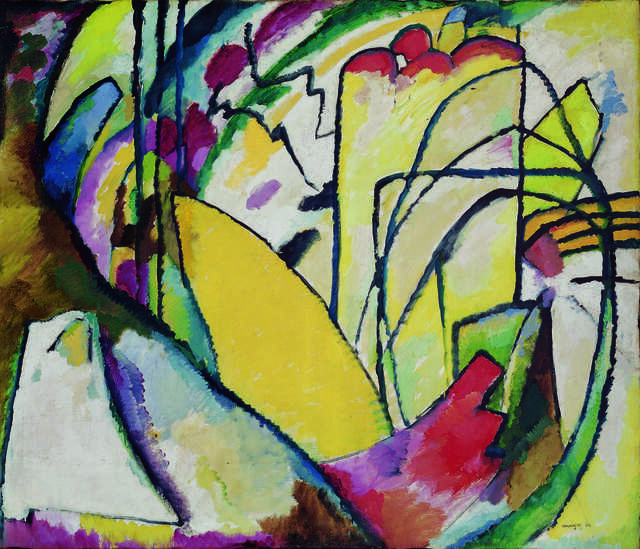 Wassily Kandinsky
Improvisation 10, 1910
Fondation Beyeler
Advertisement
In 1908, Kandinsky exhibited with a group called the New Artists Association—which was influential for him because it included the work of Picasso and Braque; and in 1911 along with Franz Marc, he formed the Blaue Reiter (Blue Rider) group—which debatably took its name from Kandinsky’s earlier painting. The group which sought to emphasize art from all times as well as art that expressed the inner self rather than conform to a particular style. Two out of three of Kandinsky’s pictures in the first Blaue Reiter exhibition in 1911 were non-objective; he had started making such works in 1910. (See his progression towards these works in the paintings and works on paper on the right.) While non-objective works had been done by
Frantisek Kupka
and
Francis Picabia
not much later and
Robert Delaunay
painted his first non-objective color disks in 1912, Kandinsky made them arguably earlier and more importantly, non-objective painting was the basic principle of his work.
In 1912, Kandinsky’s reputation increased with the Second Blaue Reiter Exhibition, and even more with the publication of two books: the Blaue Reiter Almanac, which illustrated the art—it had over 140 images—and ideas of artists associated with the group and Concerning the Spiritual in Art. More than any other single factor, Concerning the Spiritual in Art helped disseminate and foster acceptance of the new principles upon which much of
modern art
developed. It placed Kandinsky at the center of an artistic revolution and presented Kandinsky’s interest in an art that departed from the objective world, and the discovery of a new subject matter based only on the artist’s “inner need.” The section, “About Painting” concerned Kandinsky’s quest for communication apart from nature, based on color perception and sensation. 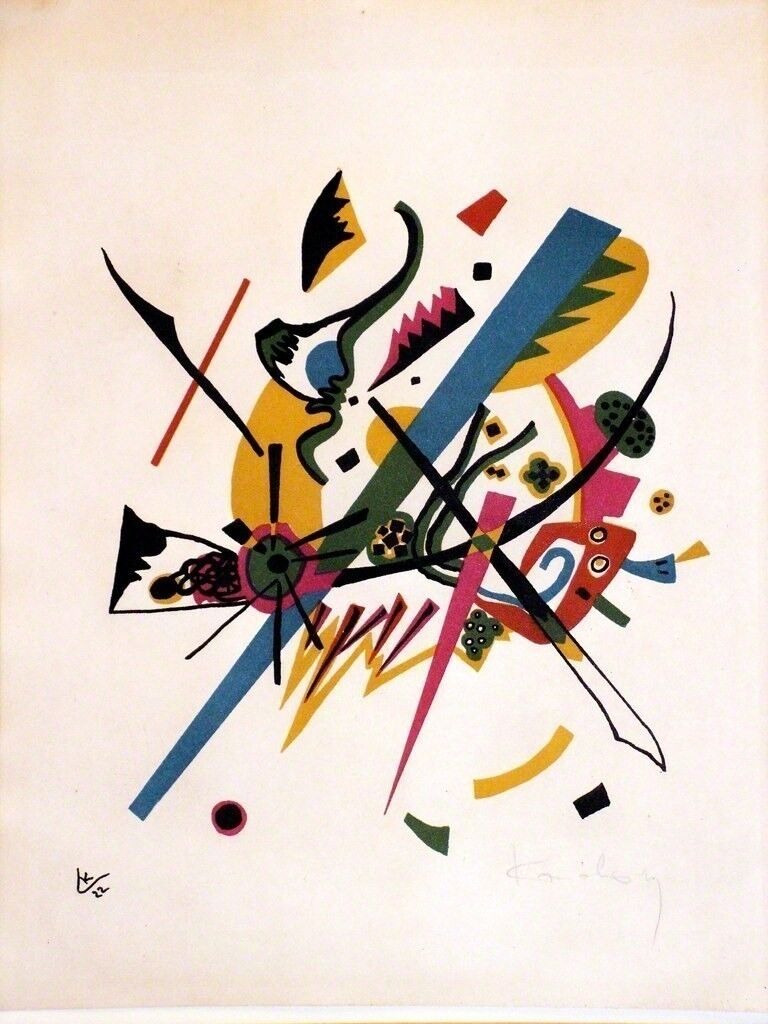 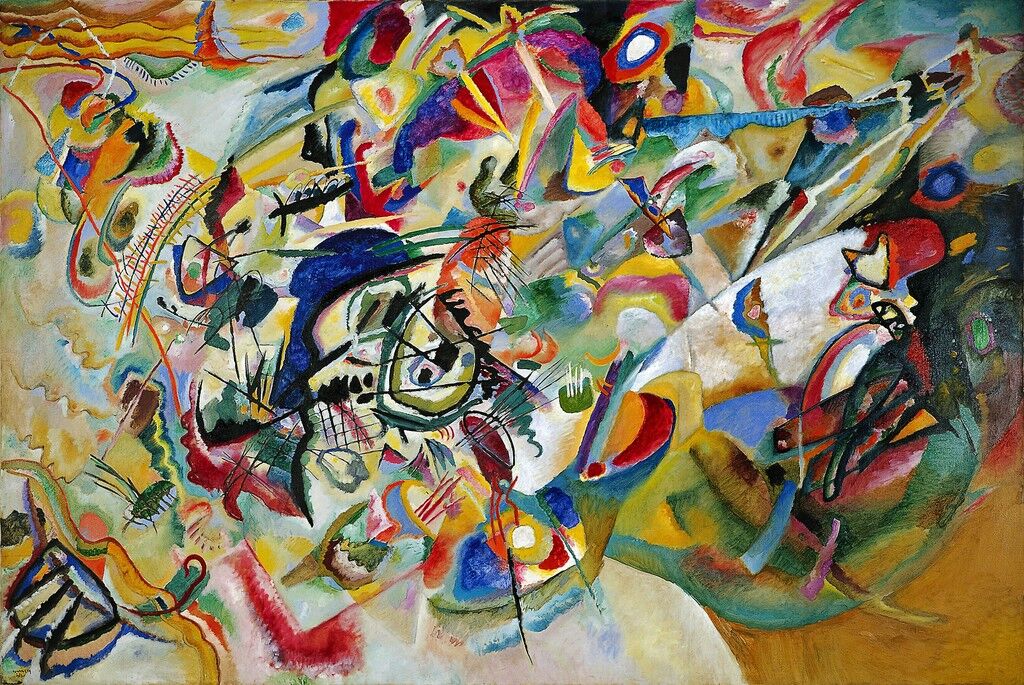 Wassily Kandinsky
Composition, VII, 1913
The State Tretyakov Gallery
Kandinsky considered his Compositions his most complete artistic statements. They differ from the most influential previous attempts at abstraction of this period, principally because they approach it in a much more expressionist and improvisatory way than
Cubism
, which was much more geometric. Accordingly, the artists Kandinsky influenced were somewhat different, such as
André Masson
,
Joan Miró
,
Roberto Matta
and
Jackson Pollock
. In general, the imagery in Composition VII stems from Kandinsky’s interest in cosmic conflict and renewal as inspired by the Book of Genesis’ story of the Deluge and the Apocalypse from the Book of Revelation. Though Composition VII has aspects which can be compared to identifiable objects, such as the boat-like shape with oars on the lower left, Kandinsky sought to obscure all figurative references. He also wanted to produce a painting that gave off a sense of spontaneity. As a result, although he made many preliminary drawings, he only spent four days making the final painting.
Read the next post in this series about Andy Warhol.
Related Stories