Max Schreier
Apr 14, 2015 4:33pm
On the occasion of Art Cologne, Artsy brings four artists from across Europe to collaboratively reimagine the art fair booth. Swedish sculptor Sofia Hultén, based in Berlin, is known for her poetic use of industrial materials; Amsterdam-based David Jablonowski creates work that considers global infrastructures, such as logistics of the food industry, while rarely revealing his own political disposition; Indian and French artist Nadira Husain, who lives between Paris and Berlin, makes paintings and installations that display her struggles with identity—and her expert use of line and color; and Gereon Krebber, native to Germany and a teacher at the Kunstakademie Düsseldorf, produces evocative sculptures that visualize the moment in which they are created and often defy categorization.
While organizing this presentation for Art Cologne, I had the opportunity to speak with three of the artists, discussing their motivations for making work and their influences, both from within and outside of the art world. 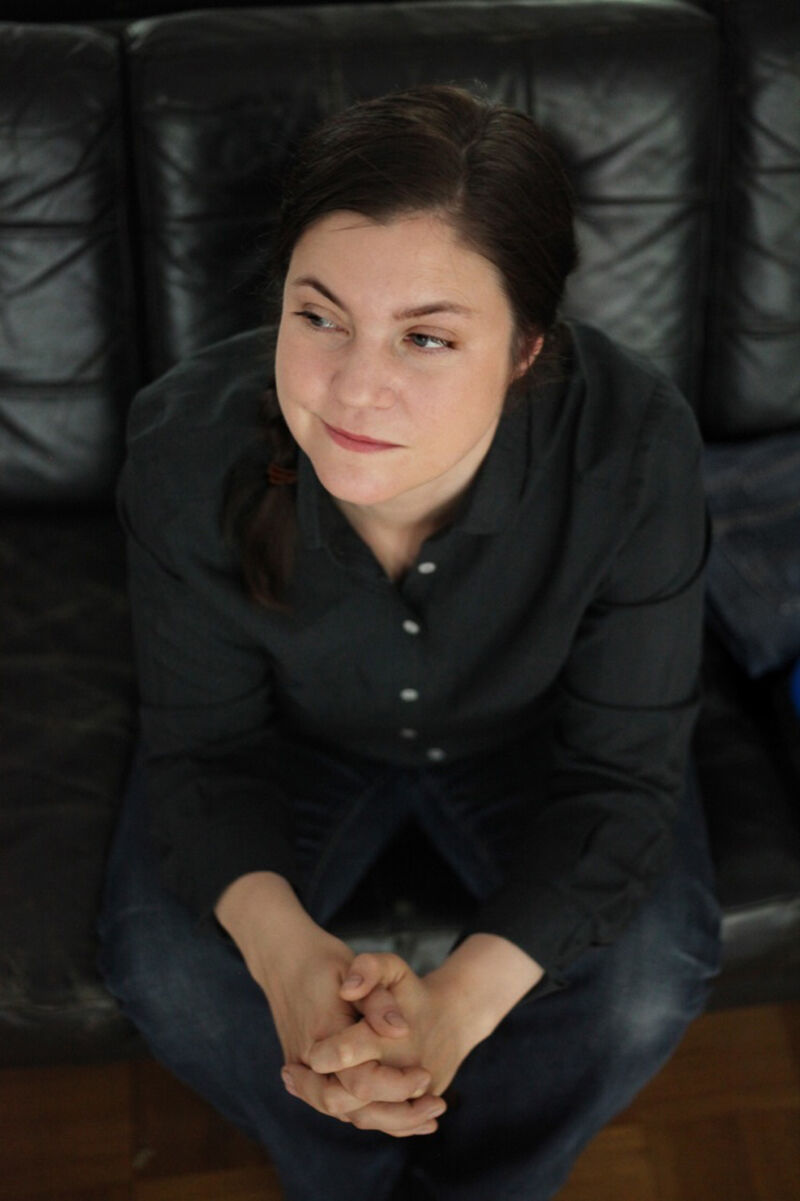 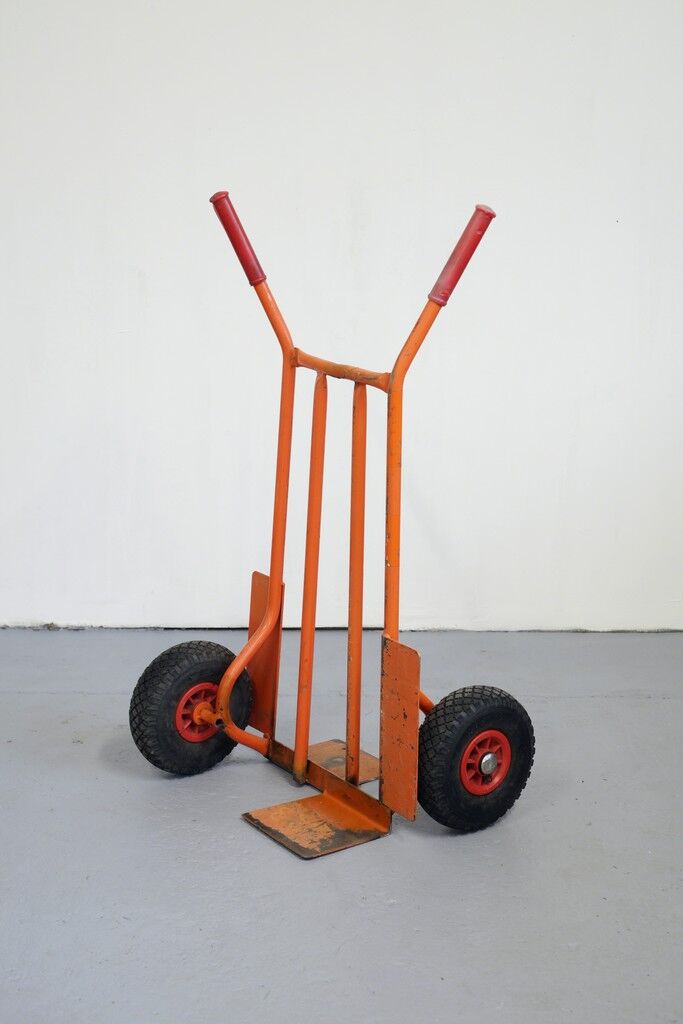 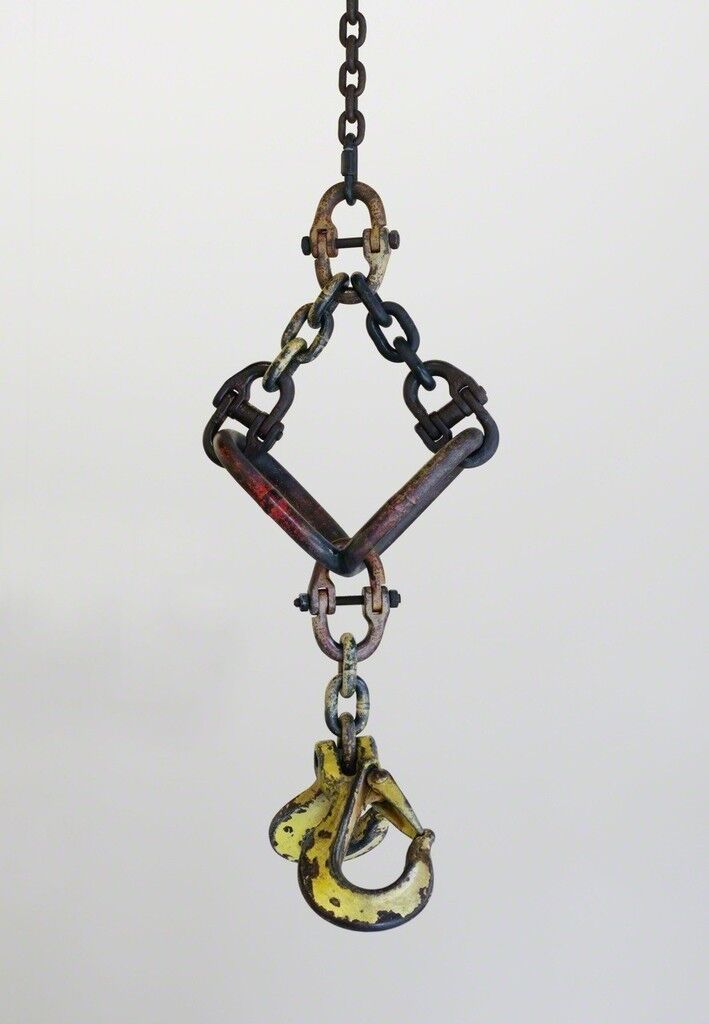 Sofia HulténForking Paths I, 2015. Daniel Marzona
My practice usually begins with a found object of some sort—something I find in the street or I happen upon on the internet. I grew up in Birmingham, UK, which is a metal industry city, and I used to find scrap industrial materials around when I was growing up and the industry was dying out. Today, I find things and keep them in my studio for ages before I do anything with them.
Recently I’ve been inspired by current events. For example, I’m working on these forklift path pieces that have to do with “what if” thinking—“What if that had gone differently? What if it had been like this, instead of like that?”—and making that idea manifest itself. When that cop shot a young black kid in the head in the States, I thought, “What if he’d missed?” I also read a lot of sci fi, which has an equally speculative way of looking at the world.
I’ve been reading about artificial intelligence in the past few months, like the Machine Intelligence Research Institute website, so I’m a bit flummoxed about what might happen in 15 years; I’m becoming a bit of a doom-thinker. Up until this point, my work has been based on physical experience—even the videos, or pieces that are more immaterial, are based around a phenomenological experience. Some of the AI research presents a theory that one is only able to learn through the interaction with the physical world.
It takes me a while to get into a piece of work when I’ve made it; I rarely have an instant rush. A piece I made in 2011, Versions of Events, which is a series of plastic bags and shoes, is one of the only times where I was excited right away. I had the idea in the morning and made the piece in the afternoon. It was one of the first “what if” pieces—“What if you scramble causality so that events are in a different order than they usually are, and what are the physical repercussions of that?” That week, I had stepped in paint, so I had put my trainer in a plastic bag, and noticed I could see the paint through the bag. I was thinking about these different permutations of how things could go, if causality didn’t hold. 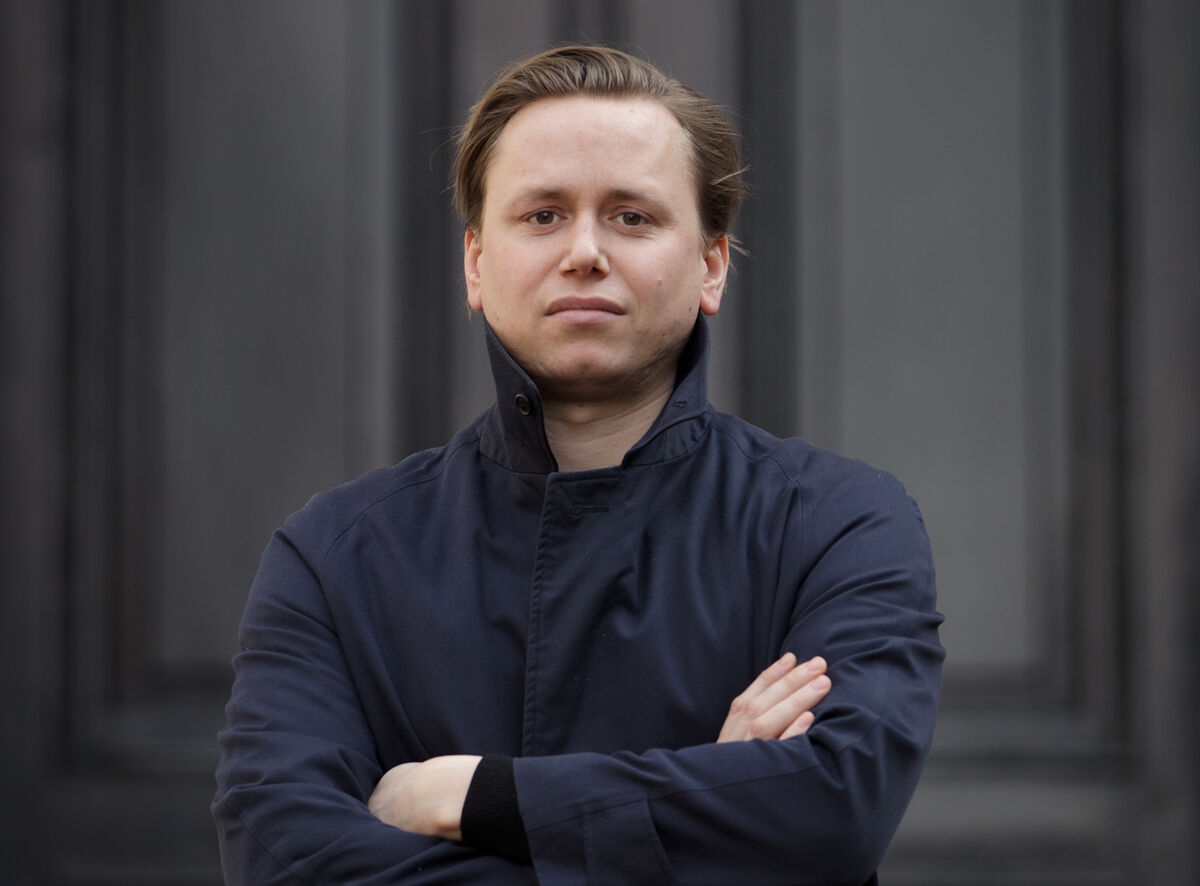 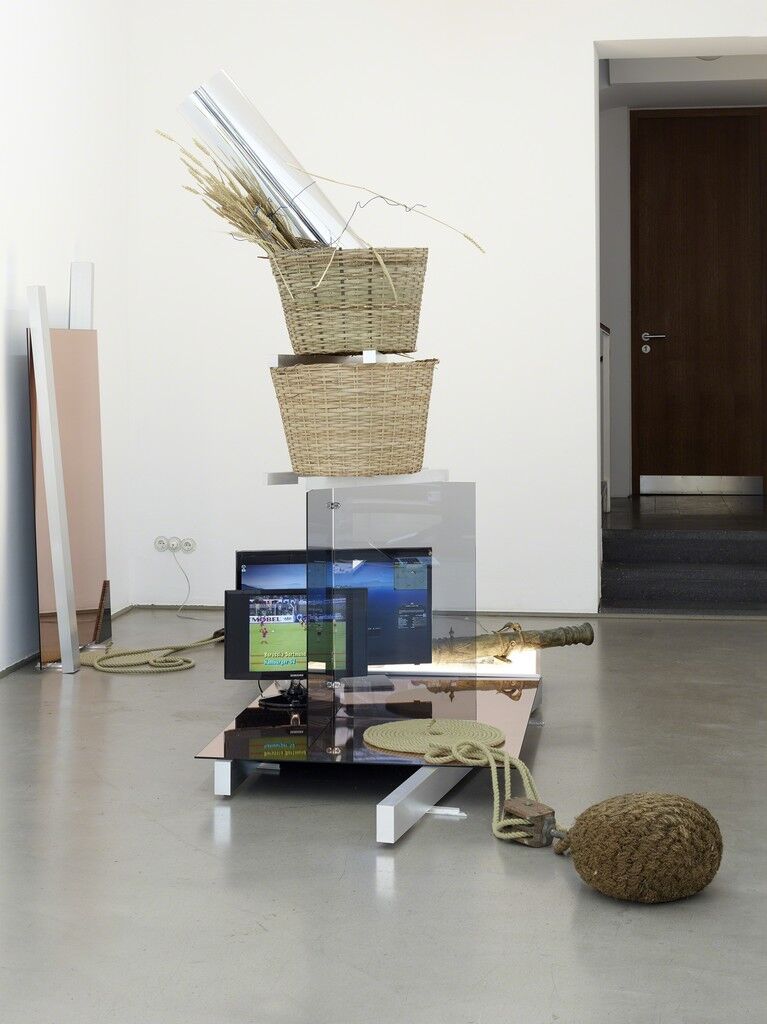 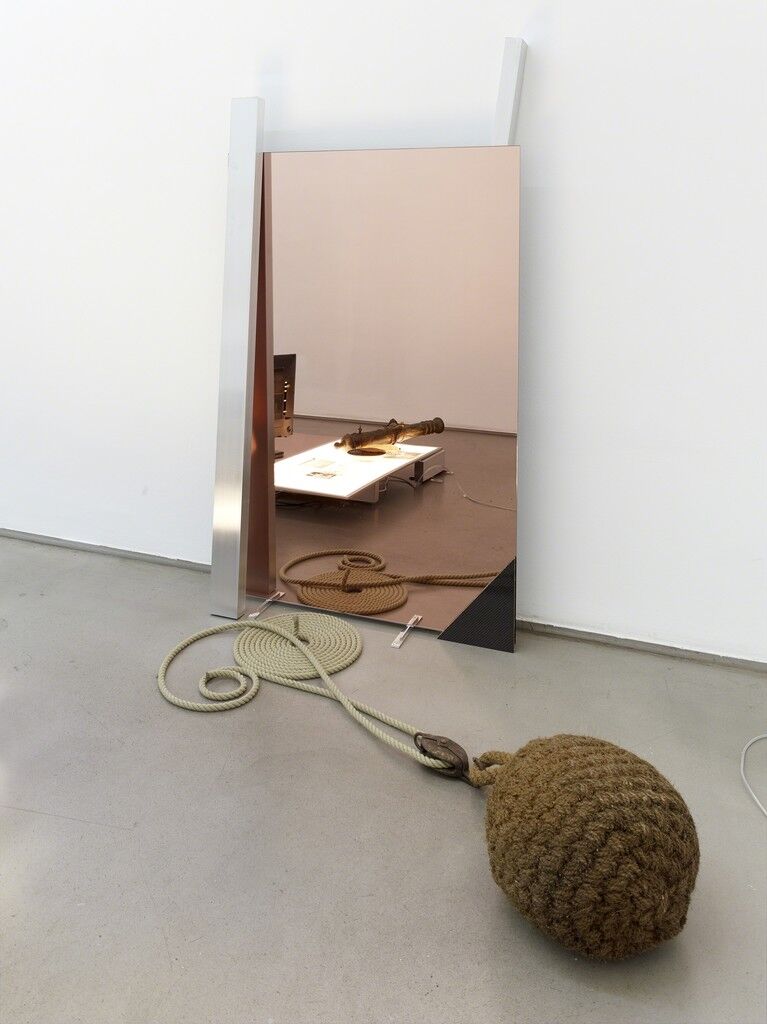 David JablonowskiUntitled, 2015. Markus Lüttgen
I’m working on a show in Rotterdam at the Witte de With about local computing networks and how they have changed certain attitudes. One of the works is an older copy machine that is printing a screenshot of a voucher for sushi—inspired by my research into fake sushi when I was in New York, a geo-specific ad that came up on my computer once I’d returned to Amsterdam, and IBM ThinkPads, which are based on bento box designs.
I have two computers, one with ad blockers and one without. I look at ads as a collage of daily content, and I allow them to influence my algorithms. The porcelain figure in my show at Markus Lüttgen is directly based on research I did on the e-commerce platform Alibaba, on the site it suggests ads based on things associated with what you’re looking at—for example, ads for Chinese porcelain figures based on my search about Egyptian Sphinx figures. I am interested, but at the same time very worried—you feel like you are collaborating with your machine.
I remember my father talking about our generation being totally crazy for sharing our data. He visited me in New York in 2011, and I tried to explain how Facebook works by watching a South Park episode called “You Have 0 Friends.” He thinks it is insane, especially given his experience in 1968 with the student revolution against censorship. I am overwhelmed by the idea of modern-day industries heading towards censorship. I like to look critically at data collecting attitudes, following political discussion in the EU parliament and lobbying in Brussels. 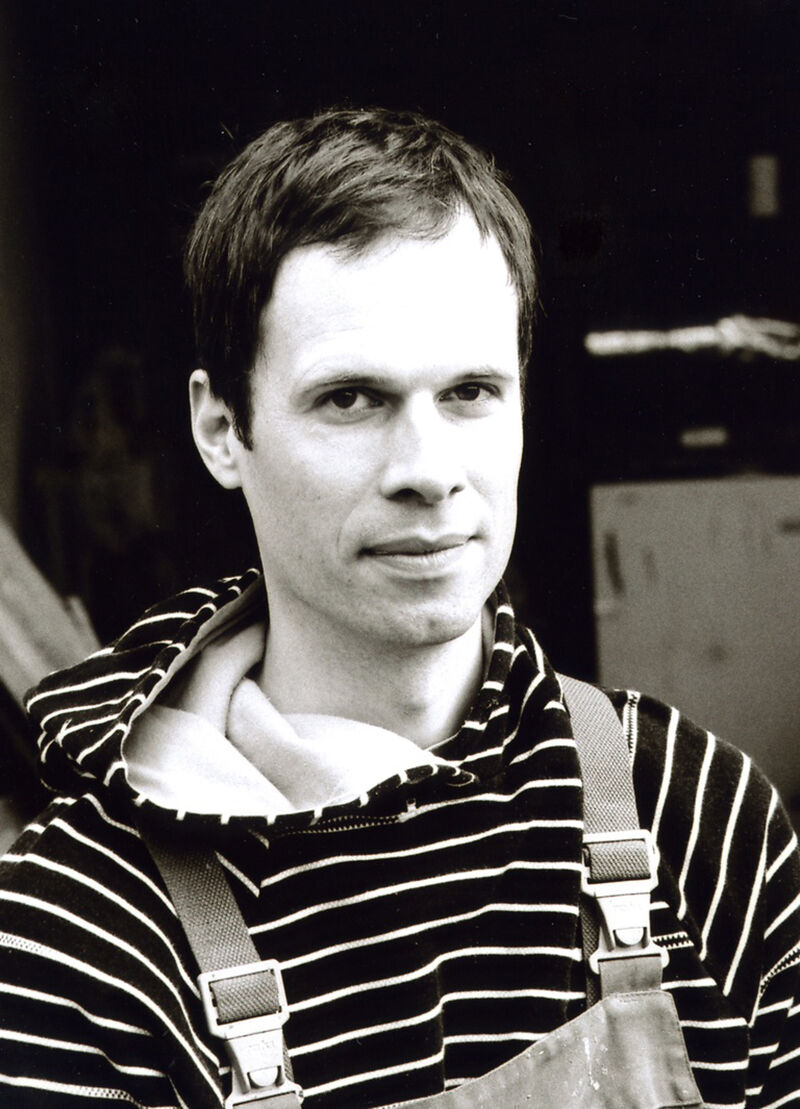 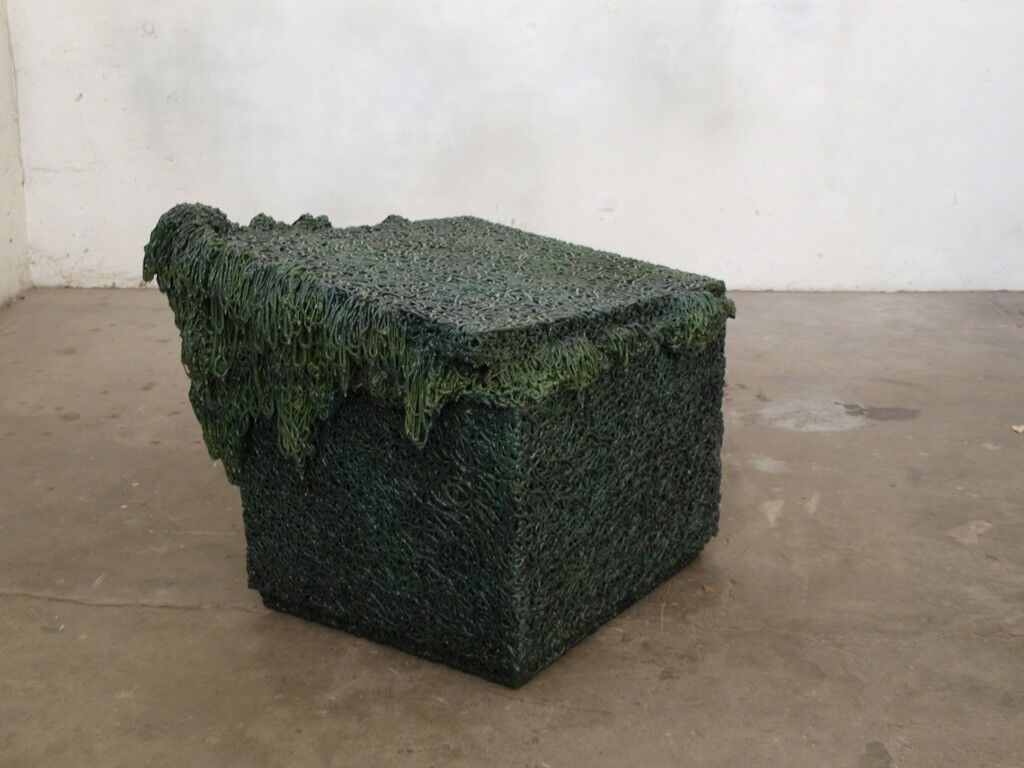 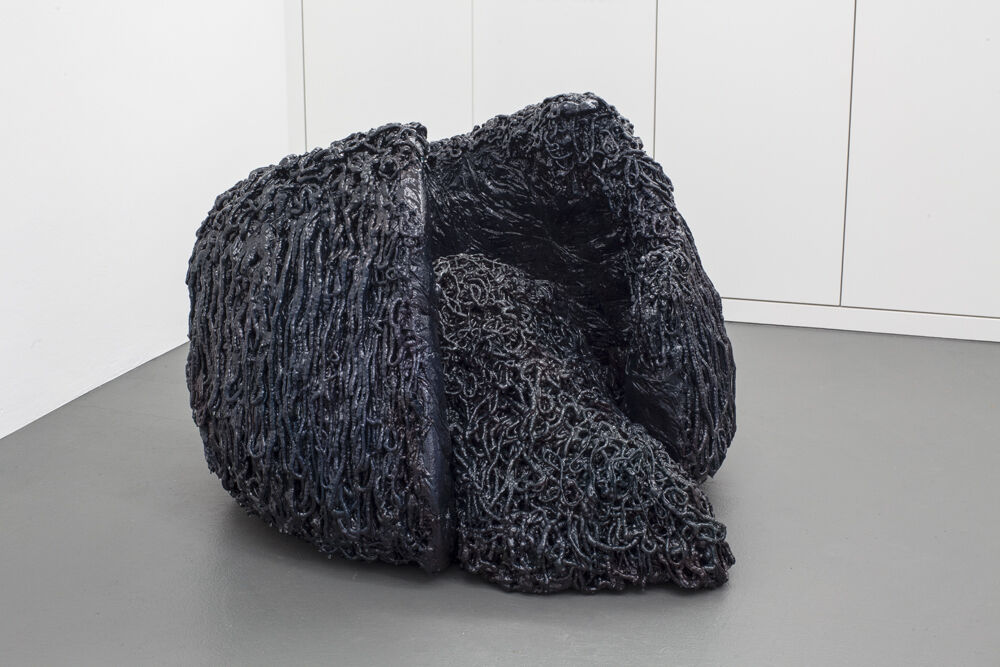 Gereon KrebberCaptcha, 2012. Galerie Christian Lethert
In 15 years time, I will be still in my studio, hopefully—dead or alive. I am a sculptor creating strange things that end up as artworks. On Artsy, you tag my work as “contemporary grotesque.” That fits well as a label. It is kind of eclectic, disparate, misfit, and slightly off-balance, sometimes dystopian, often made on-site, and material-based with a focus on surface, graphical outline, and presence. One of my personal favorite pieces is a small orange cast of jelly in the Kunsthalle Wilhelmshaven alongside a concrete wall, that I made years ago. I still feel very touched seeing photos of it.
We all see the art world diversifying drastically. There are so many different branches now. Contemporary art has grown extraordinarily and shifted from an outsider position to the center of attention. There are many new museums and galleries. The art industry has turned into a small-scale lab for society. Locally, art is already an indicator of gentrification. On a global scale, it is a feudal version of capitalism, with its focus on superstars and their dealer-collectors, and the extreme imbalance between rich and poor. Having said that, there is another positive and promising side to it, with its pluralistic and diverse approach, its old-school liberal and critical openness. We are in the middle of a shift, and art turns out to be the test drive.
Explore Art Cologne 2015 on Artsy.
Share
../../../components/articles_grid/view.coffee