The team behind the Art Genome Project, Artsy's in-house search technology and ongoing study of art, brings you trends we spotted at this year's iteration of 1:54.

The Art Genome Project
May 15, 2015 8:50am
This weekend, the young London-based art fair 1:54, which showcases contemporary African art and art related to the African diaspora, comes to New York for its first U.S. iteration. Acknowledging the diversity of artistic positions represented, the “54” in the fair’s name refers to the number of countries that constitute the continent of Africa, a landmass roughly the size of China, India, the United States, and much of Europe put together. With only 16 galleries on view, the boutique fair offers a rich but manageable presentation of works by artists from Africa, the Caribbean, and Europe, a geographic diversity that flouts rigid or purely topographic definitions of “Africa,” and recognizes the complex interplay between heritage, geography, and national, ethnic, and personal identity.
Given the difficulty of delimiting “Africa,” mapping contemporary African art at large would be near impossible. If there’s one thing that unites much of the work on view, it is that it defies easy categorization. Commenting on the tendency to expect distinctly regional subject matter from non-Western artists (who are viewed as what Gayatri Spivak has called the “Native Informant”), Lavar Munroe, whose work is presented by Nomad Gallery, has said: “I expect to see many flowers in work coming from the Caribbean, I expect to see African-American artists painting something about slavery, or painting something with a black figure in it. Those things are very expected, and that’s something that I’ve always been anti: anti-expected.” Below, The Art Genome Project discusses a number of themes explored—in often unexpected ways—by artists currently represented at 1:54. 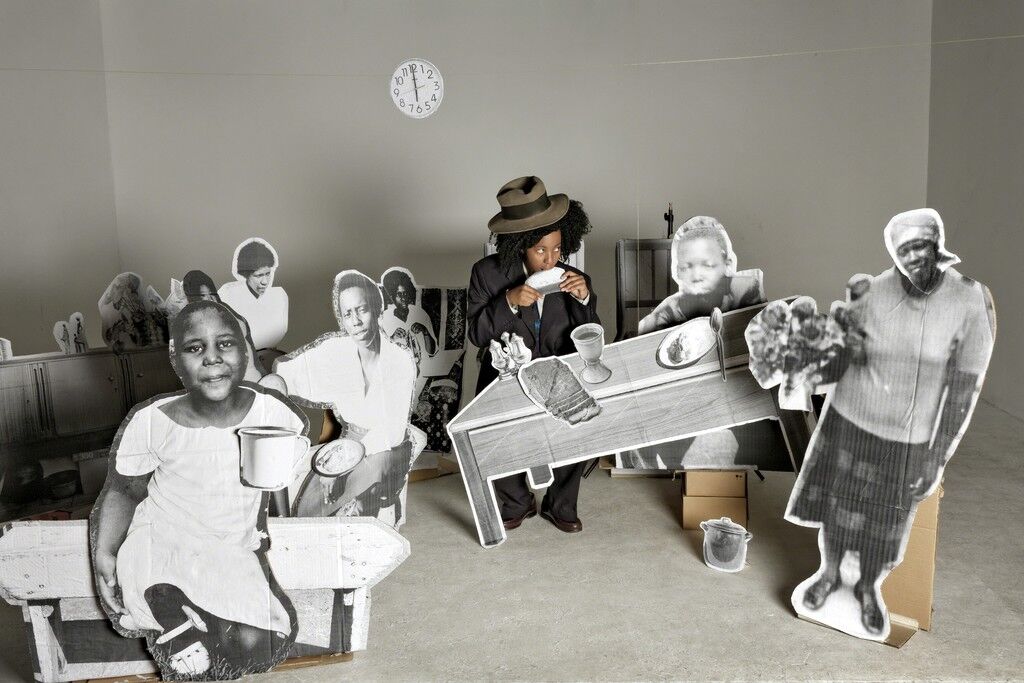 Lebohang KganyeThe Last Supper, 2013. Afronova
Lebohang Kganye, a young South African photographer and video artist, takes her family archives as her raw material, restaging family photographs and acting out memories passed down from her relatives. Playing the roles in a manner reminiscent of Cindy Sherman’s adopted guises for the camera, Kganye crosses the temporal and generational boundaries in her family. She aims to reanimate these memories and explore the tension in our own personal histories between factual reality and imagination.
In Pied Piper’s Voyage (2014), an animation composed of film stills including The Last Supper (2013), Kganye adopts her grandfather’s persona, wearing his customary suit and tie to reenact scenes from his life. She uses family photographs to create a collaged backdrop of life-size 2D cutouts, moving among these black-and-white memories with the fits and starts of stop-motion animation. Kganye examines familial and gender roles in this work. As a young woman, she was obligated to take on the role of provider and protector for her family after her mother’s death, a patriarchal role that, she notes, “most of the women in my family have had to take on because of the absent father figures.” Watch the full animation (which includes a compelling score) on her website. 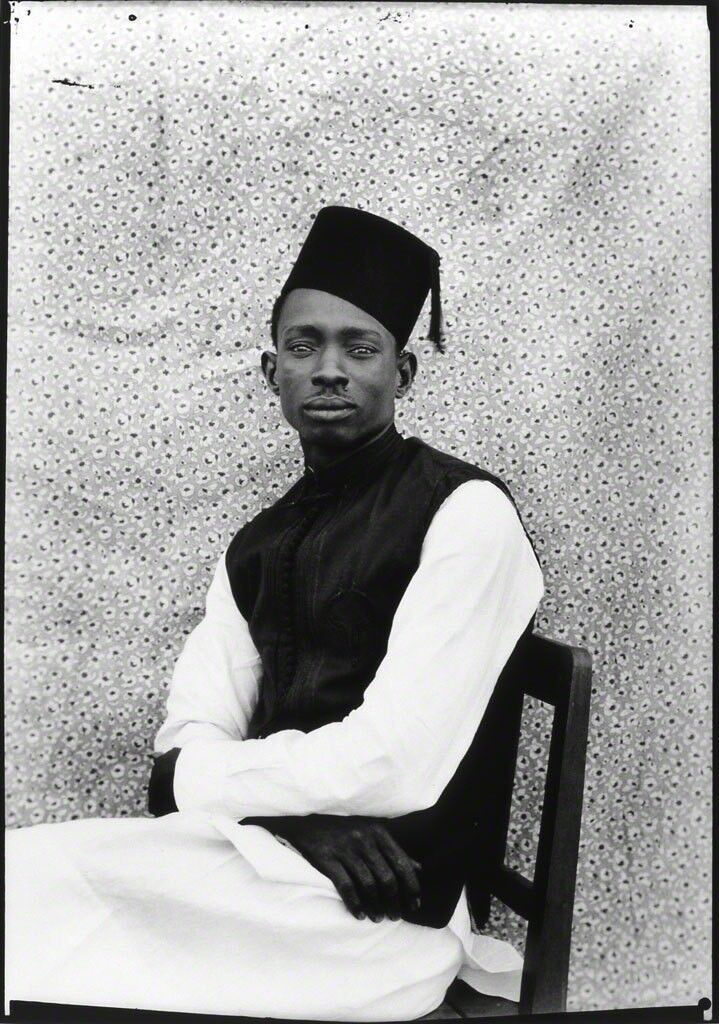 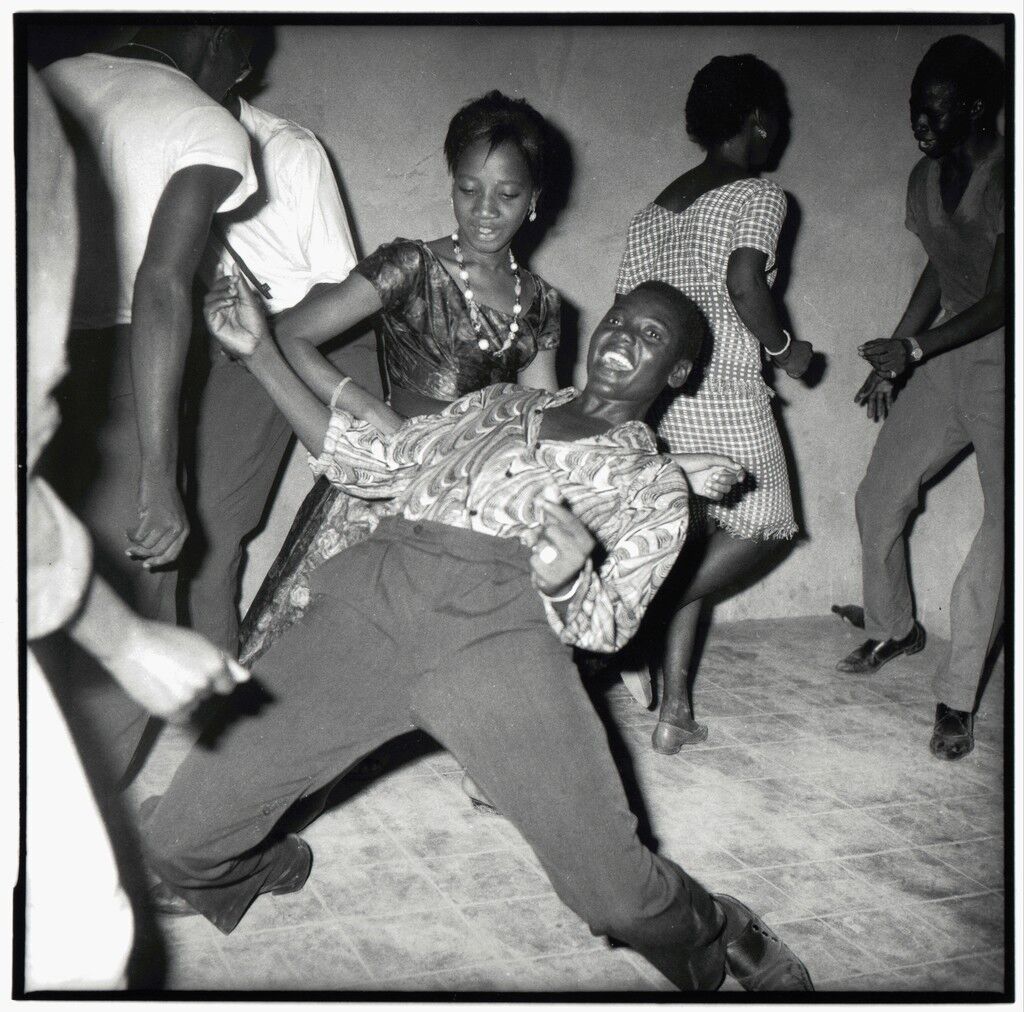 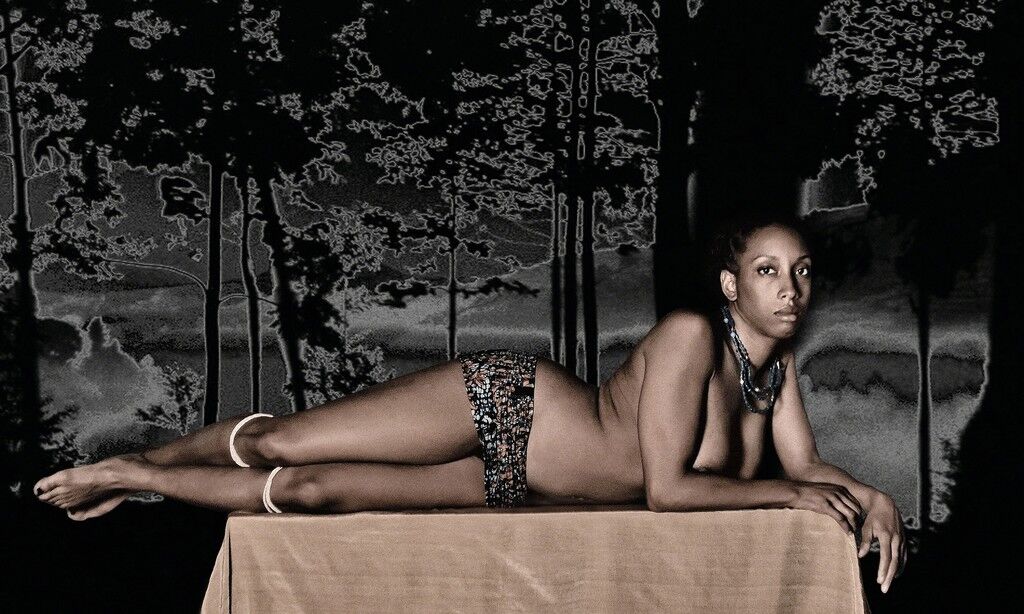 Ayana V. JacksonWhat will you tell them about me?/ Do you feel pain?, 2013. Mariane Ibrahim Gallery
Two acclaimed Malian studio photographers, Seydou Keïta and Malick Sidibé, both represented at 1:54 this year by Magnin-A,  are integral to the prominence of portrait photography in the history of 20th-century African art. The output from both photographers’ studios over the course of four decades captured the style, fashion, and personalities of a transitioning and modernizing Bamako society during the period before and after the country’s independence from France in 1960. Keïta is known for the specific styling and posing of his subjects, as well as the use of colorful costumes or even large-scale props like Vespas, which he kept available in his studio. His creative aim was to capture the individuality of his clients, but also elevate them into “just a little more than what [they] really are.”
Today, contemporary artists at the fair like Fabrice Monteiro and Ayana V Jackson at Mariane Ibrahim Gallery and Omar Victor Diop at Magnin-A are contributing to the continued practice in contemporary African art of staged photo-portraiture, though it is often motivated by a more political expression of identity or a critique of the history of photography and its role in racialized thinking, specifically during the rise of European colonialism.
Explore Portraiture and Portrait Photography. 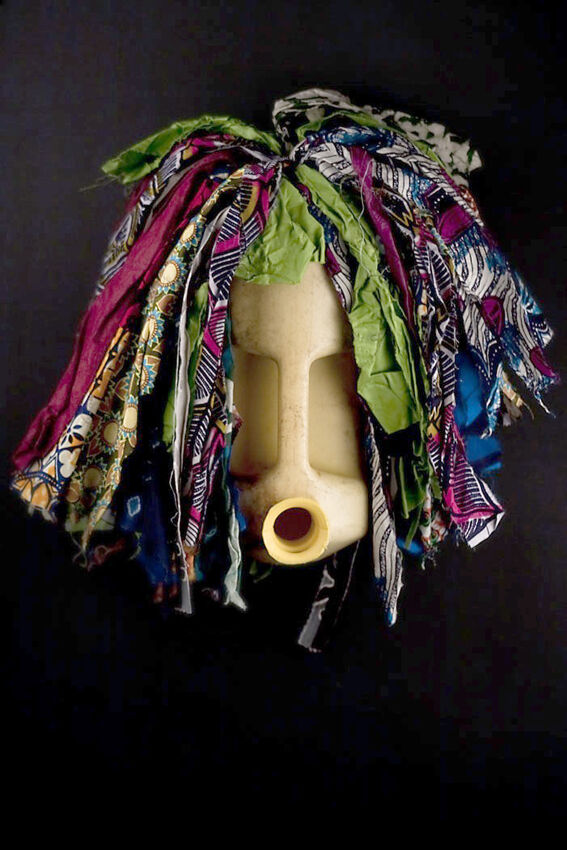 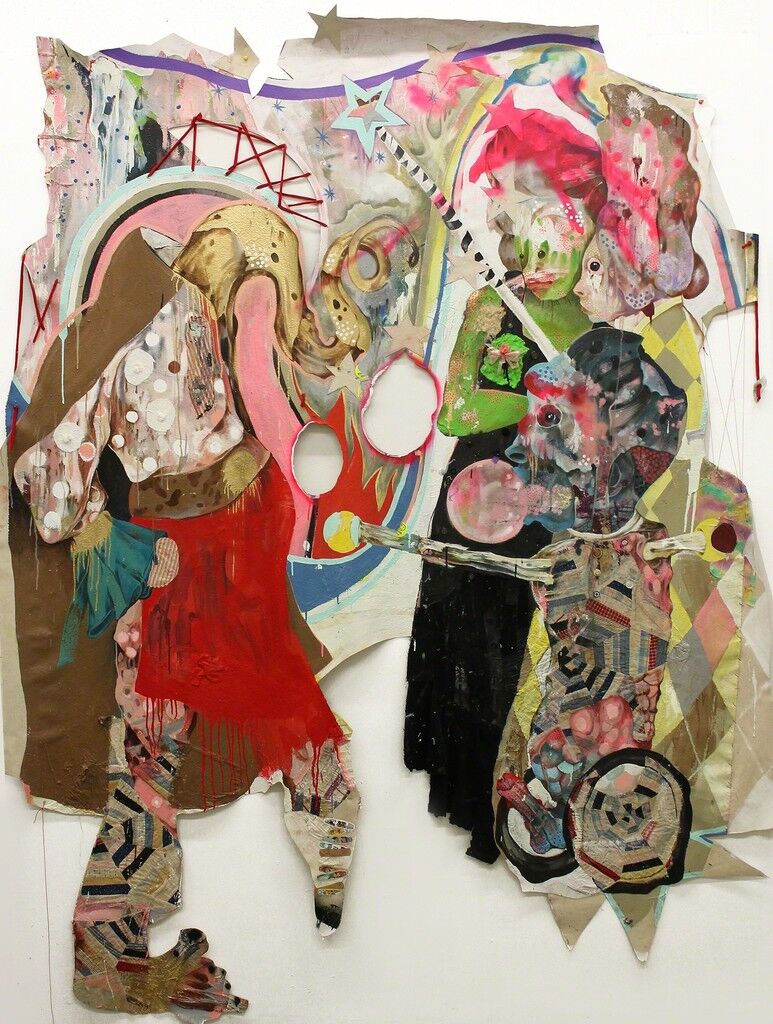 Lavar MunroeSomething Strange This Way Comes, 2014. Nomad Gallery
Beninese artist Romauld Hazoumé draws on his Yoruba heritage, in particular its tradition of masquerade, to create assemblages out of gasoline jerry cans that resemble traditional African masks. Here, he employs fabrics by NANAWAX, a Beninese fabric brand established in 2012 that sells African prints abroad. Bahamian artist Lavar Munroe creates paintings and assemblages that integrate textiles, household materials like string and buttons, stickers, and band-aids. History’s discards appear to converge in his monstrous figures—pastiched, created from torn and tattered canvas, or spray-painted to appear mottled and spotted. In fact, the particular subjects he investigates are the “exotic” peoples—Africans, Asians, Native Americans—displayed in so-called ethnographic exhibitions, or “human zoos,” in the 19th century as a form of entertainment. His figures’ spare-part aesthetics leaves them looking dismembered and diseased, drawing attention to the painful history of what Munroe refers to as “the spectacle of the non-white, diseased body.”
Explore Focus on Materials. 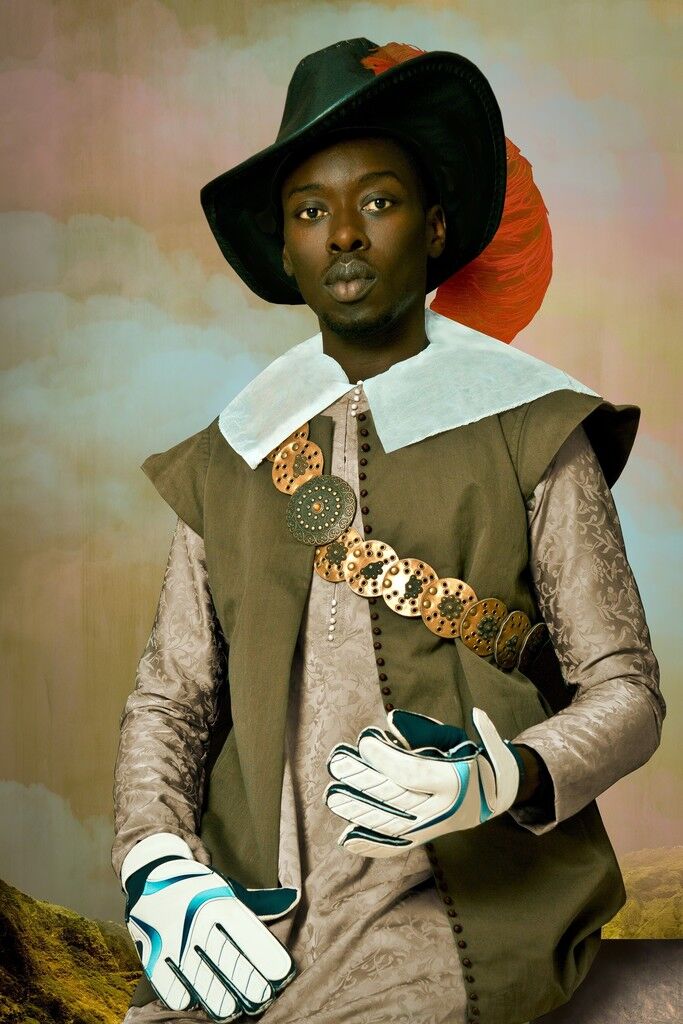 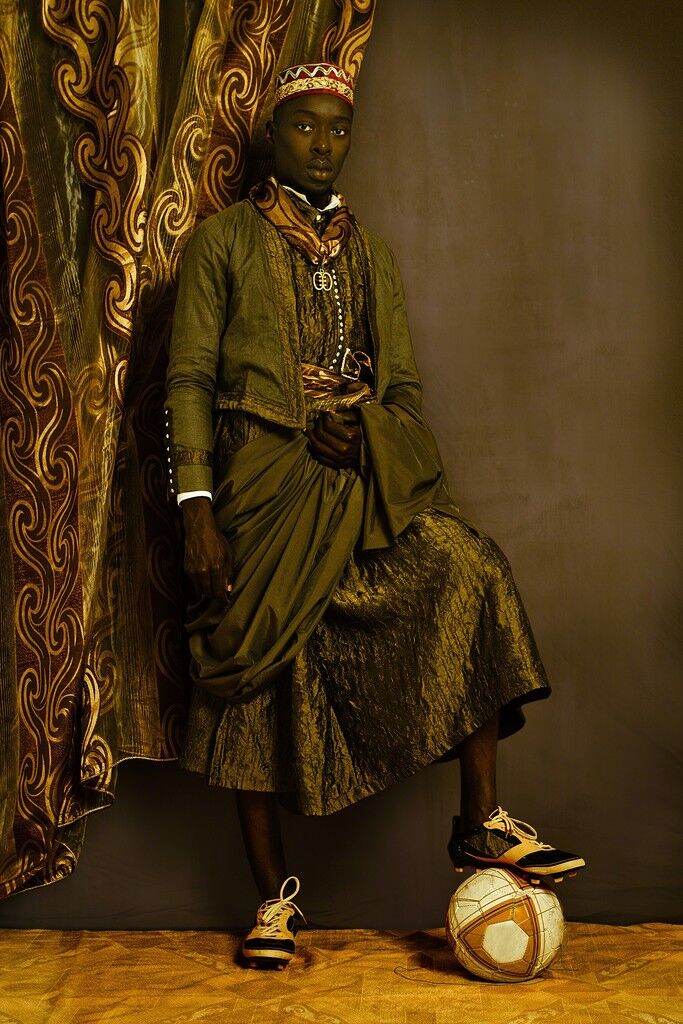 Omar Victor DiopDom Nicolau, Série Diaspora , 2014. Magnin-A
In “Project Diaspora” (2014), the Senegalese artist Omar Victor Diop recalls the historic figures of the African Diaspora by posing as them. In Don Miguel de Castro, Série Diaspora (2014), Diop poses as the iconic emissary of the Congo, who was sent to the Netherlands via Brazil as part of a delegation in 1643 to help resolve internal conflicts in the Congo. The portrait’s costume and composition appropriate that of Castro’s official portrait from this journey (painted by Jaspar Beck or Albert Eckhout in 1643), although Diop adds the gloves of a soccer goalie—referencing a different form of diplomatic gamesmanship, that of African soccer players residing in Europe. 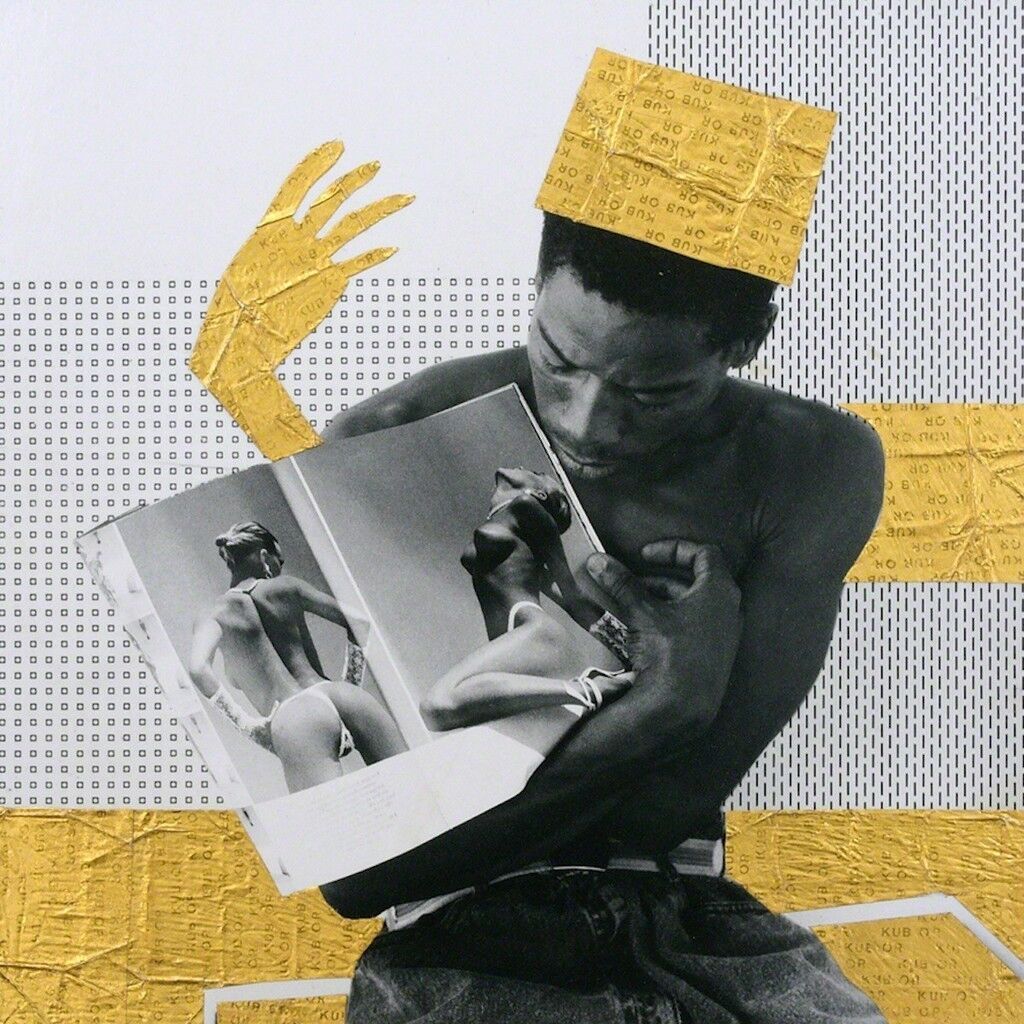 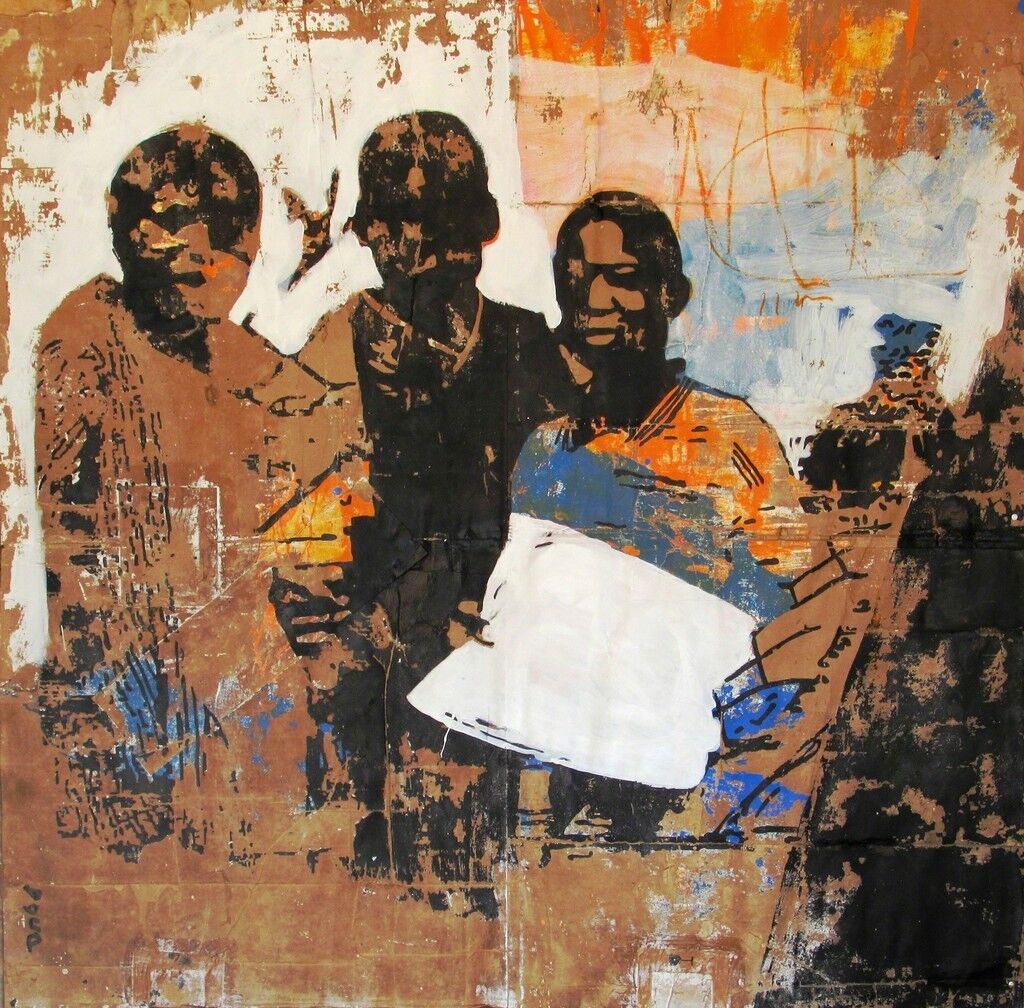 Armand BouaLe journal blanc, 2015. Jack Bell Gallery
Figurative painting is alive and well in the contemporary African art scene. French expat Vincent Michéa—who emigrated to Senegal in 1986 and calls Dakar his hometown—paints colorful scenes inspired by the popular culture of Dakar, a bustling city and important administrative hub in West Africa. Michéa has created his own version of Pop Art, using Ben-Day dots like Lichtenstein to make his figures stand out from their surroundings; large areas of flat, unmodulated color reminiscent of Ed Ruscha and early David Hockney; and images of (Senegalese) celebrities much like Andy Warhol. This African flavor of Pop Art also features the vibrant colors and hard edges of traditional West African textiles.
The works of Richard Mudariki—a Zimbabwean painter and resident of Cape Town, South Africa—are part grotesque, part humourous. His style evokes the German New Objectivity (Neue Sachlichkeit) style of the 1920s, and much like the original artists who worked in that style, Mudariki’s art is full of social commentary about various issues in Africa today, including the lack of human rights protections, corporate corruption, and gender inequality. The Ivorian painter Armand Boua predominantly depicts the gritty street life of Abidjan that people prefer not to think about. Using a technique that involves applying acrylic and tar to found cardboard boxes, then scrubbing it off layer by layer, Boua evokes the suffering and painful reality of his subjects who call the streets their home.
Explore the 1:54 Contemporary African Art Fair New York 2015 on Artsy.
Banner image of Richard Mudariki’s THE NEW CHURCH, 2014, courtesy of Artco Gallery.
Share
../../../components/articles_grid/view.coffee