Alison W. Chang
Feb 11, 2016 10:45am
On July 23, 1877, crowds gathered in a Parisian courtroom to witness the trial of the Widow Gras, who was accused of manipulating a workman into throwing acid into the face of her lover. This crime, and others like it, inspired the Swiss-born artist
Eugène Grasset
’s La vitrioleuse (The Acid Thrower) (1894). With her hand poised, the woman in the print turns to look at the viewer, her greenish pallor and frenzied eyes perhaps indicative of her emotional state. 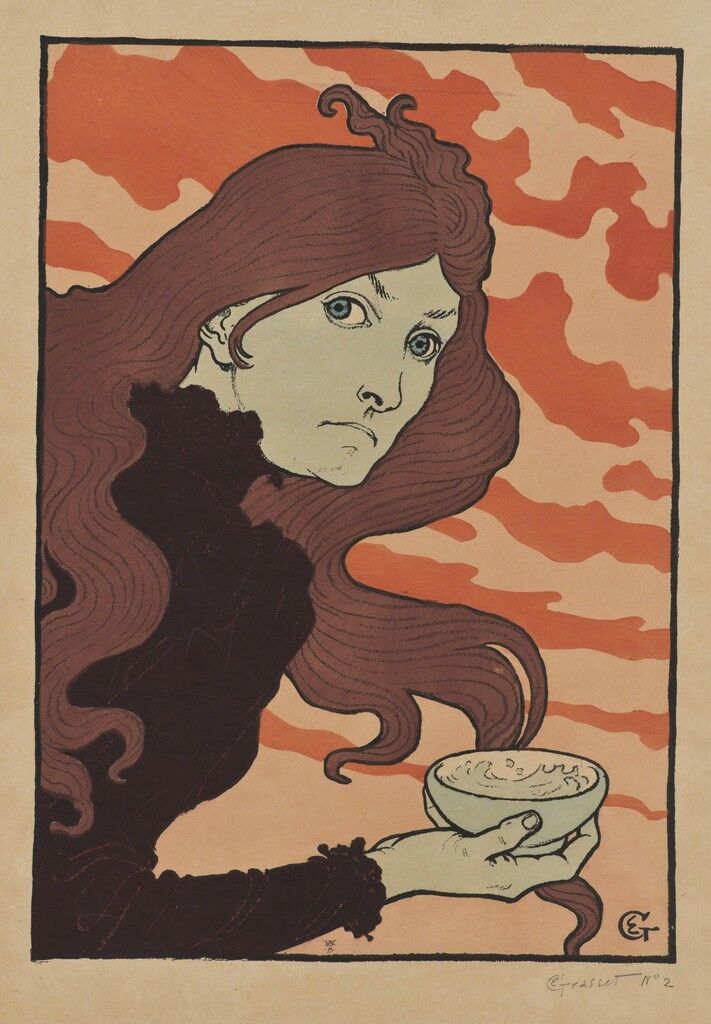 Eugène Samuel Grasset
La vitrioleuse [The Acid Thrower], 1894
Hammer Museum
Appearing frequently in the visual arts and literature of the late 19th century, the era of
Post-Impressionism
and
Symbolism
, femmes fatales such as the Widow Gras wore a variety of guises, ranging from everyday women to vampires and harpies. The femme fatale was presented as callous, deceitful, and violent, often using her powers of seduction as a means to destroy her enemies.
This archetype rose to prominence partly in response to the shifting status of women in society. Throughout the 19th century in France and Northern Europe, activists achieved inroads towards women’s civil and political rights, and challenged long-held assumptions about a woman’s role in the workplace, the home, and in romantic relationships. While wives were expected to be obedient and subservient to their husbands, many artists and writers of the late 19th century (fin-de-siècle) depicted women as powerfully and dangerously alluring, reflecting society’s fear of increasingly autonomous women. Though many of these works can be interpreted as misogynistic, they are the product of their time, manifesting a response to the challenges to established definitions of masculinity and femininity during the 19th century.

The Femme Fatale as Monster 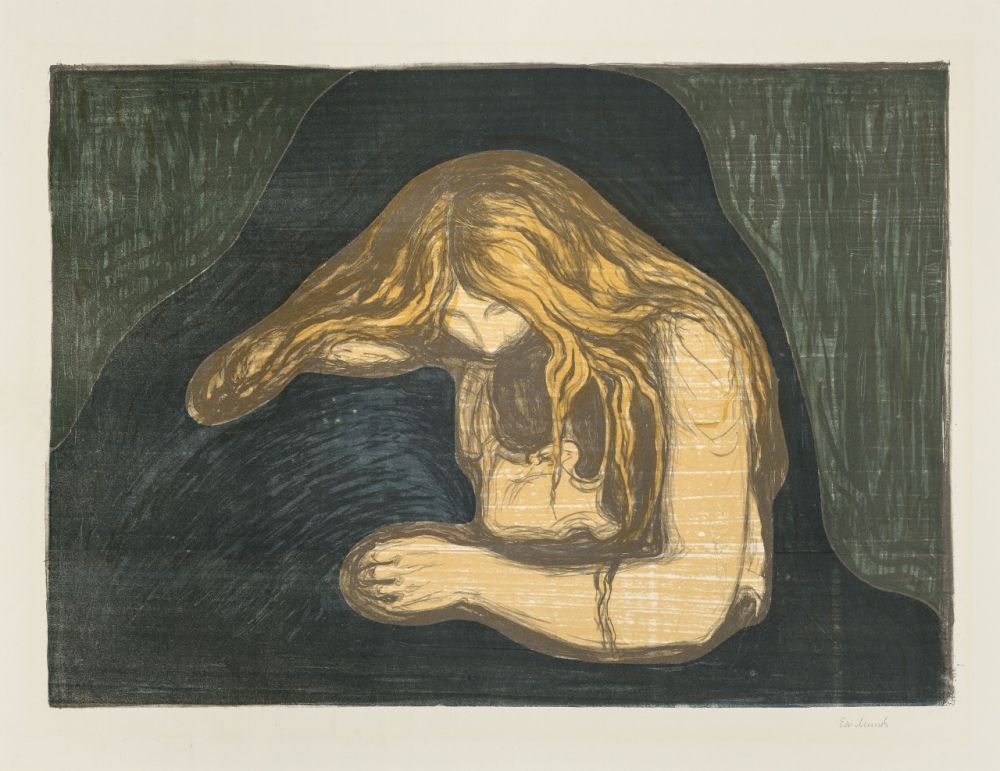 Edvard Munch
Vampire II, 1895/1902
Galerie Thomas
Advertisement
The painting Vampire (1893), by the Norwegian artist
Edvard Munch
, was originally exhibited as Love and Pain until an author and admirer of Munch’s work renamed the work Vampire in June 1894, creating a new narrative around the image that stuck. The title transforms the image from one of a pair of lovers in the throes of an intense embrace into a female oppressor exacting brutal revenge. Vampires were not the only mythical creatures depicted as femmes fatales in this period. The sphinx, with the head of a woman, the body of a lion, and the wings of a bird, appears as a femme fatale in
Gustave Moreau
’s Oedipus and the Sphinx (1864). A figure of inscrutability and animalistic violence, the sphinx digs her claws into Oedipus’s chest, her hind legs dangerously close to his genitalia, enhancing the image’s sexual tension. Portraying the femme fatale as a monstrous creature gave visible form to those traits that artists considered grotesque in a woman: a predilection for lascivious behavior, deception, and manipulation. 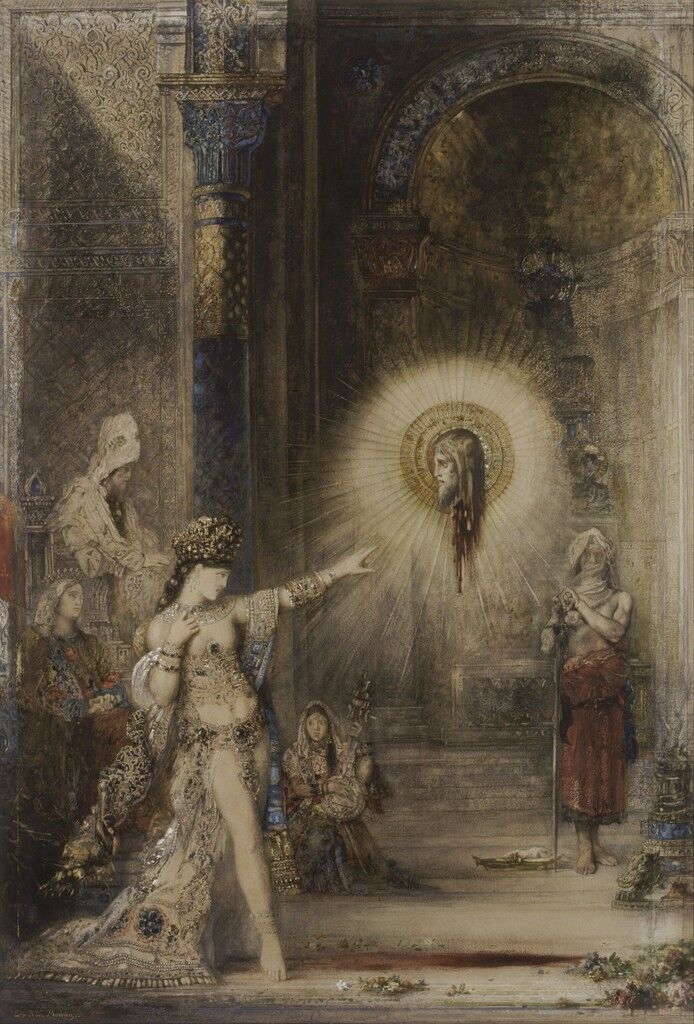 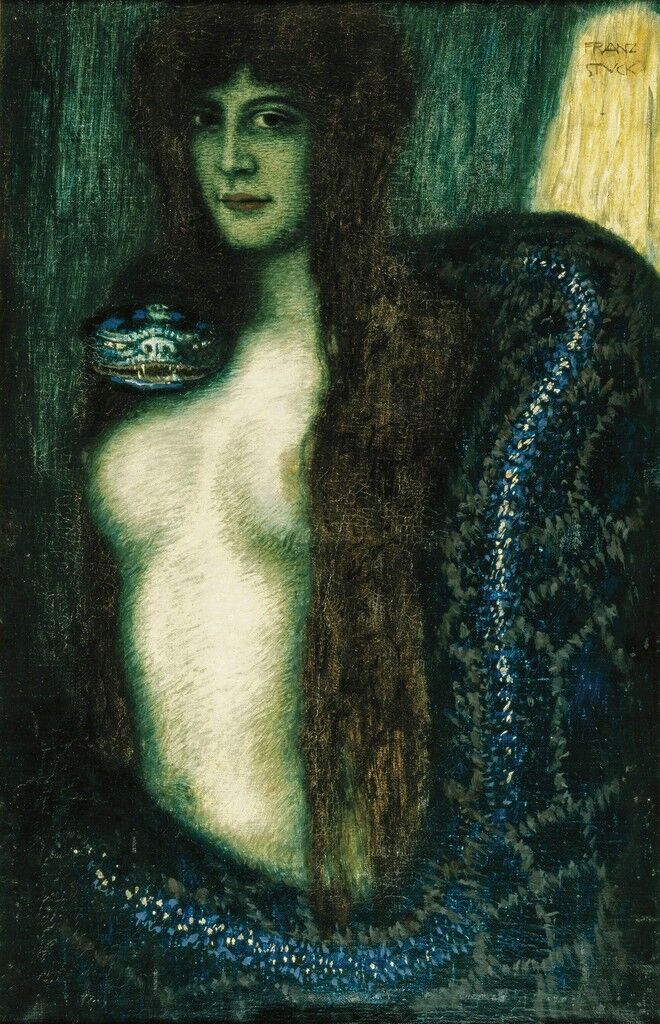 Franz von Stuck
Die Sünde (Sin), ca. 1908
Frye Art Museum
Artists such as Moreau,
Paul Gauguin
,
Gustav Klimt
,
Franz von Stuck
, and
Jan Toorop
looked to well-known historical, Biblical, and mythological femmes fatales to reinforce the dangers of succumbing to a woman’s sexual allure. In von Stuck’s painting Die Sünde (Sin) (ca. 1908), which refers to Eve in the Garden of Eden, a naked woman aggressively returns the viewer’s gaze, a snake coiled around her torso and neck so that it frames her breasts and reinforces her seductiveness. Salome, the notorious femme fatale of the New Testament, was also a popular subject among artists of the late 19th century. In the story, her sexualized dance convinces Herod to grant her a reward, and she demands John the Baptist’s head on a platter. Moreau’s watercolor The Apparition (1874-76) shows a scantily clad Salome engaged in a vision of her eventual conquest, the severed head of John the Baptist. The revival of these dangerous women in both literature and the visual arts served as a cautionary tale for men and women of the period.

Not every female lover in fin-de-siècle art was a villain of mythic proportions. Artists also depicted the heartache and complexities of everyday romantic relationships. The French artist
Félix Vallotton
is perhaps best-known for his 1897-98 woodcut series “Intimités (Intimacies),” which offers a glimpse into the private lives of Parisian couples at moments of great emotional vulnerability. In one print from the series, Le Mensonge (The Lie), a couple embraces while the woman whispers in the man’s ear. Their intimacy is at odds with the title of the work, implying their romantic harmony is merely a façade. Munch also addresses the pain of love in his 1896 painting Separation. As a young woman looks out onto the infinite expanse of the ocean, her lover turns away from her. Her hair winds around his heart, a physical manifestation of their emotional connection. As she severs their relationship, he doubles over in pain, his blood-stained hand clutching his chest. These artists show love as traumatic, violent, and tumultuous, revealing the complex nature of gender relationships at the turn of the century.
Alison W. Chang
Explore more on the topic of Love in Art
Related Stories

How Collectors Can Avoid Buying Forged Works by Basquiat, Haring, and Warhol