How Innovations in Paint Fueled the Washington Color School Movement 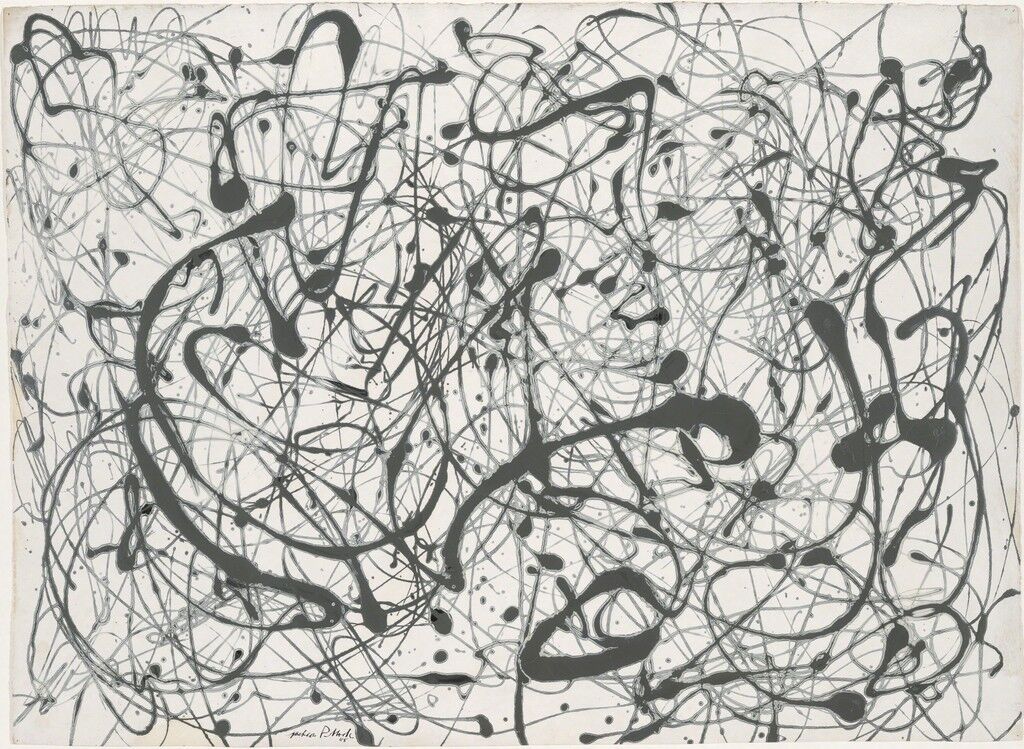 Jackson Pollock
Number 14: Gray, 1948
Yale University Art Gallery
At the height of his career in 1951, Abstract Expressionist
Jackson Pollock
exhibited his new black-and-white paintings at the Betty Parsons Gallery. In these works, Pollock applied the distinctive drip-painting technique he had developed in the late ’40s to raw, unprimed canvas, but with a difference. For the very first time, he used only a single color, in effect catalyzing a new movement in art.
Many came to see that exhibition, but few artists were as inspired by what they saw as the young
Helen Frankenthaler
. Describing her experience, she said, “It was as if I suddenly went to a foreign country but didn’t know the language, but had read enough and had a passionate interest, and was eager to live there. I wanted to live in this land; I had to live there and master the language.” The very next year, the legendary art critic Clement Greenberg took Frankenthaler to visit Pollock’s studio in East Hampton to help her “learn the language,” and by the end of that year she had painted her breakthrough work Mountains and Sea (1952), a monumental painting full of expressive pours of thinned, colorful paint. 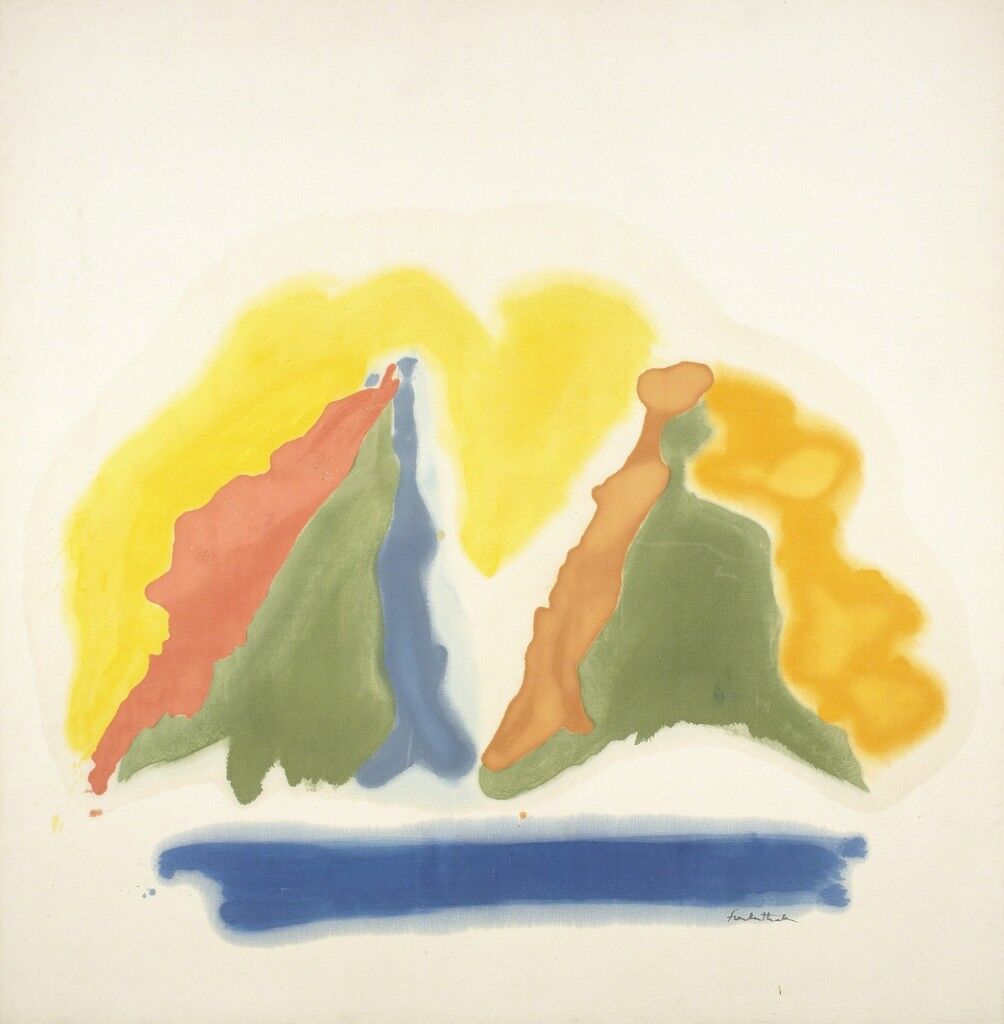 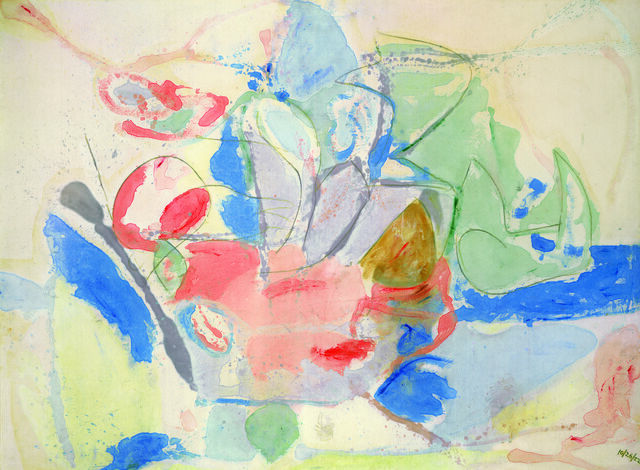 Helen Frankenthaler
Mountains and Sea, 1952
Helen Frankenthaler Foundation, Inc. On extended loan to the National Gallery of Art, Washington, D.C.
A few months later, in the spring of 1953, Greenberg invited
Morris Louis
and
Kenneth Noland
, a couple of promising young artists working in Washington, D.C., for a visit to New York. During their trip, Greenberg took the two artists to see Frankenthaler’s studio. Upon seeing Mountains and Sea, Louis declared that Frankenthaler was “a bridge between Pollock and what was possible.” What the Washington artists were so taken with was Frankenthaler’s technique, that of applying oil paint that had been thinned down to the consistency of watercolor to unprimed canvas. Effectively staining the canvas with paint, the technique subverted the figure-ground relationship associated with painting by blurring the boundary between form and surface altogether. Frankenthaler took Pollock’s gestural drips of black paint and transformed them into large, tranquil fields of brilliant color, hence the term “
Color Field Painting
.” 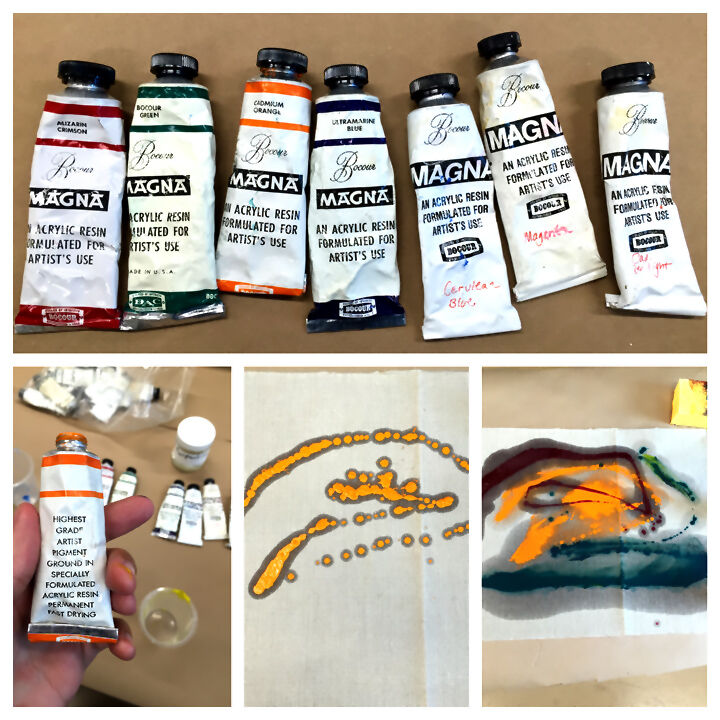 The stain-painting technique used by Helen Frankenthaler, and later by Washington Color School artists (counterclockwise from top): Magna paints (such as the vintage examples used here) were thinned out with turpentine and then poured across raw, unprimed canvas. Then, a sponge and felt-brush were used after each pour to push the wet paint across the surface. The haloing effect seen around each stain results from the turpentine that is used to thin out the paint, a step necessary for oil paints and the Magna brand of acrylic paint. This step would later become unnecessary with the introduction of new types of acrylic paint that eventually replaced Magna.

Advertisement
Determined to explore Frankenthaler’s innovations, Louis and Noland returned to Washington and, along with other members of their circle, began experimenting with this stain-painting technique. But there was one problem: the medium. Oil paint, when thinned down, loses some of its color saturation, resulting in paintings that appear to be slightly washed out. Rather serendipitously, a new paint medium that offered superior color properties to oil had just recently been developed.
Magna—released in 1947 by the artist Leonard Bocour and his nephew, the notable paint chemist Sam Golden—was the first-ever brand of acrylic paints formulated specifically for artists. Forgoing linseed oil for the same synthetic polymer used in Plexiglas, Bocour and Golden created a new class of paint that had many benefits over oil paint: acrylic paint dries faster than oil, it does not yellow because the acrylic resin is as clear as glass when dry, and most importantly, it can be applied thickly with the same consistency as oil paint or thinly with the same consistency as watercolor, all while retaining full color saturation. 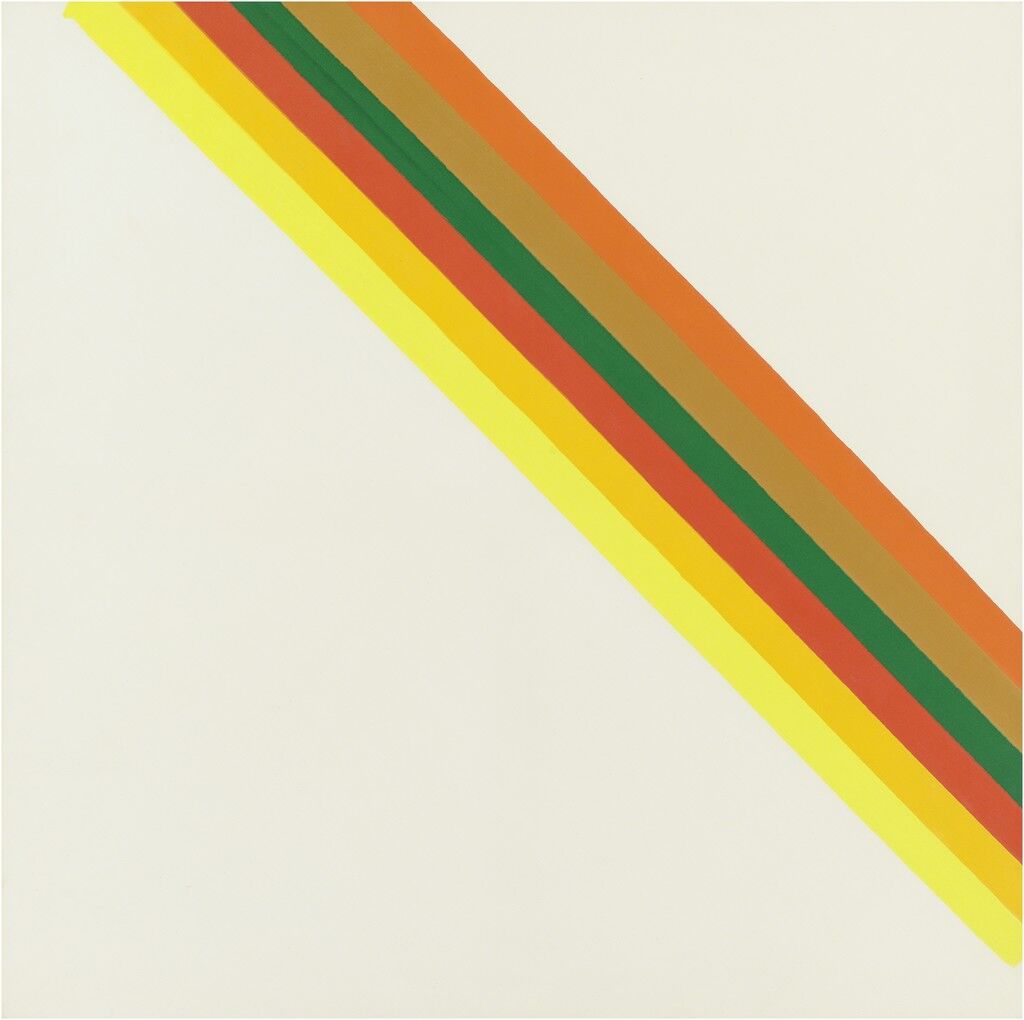 Morris Louis
Hot Half, 1962
Ameringer | McEnery | Yohe
Louis and Noland were among the earliest adopters of this new paint, enabling them to create stain-paintings that were all the more saturated than those of Frankenthaler (until 1962, when she switched over to acrylic paints). In 1965, Louis and Noland, as well as
Gene Davis
,
Howard Mehring
,
Thomas Downing
, and
Paul Reed
, were featured in an exhibition at the now defunct Washington Gallery of Modern Art, called the “Washington Color Painters,” and since then, this group of artists, along with a few others, has been known as the
Washington Color School
.
As for the afterlife of Magna, the brand was ultimately short-lived, as it was replaced by a type of acrylic paint that could be used with water rather than with the organic solvents that Magna required. It is these water-based acrylics that now dominate the fine art paint market today.
—Riad Kherdeen, Genome Team Research Intern
Explore more Washington Color School artists on Artsy
.
Related Stories