The Evolution of Picasso’s Prints, from the Saltimbanques to the 347 Series

Artsy Editors
Jun 20, 2016 11:52am
Known for his diverse styles and prolific output,
Pablo Picasso
is the most famous and celebrated Modernist of the 20th century. While his paintings have achieved record high prices at auction and his sculptures have inspired blockbuster exhibitions, Picasso also excelled in printmaking, producing over 2,400 etchings, lithographs, and linocuts over the course of his career—many of which are considerably more affordable, though works containing the artist’s signature often cost twice as much as those without. There may be as many as 180,000 Picasso prints in circulation, but each individual one can be quite rare, especially as many continue to leave the market to enter museum collections.
Collaborating with master printmakers across France, Picasso invented new techniques that pushed the medium forward, while linking him to the great printers of the past like
Francisco de Goya
and
Rembrandt van Rijn
. From the “Saltimbanques Suite” of 1904-5 to the “‘156’ Series” of 1970-2, these prints trace the development of Picasso’s iconic styles, romantic relationships, and creative partnerships. 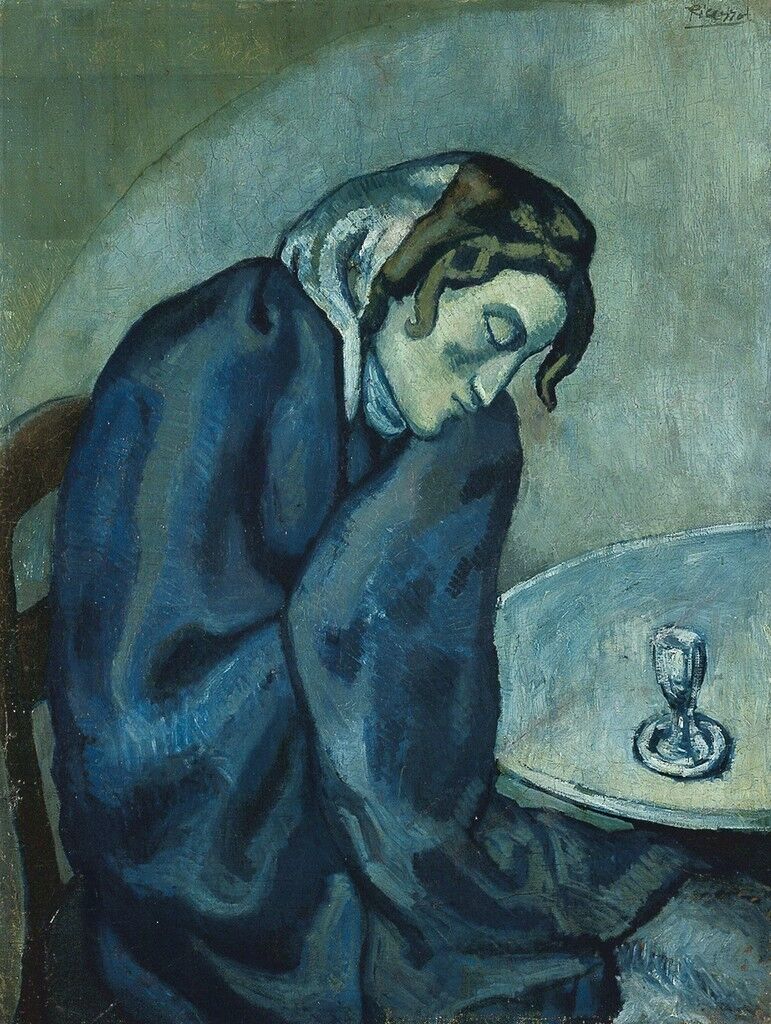 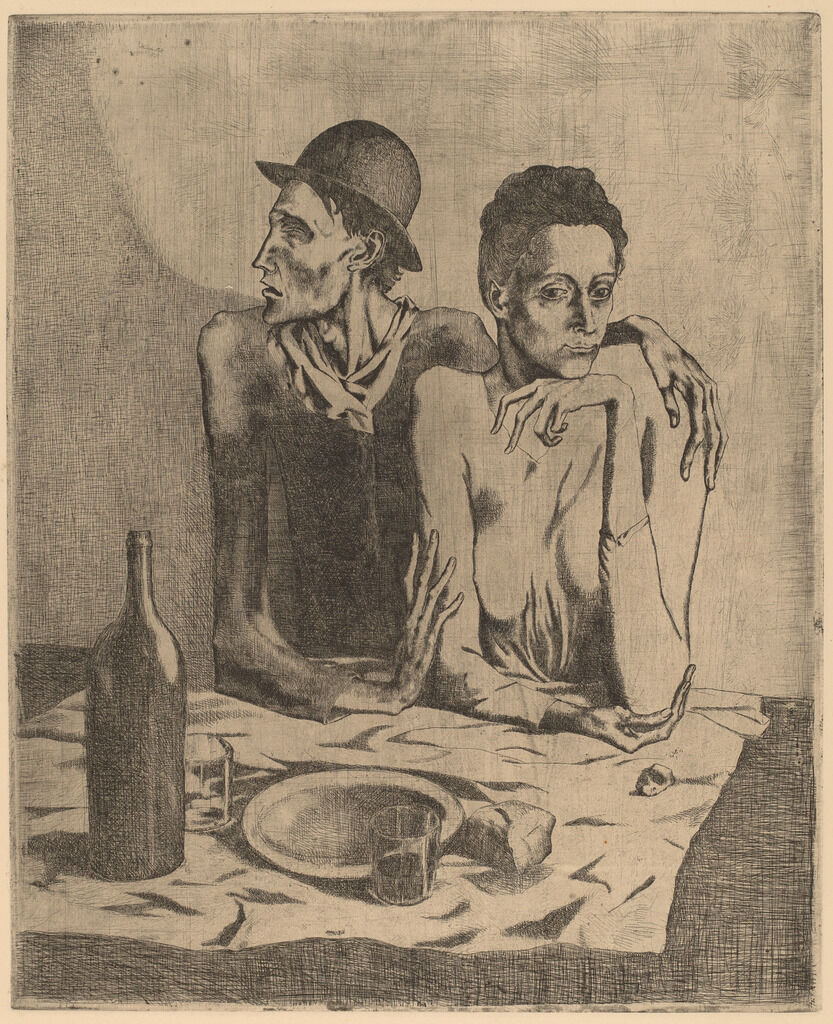 Pablo Picasso
The Frugal Repast (Le repas frugal), 1904
National Gallery of Art, Washington D.C.
At 23 years old, Picasso created his first series of prints: a group of 15 etchings and drypoints now known as the “Saltimbanques Suite,” named for the Parisian circus performers that are characteristic of the artist’s “rose period.” The first in the series—and the second print ever produced by Picasso—is Le Repas Frugal (1904), one of his priciest etchings, which recently sold at auction for seven figures. Emblematic of Picasso’s “blue period,” the work depicts an impoverished couple at the dinner table, embracing one another yet gazing in opposite directions.
Picasso produced these prints in collaboration with the Parisian printer Delâtre at a time when the artist was still quite poor. He hoped to generate income by selling editions. Unsuccessful in this endeavor, Picasso gave many of the works to his friends and supporters as gifts, signing some of them with special dedications. Despite this financial upset, Picasso embraced printmaking as part of his artistic practice, buying a small printing press for himself in 1907.
Four years later, after Picasso had gained some renown through the advent of
Cubism
, the art dealer Ambroise Vollard purchased the 15 plates of the “Saltimbanques Suite,” publishing an edition of over 250 prints for each, many unsigned. In the following decades, Vollard commissioned Picasso to produce three more print series: The first accompanied a short story by Honoré de Balzac, the second illustrated a version of Ovid’s Metamorphoses, and the third would become Picasso’s most famous and sought-after print series: the “Vollard Suite.” 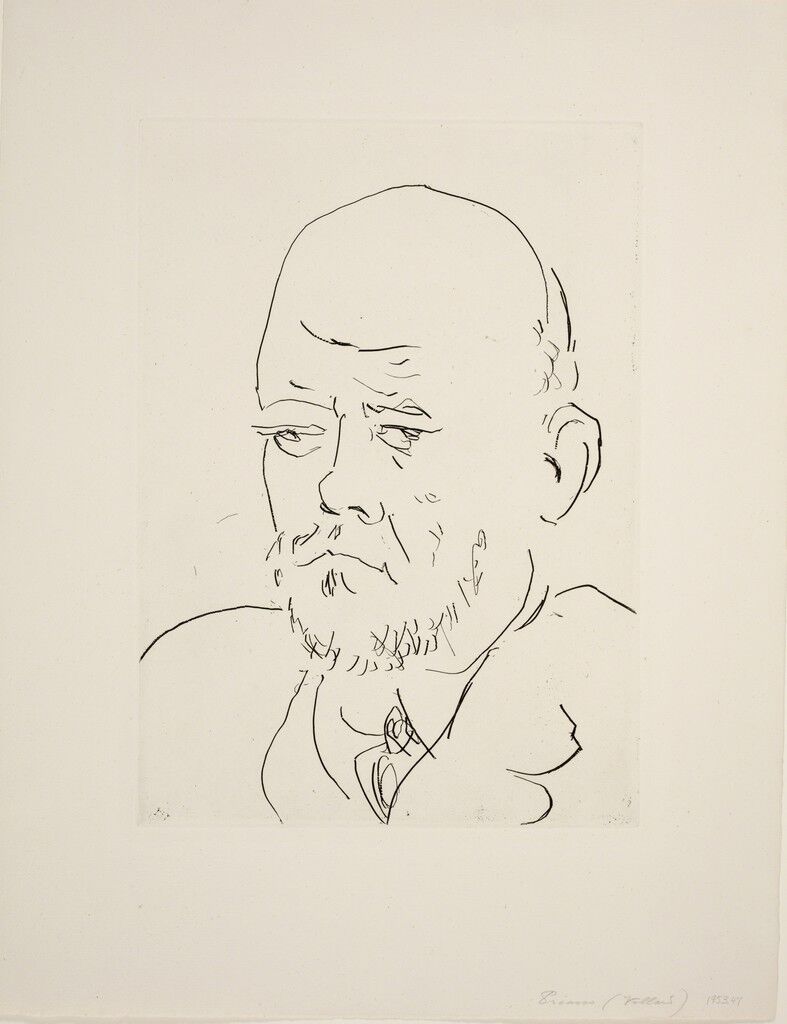 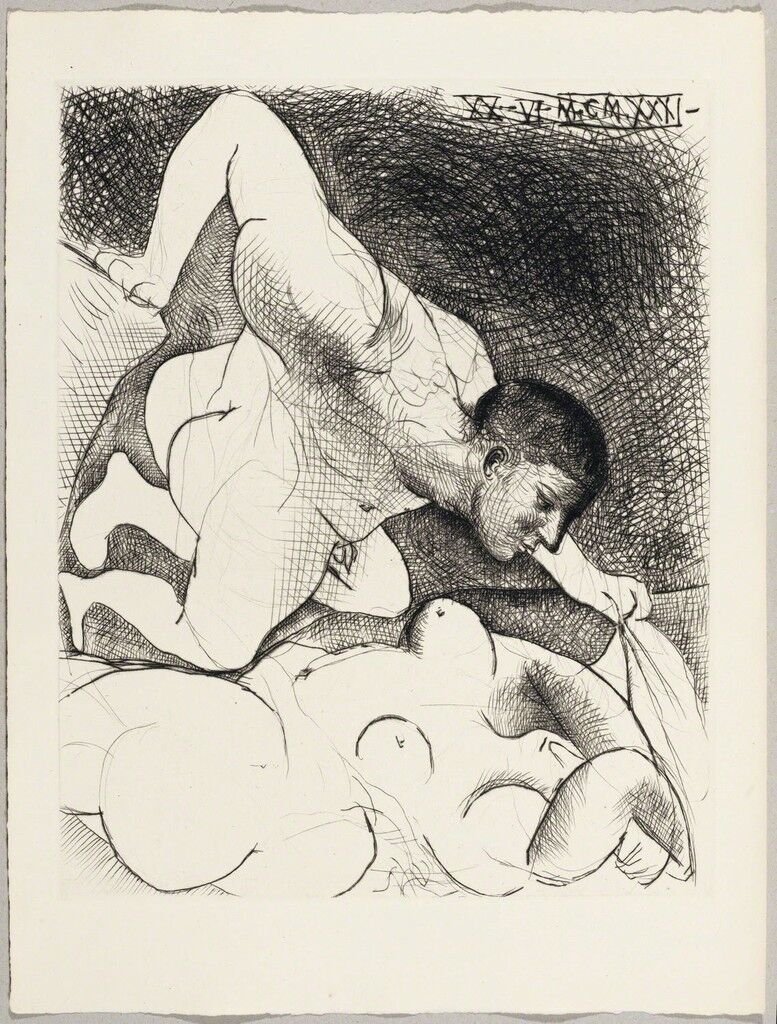 Pablo Picasso
Homme dévoilant une femme, 1931
Koller Auctions: Prints, Multiples & Photography
Advertisement
As art legend has it, the “Vollard Suite” began with a trade. In exchange for paintings by the
Impressionist
masters
Paul Cézanne
and
Pierre-Auguste Renoir
, Picasso agreed to produce a series of 100 prints for his art dealer, Ambroise Vollard. Created from 1930 to 1937, the etchings in the suite are the first dated prints by Picasso. Five themes dominate this group of works: The Battle of Love, The Sculptor’s Studio, Rembrandt, The Minotaur, and Portraits of Vollard.
While many of these motifs span Picasso’s oeuvre, others speak directly to this era. In the years following his purchase of the Chateau Boisgeloup in the early 1930s, Picasso dedicated himself to producing sculpture. Some 46 prints—nearly half of the series—were created during this time and depict the sculptor in the studio, exploring the at-times romantic relationship between the artist, the muse, and the sculpture. The
classical style
of the “Vollard Suite,” reminiscent of the economic line drawings of the
ancient Greeks
, was likely inspired by Picasso’s muse and model during this period, Marie-Thérèse Walter, who was often described as having classical features.
Parisian printer Roger Lacourière produced the “Vollard Suite” for Picasso in 1939 with an edition size of 325 (though others have suggested the total to be 313 or 340). Vollard died that same year in a car accident before he had a chance to sell the prints himself. The outbreak of World War II further delayed the distribution of the suite, which were not put on the market until the 1950s by the dealer Henri Petiet. Recognizing their commercial value, Picasso back-signed many of the prints as a way of raising money for left-wing political causes. 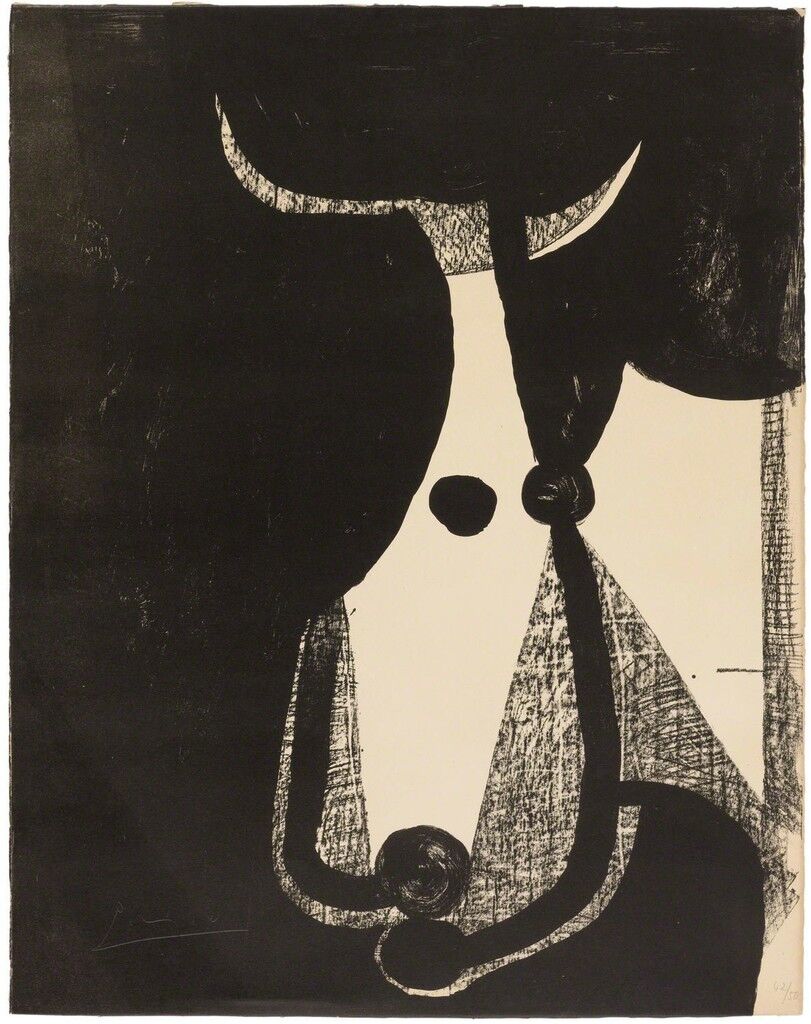 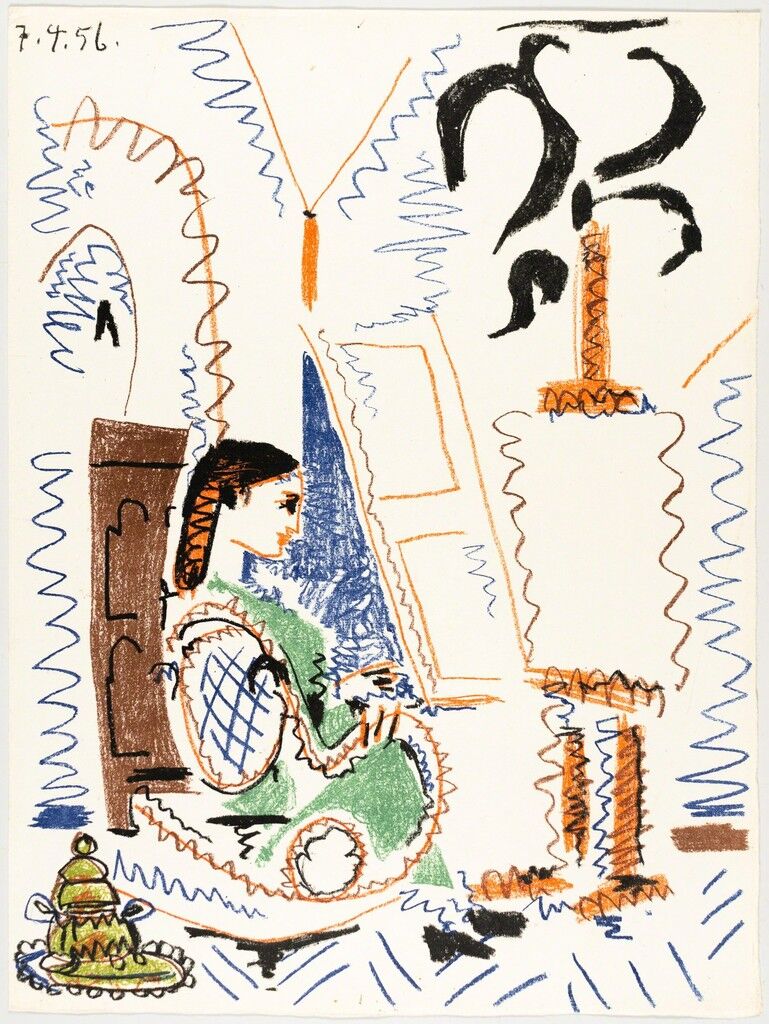 Pablo Picasso
L’ATELIER DE CANNES, 1956
Christopher-Clark Fine Art
Up until 1945, almost all of Picasso’s prints were black and white, and only a handful of them were
lithographs
. This ratio drastically changed after World War II, during the artist’s collaboration with master printmaker Fernand Mourlot. A favorite medium for Francisco de Goya, lithography appealed to Picasso’s desire to align himself with the greats of
Spanish artmaking
. In just under two decades, Picasso and Mourlot produced over 350 lithographs (many of them in color), pushing the boundaries of the medium through new techniques such as finger-painting.
Lithography enabled Picasso to work quickly and experimentally, all while tracing his artistic process by printing works in their various states. Picasso’s lover Françoise Gilot, who was also the most frequent subject of his lithographs, explained the appeal of the technique in her 1964 book Life with Picasso, writing that the artist once said: “I’ve reached the moment...when the movement of my thoughts interests me more than the thought itself.”
In 1959—six years after Gilot left him—Picasso moved from Paris to the South of France and married Jacqueline Roque, who was more than forty years his junior. Far from Mourlot’s studio, the process of lithography became too laborious for the artist, who then turned his attention to a new printmaking technique: linocuts. 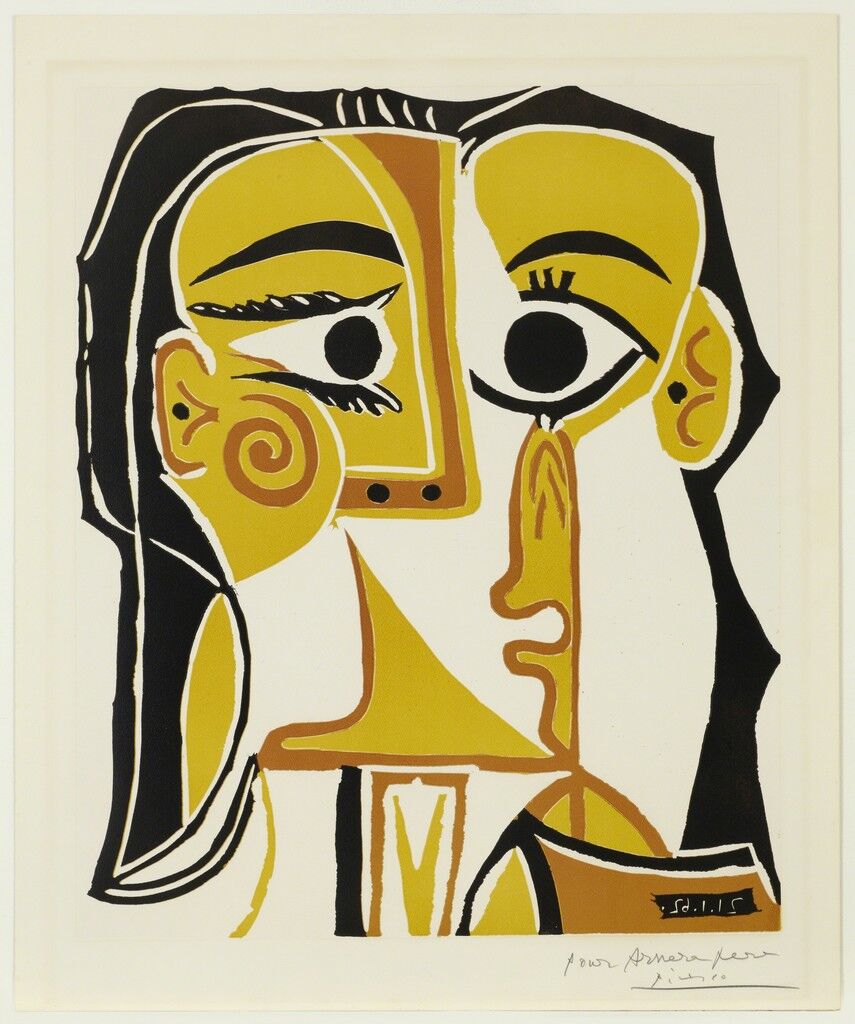 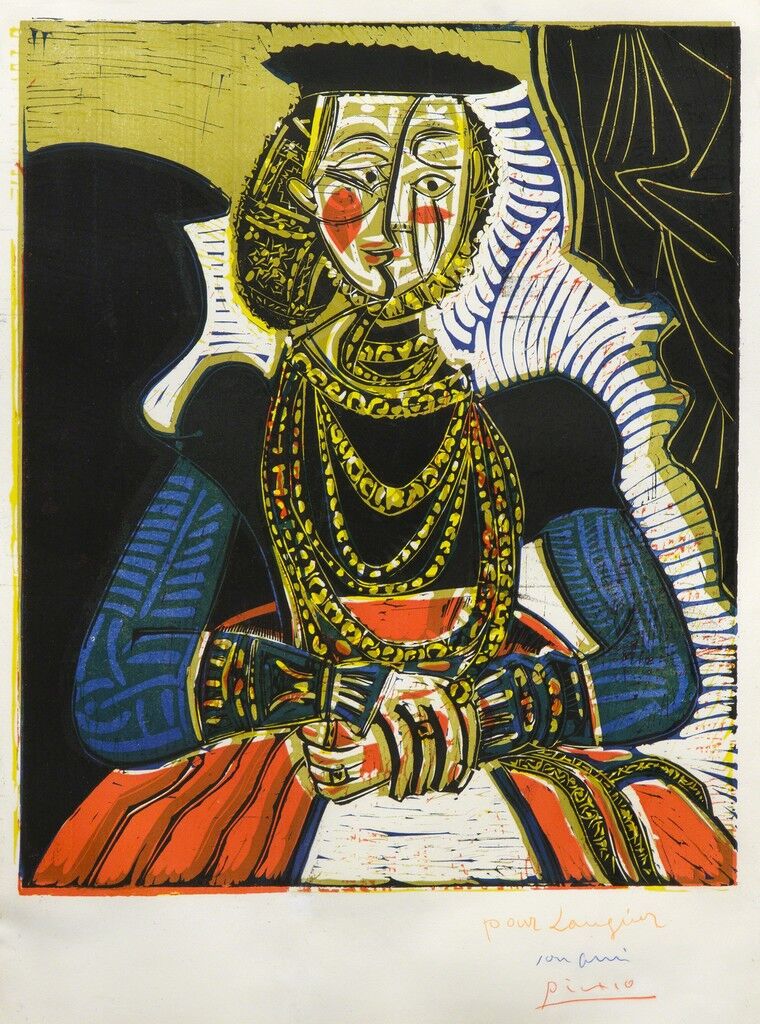 Pablo Picasso
Portrait of a Young Girl, after Cranach the Younger, II (Buste de Femme d'après Cranach le Jeune), 1958
Heather James Fine Art
At age 77, having already produced over 2,000 unique prints, Picasso began creating linoleum prints, also known as linocuts. Invented in the 1860s, linoleum first entered artists’ studios in the 1930s as a softer and lower-cost alternative to
woodcutting
. Drawn to the speed of the medium, Picasso created over 100 linocuts in the following years, working with linocut expert and local printer Hidalgo Arnera.
Picasso’s first color linocut, The Bust of a Woman, after Cranach the Younger (1958), revealed the limitations of color linocut printmaking. To incorporate five colors into the composition, Picasso needed to create five separate linoleum blocks, one for each color, resulting in a final image that contained misaligned patterns. Together with Arnera, Picasso invented a new method for creating multi-color prints from only one block of linoleum. While the new technique provided greater control over the final product, it did not allow for any backtracking during the printmaking process. Except for Cranach, Picasso’s color linocuts all use this method, and speak to the artist’s technical mastery of the medium. 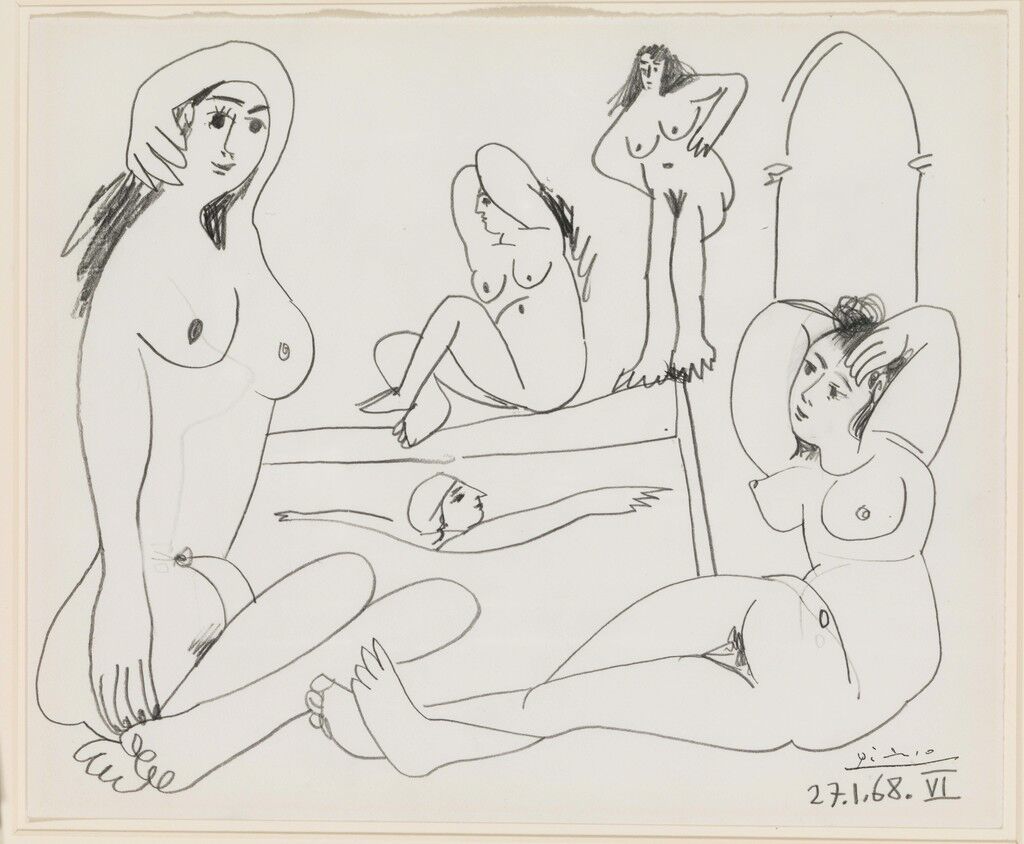 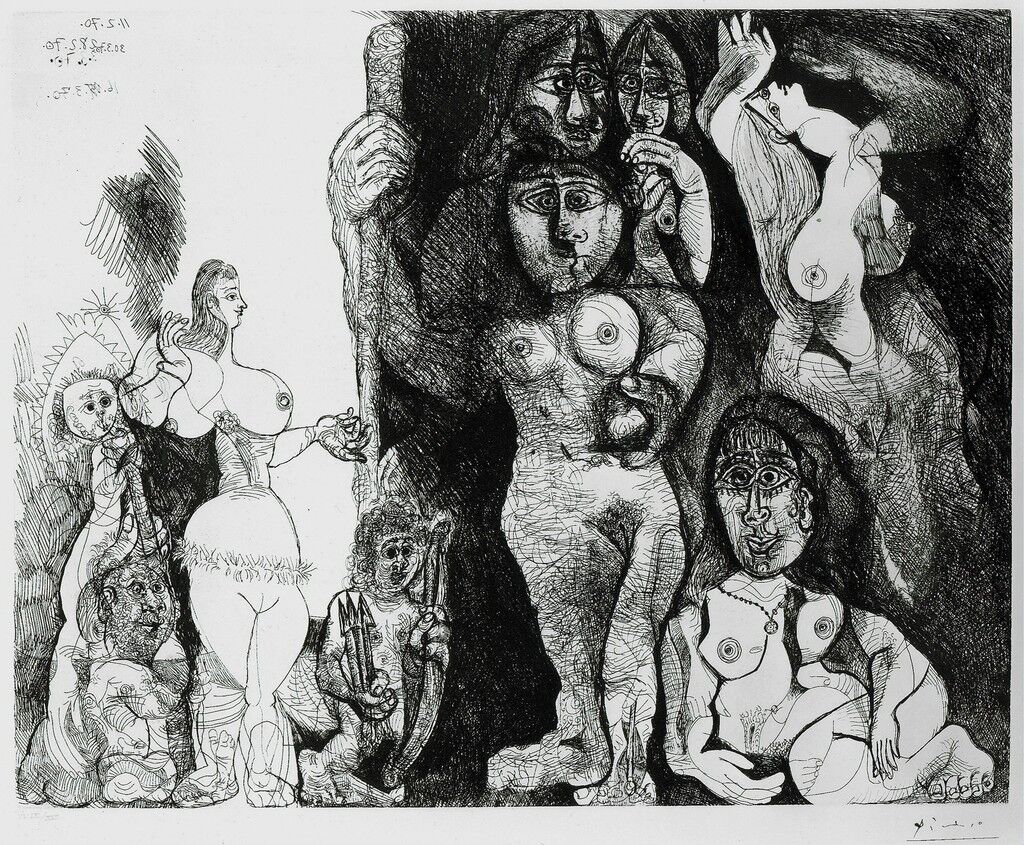 Pablo Picasso
Le théatre de Picasso: Eros et les femmes, 1970
R. S. Johnson Fine Art
Picasso’s penultimate print series hit the newsstands in late 1968, with reporters baffled by their rapid production and erotic content—20 of the prints, in particular, sparked a debate about whether they should ever be shown publicly. Picasso had created 347 etchings and aquatints in just seven months. For comparison, Rembrandt van Rijn produced around 300 etchings over the course of his entire career. Named for the number of works therein, the “‘347’ Series” toured internationally that same year, displayed at Galerie Louise Leiris in Paris, the Art Institute of Chicago, and the Museum of Modern Art in New York.
Describing the series, Picasso said, “I spend hour after hour, while I draw, observing my creatures and thinking about the mad things they’re up to; basically it’s my way of writing fiction.” Fine line drawings of brothel scenes and erotica dominate Picasso’s final print suite, the “‘156’ Series,” which the artist completed within a year of his death in 1973.
—Sarah Gottesman
Explore Koller Auctions’ Prints, Multiples & Photography sale on Artsy, opening June 24th.

A previous version of this article stated that Picasso left his lover Françoise Gilot. It was Gilot who actually left Picasso.
Related Stories