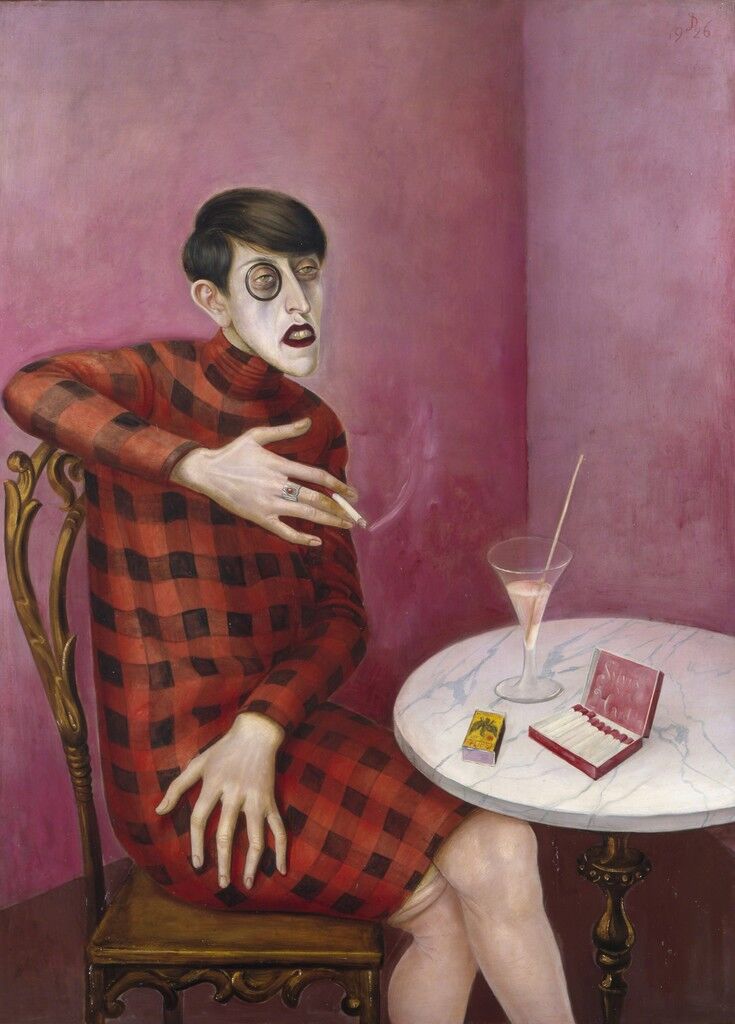 In the 2006 Metropolitan Museum catalogue for the exhibition “Glitter and Doom,” Sabine Rewald describes the moment Otto Dix first spotted journalist Sylvia von Harden. Chasing her down the street, he cried, “I must paint you!”, setting in motion the production of one of Dix’s most memorable Weimar portraits. Von Harden expressed surprise at being a desirable portrait subject, as her features, by her own description, were less than a feminine ideal. It was just this unconventionality, however, that attracted Dix, and he portrayed von Harden as a confusion of Weimar gender signifiers. In an elision of male and female, von Harden wears face powder, lipstick, a cropped and boyish hairstyle, and a boxy dress, hiding any suggestion of figure, with her stockings visible and slightly rolled down—the feminine “mystique” uncovered. In defiance of “appropriate” female behavior, von Harden sits alone in a café and smokes a cigarette, her elongated hands far from embodying a feminine “delicate.” Von Harden also wears a monocle, an accoutrement of the Weimar male “dandy.” Dix claimed von Harden “represented their era,” and thus depicted von Harden as the Weimar “New Woman,” a figure whose “masculine” dress, short hair, cigarette-smoking, and professional ambitions earned her a fetishized role within a popular culture attuned to visualizing its own modernity. However, for all of her overstated signs of “New Woman” progressiveness, the portrait’s unnerving and distorted spatiality and garish colors suggest ambivalence, or at least a more complicated reading of what this “New Woman” really represented. At a time in which debates raged over abortion, a conservative perspective which would ultimately culminate in National Socialist gender roles gaining ground, and the easy integration of the “New Woman” archetype into titillating advertising campaigns, the “New Woman” was, in some respects, as much a myth as it was the actual reality of women in Weimar.