Basel, Tuesday, June 13: Within the current global society of stress and strife, the possibility of art as means of social change, of balm to misunderstanding and beacon for the marginalized, is a very real and powerful thing. Assembled under Markthalle’s cupola dome was perhaps the most mature VOLTA Basel edition yet, with 70 galleries assembling their international artist retinue, many of whom harnessed the challenge to inform and educate as seriously as to soothe and complement. The bustling preview crowd answered with concerted attendance, thoughtful dialogue, and many sales.

“At thirteen we are not fully-fledged adults yet, and VOLTA was always intended to be a contrast to the hyper-bustle, well-heeled, blue-chip offerings across town,” noted Amanda Coulson, VOLTA’s Artistic Director. “So while we have reached a level of polish expected with the longevity of our presence here, nonetheless we still maintain the air of surprise and spirited independence. With the level of appreciation we experienced today, it appears this quality is extremely valued.” 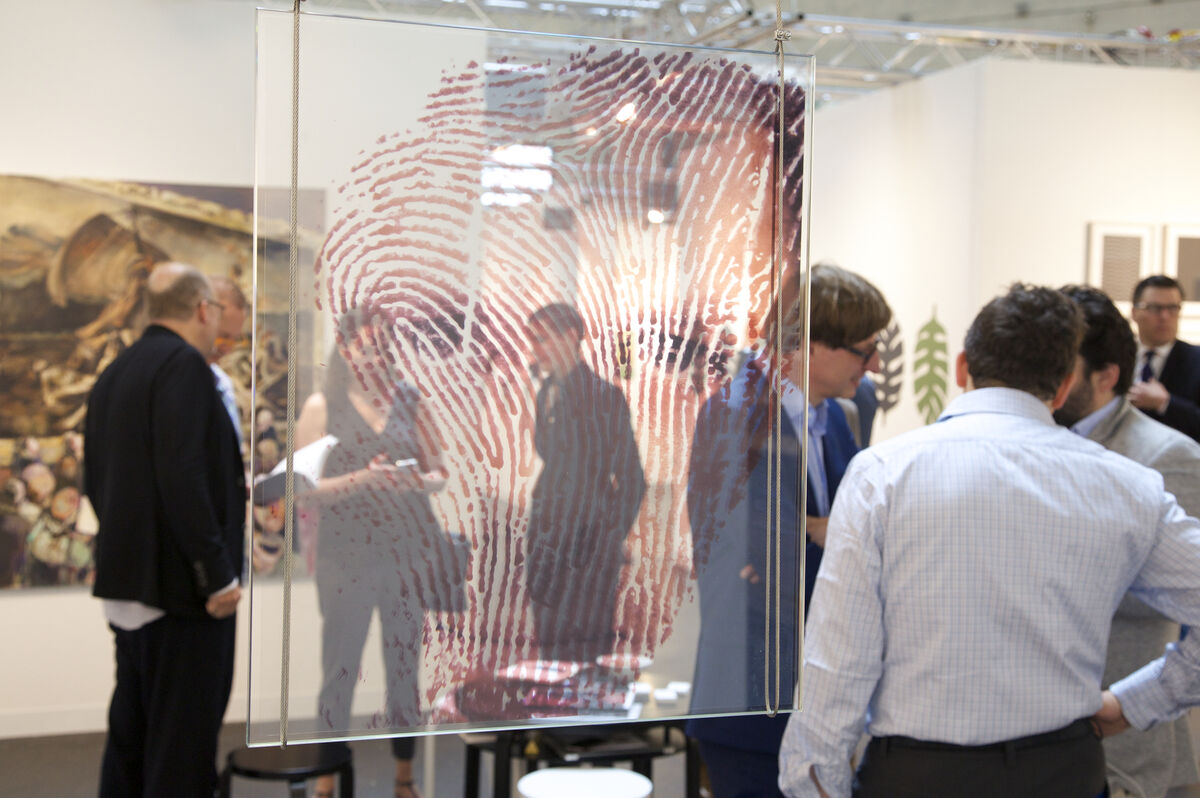 Galerie Kornfeld (Berlin) kicked off with an ambitious two-artist booth featuring Hubertus Hamm’s large-format experimental photography and recent research into “selfie culture”, contrasted by Franziska Klotz’s gestural paintings of fight or flight and fear, with their glaze-like impasto surfaces. Catching himself reflected in Hamm’s Portrait VII (48 Mobiles), an array of 48 blank-screen smartphones, dealer Alfred Kornfeld took in the past hours, noting sales of a Klotz and a Hamm “fingerprint” lambda print between glass plates (18,000 EUR together, approx). “You have to be here to present it,” he said of his team’s efforts during the day, gesturing toward the cupola. The gallery further secured a commission for a 6-meter molded mirror by Hamm, priced at 100,000 EUR. Veteran VOLTA dealer Galerie Heike Strelow (Frankfurt am Main) recorded sales for Starsky Brines’ intense and colorful compositions of cultural conflict within his native Venezuela, which were augmented and reflected back at visitors via Winter/Hörbelt’s massive Pixelbild wheel. Meanwhile, newcomers Galerie T&L (Paris) sold a large-scale diptych from their solo project Tindar’s Migrations series, created by the Italian artist in collaboration with refugees in Calais during Tindar’s months-long relief mission there, to a collector new to the gallery. “We are very happy with the response we have had to Tindar!” proclaimed gallery co-owner Léopold Legros, while coowner Tancrède Hertzog noted that a portion of artworks from the series are being auctioned off to benefit a charity assisting the refugees. The globally attuned “recycled art remix” curated booth by Ethan Cohen Gallery (New York) was noted in opening day press, courtesy local publication barfi.ch. Cohen noted the positive response from guests, particularly the dichotomy of the odalisque refracted through a female gaze (Armenian-American artist Anna Navasardian) and a gay male gaze (New York-based Jeffrey Spencer Hargrave), as well as the reclamation of traditional African mask motifs by Ivorian wunderkind Aboudia and Mozambican artist Gonçalo Mabunda. “People see the connections and they are quite drawn to the grouping,” said Cohen. 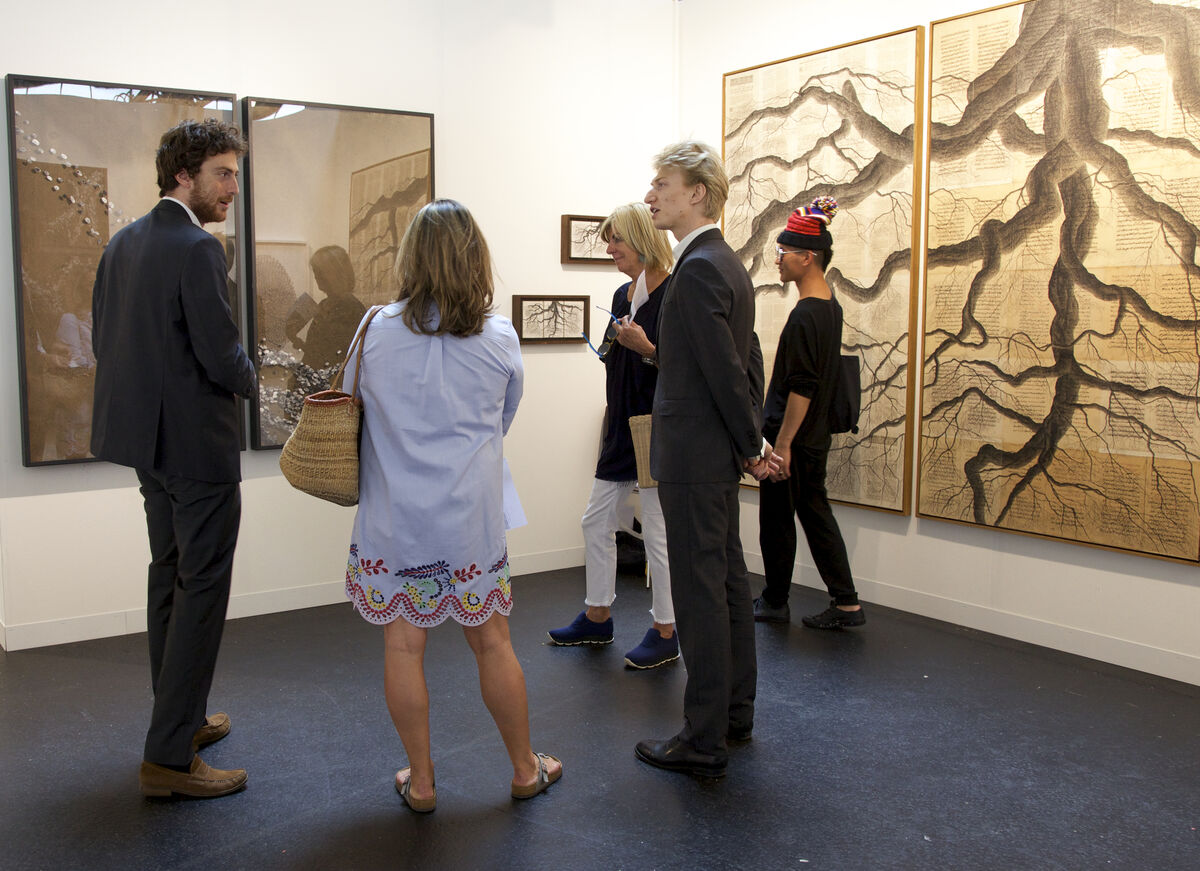 Reconnecting with clients from a season or even a decade ago punctuated the preview hours. Returning to Basel after a fair pause, ZieherSmith (New York) co-owners Andrea Smith and Scott Zieher were impressed. The gallery placed new work from Brooklyn-based Jamaican artist Paul Anthony Smith’s iconic Picotage series in an American museum collection, while they courted interest in Eddie Martinez’s artworks from the past decade, following his international debut via the gallery at VOLTA Basel in 2006. “Plus we’ve met people in the first three hours today who we met 10 or 12 years ago,” Zieher added. Doris Ghetta (of her namesake Ortisei gallery) noted interest in young Romanian artist Leonardo Silaghi’s recent grayscale compositions from collectors who had seen the artist’s earlier “industrial landscape” compositions at VOLTA NY three years prior. As well, she moved Peter Sandbichler’s cast-fiberglass “cardboard box” to a new Berlin-based client. In their Basel debut, Galerie Thomas Fuchs (Stuttgart) was characteristically lively from the word “go”, with dealers Fuchs and Andreas Pucher, as well as assistant Natalie Bergschwinger, fielding requests for artist Jochen Hein’s captivating compositions that tread the line between beguiling hyperrealism and ecstatic abstraction. The gallery sold six canvases early on to old and new clients, of whom Fuchs noted were several who recalled Hein from the gallery’s solo presentation of him at VOLTA NY 2016, “and this is important, to foster relationships between collectors and us.” Stepping back from a deft booth rehanging, Pucher added, “we were impressed by so many fast buys, in spite of the not so low prices! This one —“ he gestured to the tall vertical Haar, which Hein created by painting numerous layers of color before abrading and scratching the surface into sun-dappled hair in closeup — “we could have sold multiple times over. He’s using totally new techniques to convey classical tropes!” 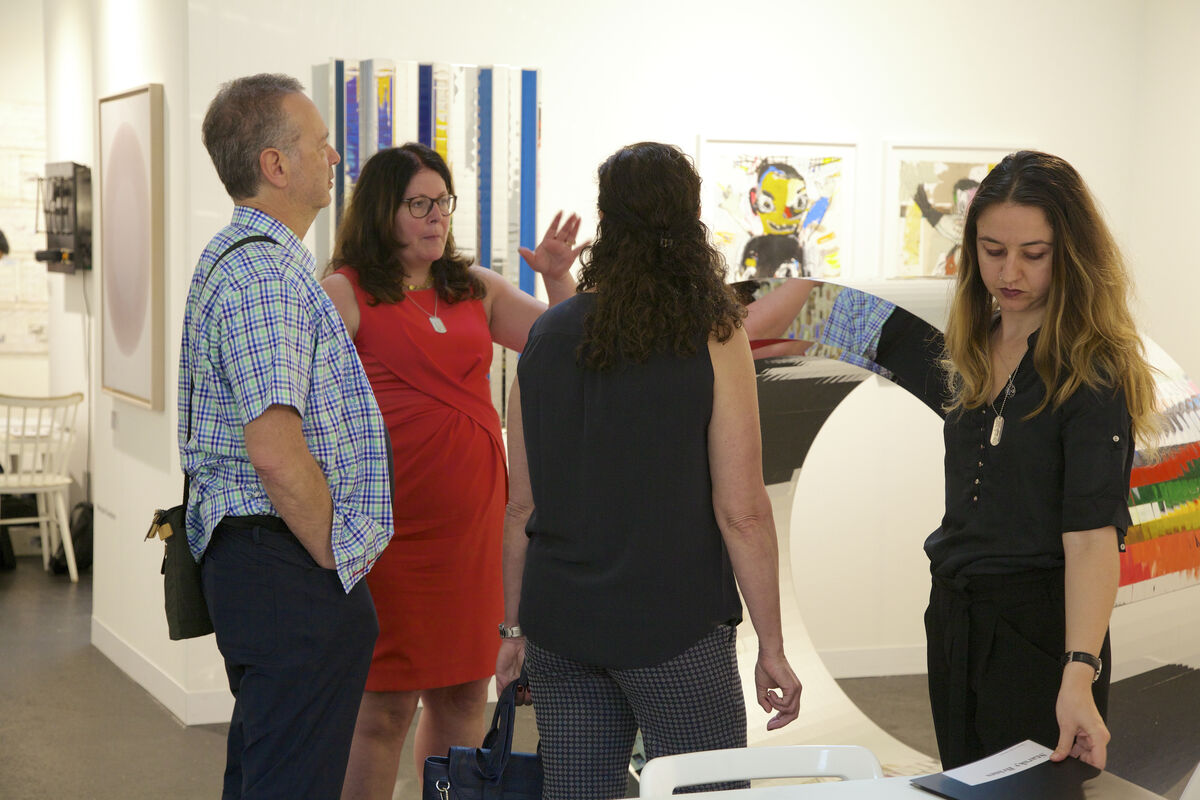 “Visitors can’t ignore this booth,” enthused Roger Katwijk, of his namesake Amsterdam gallery, about artist Niek Hendrix’s ambitious multimedia installation, which involved bright yellow walls and expertly rendered and reproduced paintings in grayscale, including a monumental and macabre rendering of teeth. Katwijk sold works to entirely new clients from Germany and locally, adding, “this is why I do this art fair: to meet new collectors and to give Niek an international platform.” Following their first- time participation in VOLTA NY, Basel first-timers Magic Beans (Berlin) were thrilled with reactions to their fantastical dual-artist dialogue between Italian painter Giuseppe Gonella and Korean sculptor Seungmo Park, as dealer Christian Efremidis recorded strong interest in both artists plus a sale of Park’s statement 3-meter-tall stainless steel mesh sculpture Maya 7655 to a Turkish institution. Across the hall, Gallery MoMo’s (Tokyo) director Momo Sugita was ecstatic about selling the first edition of video artist Tomoyasu Murata’s new stop-action puppet animated film A Branch of Pine Tied Up to a Basel-based private collection. Meanwhile, at VOLTA veterans Tezukayama Gallery (Osaka), meditating between strong presentations of Satoru Tamura’s emotive machines and Moriyuki Kuwabara’s decades of minimalist compass compositions, Prague-based artist Tets Ohnari rang in the day with an activation of his own: deftly tapping a pane of glass to “activate” it and complete the two-pane work blink. “I am feeling deeply encouraged and emotional,” Ohnari commented after the seconds-long performance, reflecting upon his time in Czech Republic, his establishment in the contemporary art scene at home and in Japan, and finally his journey with colleagues to this Basel edition. “I am really happy about it.” 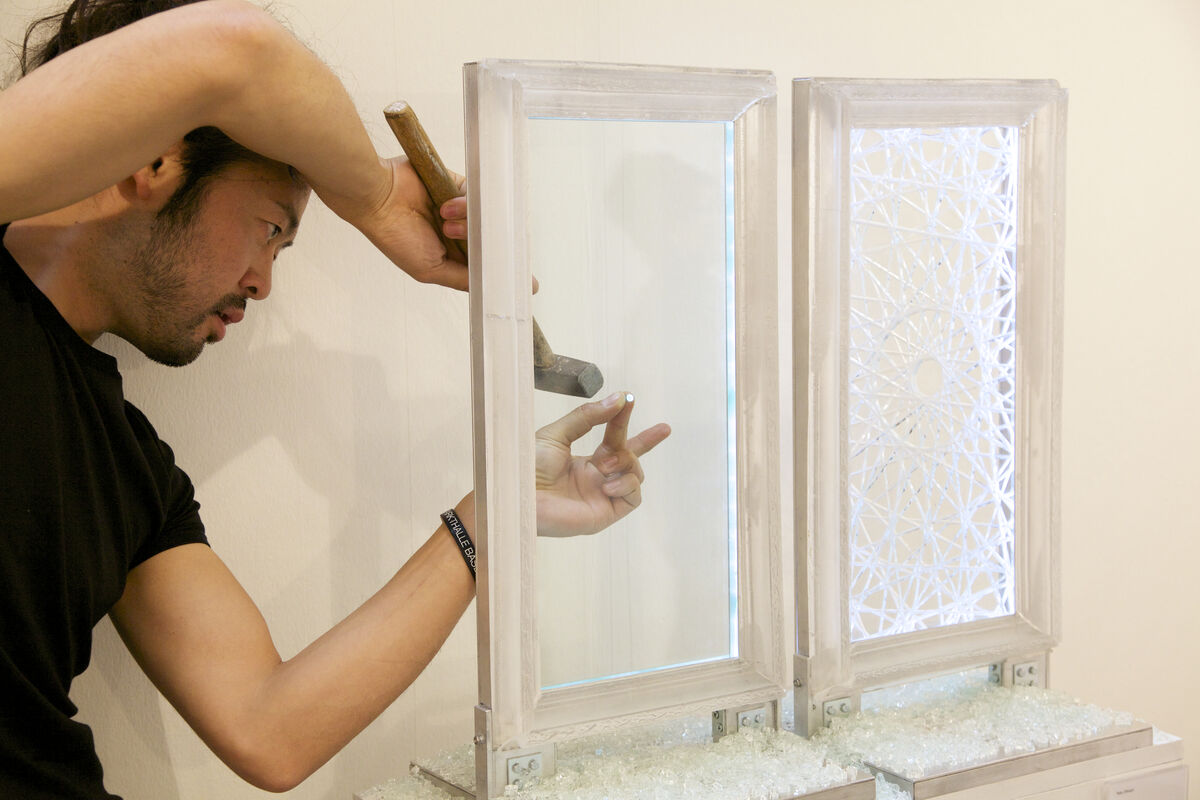 Tets Ohnari (exhibiting with Tezukayama Gallery, Osaka) sets up his performance action blink, which in an instant will crack the glass pane to “activate” and complete the piece; Courtesy VOLTA13

“I’m delighted with one of the best opening days I’ve ever experienced,” said Zavier Ellis, owner of Charlie Smith London (London). Mounting the ambitious group booth Interiority, Ellis noted “We’ve sold nearly 30 pieces by 6 different artists to major collectors and curators, including existing contacts as well as new introductions.” Nearly half the sales went to Emma Bennett (following the gallery’s success with her at VOLTA NY 2017) and to the unrelated but still incredibly talented Kiera Bennett, a more recent addition to the gallery’s roster. Meanwhile, Guido Maus (of Maus Contemporary, Birmingham) was a constant bolt of energy all day, directing guests through his museum-style dualartist dialogue between eminent Japanese minimalists Akiko Mashima and Yoshishige Furukawa. Of the latter, whom Maus first presented at VOLTA Basel last year, came early returns, with Maus selling a monumental painting from 1963 (marking Furukawa’s transformative time leaving Japan for New York) to Germany, while placing other compositions to American, Dutch, and Asian collections. Noting visitors’ reactions to his booth and the artists, Maus commented: “There is a beauty in the fact many non-Japanese don’t automatically realize Mashima is a woman. Her level of quality stands alone. She’s better than to be perceived as simply Furukawa’s wife” — as the artists were married for decades, before Furukawa’s death in 2008, and enjoyed complimentary though individual artistic careers, — “or simply a female artist. That’s all purely anecdotical and does not inform her work.” Maus added that he will open a solo for Mashima this autumn at the gallery, marking her solo return to the U.S. in close to 15 years. VOLTA mainstay Martin Kudlek (of his namesake Cologne gallery) noted interest in all his artists on view, particularly Sofie Muller’s brand-new alabaster heads, plus he sold the multivolume entirety of Christos Venetis’ detailed pencil renderings on old book covers. Next door at Patrick Heide Contemporary Art (London), the mood was even more bustling, with Heide and gallery director Katya Somerville tracking sales for David Connearn (the six-part hyper-detailed ink composition Para (Landscape) and Thomas Müller to a Detroit collection, as well as a frosted glass and steel Reinoud Oudshoorn sculpture and an Andy Harper painting. Another familiar “Patrick” VOLTA gallery, Patrick Mikhail from Montréal and Ottawa, recorded much attention for their thematic three-artist dialogue INTERCONNECTION, selling two of Thomas Kneubühler’s large-format high-Arctic landscape photographs (15,000 CAD) to a London private collection as well as one of Natasha Mazurka’s embossed bioinformatic compositions to a new Swiss client, “who called it just ‘love at first sight’”, added Mikhail, building upon Mazurka’s major solo presentation in New York this past March. “It’s the zeitgeist of the day!” he proclaimed, noting the consideration international attention to Amy Schissel’s multi-part wall installation of compositions that map digital communications. 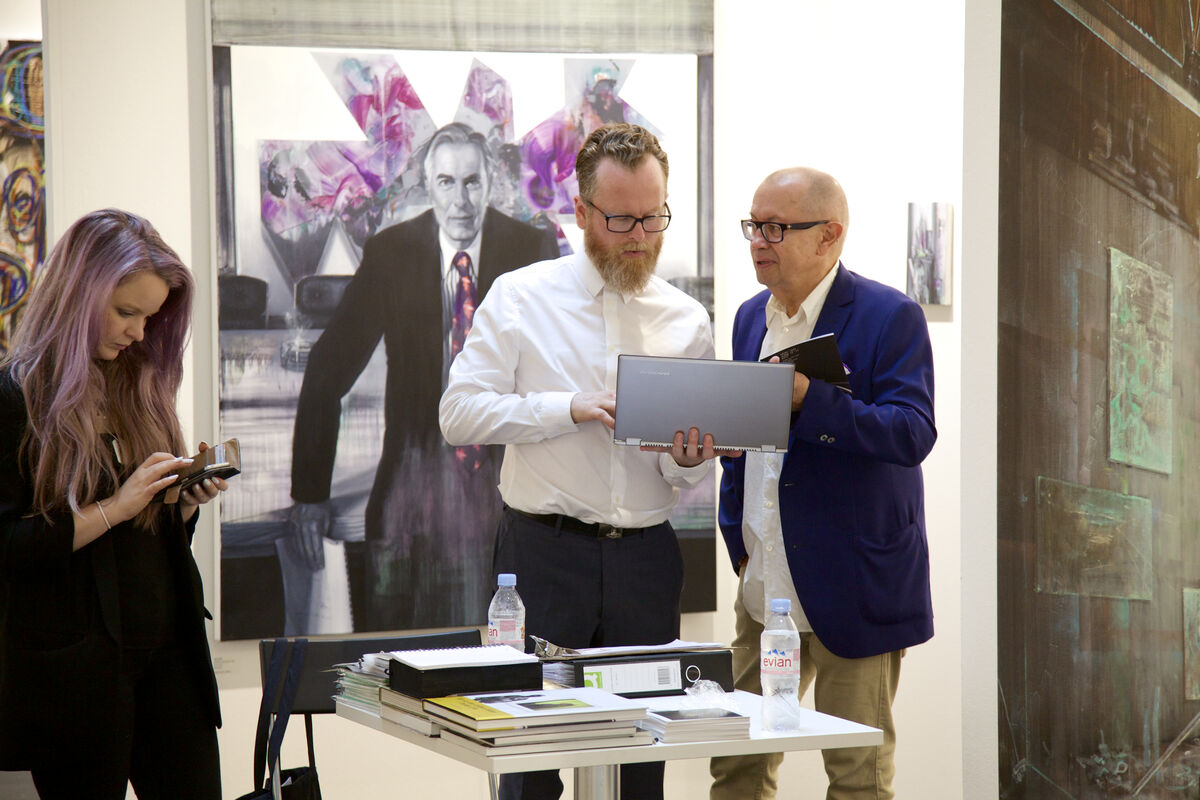