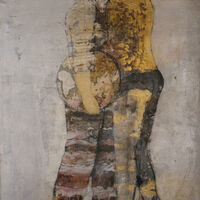 Adel El Siwi (Beheira, 1952) studied medicine and Art at Cairo University between 1970 and 1976. In 1980 he moved to Milan, Italy, where he lived and worked for a decade before moving back to Cairo. The prominent artist, doctor, and translator has taken part in several solo and group exhibitions In Egypt and abroad. His work was exhibited many times at Mashrabia Gallery of Contemporary art in Cairo, as well as several galleries in also in Egypt and internationally. He has represented Egypt at the Sharjah Biennale and the Venice Biennale. Several private collections and museums hold his acquisitions, such as: British Museum, The Guggenheim Abu Dhabi, IMA in Paris and Mathaf Doha in Qatar.