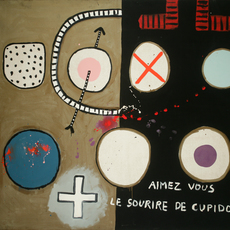 Alan Davie was born in Grangemouth in 1920. He studied at Edinburgh College of Art, working initially as a jazz musician. Influenced by Klee and Picasso, he developed an ornamental style, illustrating his preoccupations with Zen Buddhism, Indian mythology and magic. Declaring that the spiritual path is incompatible with planning ahead, he has attempted to paint as automatically as possible.
From 1953 to 1956 Davie taught in London at the Central School of Arts and Crafts, where he became interested in African and Pacific art. As early as 1958 Davie emphasised the importance in his work of intuition, as expressed in the form of enigmatic symbols. These symbols have combined to make him one of the most potent image-makers in post-war British art. Davie died in 2014.