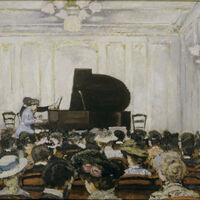 View all works
Career highlights
Group show at a major institution
The Museum of Modern Art (MoMA), and 1 more
Included in a major biennial
Venice Biennale National Pavilion, and 1 more
See all past shows and fair booths
Bio
Submitted by Stoppenbach & Delestre

Albert André, the well-known Post-Impressionist artist and painter of ‘intimiste’ interiors, still lifes and Parisian scenes, was born in Lyon in 1869.

Aged twenty, he left for Paris where he studied painting at the Académie Julian. On the same course, were Louis Valtat, Maurice Denis and Pierre Bonnard. Like them, André began painting in a Post-Impressionist manner, using colours, light and subject matter in a similar way to the mainstream Impressionists but André added more expression and design. At the beginning, André's works were close in colouring and subject to the Nabis painters, Vuillard and Bonnard, but quickly, Renoir became his major inspiration.

By 1918, André had written a monograph on Renoir, the first by a Frenchman during Renoir’s life. He went on to organize a retrospective of Renoir’s work in 1921, at the Durand-Ruel gallery, three years after the artist’s death.

He returned to Paris in 1947 where he died on July 11, 1954 at eighty-five years old, just before the opening of an exhibition of his works at the museum of Avignon. The Salon d’Automne organized a retrospective of his works the following year.

The works of Albert André are represented in many important museums, including, the Museum of Modern Art, New York, the Chicago Art Institute, the museums in Philadelphia and Washington DC, and the Musée D’Orsay in Paris.