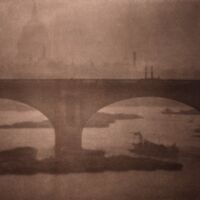 At the turn of the twentieth century, few figures cast as large a shadow across the landscape of photography as Alvin Landon Coburn (1882 – 1966). In a career that spanned six decades – he began photographing at eight years of age – he was one of a handful of leading pictorialists who successfully shifted his focus to the more modern approach that emerged following the demise of the Photo-Secession. Advocating the “new”, his career rode the progressive ride of abstraction, mysticism, and symbolism that marked the modernist era in the visual arts.
Coburn was a meticulous printer, mastering many varied processes. His continuous searching for techniques to convey his unique vision led him to be one of the firsts to successfully combine the rich tonalities of the platinum process with the subtle colour of gum bichromate. He applied his mastery of these processes to a diverse range of subject matter, enabling the distinct attributes of a particular media to inform and support the poetic intent of his subjects.
In 1912, Coburn immigrated to England and settled in Wales, eventually becoming a British citizen. His role in shaping the expanding dialogue of art photography achieved greater international recognition as he travelled, photographed, and exhibited in the United States and Europe. In his life and work, he drew close associations with innovative art groups, including Vorticism, Cubism, and Futurism, that were challenging the timeworn pictorial conventions of the day. Inspired by these groups, Coburn helped to usher in a new pictorial language in modern photography, as in his memorable Vortographs. It was a language based not on representation but on evocation of spiritual values through abstraction and symbol.
— Therese Mulligan, Ph.D. Curator of Photography, George Eastman House