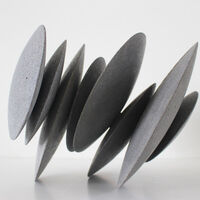 Anachar Basbous was born in 1969 in Rachana, a village of open-air sculpture, in a family of artists: his father, Michel Basbous, was a sculptor, and his mother is a writer and poet. He made his first sculpture at the age of 10 years.

He completed his secondary studies in Beirut; then he went to Paris to continue his studies at the ENSAAMA (Ecole Nationale Supérieure des Arts Appliqués et des Métiers d’Art) where he specialized in architectural wall design.

His works of art are spread in Lebanon and abroad, in public places, hotels, private residences, and gardens. They are created according to the study of the site, the character, the personality, and the history of its locations.

He collaborates with several architects to achieve some projects made-to-measure.

His sculptures appear in many private collections as well as in public places in Lebanon, the UAE, France, United States, and Canada.

Anachar Basbous works and creates at his workshop in Rachana where he lives.