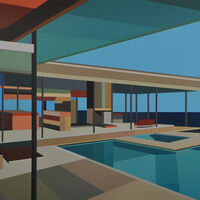 London-born artist Andy Burgess, currently residing in Tucson, Arizona, is known for his renditions of modernist and mid-century architecture, panoramic cityscape paintings, and elaborate mosaic-like collages made from collected vintage papers and ephemera. Burgess continually expands his artistic vocabulary by mastering various media, most recently immersing himself in photography and printmaking.

In January 2012, Burgess had his first museum exhibit Paper City at The University of Arizona Museum of Art. In 2014, Burgess had his first solo New York exhibition at Site 109. In 2016, he was invited to collaborate with master printmakers at Tandem Press in Madison, Wisconsin to develop a body of work in various printmaking media. In 2018, Burgess opens the year with a solo exhibit, Mid-century Perspectives, at the Tucson Museum of Art, and also announces the publication of his first monograph Modernist House Paintings: Andy Burgess by Nazraeli Press.