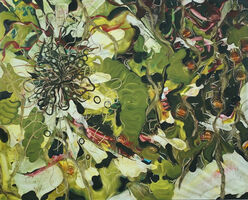 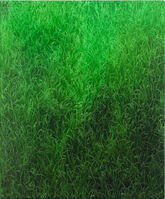 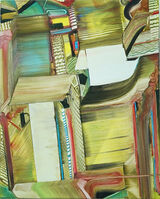 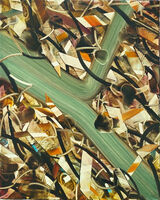 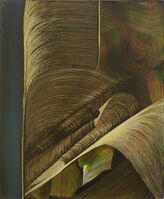 Andy Harper's meticulously painted tableaux, often done in deep earth tones of brown, orange, and umber, resemble moody tapestries. Working in oil on either canvas, linen, or aluminum, Harper paints organic matter—leaves, seed pods, stems, bones—from varying perspectives. In some he assumes a taxonomic distance, rendering forms in symmetrical patterns, as though arranged for study. In others he has a bug's-eye view: the viewer is immersed in twirling stalks, while leaves fan out to the side. Equally sensuous and morose, such works balance the fertility of plant life with the impending reality of decomposition. Harper achieves much of this dichotomous effect through his contrast of light and dark: in God Particle (2008) keyholes of luminescence are surrounded by panels of darkness, like a sun in partial eclipse.