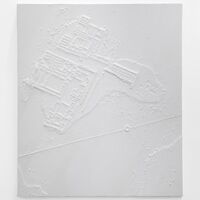 Anne et Patrick Poirier (Marseille and Nantes, 1942) study at the École Nationale Supérieure des Arts Décoratifs and after several trips between the East, the Middle East and the United States, they win the Prix de Rome and live at the French Academy of Villa Medici, Rome, from 1976 to 1971. Multidisciplinary artists, authors of sculptures, casts, photographs, artist’s books, installations, they merge their ideas together, placing time at the center of their work, the reflection on violence in history, the fragility of human cultures and the related forms of transmission. Memoriaè is recognized as a crucial element for the protection of the individual, and is often opposed to contempt, violence and intolerance, realities that originate in the destruction of memory itself. The works of the 1970s linked to archaeological sites, contemporary or imaginary, follow monumental works in marble, bronze and steel; the large photographs and complex installations of the 1990s still underline the theme of the ephemeral, fragility, and the importance of remembering. The artistic investigation becomes a real approach to human sciences and history, and leads them to work all over the world. In fact, they exhibit in prestigious venues, in Italy and abroad: we remember Musée des Beaux-Arts, Bordeaux; Art Institute of Chicago; Los Angeles Institute of Contemporary Art; Centre Georges Pompidou, Paris; Kunsthalle, Berlin; Centro per l’arte contemporanea Luigi Pecci, Prato; The Brooklyn Museum, New York; The Getty Research Institute, Los Angeles; Musée de l’Élysée, Lausanne; MACRO, Rome; M.O.M.A, New York; MAMC, Saint’Etienne; Skulpturenpark, Wuppertal; The Parkview Museum, Singapore; Domaine de Chaumont-sur-Loire; Maison Européenne de la Photographie, Paris. They take part in the Venice Biennial in 1976, 1980, and 1984; in Documenta, Kassel, 1977; at the Istanbul Biennial, 1987; at the Lyon Biennial, 2000; at the Busan Biennial, 2002; at the Valencia Biennial, 2003, at the La Havana Bie