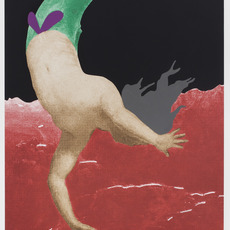 Annette Messager is a celebrated contemporary French installation artist. Working in a conceptual and feminist practice, Messager examines conventional perceptions of women by individuals and by society at large. Her early pieces focused on domestic objects such as textiles, toys, and found objects, and her through her later work she has continued to question the feminine and masculine. “At first, I felt proud when someone said, 'Your work looks like a man did it.' Then I realized that was stupid,” the artist once quipped.

Born on November 30, 1943 in Berck, France, Messager received her formal training at the École des Arts Décoratifs in Paris. In 2005, she won the Golden Lion Award at the Venice Biennale for her installation which transformed the French pavilion through a variety of moving sculpture, notably including Casino (2005), in which a wind machine creates waves and ripples in a large red silk sheet amongst strange creatures and forms. She has also had solo exhibitions at the Museo de Arte Moderno in Buenos Aires, at the Musée d'Art Moderne de la Ville de Paris, and a retrospective at the Centre Pompidou in Paris. Messager currently lives and works in Malakoff, France.