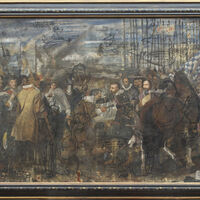 Armando Romero is a Mexican painter who studied at the National School of Painting, Sculpture, and Engraving "La Esmeralda", in Mexico City. From 1991 to 1997, Romero taught sculpture, painting, and Art History in La Esmeralda.

In addition, from 1991 to 1993, Romero taught art history, design, and drawing at the University Center for Studies in Science and Communications of Mexico City, and also in 2002, he taught painting at the School of Visual Arts in Michoacán, Mexico.

In 1998, Romero represented Mexico in the exhibition of Emerging Artists of Latin America at the Passage Gallery in Retz in Paris, France, and in 2001 he gave a lecture on sculpture and participated in the International Study Program of the National Foundation for Advancement in the Arts in the United States. Romero, a neo-eclectic painter, combines his versions of historical paintings by artists such as Caravaggio, Rembrandt, Goya, and Bosch with irreverent contemporary images, which allow emotion and freedom. Armando Romero, also a sculptor, has led Mexican art.