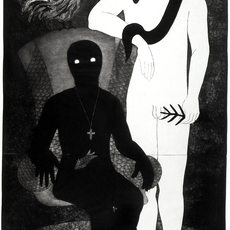 Belkis Ayón (1967-1999)
The works of Belkis Ayón is a reflection of the myths and the traditions of the Secret Society of Akabùa, and African society which involves spirit possession of its members. She uses her own imagination to create an imagery for the unseen deities and spirits. Though she was a woman and thus banned from membership, the intensity of her images and details in her iconography reflect not not only a supreme talent as an artist, but an equally intent dedication to reflecting the importance of African images and culture in Cuba. The imagery also reflects world of silence and mystery: transformed figures retain their human form and at the same time speak to a philosophically existential approach to the human condition. The work of Belkis Ayón has been exhibited in galleries and museums throughout Europe, Japan, the U.S. and Cuba since 1988. She was an artist in residence as well as a visiting professor at RISD in Rhode Island in 1999 shortly before committing suicide a year later.