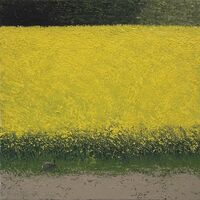 Benoît Trimborn was born in 1976 in -Strasbourg in France. He studied architecture in parallel with music studies at the Strasbourg Conservatory. He devoted himself fully to painting from 2010, giving up his activity as an architect. He was first represented in French, Swiss and Belgian galleries, then in the United States in New York and Boston.
His works are only interested in landscape and domesticated nature. Contemporary impressionist, he invites contemplation. The calm and sobriety of his paintings contrast radically with the effervescence of the world and transport us to a serene universe, a privileged moment where time stands still.
"The morphology of the landscapes, or more essentially, the space drawn by the countryside, catches my attention, and seems to be like the spark of research. Like an architect, I see in it a breath, a light, a rhythm, which alone can constitute a principle of beauty. So these places in the countryside lead me to painting, they cross the seasons, but also weather and agricultural variations ... I then imagine the passage between the space of the countryside and the space of the canvas.
The elements represented compose atmospheres of which I try to faithfully convey the impression, as the musician faithfully follows the score. In this process, the contemplative attitude prevails, much more than the adventurous attitude. No message, no story should disturb the projection of the viewer ... ”